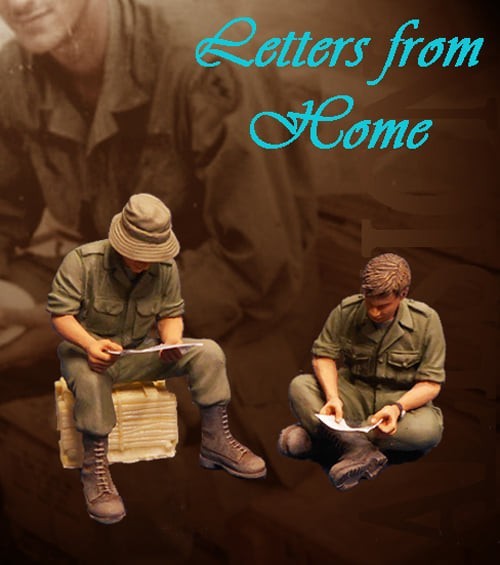 Reminds me of this old ad - https://www.youtube.com/watch?v=CD6S8DZHpG4 -

Lots of very said Dear Johns were recieved over there , me included .

The uniform details are wonky. Boots have early vibram soles (no problem there) but the side seems are wrong. The number of eyelets is more befitting jump boots than jungle boots.
The uniform shirt details will need rework as well. Pockets are not slanted as per BDUs. If left alone the epaulettes were not the norm on fatigue shirts for enlisted personnel. Otherwise slanted pockets need to be created. Epaulettes were present on early issue BDUs.
All this is assuming the figures are American.

The company is from Down Under and usually produces Australian figures. I don’t have precise info about this set of figures, but I think these miniatures represent Australian soldiers from Vietnam.

Yeah they look like Australian uniforms to me also.

Uniforms look correct for Australian troops. Vietnam war has room for a lot of variation in uniforms, weapons and vehicles. I was there in 1970, and remember the Australian troops using M16’s, FN’s, M60’s and M1917 Brownings. Their special forces guys (SAS?) used all sorts of small arms. Guard units in some US base camps still used M14’s. In II Corps, I recall seeing South Korean troops (White Horse insignia), they also had a mix of weapons including M1 and M2 Carbines, don’t recall what their LMG’s were. They wore a variety of uniforms, OD and cammo, and I remember them as being very disciplined. ARVN units carried a mix, some M16’s & M60’s, others M1 Garands, carbines and Browning LMG’s. I even recall seeing one poor guy lugging a BAR, that’s a big weapon for a small soldier. M41 tanks were common in ARVN units, M113 and even M114’s also. US units I saw used M48’s, M113’s, M42’,s M551’s, MP’s used various V100’s for road security. Vehicle colors were all over the map, I have photos of vehicles ranging from and almost Green/Black to a greenish Khaki color. The sun, dirt and variety in paint made for a lot of colors.