Looking for US Army Bumper Codes

For the M88A1, I am guessing it would be something like 3-2-33 [Division, Battalion, Regiment] on the left side, facing the front of the tank and then HQ??? on the right side. But, I am clueless as far as the M151 goes. I would suspect that the left side would be similar to the M60A3 and M88A1, but I have no clue what would be on the other side.

If anyone can help a newbie out with this, I would appreciate it.

Try PERFECT SCALE MODELLBAU ( PSM ) in Germany.
They have bumpercodes in large and small size.

You are correct about the left side bumper numbers. They would be the same on all three vehicle; all the vehicles in the Bn actually. The right sides would be slightly different for each vehicle.

Blade tanks of this period (in a tank BN) belonged exclusively to the company XO, therefore the bumper number on the right side as you look at the tank (or drivers left) would be company letter (A-D) -65.

Thanks all for the help. And yes, I will be building a M151A2 (actually, it will likely be first one as it is small, and we’re in the process of moving). I had found the Academy kit with the hard top and trailer a few years back and stashed it away in the back of the closet for times like this.

For the unit markings on the right front there is a triangle (indicating an armor unit) between the 3 (division) and 2 (battalion) markings with a dash between battalion and regiment as you indicate. The M88s were numbered, in the three battalions/squadrons in which I served from 1975-87, were as follows: Tank companies: A-88, B-88, C-88, and after reorganization from H-MTOE to J-MTOE (tables of organization), D-88 was added for Company D. The two M-88s in the Battalion Maintenance Platoon were HQ-88 and H-89. The listing HeavyArty list for the 1/4-tons is generally correct with a couple of changes for mid-late 70s and very early 80s (dependent on MTOE in use). Within the tank companies the two M151A2s were HQ-6, as stated by HeavyArty and HQ-5 for the XO/1SG. If the M88 in your dio is to be from a tank company, then most likely the 1/4-ton will he A/B/C/D-5 and later when the battalions added a Civil Affairs (S-5) , A/B/C/D-5 became -7 as stated by HeavyArty.

Try PERFECT SCALE MODELLBAU ( PSM ) in Germany.
They have bumpercodes in large and small size.

Do you know the difference between large and small (both sets are 1/35 as far as I know) ?
I need some bumper codes for a M113.

Here’s a good photo of the bumper codes from a sister battalion. Don’t forget the triangles to designate the armor division and regiment. 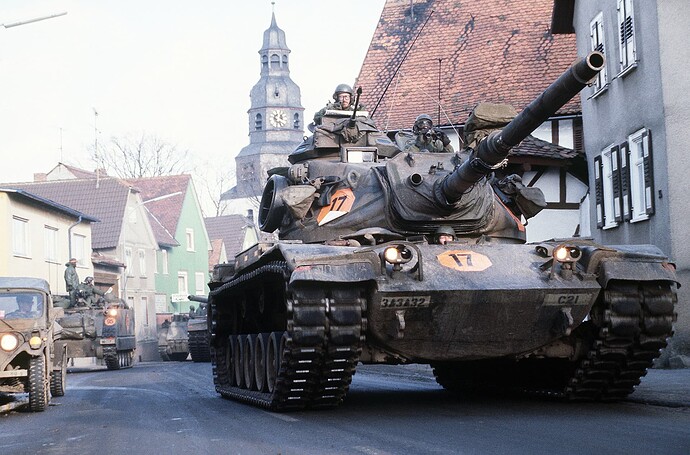