M1A1 - Dragon kit with the DS tracks. Bob Burik provided assorted TA50 and other gear to throw in the bustle rack, and a bunch of references to build the replica. I built the map board, antennas are from from fiber optic line, added spent brass and links, phot-etch straps here and there, and wood grain decaled Tac sign on the back of the bustle rack. My buddy Will helped out on the figures. 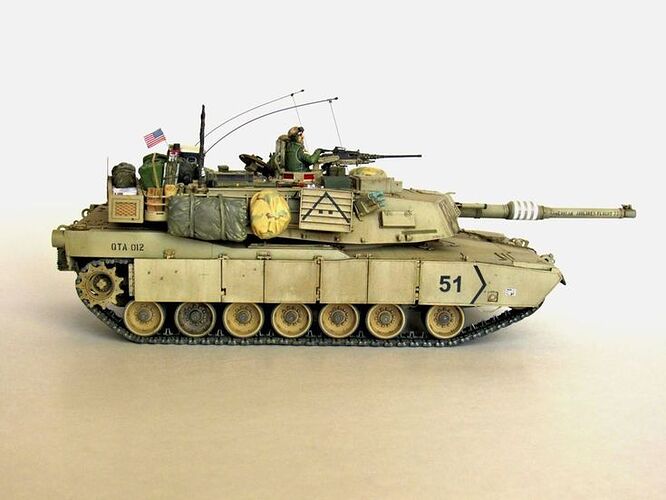 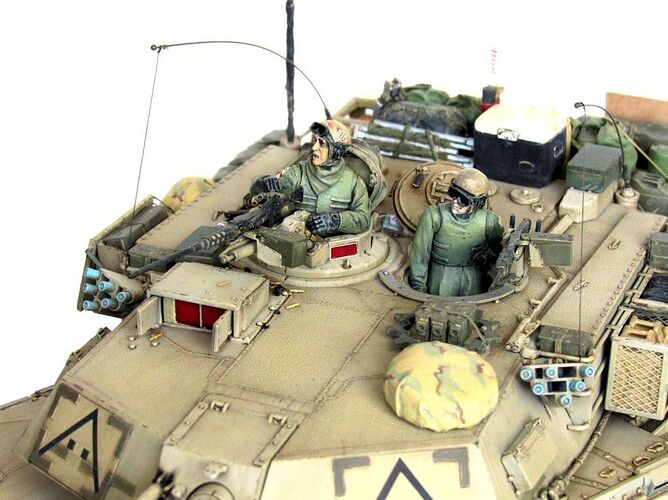 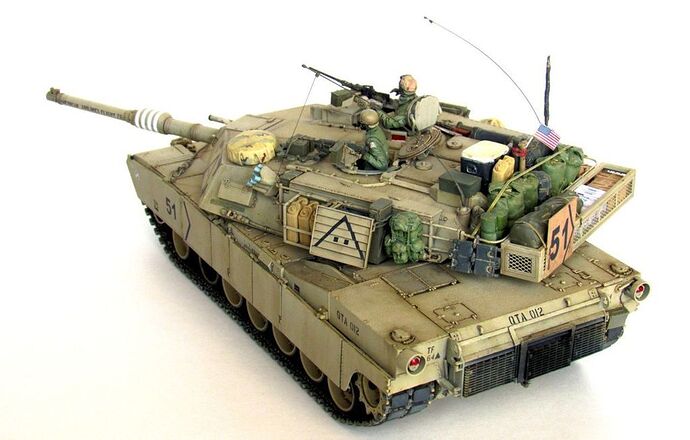 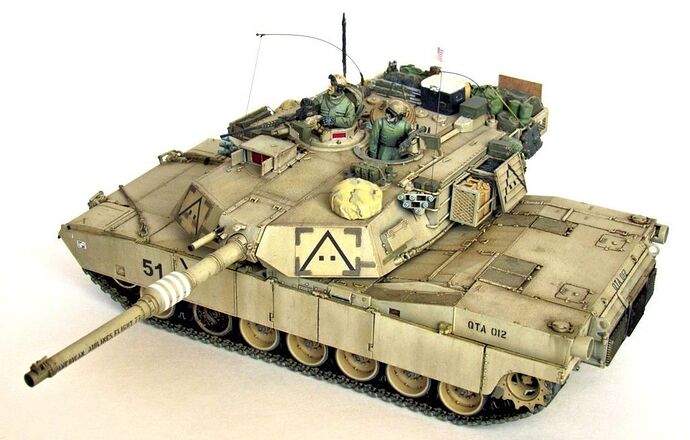 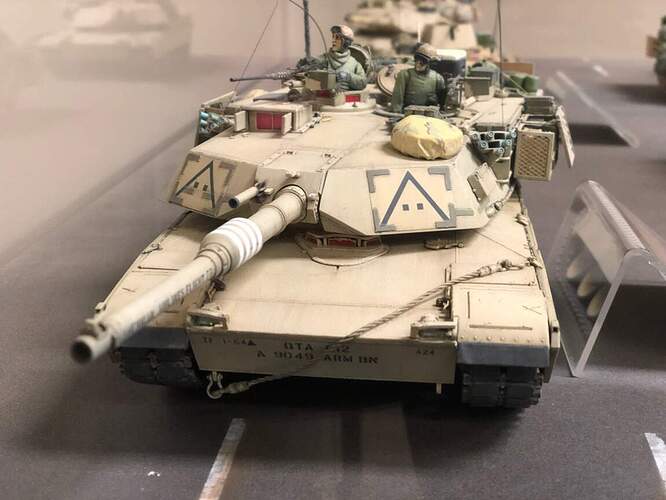 Very nice build there. And some really neat detailing on the turret. I have heard others mention they built stuff for the thunder run, now I know about the Thunder Run, but what museum do these builds go into ? I’m guessing it’s for the Armd Regt or is it a Div museum and are there pictures of it ?

If I’m not mistaken it’s at the Ft. Stewart Museum in Georgia.

Thanks for pointing that out. I added info.

Thsnk you for the compliments. The museum is at Ft. Stewart, GA.

Great job. Looks good. I remember it from the Facebook page for the museum build.

I think it is a few vehicles in front of my BFIST I built for the 3ID Museum display as well. 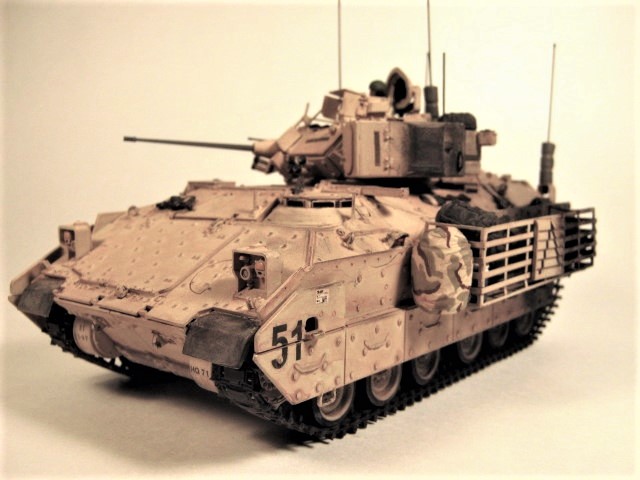 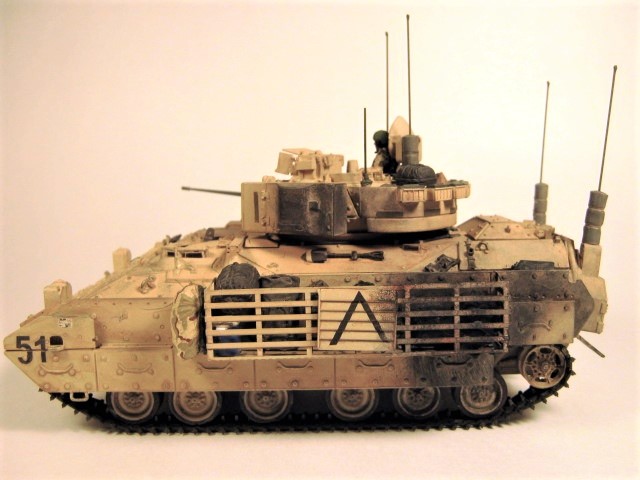 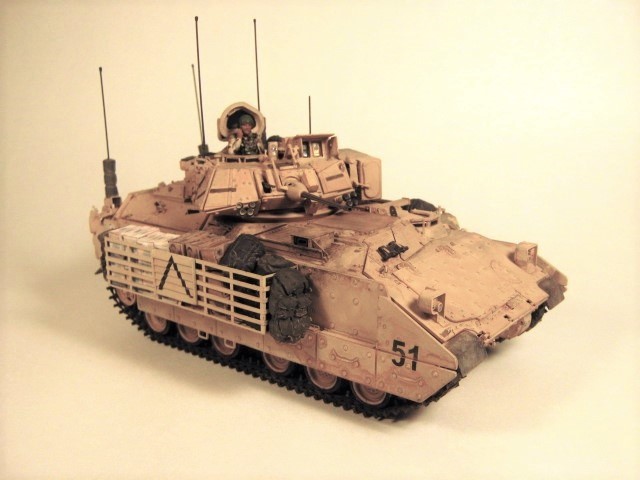 Yes, I remember yours. Great work!

Alpha23, very nice Abrams, sir! I was fortunate enough to be able to build 2 Abrams tanks, and 1 Bradley, for the Ft. Stewart Thunder Run exhibit. It was a very great honor to be allowed to do it, and your tank will fit in very, very well!

The exhibit is located in a relatively new training facility at Ft. Stewart. There are pictures of the exhibit on the Facebook page, but that page is a members only page. You can certainly request membership, given that you are one of the contributors. When I first got involved, I didn’t know the ‘format’ of the exhibit, but I know now. Each modeled AFV is included, as far as I know, in the order that the vehicle was in the armored column during the Thunder Run. There are about 6 AFVs sitting on the simulated asphalt of the highway the column used on its way to the airport, under glass or plexiglas covers around the perimeter of one of the training classrooms, and, obviously enough highway bases to allow for all the AFVs, and each AFV has a large poster on the wall above its model, describing the vehicle, with photos of the actual vehicle and photos and descriptions of the model, and each model has a small card right next to it with the name and/or ID of the AFV and the modeler. It’s a very cool setup!

Thanks for the kind words. As a former tanker in 3ID and 64th Armor alumni (3-64 in Germany) I would love to go see the museum. Some of my coworkers have stopped by on there business trips and took photos. I hope to get out there one day.