Hi all! Looking through Library and Archives Canada, I found this photo of an M10 which was described as being part of the Ontario Regiment RCAC in Italy, July 1944. I’m not sure if this would likely have been an actual part of the tank units, or would it perhaps be from an attached artillery unit? When I colorized the photo, the crew’s berets were black. 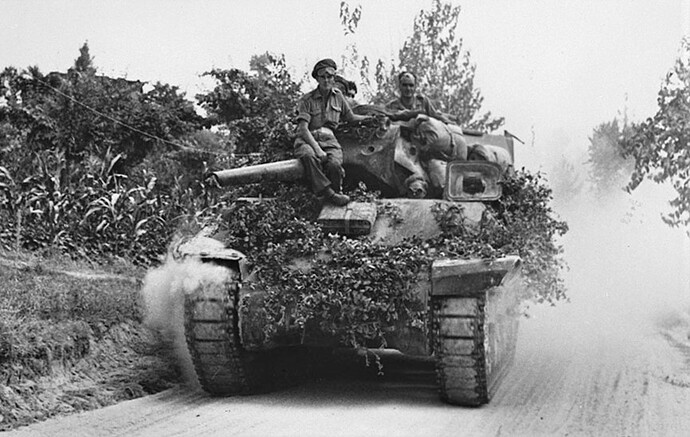 Any thoughts on what this M10 is doing in a tank regiment? Thanks!

I remember reading recently trying to help Mead with his Archer that the M-10s were attached to Armoured divisions and the Archers to Infantry.

Im almost positive they were crewed by RCA though in AT Rgts. I can’t see them being attached organically to an Armoured Regiment. Lemme dig about and see what I have in the library.

As far as I have read this correct. Archers were supplied to Infantry and M10’s to tank regiments but both fell under artillery core. The Archer I am building was assigned to the 3rd infantry but was part of an artillery core. Seems backwards to me since not all archers had Machine guns and the ones that did had them hjad them facing the other direction of the main gun. I would have thought for infantry support youd want something with a MG facing the right direction

I do recall reading that the anti tank artillery in British armored divisions were split between towed and self propelled in the same regiment. With the SP batteries having the M10 in both the 3” and 17pdr gunned versions. Meanwhile the towed AT batteries had the 17pdr along with their prime movers. I’ll see if I can find the link for that information.

I can’t find the actual paper I was reading before. It was a war department document outlining equipment allocation. I’ll keep looking.

I bet that photo has just been miscaptioned though.

Seems backwards to me since not all archers had Machine guns and the ones that did had them hjad them facing the other direction of the main gun. I would have thought for infantry support youd want something with a MG facing the right direction

The MG on SP TDs is there only for self defense of the crew. If you have to use it, it is a bad day. The main guns (artillery cannon) are used to support the infantry as they advance by providing fire support on enemy positions/tanks.

Okay, so let me see if I understand this okay. So for the armoured regiments, they would have the ability to be supported by the spgs, but the M10 in this case would not actually be a part of the Ontario Regiment? Seems odd then that the crew are wearing black berets, or was this common with the anti tank units as well?

One more question, given that this M10 may be “attached” to the Ontario Regiment, would it bear Ontario markings or the markings of the anti tank regiment supporting the Ontarios?

Edit: @Canmedic upon further thought, you probably are correct. Any idea what unit would have been supporting the OTR? 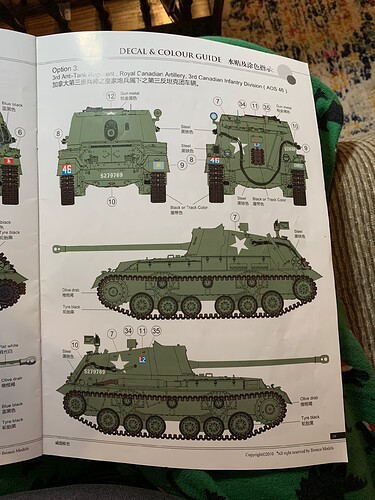 So you need to remember that British/Canadian and US doctrine differed wildly with AT/TD units.

The Americans used TDs as Hunter/Killer units in the offence where the Brit’s/Canadians used them as they would regular towed AT guns just with improved mobility.

M10s and Archers were assigned to regular AT regiments, so for example Mead is building an archer assigned to 3 AT Reg RCA.

I think I’ve figured out the mystery though. The OntRs were part of 1st Canadian Armoured Brigade which was an independent formation and not structured like a regular Division with its usual accompanying support elements.

The ORBAT I have for 1 Armd Bde doesn’t have an attached AT Rgt. So……

Maybe they were attached? You’d need to find more on the history and ORBAT of the Brigade to get that question answered I think.

Here’s the makeup of a standard Armoured Regt. for interest sake.

by Mark W. Tonner The Canadian Armoured Corps was formed, as a new branch of the ‘Active Militia of Canada,’1 effective 13 August 1940. Canadian units converted to armoured regiments, in this new b…

If you go back to the Canadian Soldiers page and click on the link for Independent Armoured Brigades on the Left you’ll pull up 1st and 2nd.

Normally I’d say they were TD’d from a regular AT Rgt and as such would have RCA AOS and Unit markings. That would also put the crew in khaki berets. At this point though, I’m not entirely sure what to think.

Here’s the archived history of 1st Armoured. It’s 3 parts and non searchable, but your answers may lie in there.

(fie art on 0 eratlQns of 1. Odn Armd Re~t, ., 12 to 30 Jun 44) 11 Cdn Arm Regt we’re given command
one battery of S.P. field artillery and two troops of anti-tank guns. The attack was to be supported by the three field
regiments from 78 D1v plus one medium regiment…

Page 4 Part II of the above history. It references the Operations History of 11 Armoured Regt (OntR) so let’s see if we can’t find that document.

There was also a specific mention in Part I of the document of Engineers being poached and assigned to the Bde with individual Coys being jaded off to each tank regiment. So perhaps this was standard practice to augment these units.

This is some great stuff @Canmedic ! I really appreciate you helping me figure this stuff. I’m reading part 2 now.

Edit: Done some digging - I’ll bet money that the M10 may be from the 64th Anti Tank Regiment, which was part of the 78th ID. Look what I found - 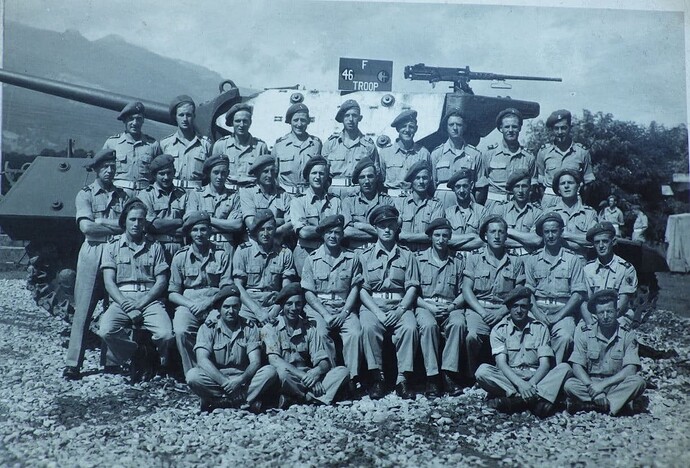 This is one of the M10’s of that regiment. As far as I can glean from the history of the ONTR that you sent me, the artillery was taken from the 78 ID, and the anti tank regiment from the 78 was the 64 Anti-Tank Regiment. I’d say it’s safe then to assume that this is the unit that the ONTR received M10’s from. The only question now, would they have been repainted in ONTR markings? I’m thinking they would not have.

My dream job is getting paid my current salary to sit in the basement of the archives and to this all day.

Also, email the museum. If no one knows there’s probably some documents kicking around over there that would shed light.

No way the Brit’s are repainting anything

Then that solves it! Thanks so much for the help @Canmedic , @Mead93 , and @Stikpusher .

Glad to help out. One tidbit that I read a bit ago here was that the crews being artillery, wore standard uniform colored berets, not the black berets of the tank corps.

To make my “Black Cat Battleaxe” M10 I’m using the new Tamiya kit. Quite nice! I’m actually taking my time with this one, since my exams are forcing me to actually be productive and study for once. I finished the floor of the fighting compartment tonight. 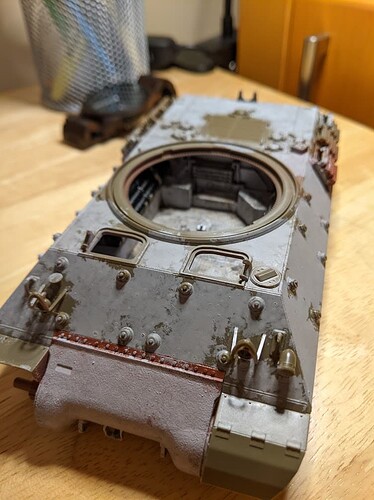 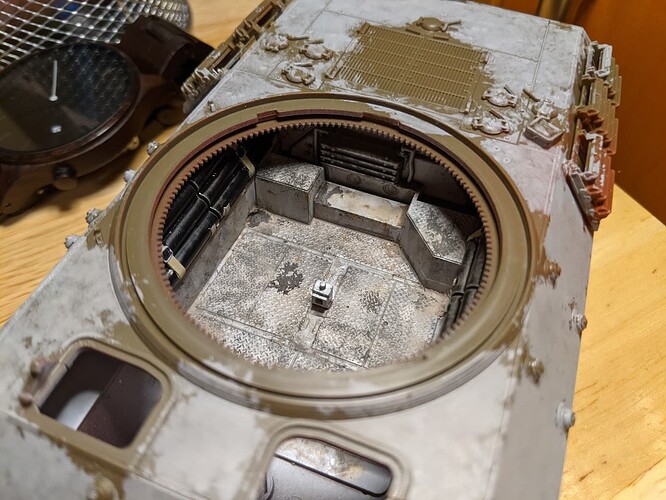 I’m really starting to think that photo has been captioned wrong Dennis.

11 CAR War Diary entry for that day. They were engaged in some fighting, but no mention of TD support on that day or any other. There is specific mention of support from RA batteries with SP 105s

Second history of the regiment. Also no mention of TD support, though this was probably written with the war diary as it’s primary source.

The caption is correct in that the Herman Goring division was being chased out of Italy (they were formally withdrawn on July 15) but I don’t see any mention of the OntRs being involved in that pursuit.

Apparently 78th British Division were also withdrawn to Egypt following the end of the battles around the Traisemene Line at the beginning of July. They were however moved back to Italy in August due to them instigating some riots in Cairo.

All of this messes with the date of that photograph.

I’d still go forward with marking it as belonging to 64 AT Rgt RA though, that battleaxe insignia is pretty sweet.

Yeah the whole situation seems kind of messy. The one piece of potential evidence that I found that could support the idea that the M10 was supporting the ONTRs was that photos taken on the same day at the same place were of ONTR troopers, but then again this could be misidentification by the archives.

Rule of thumb - never assume that an official photo caption is automatically correct. It often isn’t. The guys who took the photos and wrote the captions were usually APFU personnel who were very busy and working to a deadline. Over the years, I’ve come across many photos where the caption doesn’t match obvious visual evidence in the image - but such information matters to us as modellers in a way that it didn’t to the people involved at the time.

They would rely on what they had been told about the operation and who was involved (the ‘headline’ performer) and either not know, or not realise that supporting units had been attached temporarily.

The TD were Divisional or Corps tps of RA and assigned AT Regiments of the Division or Corps and supported Armoured Brigades or Regiments as required. The M10 to Armoured Divisions and the Archers to Infantry Divisions. They were not organic to Armoured Regiments
Al