Does the commanders gun rotate on a m113 apc,and if so is it mechanical or manual 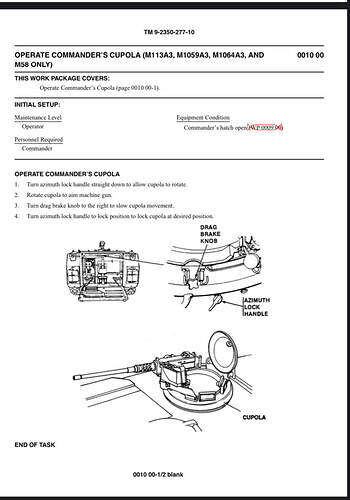 Many thanks awesome comeback

The machine gun pintle traverses separately on its mount, while the cupola has full 360* manual rotation after it is unlocked. It can be locked into different orientation positions as well,

The cupola is heavy and with a .50 cal. installed and the hatch open it is unbalanced. With a shield installed, too, it is much heavier and even more unbalanced. When the APC is not level as when parked in a motor pool, it is difficult for most soldiers to rotate the cupola freely and takes both hands to do so and a lot of effort to turn it. So I think the best way to describe the cupola is that its orientation can be changed from one locked position to another. In practice, it is not moving like you see the dorsal turret on a B-17 in old war movies.

One M113 feature that modelers often finish incorrectly is the trim vane. That’s the large flat panel on the upper sloped plate on the front of the vehicle covering the engine hatch. The trim vane is hinged at the bottom and is extended forward for swimming operations to help keep the nose of the vehicle from plunging. It is made of plywood and trimmed with aluminum strips on the top and bottom edges. Modelers tend to erroneously assume the trim vane is metal and paint and weather it that way. Nope, it’s just cheap wood.

Yes, in certain calm water conditions, when properly balanced and not towing a trailer, the M113 can swim. It even has a bilge pump. Most units never try swimming an M113 and for good reasons.

The hull of the M113 is made of aluminum. It does not rust.

Troops commonly call an M113 simply an “APC” or a “track”, as in, “All right, load your gear in the tracks and let’s get moving.”

Regarding the actual tracks that move the vehicle, there is a lot of side-to-side play in the tracks especially on top of the roadwheels. The tracks of the M113 can and do scrape against the side of the hull. It is normal to see exposed aluminum streaks where the track rubs against the hull.

The tracks of an M113 when properly tensioned will lay on the second roadwheel. That’s the dead giveaway for a properly tensioned vehicle. If the tracks are tensioned too loosely or too tightly, it is possible, even likely, that the vehicle will throw a track off the roadwheels. Throwing a track is a significant emotional event for the crew. Most crews are very diligent about keeping the tracks of their vehicle properly tensioned. Track tensioning is done at the rear-most wheel through a grease fitting. Add grease to increase tension.

Most of my 20 years in the Army (combat engineer) were with M113s. There’s a lot about M113s to like. And some things about them not to like.

Thanks for that Steve. I had no idea about the tracks. I’ll keep that in mind for the two I’ve got lined up.

You can see the burnt plywood and the remaining strip bits in this view, along with the trim vane mechanism housing : 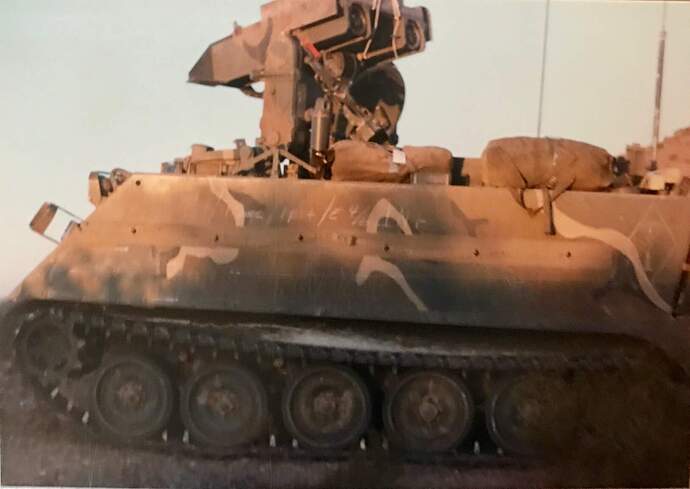 Ah yes, attacking over The Whale or getting a face full of moon dust out near Crash Hill or in The Alligator. There’s nothing like the NTC in June.

Lost newby lieutenant in the Alligator (easy to get lost in The Alligator): “Victor Two Three this is Charlie Six Nine. I’m a bit lost, need assistance.”

CO: “Roger, take a look around and tell me what you see.”

LT: “I’m under the cloud that looks like a dog.”