I was doing some image searching on Prime Portal and although I’ve viewed this image multiple times, it only struck me tonight that the aerials (three of them) are a non-standard(?) colour. They appear to be a ‘sky’ shade or a sea foam green interior shade.

Is this common or a personal crew preference?

Not sure what that middle antenna is for, or how to explain that color. But the two thinner, standard antennas for the SINCGARS on the rear corners of the turret should be CARC/NATO Green. That’s the color that they are when newly issued. Crews are not supposed to repaint antennas.

The shorter, thicker one is an EPLRS antenna. I have never seen one that color though. They are usually the same CARC/NATO green as well. I wonder if it could be a flag wrapped around it?

Thanks guys - My ‘take’, after studying the image, is that these aerials have been hand-painted.

Painting aerials a light colour so that they are less visible against the sky is hardly a new idea, but I’ve never noticed it before on a modern US vehicle.

Painting aerials a light colour so that they are less visible against the sky is hardly a new idea, but I’ve never noticed it before on a modern US vehicle.

That seems pointless to do as the vehicle itself will give you away long before the antennas will but pointless things are done all the time in the green machine.

The SINCGARS antenna are thing and the bigger EPLRS antenna is shorter and thinner then the wind sensor. It would be like seeing a broken or off color branch on a tree. Sure you can hide it but it’s pointless when you can still see the tree.

The British and the Israelis have long painted aerials in lighter colours because it makes them are less conspicuous - it’s not a universal thing in either army but it has been around since the 1930s. Granted, in open terrain the effect is probably moot, but in terms of a hull-down position where the bulk of the vehicle isn’t in view, it’s considered an advantage.

As noted previously, what I found curious was the use of it on an American vehicle because you guys are not known for doing this. 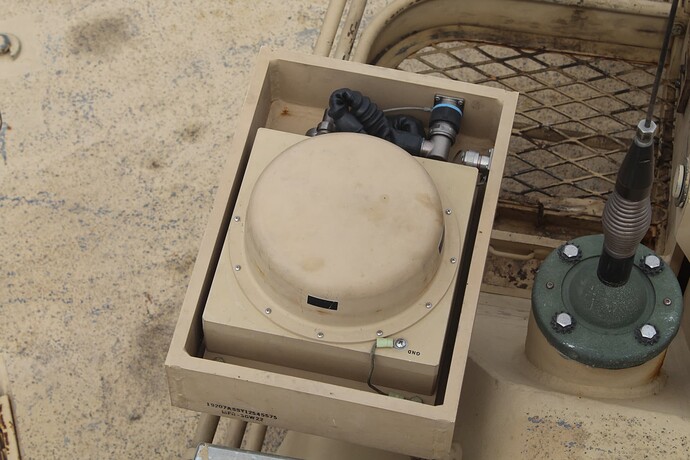 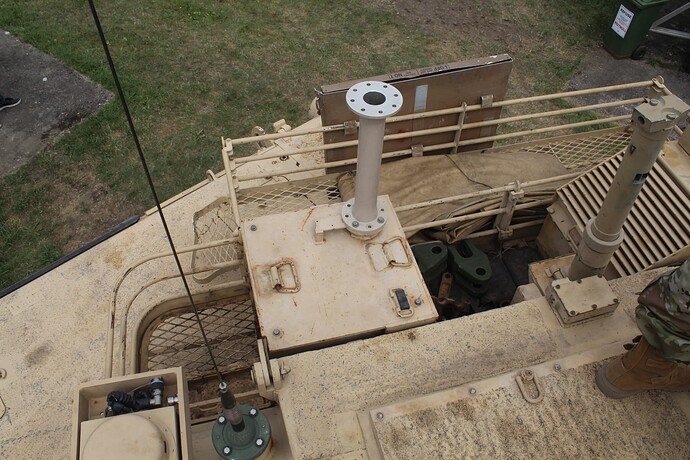 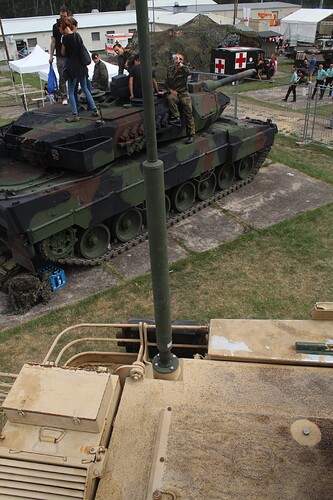 Agreed Ryan. I have done this several times while on Ch1 and CVRT. The painting was only meant for when the tank/AFV/Recce vehicle as in a fully turret down/sights up position so only the antennas were showing. At various times we painted ours fully grey, fully white, bottom half green and top half grey or white and other variations.
In real terms for a NW Europe ToO its a pointless operation. Any vehicle which is fully turret down when viewed from distances we use to operate at (between 1 to 3 Km for visual eyeball OPs) is pretty much hidden regardless what colour you paint your antennas. Bottom line … they always revert back to green … the closer you get, then you get back to your point, you will either see it or hear it …

The only time you need to worry about your antenna visibility, and has already been said the tank itself can be seen long before the antenna, is when you’re going force on force with a peer equipped enemy. In that case, antennas are supposed to be tied down - a cord with clip is attached to the tip of the antenna to keep it at an angle. Primarily, this is more of a skyline concern. Keeping the antenna from being silhouetted against the sky as seen from a distance, especially when just below the crest of a terrain feature such as a hilltop or ridge line. In urban terrain tieing down the antenna(s) also reduces the risk of the antenna coming into contact with overhead power lines, phone wires, etc.
Now getting back to painting of the antennas, crews should not do that because, depending upon the composition of the paint, it may contain particles that can inhibit the ability to transmit, reducing signal strength and reducing range. Not something that you want to do if you want to talk beyond immediate line of sight range.