I mentioned in the past the idea of Gomer Pyle at Camp Pendleton, with a tank as part of the idea. I just got the Revell kit, and wondered if such a tank were in USMC service in that era. Yes, Dragon makes an M48A3 but it would be rather “new” for that era, and I assume Camp Pendleton would be usig older tanks in that era. Any further info?

According to this we had A2s. Not an expert to know if the photo is misinterpreted or not.
http://mcvthf.org/History/Evolution_of_Marine_Tanks.html

At Camp Pen or Camp Elliot down the road in the Reserves I don’t know either but it is possible.

The page indicates M48A1 as M48A2, which is wrong . Photo copied for reference 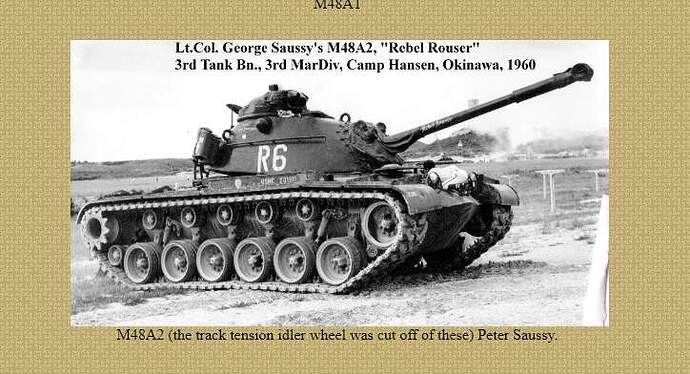 The M48A3 was what landed in DaNang in March 1965. They were not new at that time, but not that old either.

Here’s one on me. I found this article by accident: M48 through M48A3 Patton Tanks | Weapons and Warfare