Hi all,
As I can’t seem to find any aftermarket sets for AFV Club’s M54 truck - is anybody better informed?
TIA, Peter

The only AM I found are the DEF Models resin wheels. I don´t think you need more.

All I have seen are AM resin wheel sets; DEF and Panzer Art. In my opinion, the kit doesn’t need anything else. It is very nice as is. AFV Club really did it up nicely.

Voyager Model has two PE sets depending on the which kit you got. Real Model has some sets for the AFV and a few for the Italeri kit.

Echelon has a few decal sheets of which there is some templates for making a gun truck.

Thank you all very much - and I think you’re right: lots of the brass parts aren’t necessary, and those that are can be made from scratch.

Real Model has some sets for the AFV and a few for the Italeri kit.

As Gino stated the Italeri kit is slightly narrower than the AFV kit. Attached are a couple of photos. I did a conversion a long time ago using the Real Model cab and the Italeri parts to make my first M54, and the built another using the AFV kit. It’s not a lot, but as you can see there is a definite difference in width between the two,with the wider one being the AFV kit. 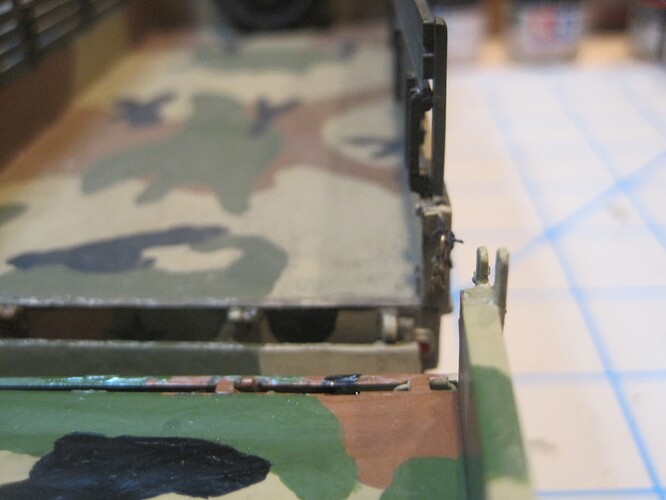 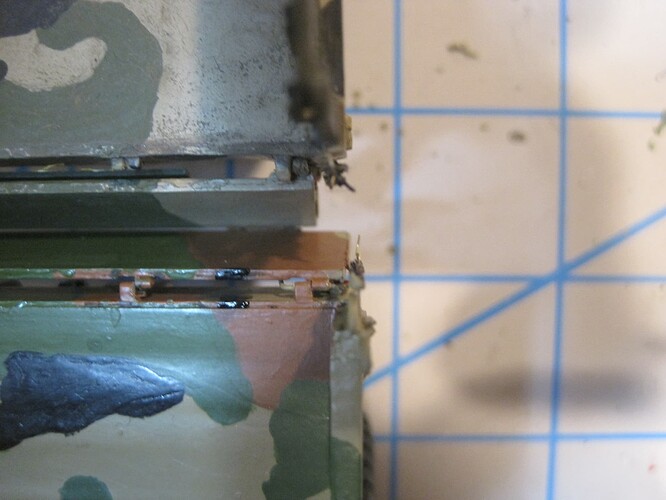 When I built the AFV version, I wasn’t aware of the Voyager PE set for the M54 and instead used the Eduard PE set for the M35. Quite frankly I know I didn’t use all of the Eduard set and looking at the instructions for the Voyager, I can’t really say for certain how much more of that set I would have used. That said, I’m pretty sure that if I had known about the Voyager set, I almost certainly would have purchased it, and I can’t say what additional pieces from that set I would have used.

I do know that since I made a Fuel Tanker with no seats or cargo bows, that there would have been quite a bit I wouldn’t have used.

Gino, Tom,
Thank you for your warnings. Years ago, I bought the Real Model M54 conversion set and wasn’t overwhelmed by it, so it stayed in the stash, and reading Tom’s MASSTER report with the pictures he shows here again made it slide further down, together with the Italeri kit.

Just how do you dispose of stuff like that? I mean, you can’t even give it to some kids - they might get scared away from the hobby if they started on such material…

Peter, I wouldn’t be so quick to dispose of the kit. If you take a look at the side by side comparison of these two vehicles, I don’t think that many people are going to say, 'WOW, those things are completely DIFFERENT!"

In this case the 5 Ton Ammo truck is the Real Model cab conversion build with the Italeri body, and the POL vehicle is the AFV. 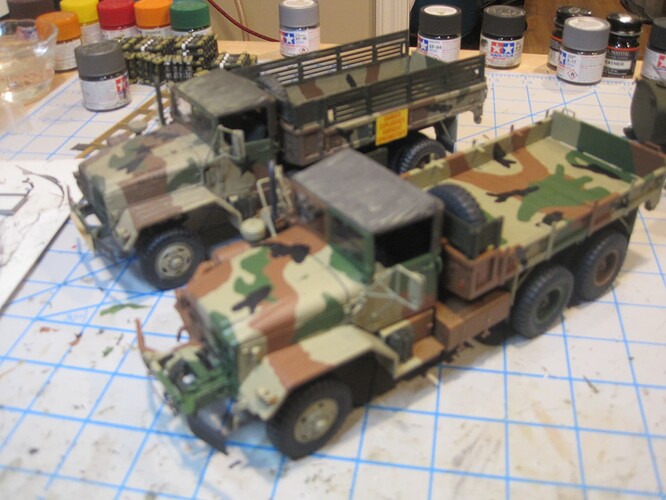 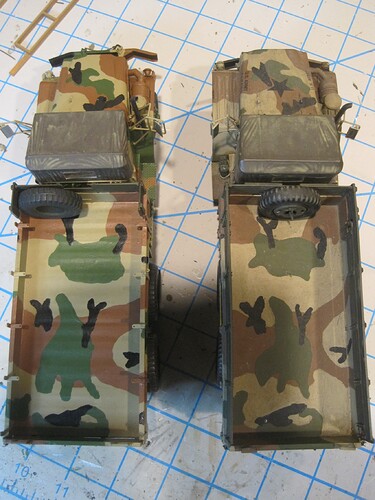 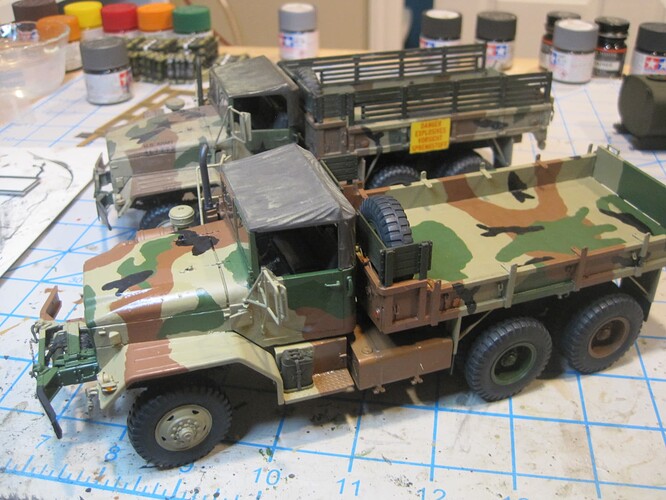 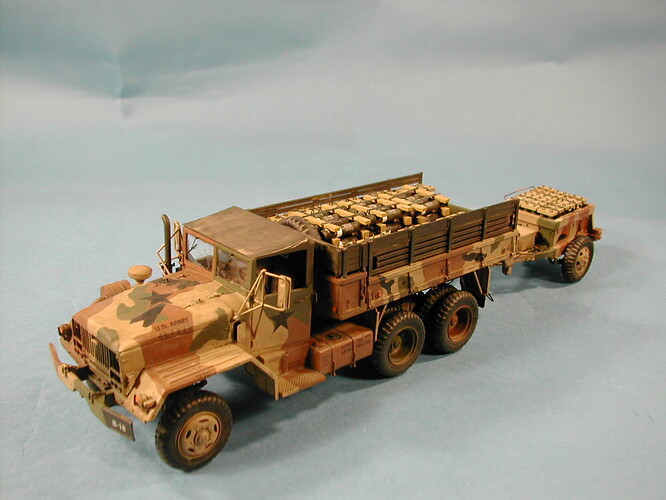 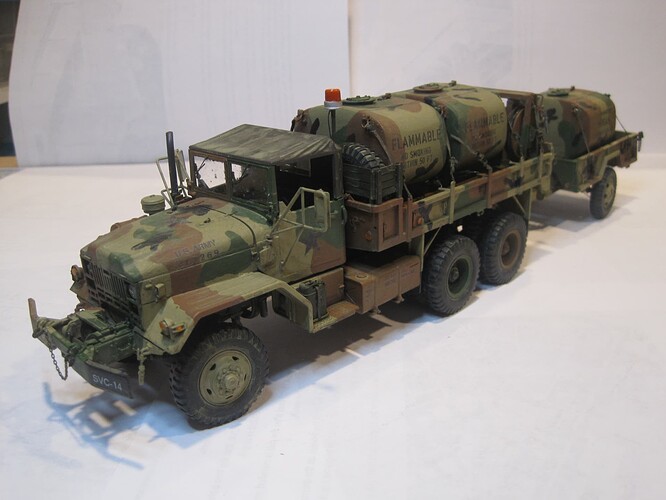 I agree with Tom. The Real Model sets are not bad, they just don’t fit the AFV Club kit. With a little work, the Italeri frame and a Real Model set can come out to be a nice model, as Tom shows above. Even side by side they look good.

Oh well, maybe I should keep the two kits - trouble is that I’m a slow building super detailer to begin with (production rate of less than one model/year) and have built the “Bigfoot” kit some 25 years ago, with steerable front axle, MR wheels, opening cab doors, tailgate, and one dropside; all this long before I stumbled across Vodnik’s devastating critique of the Italeri effort. And knowing myself, I’m afraid I would try and incorporate whatever corrections and improvements can be made to my M925 kit, while I think I have a large enough stash of “better”, i.e.more correct, kits as projects for the rest of my statistical life expectancy, if you understand what I mean.
Anyway, thank you once again for your solicitoueness,
Peter

Oh, Peter I am feeling your pain! I too am a slow building super detailer and I’m fast closing in on 72, so it’s going to be quite a race to see if I run out of time before I run out of stash!!!

Haha! @PzAufkl and @thathaway3 I hear ya! I am a slow builder now, but I was slow back in my 20s too!
Ken

Same here, Ken! Like the girl said: Not everything improves with age …

Question for experts, are the wheels and tires on M54 same as M35? I know Def did wheels for both but I am curious if they could be swapped from one kit to another. TIA. 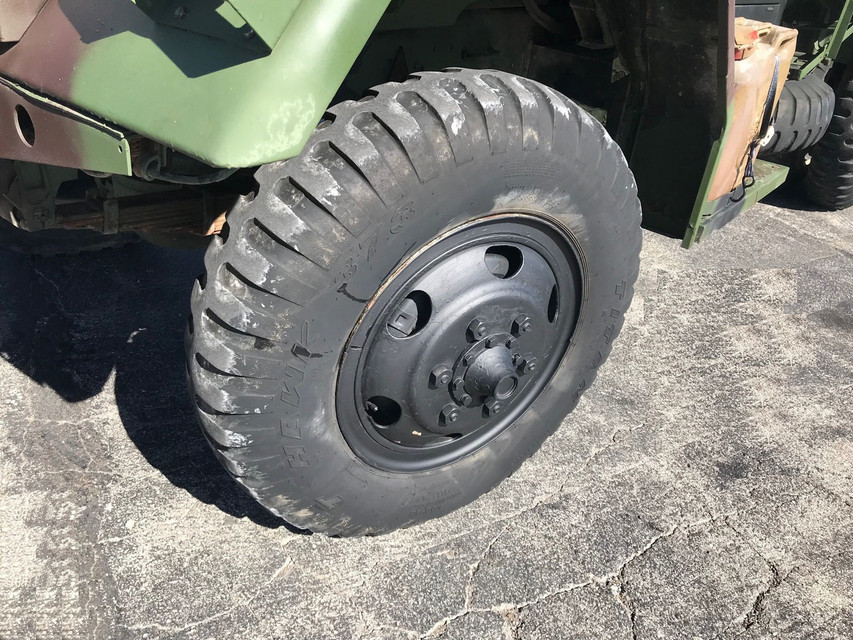 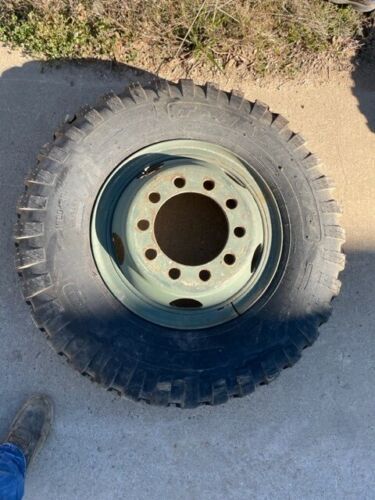 Like Frenchy says, no. The M54 wheels are quite a bit larger. 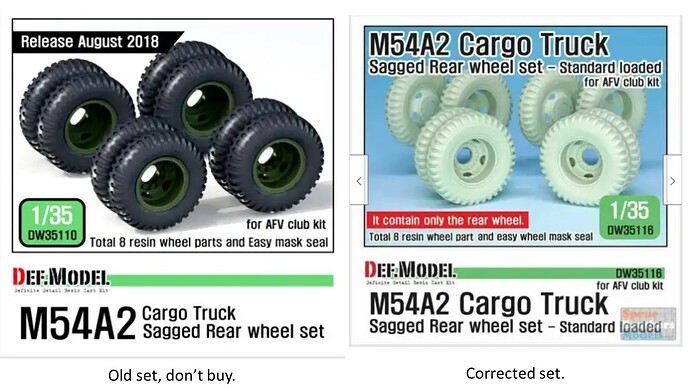 Thank you guys for the clarification. As I see them now I can spot the difference. Also, Gino that’s a good tip. Knowing my luck, I am sure I to purchase the wrong set as I have done few times in the past.

Short story, I purchased a 1/24 F6F Hellcat kit via eBay and after receiving it I noticed the clear parts are broken right in the middle. I went back to complain but as it happens to be the seller had written in the description about broken wind shield/canopy. So, my own fault not researching the item before buying and know I cannot find replacements