I’m looking for US AFV crew figs appropriate for Germany in the mid- 60’s for a couple of M60 slicks. The figs I have are wearing ballistic vests, not seen in pics I have of US crew in that time period. Pics I have show a variety of garb, looking for suggestions for fair weather (full sleeves) to cold weather gear. Any help appreciated.

I need TC’s and maybe a couple of standing figs for these two: 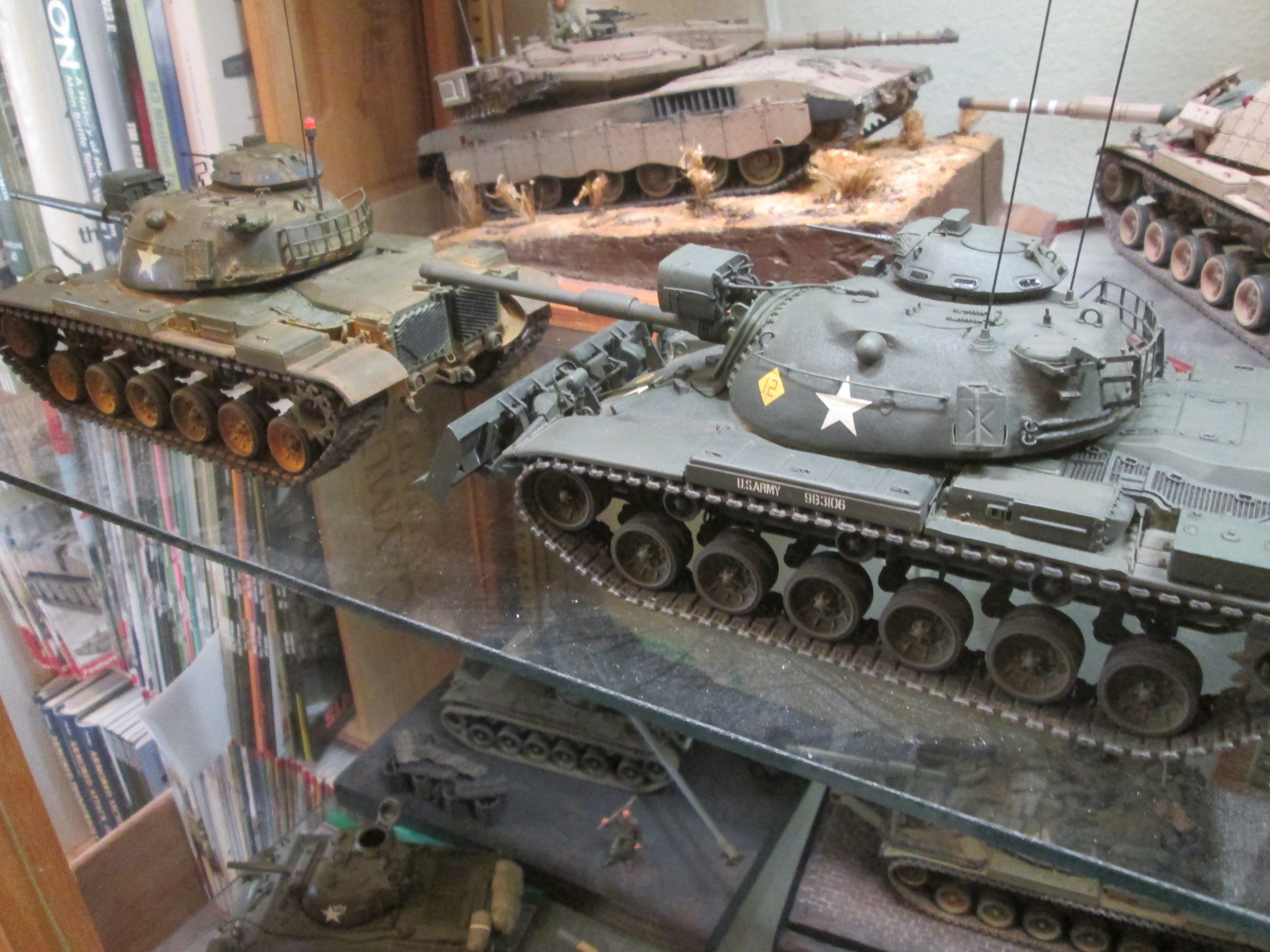 Very few options which are mostly some of older the figures released by Tamiya and which are generally OOP.

Others will likely chime in with specific suggestions, but for now, I’d point you towards looking towards some of the older Tamiya US armor kits.

This lack of NATO Cold War figures seems to be enduring and one that many of us hope some manufacturer will eventually satisfy.

Unfortunately, in plastic, there are none. You can use some of the older Tamiya ones, but they are generally bad.

In resin, there is one set by Valkyrie. 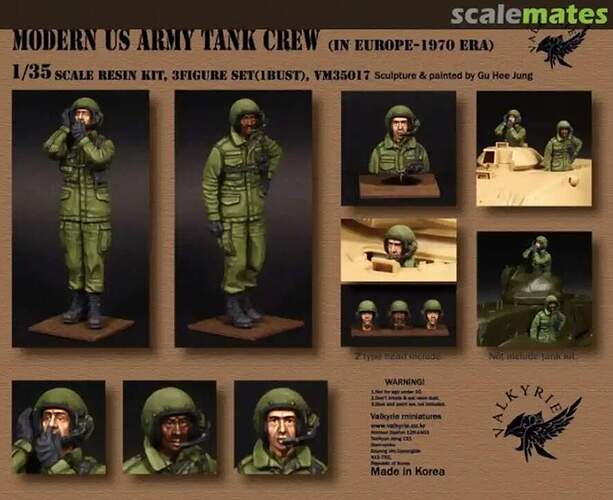 These also include the more modern DH-132 CVC helmets which were issue from 1973 to present (with a few updates, but they look pretty much the same). 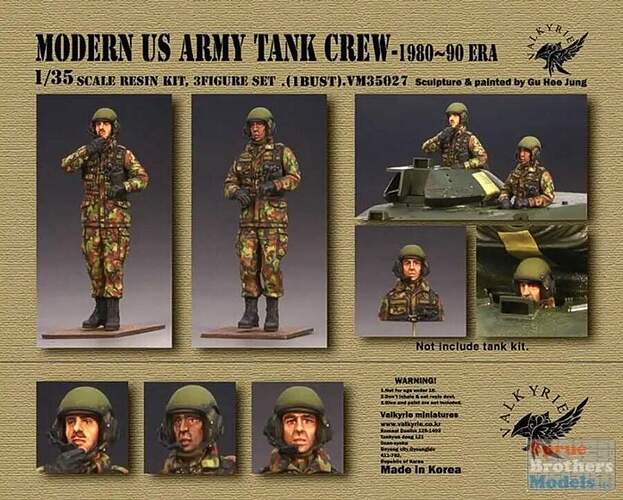 If you can find them, Bravo 6 did a very nice set of 8 '60s-'70s T56-6 “Bone Dome” CVC helmets with PE boom mikes. They can be used to update the older Tamiya sets or to help backdate any figure. 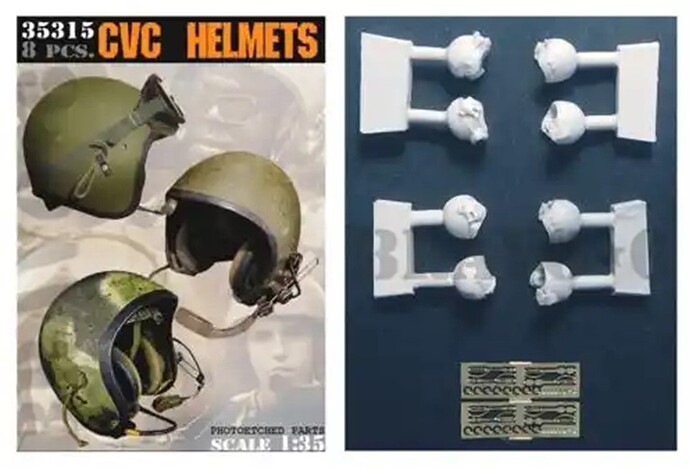 If you want some grunts on the ground around them, there are a couple of options, sort of.

If you take the new Tamiya Infantry Scout set (35379) and swap helmets for camo covered ones, weapons for M14s, and newer boots, you have early '60s infantry in basically OG-107 Fatigues and field jackets. If you use M16s, ALICE ammo pouches, and H-back web gear (available from Bravo-6), you have late '60s through early '80s infantry in the same. They won’t be prefect for the time, but close enough. 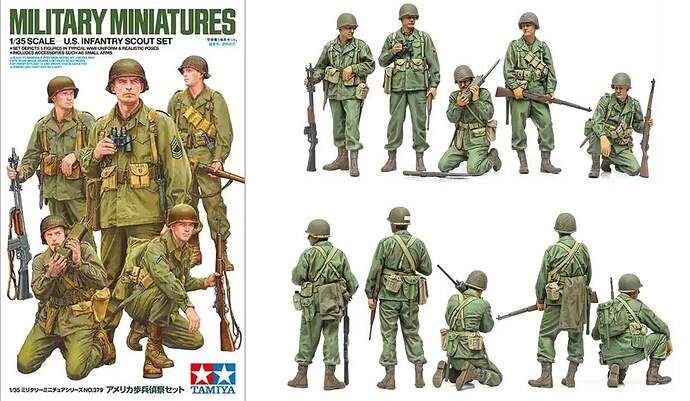 The same can be done using MiniArt’s U.S. Soldiers Rainwear set (35245). This includes 3 figures in ponchos and two in raincoats. The ponchos are pretty much universal and still pretty current. I’m not sure when the raincoats went out of use. By changing helmets, boots, and weapons, you can represent '60 through modern troops wearing the ponchos. 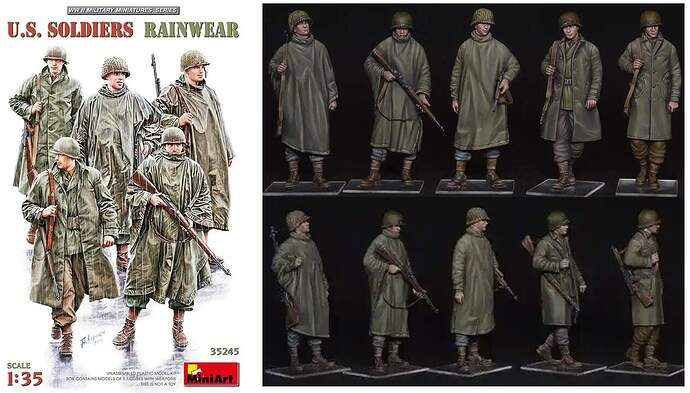 That is what I plan to do with them any ways. We’ll see how they turn out.

Thanks all! I was planning on doing a vignette with a mounted TC and a couple of casual crew figs seated or standing outside the tanks, looks like I may have to settle for just TC’s as my figure conversion skills are weak.

The old Verlinden Vietnam tank crew set had a driver figure bust that would work. He’s wearing an OG107 uniform. Tamiya’s M48A3 driver also works, though a head swap is in order. I disagree to an extent that WWII figures can be adapted for the '60s to early '80s OG107 uniforms, especially for tank crews.

Russel, for crew figures the Valkyrie ones take some beating but seem to be getting a little rare, and prices have been on the rise too, but they are really good and practically the only game in town.

For additonal figures, say Infantry alongside interacting with the tank crews, then there’s a real problem as highlighted; adapting can be pretty arduous and involve sanding, sanding, and more sanding; that’s before you start experimenting with Milliput or whatever and tackle pouches and straps. Then you’ll have to add weapons (not too much of a problem from the sets available), but then integrate say, Hornet Heads and so on - a real faff in my opinion, though I’m getting used to it. We Cold War modellers seem to be a bit short-changed, but hey - that’s modelling perhaps.

No, for your purposes, I’d go for Valkyrie; you can always use Hornet Heads to ring the chnages if too many look alike (they do the appropriate bonedome helmet from the era).

I’ve got a few of the Tamiya M48 drivers and a couple of the Verlinden guys too, but I may end up coughing up for a Valkyrie set after all. Dang it, some Cold War era guys would be welcomed now.
If I painted the guy’s clothes on the far left in this pic in solid green and used a head with the old bone dome, would I be too far off? 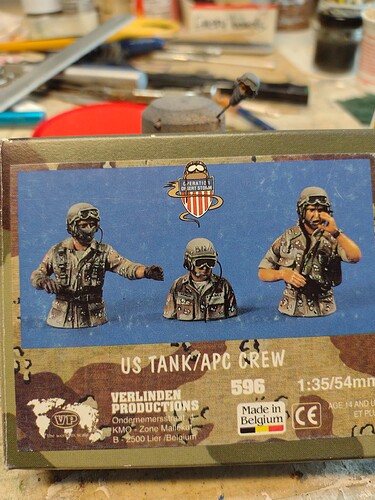 Eeehmm maybe a silly question / remark from me , but wouldn’t ‘vietnam - era’ figure sets be usable , unless off course you wish to make a winter setting …

You would be off as they’re depicted wearing the All -Purpose Lightweight Individual Carrying Equipment (ALICE) which came in around 1974.

You could probably try the figures from this rather old Tamiya set (but usually still available at shows, eBay etc): 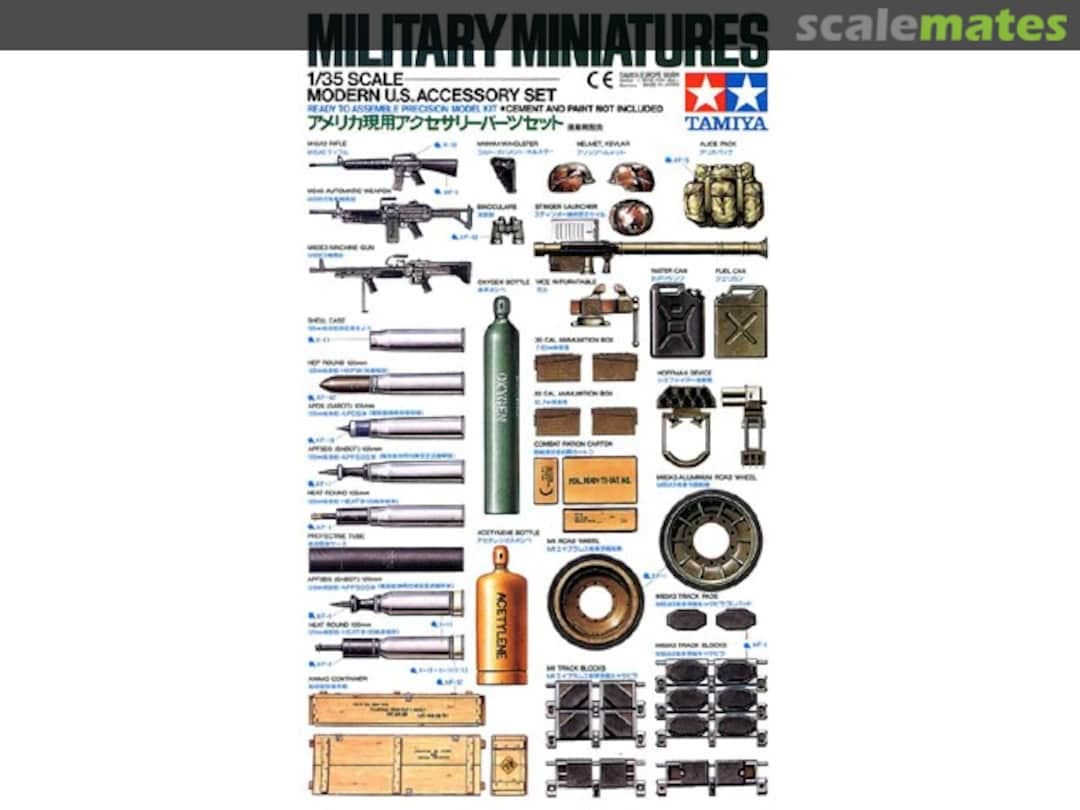 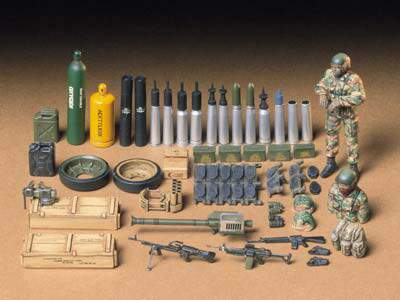 The uniforms might need a bit of tweaking but as they’re with shoulder holsters you’d be fine for the period you want; just add say, Hornet Heads:

The figures are a bit lacking but I’ve used them with new heads and they aren’t that bad.

If you decide to pursue Vietnam-era figures the big problem is that they’re often modelled with body armour which is next to impossible to remove; sanding down is extremely difficult as well.

Not a silly question at all. Generally speaking Vietnam figures don’t work well for US Army Europe figures of the same time frame. Even in the summer, troops in Europe for the most part wore full fatigue uniforms with shirt and trousers. It seems to me that every time you see a Vietnam figure, he’s either shirtless or has on a white “T” shirt. Also they often have a different style of trouser and boots that were not worn in Europe. None of that would fly in Europe at that time. Being on a Firebase in a combat zone had a very different set of rules.

But those of us who served in Cold War Europe really do not have a wealth of generic figures to pose as dismounted Infantry, or for me, more importantly dismounted FA crew members and other dismounted soldiers. In full uniform.

I don’t think so

Rats. Well, I have a couple of the Tamiya guys and some Hornet heads…

Both the Verlinden ones and the ones out of the older Tamiya accessory set are in BDUs (DBDU - Desert BDUs, for the Verlinden figures) not OG-107 Fatigue uniforms. The cut is different and BDUs have extra pockets, etc. Unfortunately, there are no out of the box solutions for Cold War figures in OG-107 Fatigues.

Vietnam figures will not work either as they are in Jungle fatigues, not the OG-107 Fatigues worn by the rest of the US Military at the time. 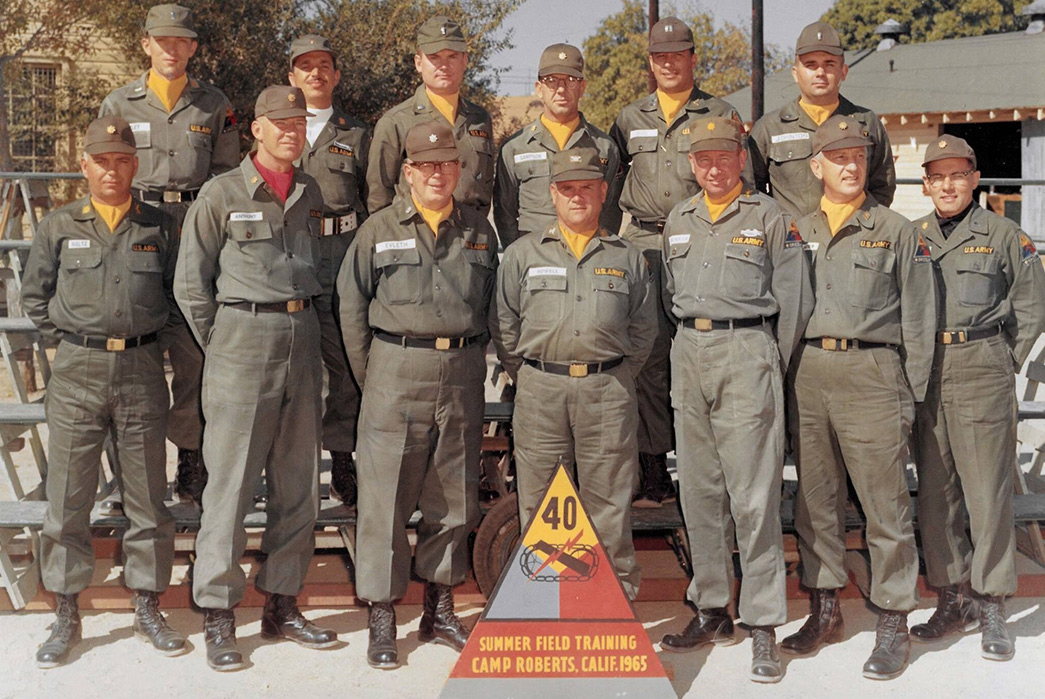 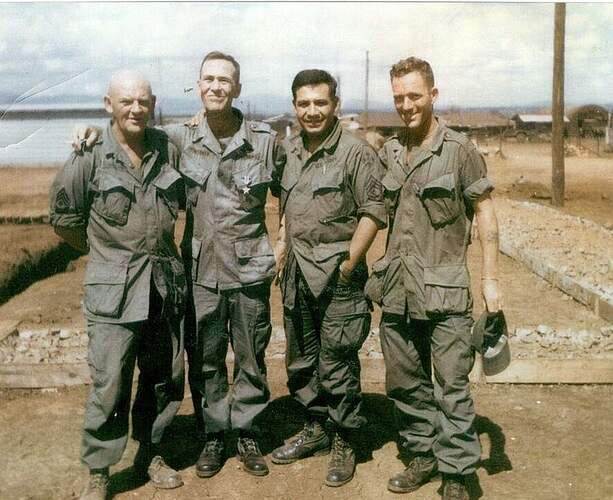 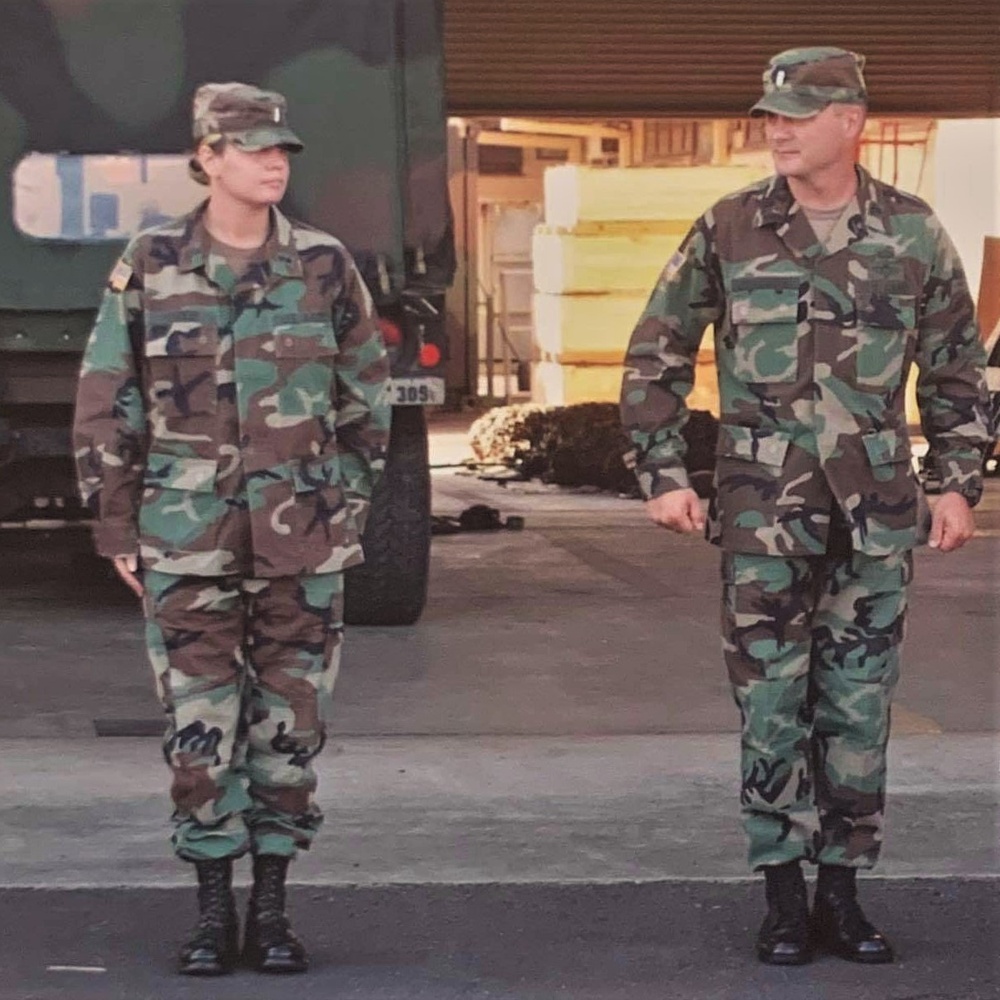 Heck, I’ve got some torsos from IDF kits that are real similar to what I need. Bingo. Thanks Gino.

The tank commander figure that came with the old Tamiya M1 Abrams and M2 Bradley (and the Academy copies) was in fatigues. You would have to replace the head with a Hornet one, but the bodies are good.
Ken

I’ve got a couple, may use one. I still have four of the Hornet heads, I’ve got time to make up one for a show Saturday and diddle with the rest later.

The tank commander figure that came with the old Tamiya M1 Abrams and M2 Bradley (and the Academy copies) was in fatigues.

They are, but I stick by my earlier comment about early Tamiya figures; they are horrible. These two are so skinny they look like 12 year-olds.

They look a lot like me, at least back when I was 18. But with a new head (and maybe some different arms, for variety) and stuck in the hatch of a tank, they look OK. 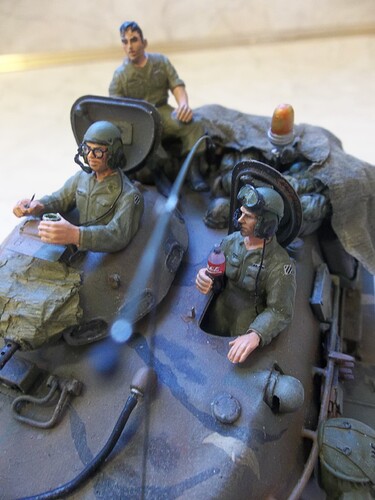 I admit they did turn out nicely, with a lot of changes and TLC. They look nothing like the original figures. Great work. Maybe I’ll keep a few and stop throwing them away from all the Bradleys I have.

I did not know about the difference between ‘typical’ vietnam fatigues and those used in Europe , thx for the explanation.