I am ashamed to admit that my stash has zero American tanks or vehicles. The only thing American is a F-16 and a ship. Part of this is because I’m not a big Sherman fan. However, I do like Cold War and modern American armor.

With sprue bros 15% of takom sale I am thinking of adding a M60. I’m curious what would be the best one to add for ODS. The choices are the M60A1, the M60A1 with ERA, and the M60A3 with dozer. From my preliminary reading, only M60A1 were involved in ODS, and all the pictures I can find are the ERA variant. Were non ERA M60A1’s involved?

I am also interested in the M48A5 but it seems the only kit is the dragon offering which seems hard to find.

These belong to the 1st Marine Tank Battalion training in Saudi Arabia during Operation Desert Shield : 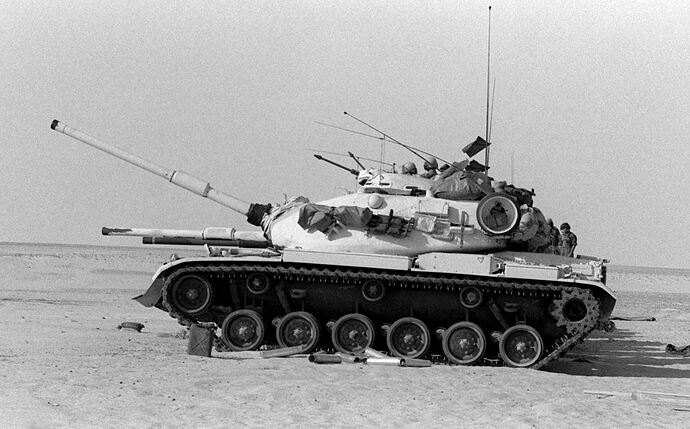 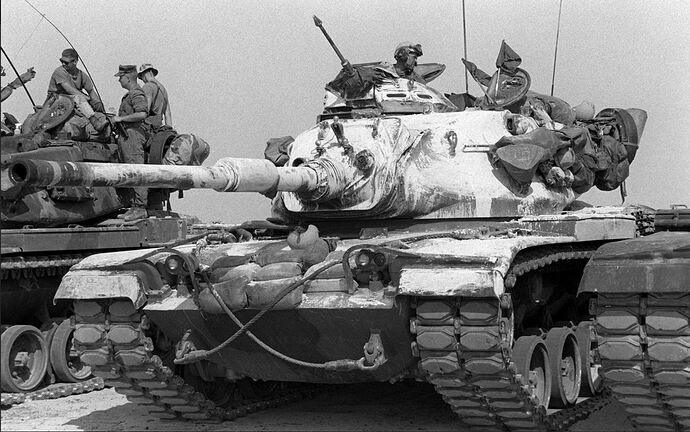 I think for the Marine A1, you still want the A1 Era kit and just leave off the Era. I don’t recall why though I think it is the air box is different for the Marine then the Army by that time. The A1 Era dozer (new 02142) would also work for a Marine tank in ODS. You see one dozer in HP’s last photo.

Now, the US Air Force did have two M60A3 dozer tanks in the ODS attached to the 401st TFW (P) EOD in Qutar. There is markings in the box, just not enough and you also needed the ribbed wheels (aluminum) and the kit only provides slick (steel). Panzer Art sells a set of ribbed wheels or certain AFV Club kits have both sets.

I picked up another A1 Era and A1 Era dozer kits myself.

The USMC was also given a Bn worth of M60A3 TTS (Tank Thermal Sight) from the Army to provide them with some better night fighting capability. They were spread across the M60A1 Bns.

…you still want the A1 Era kit and just leave off the Era. I don’t recall why though I think it is the air box is different for the Marine then the Army by that time.

I am suspicious of the pictures of the 1st Bn photo’s. The tanks look like they were deployed early in Desert Shield. They appeared to have been driven off the MPS ship and taken straight to the field. The paint was sparingly applied by brush, broom or rag. The ERA (which was applied in the port) has not been applied. They are zeroing their main guns. I am not familiar with their Desert shield/ storm history enough to know if they were pulled back and had the ERA applied or not.
If I am not mistaken, The Saudi’s had M60A3’s.

I am suspicious of the pictures of the 1st Bn photo’s…If I am not mistaken, The Saudi’s had M60A3’s.

The Saudis did/do have M60A3s, but these are definitely M60A1s, no barrel shrouds. Also, the guy on the left tank below is either a Marine or Corpsman as he is wearing an 8-point cap. Not sure where they are, but they appear to be USMC M60A1s. 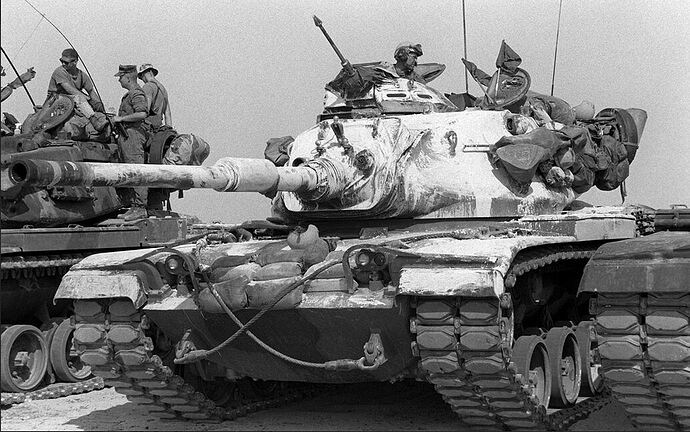 IIRC 5th MEB was on float at the time and A Co 4th Tank. They where repaint once in Kuwait.

More tanks from the same unit : 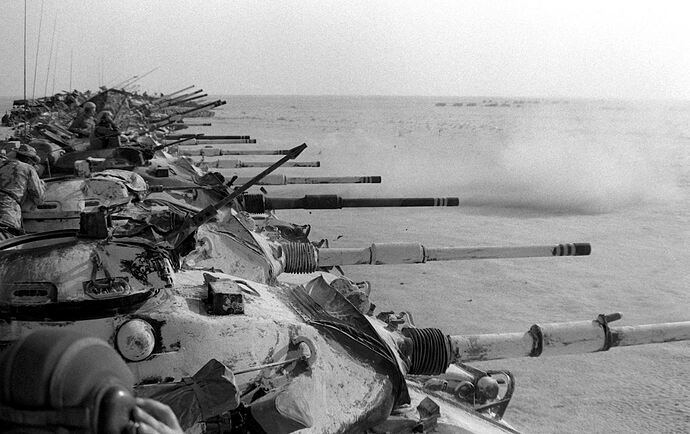 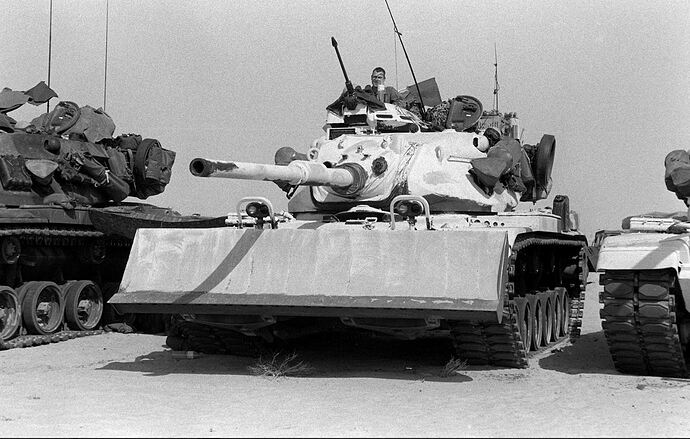 I was just looking for the top photo, I recall it being attributed to A Co 4th Tanks but I have been wrong before.

Some threads from the old site that might help.
https://archive.armorama.com/forums/5591/

Thanks for all the great info! Looks like I’ll need the M60A1 and I can build it with or without the ERA attached depending on when in the battle I want to depict it

These are not ERA tanks. ERA tanks had dozens of small studs/mounting points for the ERA welded to the hull and turret. Additionally, the turret side rails need to be removed, the grenade launcher mounts need to be modified, the spare grenade boxes relocated to the air cleaners, and a few other modifications need to be completed before ERA can be applied. 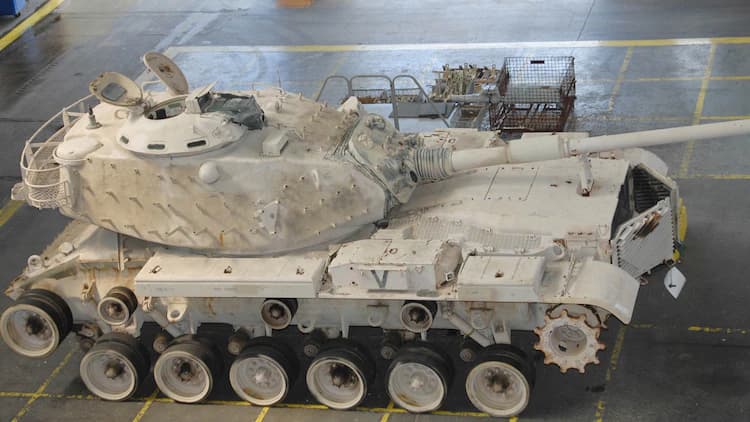 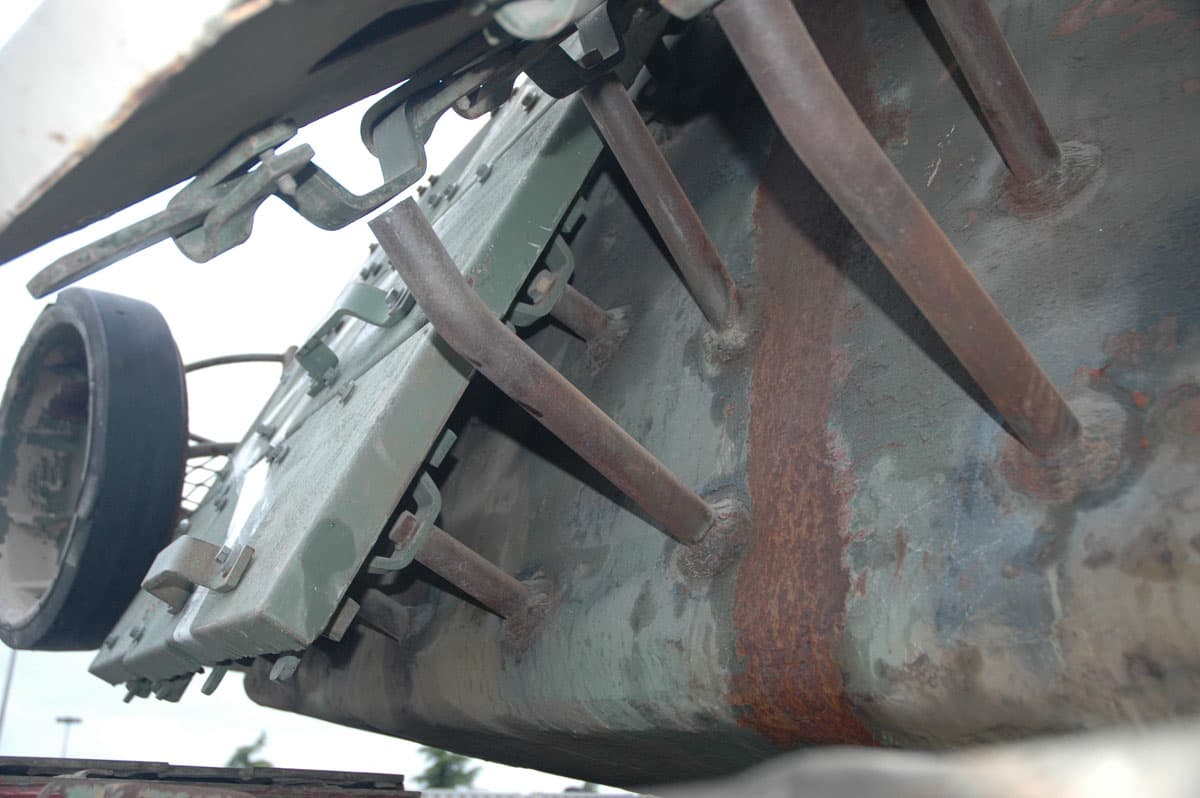 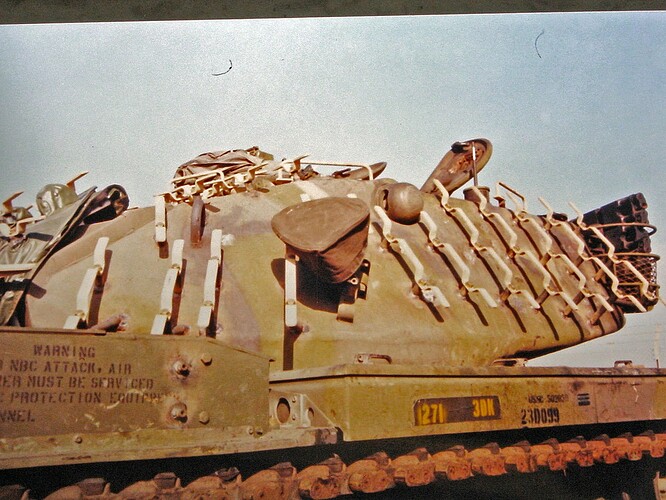 I wasn’t suspicious about it being Marine tanks, only of them being Desert Storm without the ERA being added before combat.

There was a large station set up with Navy Welders. They were adding mods to the tanks. All of the mine plow, mine rollers and mine rakes were added on in the field. The ERA studs would be an easy task if the kits were available. Although… they did not have enough active explosive tiles. There was only enough for the front slope and turret front. The rest were the hollow training tiles…Sort of like wearing your bullet proof vest without the Kevlar inserts.

Is that a hastily applied sand paint color on that M60A1??

Not sure if done to that tank but was done to a number of them.

mud coating it’s too cool
I’ll do it in the next life!