@phantom_phanatic , @bwilt , @Bison126 , @Gil17, @camshaft- Many thanks to all of you for the kind words, it is very much appreciated.

@Bison126 - Oh man, the kit got the number plates wrong too! Thanks for pointing that out.

@petbat - Wow, such kind words and praise Peter- really made my day- thank you! Sometimes you just get one of those kits were you just have to finish it despite the setbacks and this was definitely one of them.

@B-17-peter - Cheers Peter, thanks for the nice comments.

Your Alpine looks great! The extra effort you put into making this difficult kit into an attractive model paid off.

What is a Cricut machine? Is it for cutting letters like the sign companies used to do 20 years ago?

Your mention of this kit being a difficult build put me in mind of some kits I have squirreled away. They are of very attractive subjects but are said to be tough builds. In my case they await my skills to develop enough to make a good job of them.

Perhaps this would make a good campaign idea? Choose one of these difficult builds and get it out and tackle it . . .

Best is to read this topic about that cricut machine

Thank you for the kind words and praise Paul. I think a campaign about difficult/poor kits would be interesting but it also might be a difficult one to fully define.

As for getting out one of those kits in your stash I would say go for it but don’t stress about it if it ends up half finished or even binned- there will be a lesson in it somewhere! Doing a tough kit can help build up your skills too and that’s always worth it, at least IMHO.

@bwilt - has kindly pointed out a thread here about the Cricut but your guess about it was pretty much spot on- though it can do a variety of different things as well as cut out letter shapes.

I had a friend who was in the sign business for a while with a large cutter. He did some hobby stuff for me with it. Looking over the article on the Cricut machine I can see it will be worth exploring. I currently use Illustrator at work and if I could design the files there I would feel right at home.

Difficult builds would have to be self defined. I have a buddy who is a real master. He does a lot of kit bashes & even complete scratch builds. His view of projects that give me the willies would be quite different from mine.

I did a bit more work on the Char 2 over the weekend. First I shot the bits with Krylon Matte finish. I tried a small part with the same mix of wash and seeing it worked well shot all of it. It came out at least as well as Dull Coat and dried very quickly.

The side armor plates on the kit were warped and I was not able to fix them with the hot water method. The kit maker promised several times to send a new set with my next order and after several attempts and follow up orders I gave up and made new ones out of plastic card. I used decal rivets but they were too small for the scale & hardly show up at all.

Model Master Steel was brushed on to the tracks and allowed to dry overnight. Next was a mixture of washes to dirty things up. I intend to apply pigments and felt that the washes would be best applied a little on the heavy side to make sure they show through those pigments.

This was a prototype tank and would not have had a lot of use. The pictures show it good & dusty with what looks to be oil leaks. Having two original Model T cars I know that oil & grease seals were in their developmental infancy. Many systems were total loss & not sealed at all. They required frequent greasings & oilings and all of this made a mess. We’ll see next weekend how close the guesses were on this model. 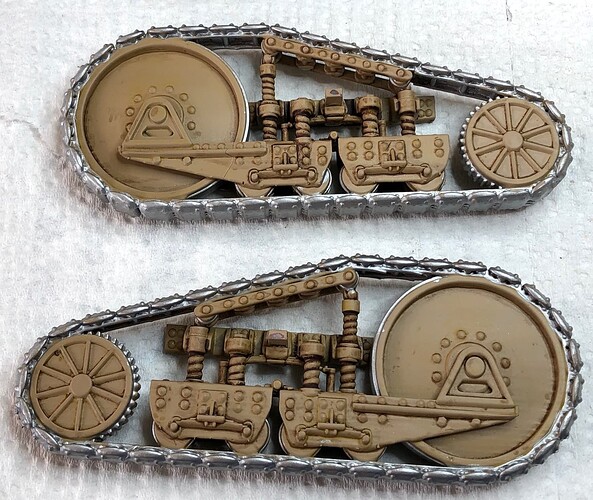 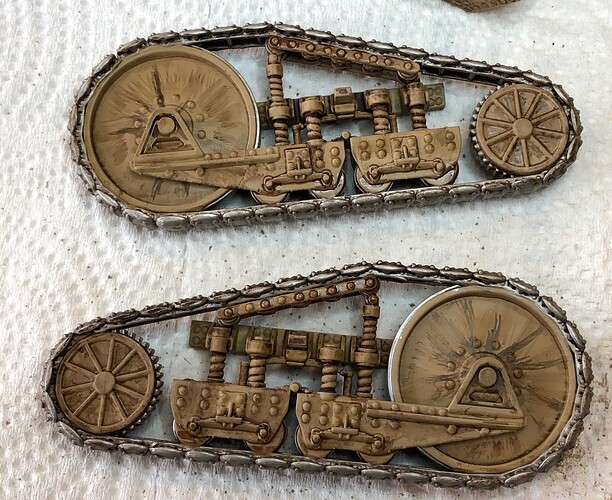 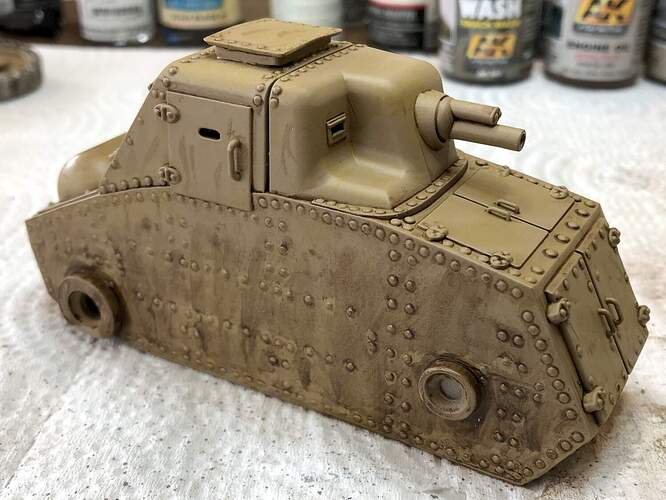 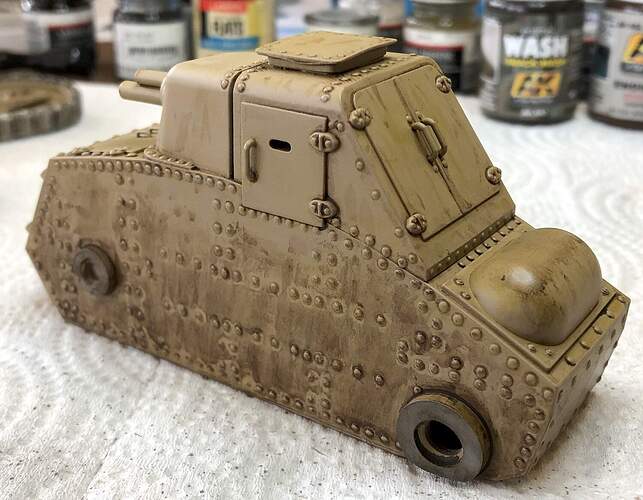 That’s an interesting insight you have there Paul regarding oil and grease lubrication- you’ve certainly captured that look on the model.

Lots of great stuff being built here, who knew there were so many different French made things!

It seems that this build came right at the right time for me. Dealing with 2 different builds that are generating a lot of dust from the fill/sand/repeat method, and 2 ships with their PE, it seemed that my eyes were going downhill fast! We recently took a trip to the capitol for a family visit and to pick up the nieces, and to keep me busy I dragged 2 kits and a box of stuff to do some cockpit work. While it was nice to take a trip for the first time since all this lockdown nonsense, I was able to enjoy some old school building!

In 1996 Tamiya released several kits that have been called “shake and bake” kits. These kits marked a revolution in the modeling industry and these kits hold up quite well despite their age. The D.520 is one of these kits. This was re-released in 2011 (according to the decal sheet) and included a staff car. Not being a car kind of modeler, I was very thankful for everyone that chimed in to give me a bit of direction on what turned out to be a Citroen Traction 11CV. A subject that will follow this build. Needless to say, this is a very clean well fitting kit.

I began with the cockpit, and hand painted the interior with a combination of grey/black for the majority, khaki green for the seat, and gloss black for the instrument panel. I took a slightly different approach to putting the decals on the IP, by cutting them to place them such that they’d lay a bit better than if the decals were placed as one decal. Upon returning home, I gave the parts a coat of clear flat, and highlighted the instrument dials with some future floor polish, and a dry brush of silver. Since the interior view will be mostly lost once closed I chose to focus on the IP and seat. I added a set of RAF PE belts and gave everything a burnt umber wash and called it done. 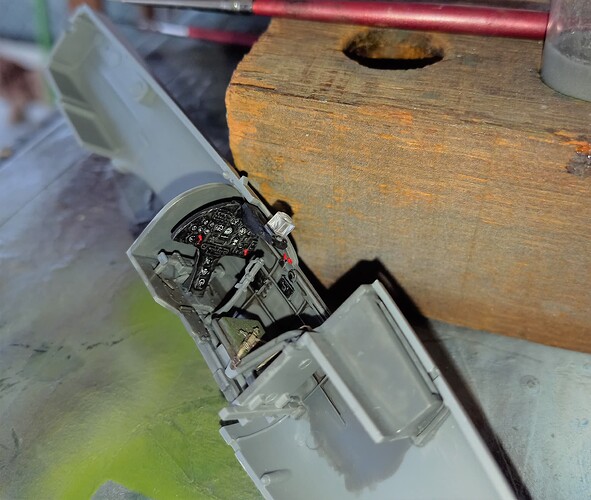 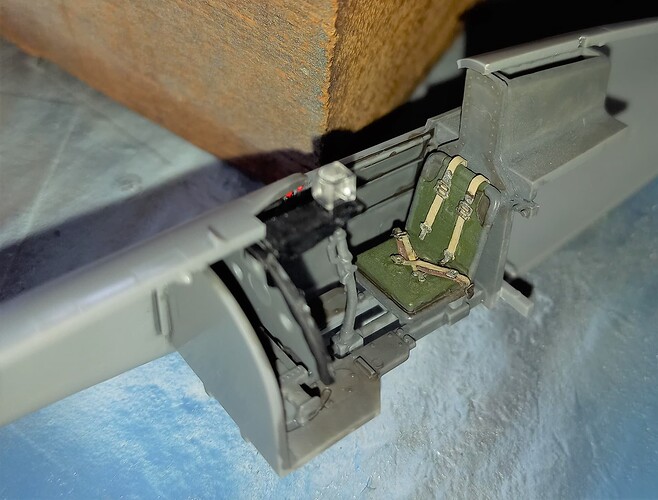 I closed up the fuselage, and blinked twice and poof there was an airframe! 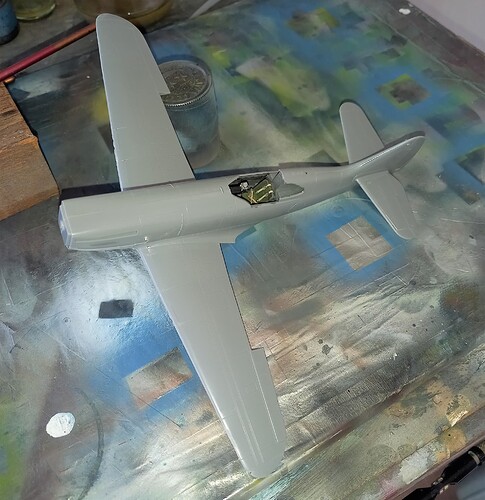 I went to add the flaps in the closed position, blinked again and I had a complete airframe. A few touches of Mr. Surfacer 500 were all this bird needed. 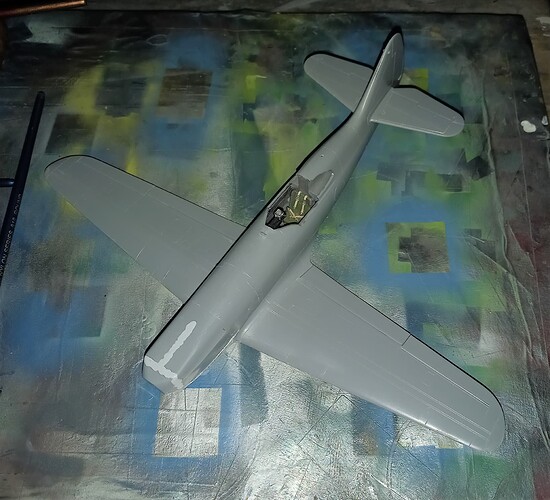 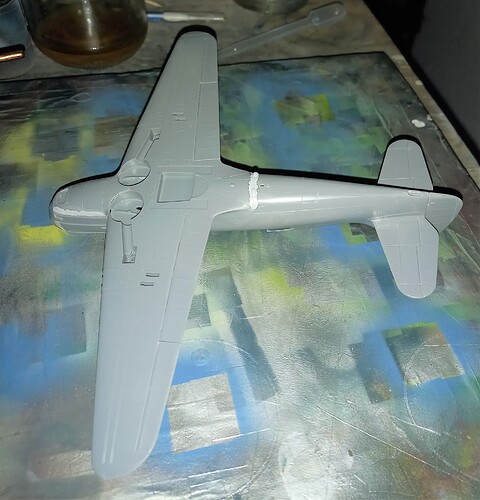 Following some light sanding and she was readied for painting! 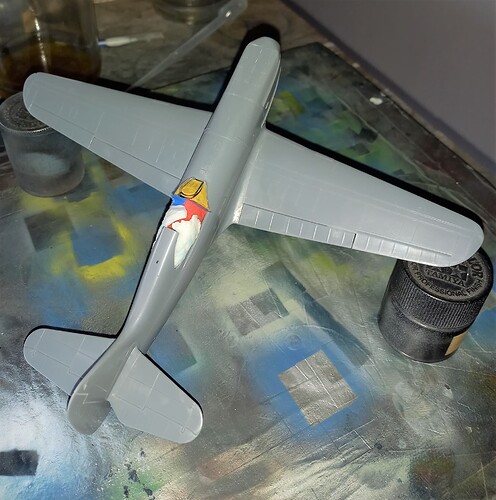 First up was an overall primer coat of Mr. Surfacer 1500 black, which was then rubbed smooth using an old tee shirt cut into “airbrush rags”. 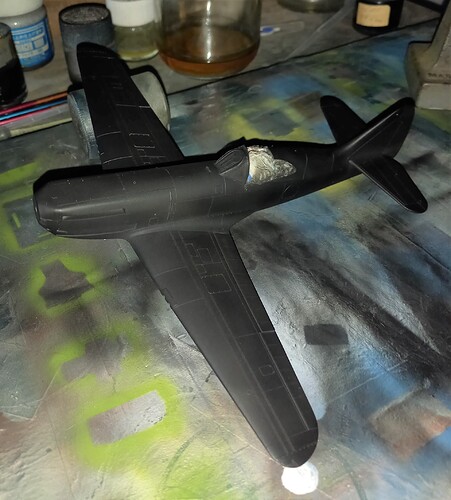 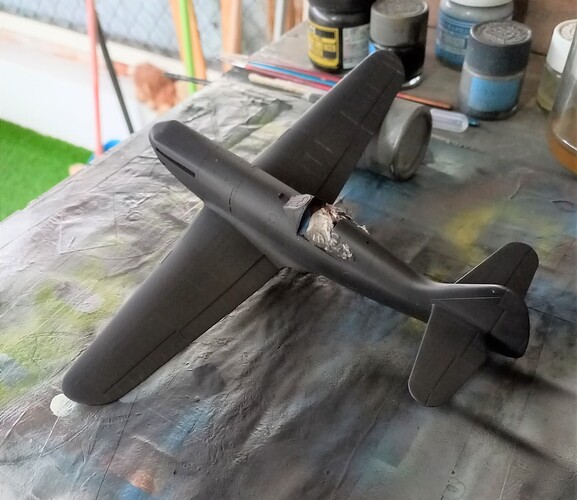 With a nice primed airframe it was time to start the four color camouflage. I followed the instructions and the basic painting mixes provided doing the underside first. For this I used Mr Color (MC) light sea grey mixed with white 2:1 parts then thinned 1:4 with Mr. Leveler thinner (MLT), something I do with most of my paints. I find it’s a good thin mix that produces reliable results using Tamiya and Mr. Color paints.

Using the black base method throughout, the underside was completed, and once dry I taped off the lower areas to prevent overspray. 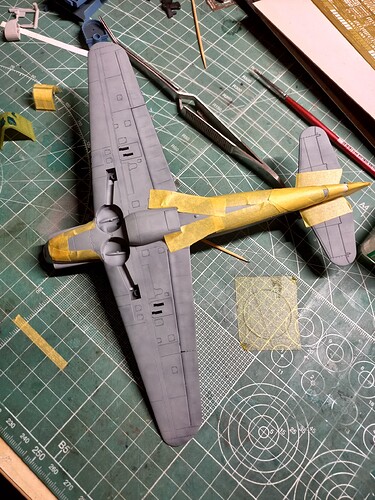 Moving topside I laid the first of three colors, a light blue/light sea grey mix (1:2), diluted and followed the instruction drawings and free handed the design using a badger Sotar 2020-2F at around 10 PSI. 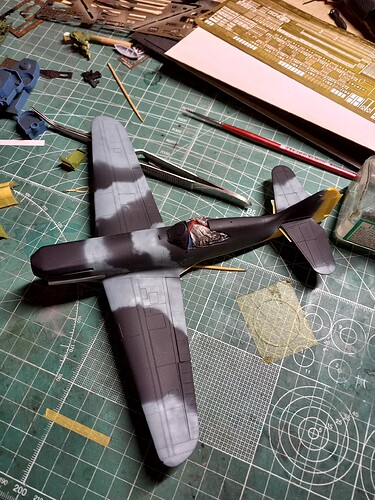 Next was the green. Lacking the called for colors I used MC Field Green which seemed a close enough match for me. 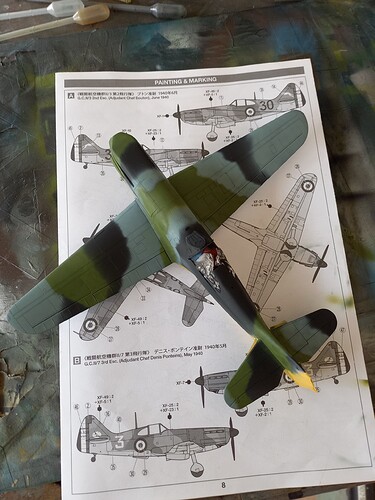 This was followed up with Tamiya’s Linoleum Brown, which looked right as well. 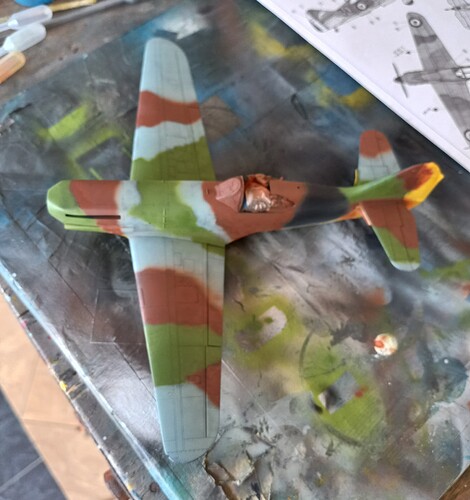 I then went back over and touched up the lines and made things look a bit tidy. 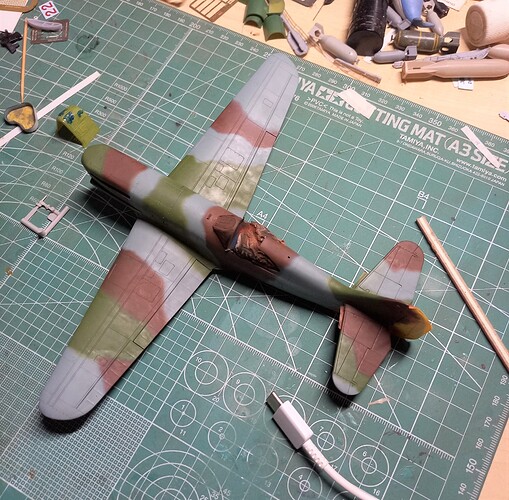 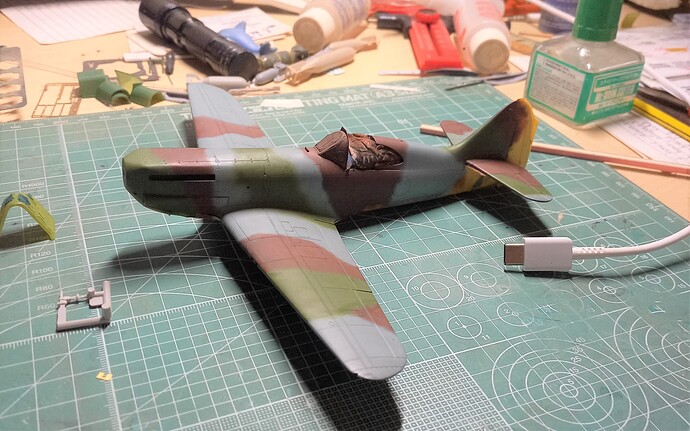 I gave each coat of paint a healthy does of MLT to level things out before moving on to the next color, and again when I had finished. I try to limit this, as there is a danger in messing the whole thing up, by testing a small area I get an idea of the amount of thinner to spray. This usually produces a nice even finish.

Next up will be a few touch ups between the upper and undersides, and then onto a clear coat! This has been a snap of a build, 5 days from the installation of the cockpit to here.

Very nice, a model of a not to well known French airplane, nice addition to this campagne!

That is a beautiful little airplane and your build is really bring it to life. I have not heat of the MLT spraying to level things out. What is MLT and how does it do its work?

I finished the little two man Peugeot Char 2 experimental tank 3D printed model Saturday. I tried two new things on it. First, I tried a new pigment - Dark Steel. It is just a greyish powder but in the areas where I could rub it into the steel paint it brought the luster up to look like polished steel. The pigment was also rubbed onto the tracks and it helped to bring the shine on the high spots up. This will be a very useful tool for areas where it can be applied & rubbed in.

The second new thing is Pigment Fixer. In the past I had always just brushed pigments on & depended on the porosity of the paint to hold it in place. On this build I wanted more of a dirt build up both to replicate fresh moist dirt and to hide raster lines I could not sand out.

Here are the parts ready to assemble and then before the side armor plates went on which completely hide the wonderful suspension detail. 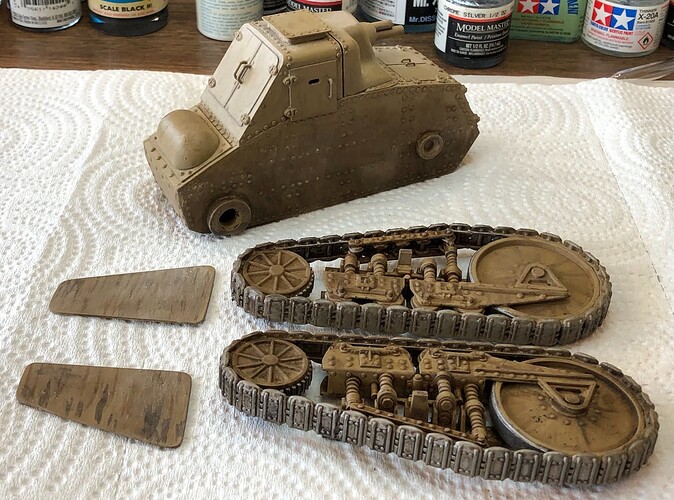 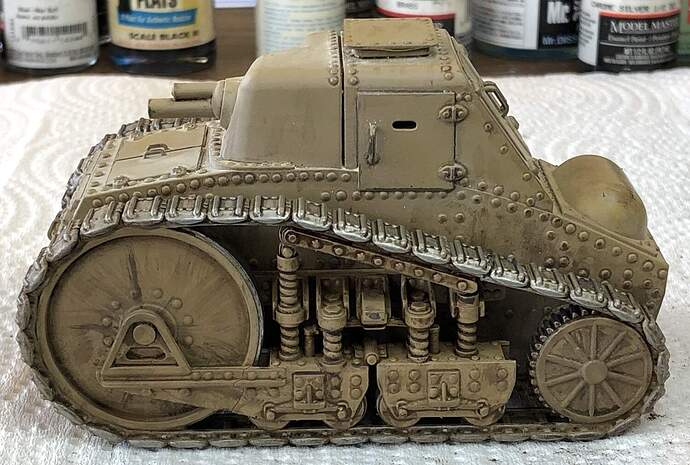 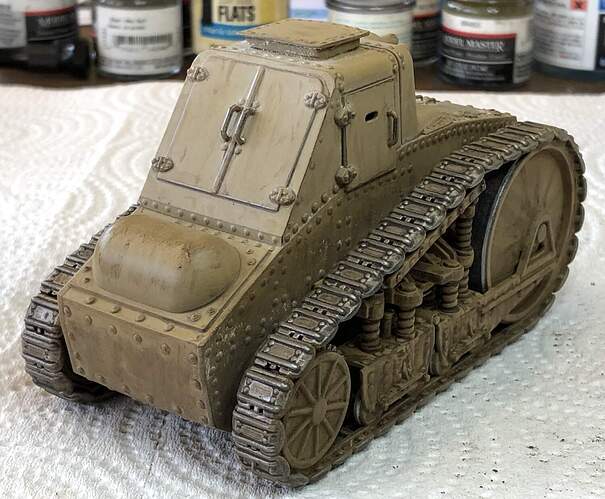 The model is done now and will go into the display case. I like the 3D printed models and will build more of them. 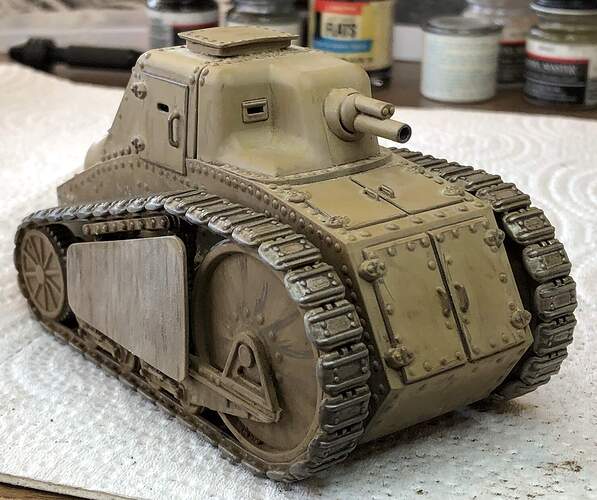 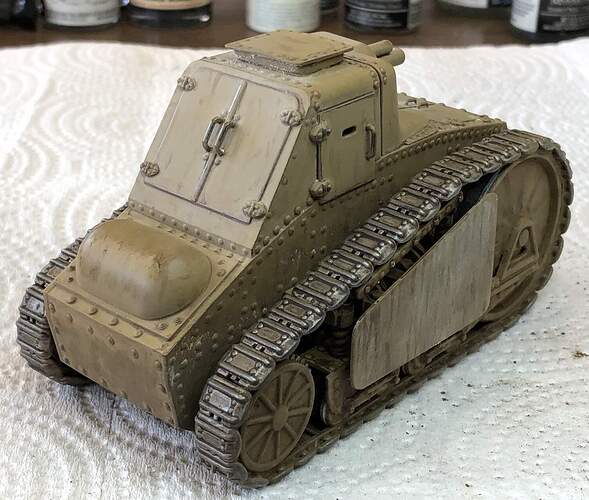 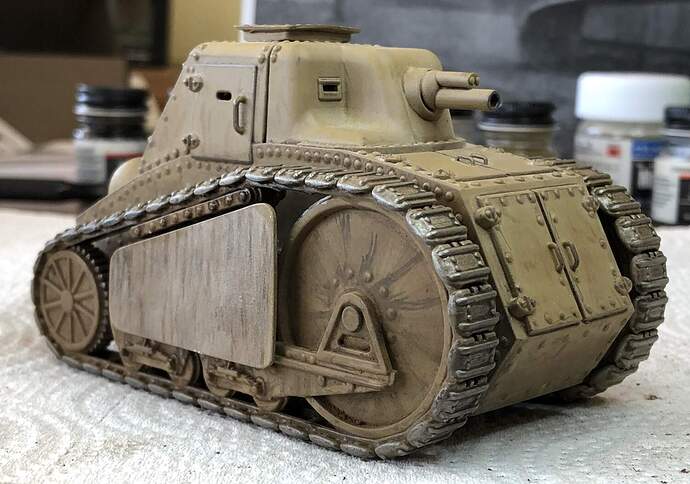 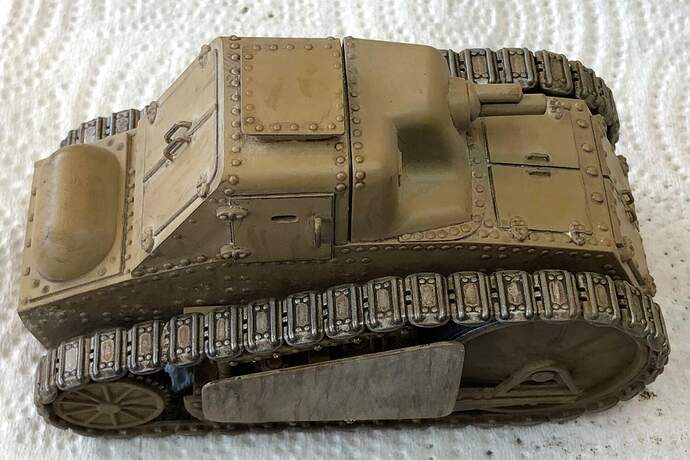 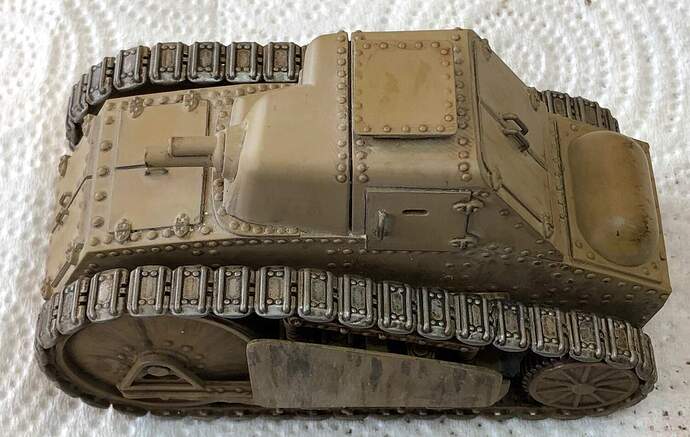 That came out really well.

Paul, that looks fantastic! Odd looking thing but very interesting. 3D printing is really opening up all sorts of possibilities for subjects like this.

John, looking good. Really nice paint scheme. I might just have to add one of these to my collection.

Its exciting to see something come along that is completely out in left field. If this kit is representative of the 3D printed models out there, we are in for a lot more interesting things. This kit had raster lines that were largely eradicated with careful sanding. I imagine future kit will be even better with finer detail & less rastering.

This Char 2 will go into the display cases along with the other models and look good enough to fit right in the the more conventionally produced kits.