Amazingly, we hear so much about how the Maginot line was a failure, but nothing about how it failed, or even what it looked like. Not until I bought a book on it did I learn anything, such as how it was not so strong after all. Also, what did the fortress troops even look like? All I saw were a few fuzzy pictures.

I’m sure one of those has a color drawing of troops who manned the line.

Not to oversimplify but it failed because the Germans didn’t cooperate. Interconnected strongpoints, pillboxes and various defensive positions designed for static warefare. While the assumption was the Great War was the war to end all wars, the allies knew peace wouldn’t last based on the economically brutal surrender terms that Germany was forced to sign. The dawn of armor, air and massed machine guns and the appalling loses that most knew would be repeated because certain generals were not forward thinking gave rise to it. The French telegraphed their intentions to cling to an attrition based model of warefare by building it. The Germans countered w Blitzkrieg and an move towards mobility. They bypassed the line and strong points by moving through areas that French generals said were impossible for an army to maneuver thru. Hubris and shortsightedness and a failure to anticipate that warfare will change were why it failed.

A little research on the line and overlaying it onto of the trench locations and major battlefields from WW1 areas will show the French thought the avenues for invasion would follow 1914.

Ironically while the Germans bypassed it and showed that long lengthy strong points were ineffective because warefare evolved into a more mobile form; well they fell into the same trap anticipating the invasion in 1944. They expended massive resources and manpower along the coast, concentrating on the area with the shortest distances between coasts because they assumed that’s how the Allies would come.

Assumption is the mother of all #$@& ups is how the expression goes.

There are several youtube videos with footage of the Maginot troops. The second half of this is a good example and there are more listed on the right. 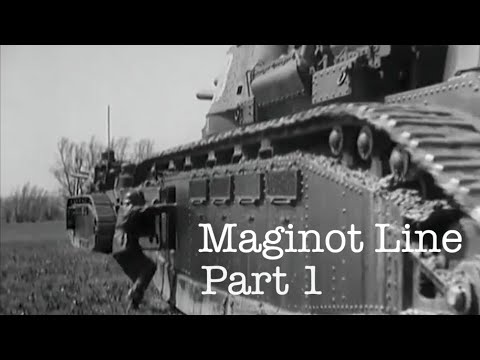 Just Google the Forts, Maginot Line Fortress and you can find lots of images…. 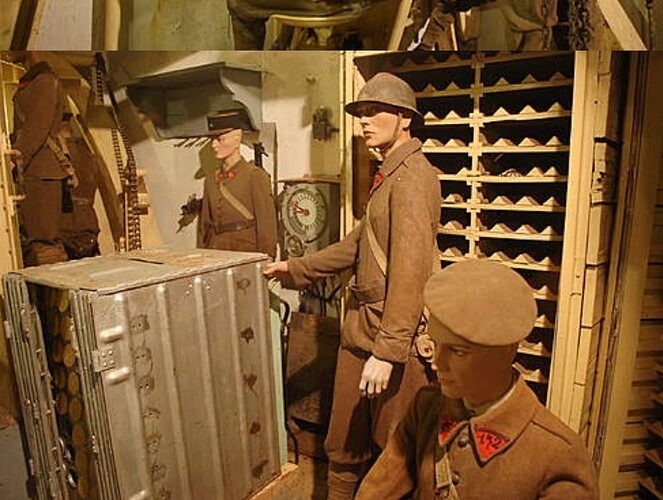 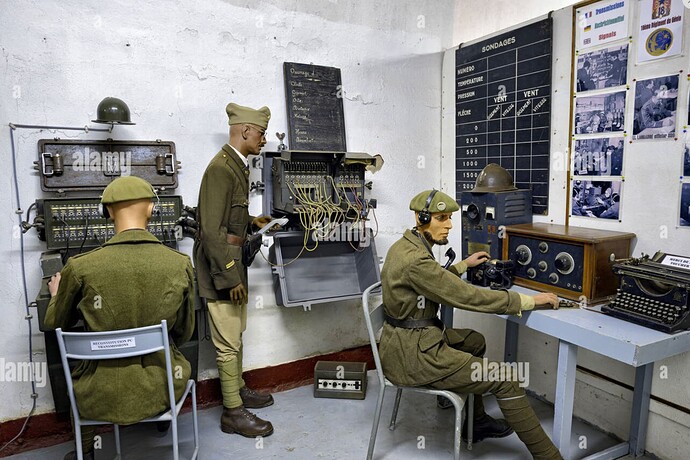 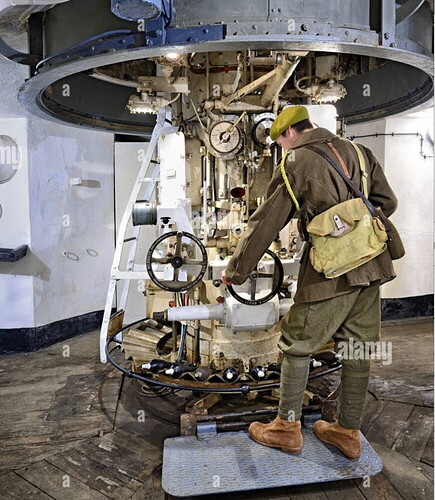 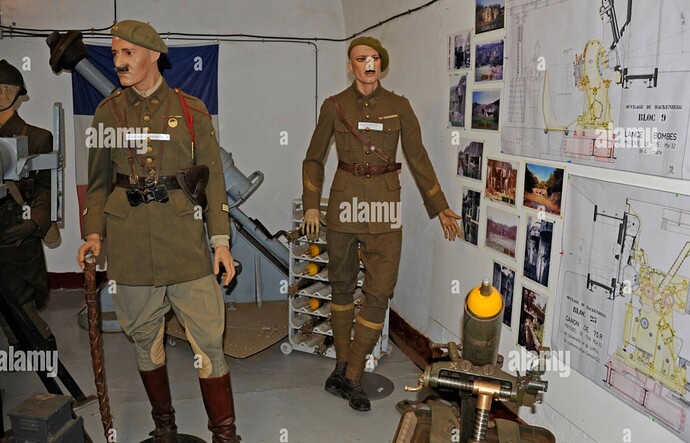 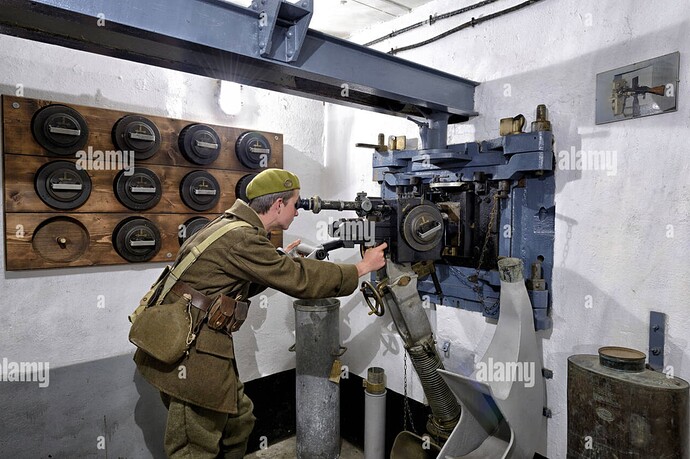 You mean the “Imagine-o” Line? In one case. the Germans moved up an “88” to within range of one of the strongpoints, but out of range of it’s defensive guns, and proceeded to blast it into rubble.

Very true. I’d think you’d and the book would agree that the Germans eere selectively though in the sections they actually assaulted. Looking back, the way I phrased it might have made it sound like the Germans just took the ‘long way around’ and skipped like a drunk at a holiday dui checkpoint (excuse the obvious American example there).

To those that have heard about it, it’s easy to picture this 100’s of miles of interlinked strong points but that wasn’t the intent. The French designers tried to augment it with natural terrain features but in hindsight they miscalculated how terrain would hinder the future German advance.

I won’t pontificate about the failure of the depth of the defenses. There’s plenty of retired military guys here that can do that much more in detail than I’d attempt here. But in the end the line was a relic of bygone thinking the day the first shovel hit the ground in it’s construction. But at the dawn of WW2 this outdated thinking was prevelant in all countries and theaters. One only has to look at the internal conflicts in the US Navy in the battle between the outdated thinking of capital ships vs naval aviation predominantly in the Pacific. Then one can switch to Europe and the US clinging to daylight bo!bing in the absence of sufficient long range escorts.

The Germans were just as guilty and inflexible on their side later in the war. When the concept of blitzkrieg proved ineffective in Russia that turned the advantage to Russia. Due in no small part that a certain Austrian corporal refused to let experienced generals retreat and fall back as needed while clinging to hopes of taking cities for no reason than hoped for blows to russian morale.

Guess in the end the French were not the only ones clinging to outdated tactics and approaches. Of course I have the benefit of a library and a wealth of works to draw up on. But this illustrates that entrenched doctrine is slow to change, usually to the detriment of the men doing the fighting.

It was not a failure at all. German troops attacking the bunkers suffered a lot of losses. Many fortresses resisted well after the rest of the French army surrendered. The true issue is that the French government did want to build the line along the Belgian border. So the Germans just had to break through the Ardennes.
In the South the Italians did not manage to break through.
Concerning the line troops you may Google ligne maginot in French. You’ll have a number of French sites dedicated to the line and the crews as they are named in French.

The only reason some fortresses resisted until capitulation is because the German army just ignored them and isolated them. As for the Italian army, they were a joke! They lost ground not only in attacking the south of France, but also when they attacked Greece through Albania. Their only “victories” in Africa were against tribesmen armed with spears, bows and arrows, and ancient muskets.

I have a hard time accepting that assessment in that it took Germany merely 6 weeks from May to June to capture the lowland and take Paris. If the line offered even a token resistance one would think it’d slow the German advance down considerably. For what was expended resource wise it’s hard to argue that it was effective or anything close to a success. Had the war played out like WW1 then a case could be made it would have performed as designed. As we know though Germany did not cooperate in this regards.

German troops were more battle hardened (Poland etc.) than French ones, which was why they had better success.

According to one estimate the Maginot Line cost US$9 billion in today’s money, construction being 1929 - 1938. Certainly a formidable bastion but the weak points (Ardennes, Low Countries) were never plugged properly as already mentioned.

The other problem was the extremely low morale of the defenders – conscripts cooped up underground for long periods etc. Hindsight’s a wonderful thing but that $9 billion should instead have gone to building up a world-class air force to dominate the skies over any incursion(s) along the border.

France outnumbered Germany in good-quality tanks throughout the 30’s including 1940, but didn’t read Guderian’s book about how to best use them. De Gaulle did, but his masters were still fighting WW1 in their minds.