Making sure seams are really gone

Yeah, I hate super glue. For this work I dab it on with a tiny paint brush (I got a pack of disposable ones from the craft store), so there isn’t much on the model. I sand it smooth so don’t need to use a remover. But I have some super glue remover that I use from BSI. Not sure what they call it but it’s sold right next to their super glues at the LHS. You brush it on and it seems to make the glue into a gel like substance which then peels off.

My foray into planes has been discouraging. Good thing half my stash isn’t planes right? Lol

Your suggestion could be worth investigating.

My hints on removing sprues was probably in the old forums.

To the bin they go, I tried refilling the seam and after sanding it came right back. I don’t know why these mustangs get such high praise, the propeller is terrible, the fueslage half join isn’t great and one of the three kits came with incorrect and mismatched parts that don’t fit together, ie the nose scoop front part of for a later variant but the back half is for the earlier variant and much narrower

AM was a small start up company here in North Carolina, back in the mid 1990’s. Most folks wanted to see the little company have a chance at being successful so not much open criticism of AM’s Mustang’s occured.

AM was the home team team, small American company daring to challenge the Japanese power houses like Tamiya & Hasegawa. Legend has it AM became enough of a pain in the market place, Tamiya and other big players purchased “tooling time” at an injection molding companies to lock AM out of being able to produce kits and bankrupt them.

Nuking new release kits like became common on the internet, likely would have destroyed AM very quickly. Besides for ~25+ year old kits they are pretty good for their era. The floor of the cockpit is correct on the AM kit unlike Hasegawa of that era. Hasegawa was then the Gold Standard.

Most of the modelers I knew back in the mid 1990’s griped privately about the fuselage and that stupid 4 part seam nose on the Mustang but purchased 4 to 12 copies of each AM kit to help the company.

In my limited airplane experience of building Mustang’s the Tamiya kit is fits best, then Hasegawa’s and last AM’s.

The local plane meister guru’s in the mid 90’s liked to OPEN UP the fuselage seam slightly with a scriber into a V shape. Thin super glue was applied to a small area and hit with accelerator. This was sanded with nail files and polished so that it was smooth and same density as plastic. The result was flawless with natural metal finishes.

After seeing that I pretty much gave up on building planes

Definitely don’t want them to get nuked as I think more variety in modelling is very important. But honest reviews would be nice. Every review I’ve seen of these kits raves about the fit and ease of assembly so I though they’d be a good way to get my feet wet again with aircraft. But they have been an exercise in frustration that has only worked to discourage me from trying aircraft again.

Had I known about all the problems I would have either waited till I got more comfortable with aircraft or never bought them. Very frustrating to spend a few weeks on them to have to give up when I know that time could of went to something I would have enjoyed more.

The nose is one of the dumber assemblies I’ve seen, it could have easily been 1 part or 2 parts max, or attached to the fueslage halves. The way it’s designed leads to four seams that need attention all of which are around fine river detail

Here’s hoping their Avenger kits live up to the hype and that the reviews aren’t just there to prop up the company again, I’m really looking forward to them as I love the avenger but if they are as bad as this kit I’ll likely sell them

The nose is one of the dumber assemblies I’ve seen, it could have easily been 1 part or 2 parts max, or attached to the fueslage halves. The way it’s designed leads to four seams that need attention all of which are around fine river detail

That was my personal issue with the kits as well. We used to joke about using another company’s fuselage and AM for the rest of the model

BTW - AM did improve. They even hired an aeronautical engineer to help with kit design. The lady was a Russian immigrant and most US companies wouldn’t recognize her degree.

The day is saved @Panzer_modeler and I are going to swap the three mustangs for his 1/48 F-51 from Tamiya.

Ezra has a tremendous amount of talent.

Mind if I chime in on a solution and give some future advice? I know a little about aircraft modeling.

Absolutely. I have a lot of aircraft in the stash and really find them interesting even though I apparently stink at building them.

Any advice is absolutely encouraged.

Ghost lines are almost always going to show up even with best practices. Now you know to expect them here’s some advice. When you cement your parts you can shoot to get some squeeze plastic goo from the seam line. Condition the plastic with a brush of cement (if using quick set) attach your parts then apply more cement. The squeeze looks like tiny blobs. Then I clamp my work and set that part aside for a few weeks. Modern quick setting styrene cements (tenex, Tamiya, Mr. Hobby etc.) will continue to flash off for weeks. Even, as Robin points out, fillers will sink because the initial cement you used is shrinking due to gas lose. Here’s another thing you might try on those models. sand the lines to remove the paint and fill with a few layers of Sprue Goo. Wait at least 72 hours between layers. Let me know if you need this clarified and will send pictures. I very rarely have ghost lines in any of my finished projects.

I use a method similar to above, but without streched sprue, or sprue goo. This works best with a tube glue so it doesn’t dry too fast - first clean the joint line to remove any irregularities, spread the tube glue on both mating surfaces and let the glue set a few minutes to soften the plastic, press the two halves together so that melted plastic/glue squishes out from the joint (if necessary clamp the two halves together), let cure at least overnight, trim off the excess plastic/glue along the joint line with a sharp blade, and finish with files and/or sandpaper.

Other things to consider, any solvent based glue or goo or filler with still contract over time. It takes days or even longer for the solvents to disperse and thats partly why seams suddenly seem to reappear out the blue.
Glueing together with liquid cements and getting the plastic to bead up between is good but you have to let the solvents vanish fully or its a waste of time.

Superglue is about the best way to eliminate but even that takes a while to go off properly.

Using a solvent (ethyl acetate) which softens the polystyrene avoids the issues of shrinkage.
The polystyrene actually swells up a bit since the neat order of the molecules is disrupted and the chaotic plastic has a larger volume than the well ordered plastic.

Pure solvent evaporates very quickly and leves nothing behind except slightly swollen plastic.
I stopped using glue with any kind of solid content 40 years ago, havent regretted it since.

Sprue-goo will shrink.
Plastic strips or shims “glued” in position with solvents will not shrink.

I too have used Robin’s stretched sprue as filler approach, and it is effective. 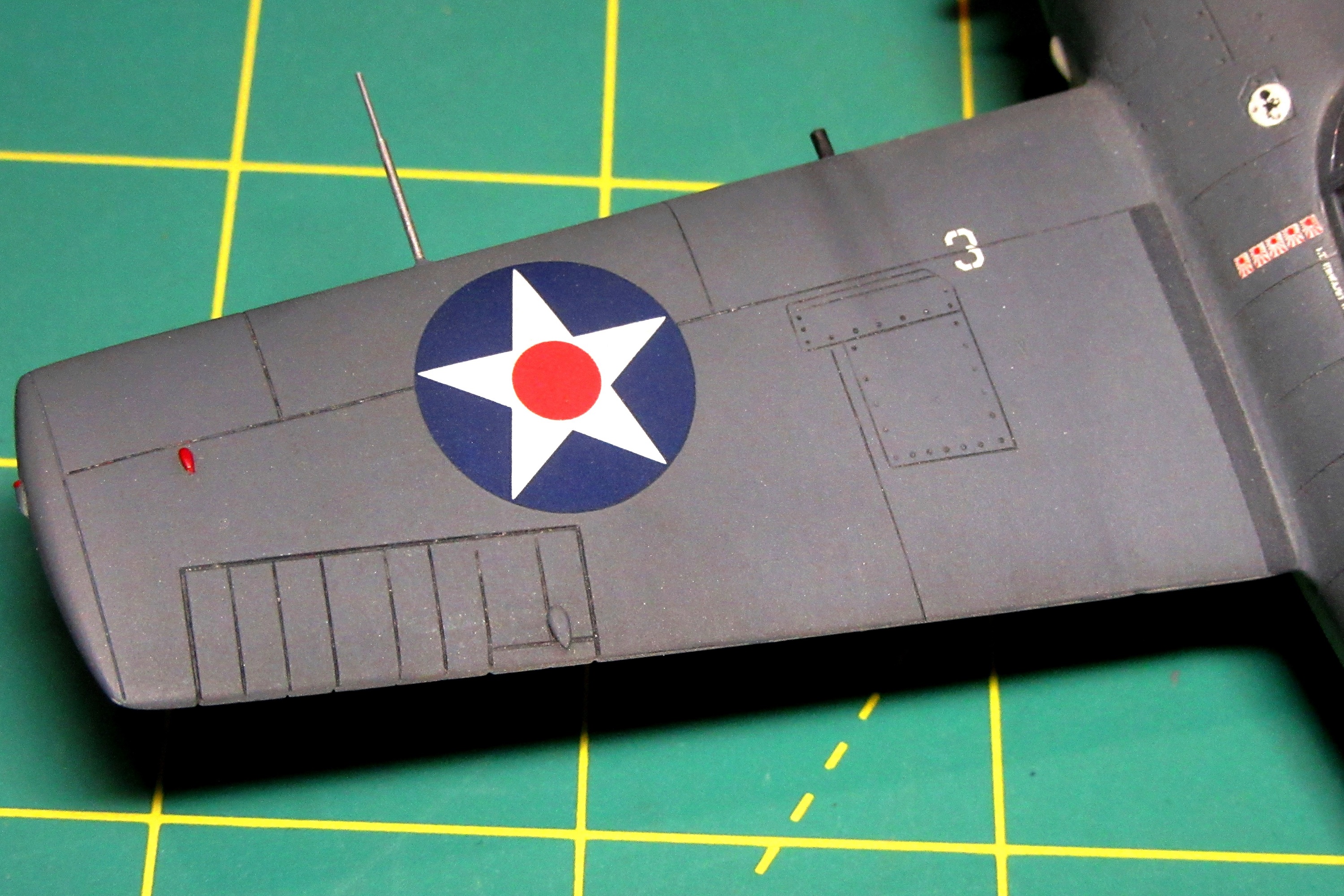 Since then, though, I’ve become a convert to cyanoacrylate (super glue) as filler. It is easier, faster, and has the advantage as a filler for mating surfaces that it actually makes the joins stronger as well.

Either way, you can’t go wrong!

This is very similar to the advice I gave toward the bottom of this thread last week:

@Dioramartin - they look very similar in daylight, the difference really is barely visible. @18bravo - The sprue goo is just old pieces of sprue dissolved in Tamiya Extra Thin. I makes a great filler for seamlines as it bonds to the base material and sands nicely because it is styrene. The downside is that if it is applied thickly (like I did here) it takes a few days to fully cure and can shrink a bit. I will report back and show how it progresses. @Joel_W - I’m leaning towards the black pr…

Not that blurb but a bit farther down…

Except that for aircraft you really don’t want to use a nail polishing stick - it’s easy to be too aggressive and flatten the profile. I myself am partial to the Flex-i-File for such applications. If you don’t have one I’d highly recommend it.,

This really boils down to learning a new skill. Seam hiding is a major skill. Relax, work on perfecting it and you can use it on most other types of kits. Armor kits seem to be at a high point engineering wise. Other topics like aircraft and ships are starting to improve the engineering so there are many kits still being made that are under engineered by today’s standards and the seam filling skill will go a long ways to improve those kits. My least favorite are the wing root seams.

Yeah seam filling is something I need to work on. I’m going to try stretched sore and super glue on my next build, an Me-262.

A nice thing I find about armour kits is you rarely have long straight seams that attract the eye. Things tend to only run a couple inches before running into a corner or box, or whatever at an accute angle so seams are rarely long and straight. Also armor tends to have more going on so the engineers have an easy time hiding seams on the underside of things. Not much can be done to hide a long seam right on top of a kit

Yes stems from manufacturers not thinking out of the two part fuselage box, a few have on occasions but not many. Using natural joints making a fuselage out of 3 parts for example.