The Mark VIII Tank, also known as the International or Liberty tank, was perhaps the first multinational arms development. The British/American design was the ultimate expression of the rhomboid tank philosophy. The automotives, cooling, and electrical system were supplied by the Americans. The guns, tracks, and armor plate were supplied by the British. The French built a new factory in France for the assembly of the kits by French colonial labor. The war ended before the tank went into mass production in France. However, the US Tank Corps lacked heavy tanks, so the US assembled 100 Mark VIII’s at Rock Island Arsenal in 1919. These used the US Browning machine guns instead of the British Hotchkiss, and further omitted the two machine guns on the turret sides. The tanks served in the US Army until 1932.

This is the Vargas Scale Models 3D printed kit. This is the only kit of this subject currently available in 1:35 as the old Commander Models “cheese block” resin kit is out of production. The kit consists of 34 parts printed in grey resin. Vargas is using a different resin which is not brittle. The kit provides both Hotchkiss and Browning MGs so that either the American or British version can be built. The detail is good, and the tracks are simply excellent. Striations are almost non-existent on this kit. 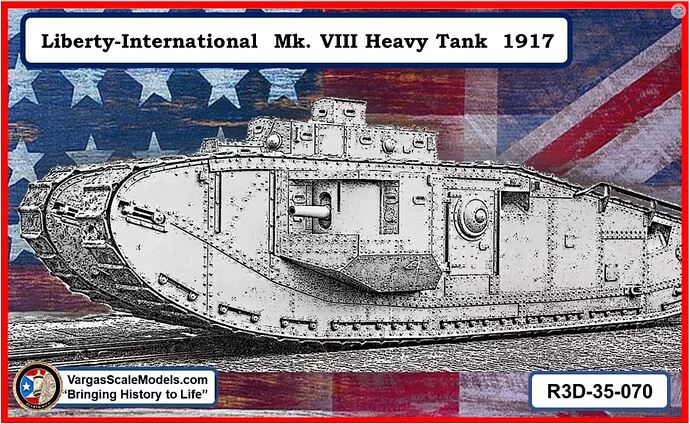 I decided to build mine as a US version in the 67th Infantry Regiment. Although the kit includes the Browning MGs, I had to carve off the side MG mounts on the turret and scratch blanking plates from styrene and Meng rivets. The specific tank that I was modeling also had a tow cable on one side, a signal semaphore on the turret, and rear deflector plate that were omitted in the British version and the kit. I scratch built these items. The kit went together well although I had to do quite a bit of fitting to get the sponson/track parts to snap into place on the hull easily. I would also pin the unditching beam rails to the hull with some rod as my thumb kept finding them and popping the CA bonds. 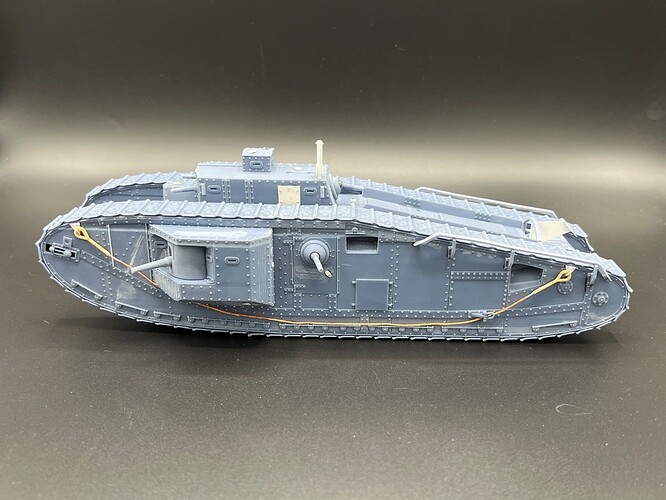 I commissioned custom decals from modeling friend Mike Blackwell. These really brought this large monochrome model to life. I also added a couple of tarps from Value Gear to add a bit of color. 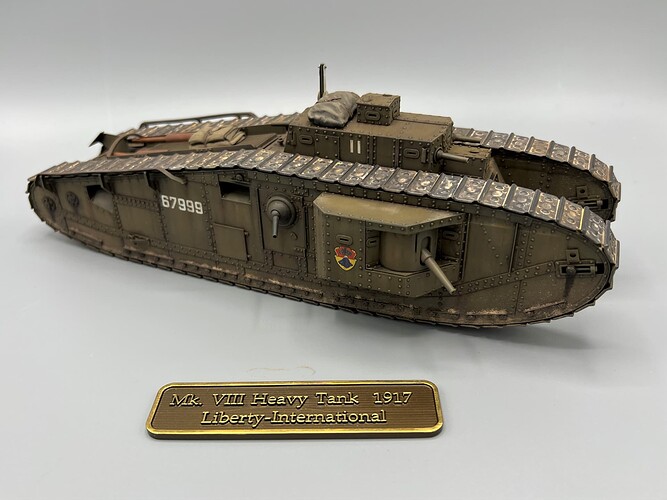 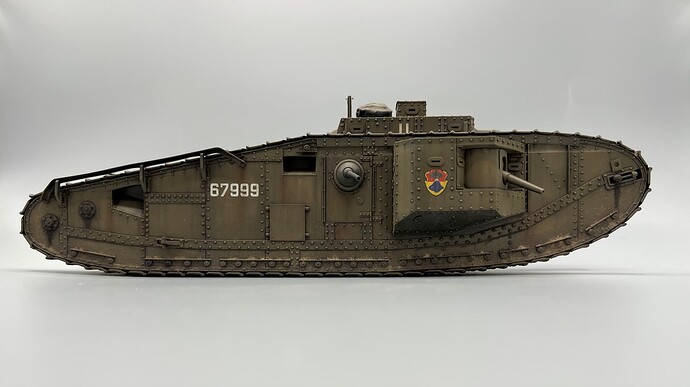 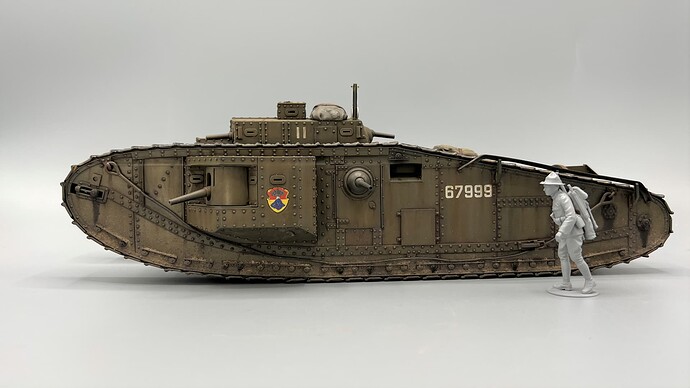 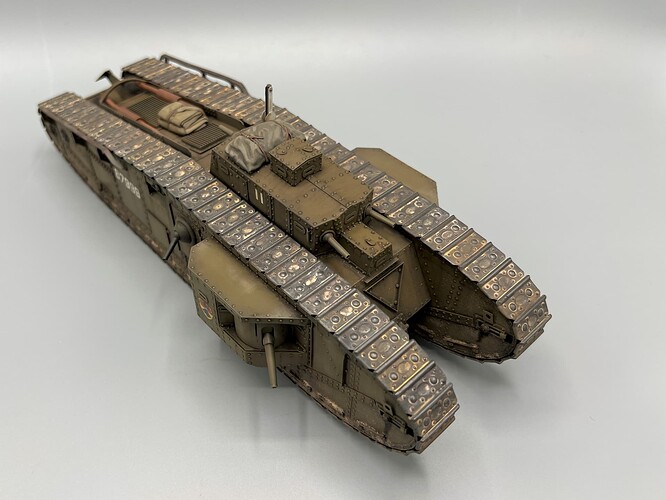 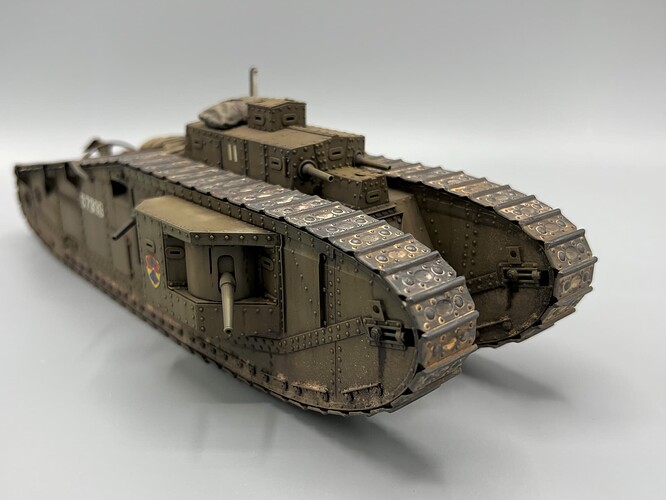 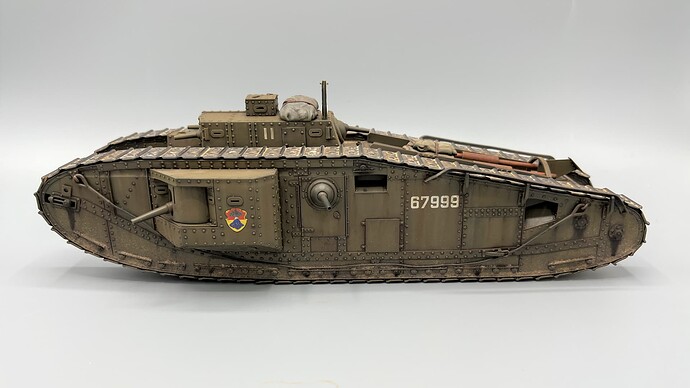 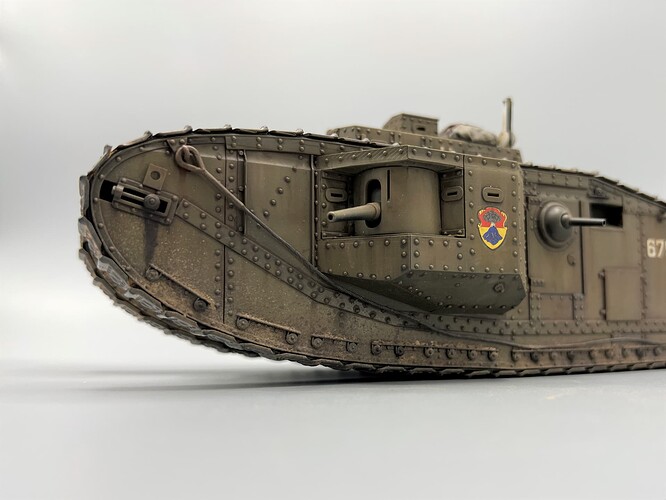 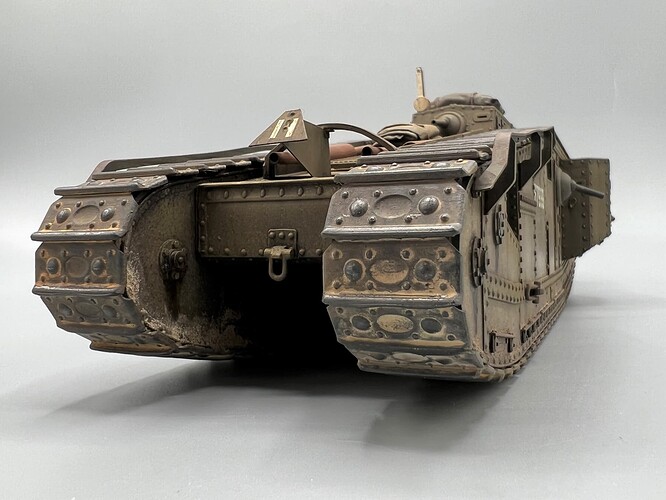 I am really happy to have this one in my collection of interwar US Armor.

Very nice. Great job on it.

WWI/post war not my thing but I really like your rendition of this vehicle.

Very nicely done. You should be really happy with this one.

Thanks guys! I’ve wanted one of these for a long time. The kit is great. It is big and has a ton of rivets, so the weathering took a while.

I was reading about these tanks only the other day so it’s really nice to see a model rendition of one, especially so beautifully finished.

Thanks @Chepster. This is a fascinating vehicle.

Thank you @MartinJQuinn ! It was fun to paint and weather something so large - it is a large canvas.

Really excellent work. It is nice to one of these painted up as well as you did. I would imagine it took some time to get it looking so good. The way you weathered the tracks really adds to the overall realism. Thanks for taking the time to photograph and post you work.

Terrific job… Those WW1 tanks have something ominous about them. Big, lumbering hulks bristeling with weapons. Back in those days I can easily see how the could have caused mayhem all around the battlefield… You did this justice with the way you painted and weathered the kit… Will you put it in a (small) dio? I think this would do it even more justice!