Need a help. Painting with airbrush with Tamiya colors acrilyc. I dont know where made a wrong, but when I remove the masking tape or masking liquid, pull the the paint surface too.
Thanks!
Tibor

Did you stick the tape to something else first, like your arm or a desk top to make it a little less sticky? That often helps it not stick to the paint as strongly. Also, was the paint underneath fully dry or on primer?

This is also question how long time to need wait for paint again? 24 hours? Or more?
Never used primers

I’ve heard lots of people quote 24hrs but I’ve found Tamiya paints very robust. On these crosses I sprayed the white, then let it cure for a couple hours, and then masked and sprayed the black 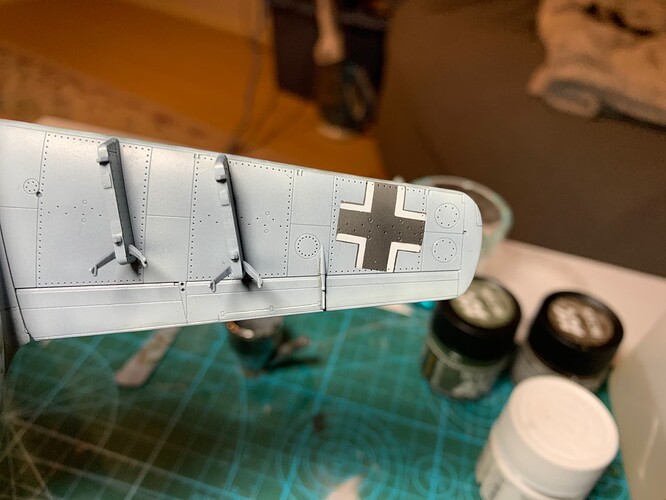 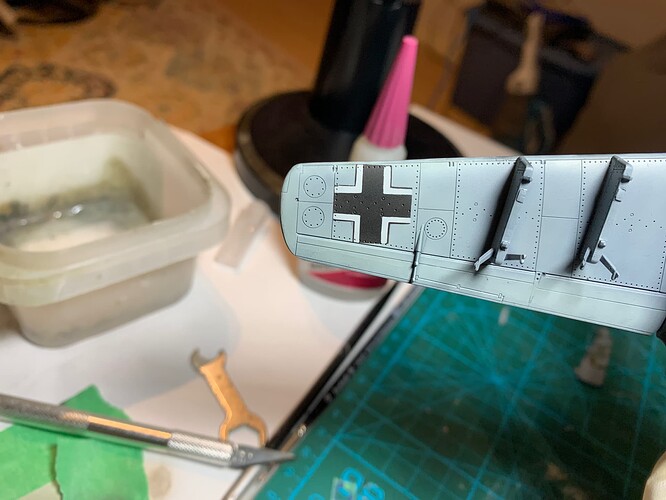 I’ve found a couple things help. As @brekinapez suggests, detack the tape first. Second, only leave the mask on until painting is done. I pull my masks right after the layer overtop has dried. I find if I let masks sit too long they pull up paint.

Third, I always use Mr surfacer as a primer so your mileage may vary. An important note, I use Tamiya lacquer thinner which I I’ve found gives a more durable finish than their other thinners.

Yes, try to remove the tape as soon as is safe to avoid the stickiness bonding further to the underlying paint. I also use Tamiya as my primary although I still get the occasional pull-up on certain colors like silver or white (white is a notorious Tamiya color anyway as it seems to resist thinning). As far as primer I use Stynylrez for aircraft and vehicles with lots of tiny, fiddly bits. On tanks and cars I actually use regular spray paint like Krylon or Rust-Oleum (Don’t use Gloss Black as it takes forever to cure).

All you see here is masked using the Tamiya 4mm along the edges of the color and covering the rest of the plane against overspray using regular blue painter’s tape and newspaper. 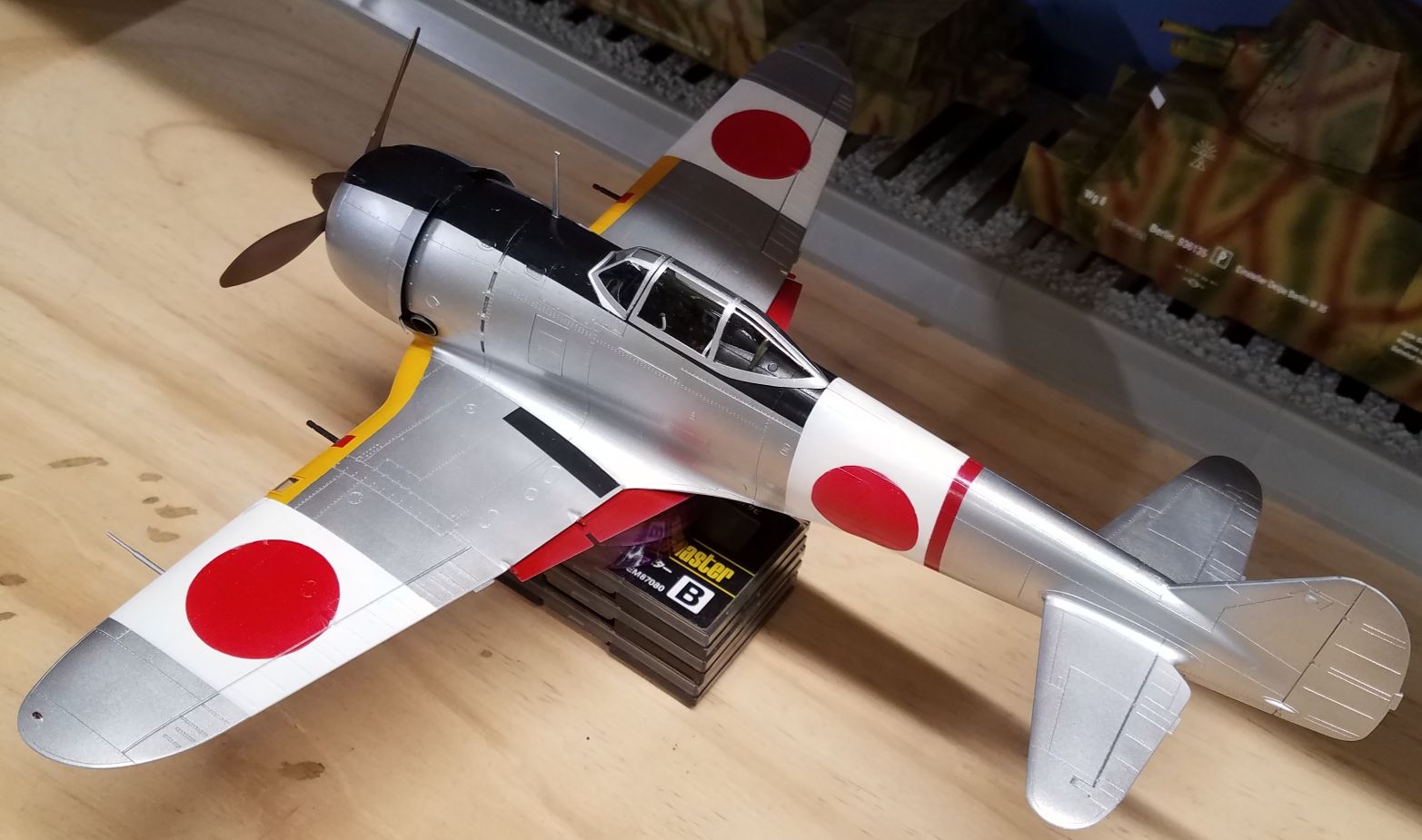 Yes, try to remove the tape as soon as is safe to avoid the stickiness bonding further to the underlying paint. I also use Tamiya as my primary although I still get the occasional pull-up on certain colors like silver or white (white is a notorious Tamiya color anyway as it seems to resist thinning). As far as primer I use Stynylrez for aircraft and vehicles with lots of tiny, fiddly bits. On tanks and cars I actually use regular spray paint like Krylon or Rust-Oleum.

Thanks a qiuck answer. Everything is very helpfull. I am realy angry about this, because now make H1 rotor since one month… 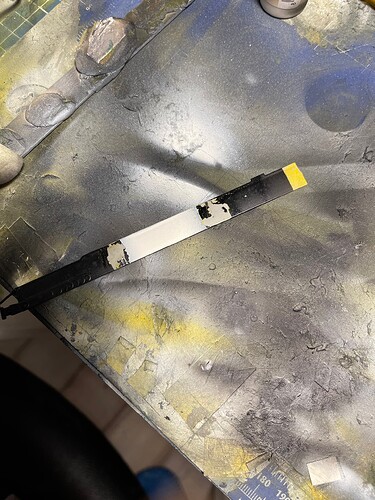 I see the black that pulled off; was there any paint in the large area of silver or was that unpainted? And am I seeing gray paint under the black?

Yes, i started with yellow, then white, after black. Grey is the basic color of rotor

So the grey under the black is the plastic, and what looked like silver on my monitor is actually a white band between the black areas? Everything was Tamiya, correct? You said no primer was used. Did you wash the sprues to make sure there was no release oil left from the molds on the plastic? That can interfere with the paint sticking to the plastic. Also, some plastics seem to take paint better than others.

Sorry, the white was Valejo. But the others are Tamiya. I dont understand, because never happend this. This is Italeri plastic.

I have a bunch of Italeri kits but unfortunately the last ones I built were when I was still using Model Master enamels so I don’t know what Tamiya is like on them. But if this hasn’t happened before its likely not the plastic itself.

Right now all I can suggest is following some of the advice above, and taking more time between colors to make sure they are drying thoroughly, and maybe pull the tape of slowly as if trying to avoid setting off an explosive.

Thanks. This is my first Italery, as usual I build trumpeter, hobby boss, tamiya and hasegawa. So my oppinion this paints and the plastic are not friend…

One thing I’ve found that goes with the above is to pull of the tap close to where it attaches. I.e don’t kit pull from one end and pull it off in one strand but rather ease it off

Thanks @Mead93, but pulled not in one piece. Tried to separate then pull, same situation was.

Hmm, weird, it sounds like you did everything right. I’m shocked you got that much pull up with Tamiya paint

As I said earlier maybe Tamiya is not friend of this plastic or need wait 24 or more hour for the next layer, but i am not sure.

What is the good masking tape? Using tamiya, but sometimes the paint flowing under the tape.