I don’t know if this was discussed before but I have read that Meng’s 1/35 AMX-30B2 (TS-013) as depicted in ODS is actually 30B model not 30B2.
I have no knowledge in the French modern AFVs so can you help me with what the differences are between the two (besides the obvious side skirts) and how one can correct it to make the kit to 30B2?

Wikipedia:
"During the production run, many improvements were implemented. These included gun stabilization from 1971, and from 1972[55] replacing the original coaxial heavy machine gun with a dual purpose 20-millimeter (0.79 in) autocannon against light armour and helicopters, with the ability to depress to −8 degrees and elevate to 40 degrees.[45] All French army vehicles were eventually brought to this newer standard; the designation remained AMX 30B.[56]
An AMX-30B2 BRENUS, note the number of ERA blocks mounted on the turret.

Beginning as early as 1973, only seven years after the beginning of production, the French began a research program for a future modification of the tank.[57] The project was to result in a AMX 30 Valorisé (“upgraded AMX-30”).[58] In June 1979, the French Army decided to both build new and modernize existing AMX-30s with an improved fire control system and a new transmission, and designated them AMX-30B2s.[59] The first new production vehicles were taken into service in January 1982.[60] Improvements to the COTAC APX M-508 fire control system included the installation of a laser rangefinder and a low-light TV (LLTV).[61] The main gun’s lethality was improved with the introduction of a new armour piercing fin stabilized discarding sabot (APFSDS). The original engine was exchanged for an improved variant, known as the HS-110.2, producing 680 horsepower (510 kW). The poor transmission was replaced with the semi-automatic SESM ENC200 transmission (now RENK France), with a torque converter. The suspension was improved by adopting new torsion bars and shocks, which increased the vertical deflection range of the road wheels,[62] thereby improving the tank’s off-road mobility.[63] From 1998, the French army started to replace the engines of its remaining AMX-30 tanks and variants with 500 Renault Mack E9 750 hp engines.[64]

In the nineties, a reactive armour package, named BRENUS or Brennus,[65] was developed for the AMX-30B2, but was issued only to two tank regiments, which in peacetime were combined into the 1er/ 2e Chasseurs, that were part of France’s rapid reaction force;[59][66] the other two regiments using the AMX-30, the 2e/5e Dragons,[67] only had their tanks adapted for a possible relatively quick upgrade, in case of an emergency.[64] The BRENUS system used 112[68] GIAT BS (Brique de Surblindage) G2 explosive reactive boxes with a total weight of 1.7 metric tons (1.9 short tons), offering a protection equivalent to 400 millimeters (16 in) of steel at 60° versus shaped charges[64] and more than 100 millimeters (3.9 in) of steel versus kinetic energy projectiles such as APFSDS.[69] During the 1990s, the AMX-30 has also been used as a testbed for several stealth technologies, including air cooling of hull surfaces and the use of visual camouflage. This prototype is known as the Démonstrateur Furtif à Chenille.[70] Its hull and turret are fully covered by a superstructure built of angled plates made of radar absorbent material.[64] "

Hey Robin,
Thanks for the info. Any idea as to how to correctly depict Meng’s 1/35 AMX-30B2 as used in DS? What is incorrect with it? What makes it more like a 30B instead of 30B2? Or did I read it wrong?

Quite honestly I haven’t got the foggiest idea.
I hope some of the French armour experts can answer.
Cheers!

According to this thread from a French forum, the kit includes 4 sprues for the B2 version specific parts :
https://heller-forever.forumactif.com/t457-meng-char-amx-30-b2-daguet-1-35eme-ref-ts-013

But Olivier is the one to ask 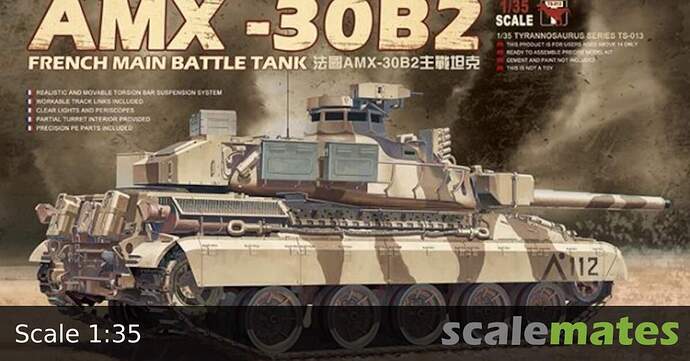 One user wrote: “Meng did the same with its B2 and its B, but in reverse, the B has a full B2 chassis”

That thread is about the Heller kit. Who ever gave you the info about the Meng kit being wrong just didn’t know what they are talking about. The Meng B2 kit out of the box is what it claims to be and is the one used in`91.

To put it in a nutshell this is right!

However Meng did a mistake with the tow hook. There is only one so you need to choose between adding it on the front right fender in the stowage bracket or adding it to the tow position.
You can choose to depict the muffler flap open or closed. The closed position is only used when deep fording.
Last option concerns the number of antennas: 1 is for a subordinate tank, 2 for a platoon leader or squadron commander and 3 for the regimental CO. This should match the side skirts number. Unless it ends with a 0 it is not a leader’s tank.

Excellent! Thank you for the info, Oliver. Very helpful.

Beenthere, that’s a relief to hear! On a second reading, I think I read it wrong - probably lost in translation. What the blogger was saying was that both Meng’s B2 and B have the full B2 hull, while Heller’s are all B hull for both B and B2 kits.

while Heller’s are all B hull for both B and B2 kits.

Right Heller didn’t bother modifying the plastic part. However in their Daguet AMX 30 B2 box you get a number of resin parts to depict a correct AMX30 B2 rear hull. I’m not sure though if they give the different shock absorbers.