Meng has an excellent set of finger held Drill Bits for $8 from Sprue Brothers. Found these to be an excellent tool.

I pick up a set several months ago and have used on my last six or so build projects. The Meng drill bits became my drill bits of choice. Found with the Meng set I seldom use the mini Micro-Mark set and pin vise these days.

The .4mm to 1.3mm selection proved
handy with the newer kits. After breaking the .4mm bit decided to pick up a spare set. Sprue Brothers has the Meng Drill Bits back in stock.

Thought these were worth mentioning as I’ve had a lot of use out of them. 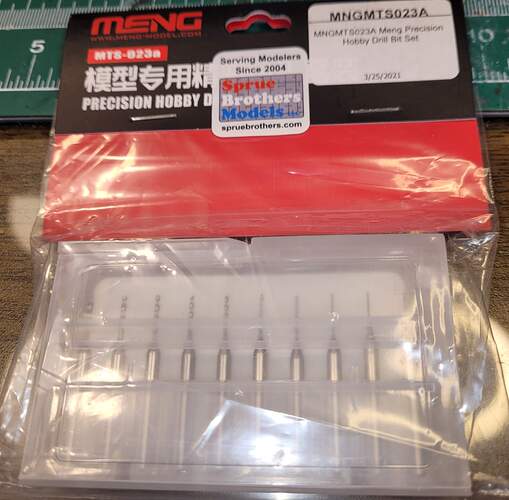 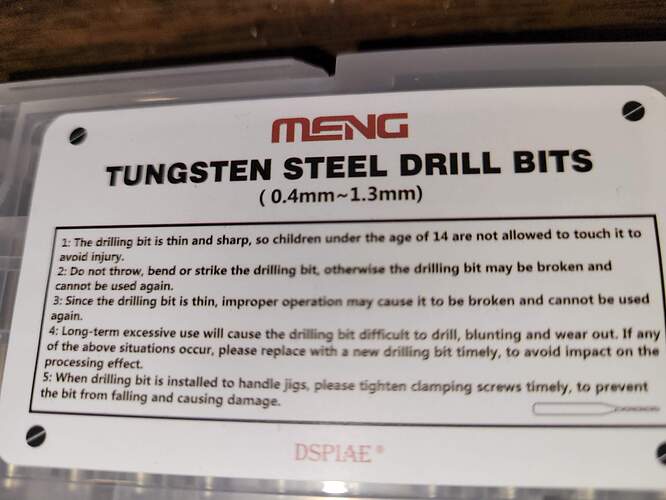 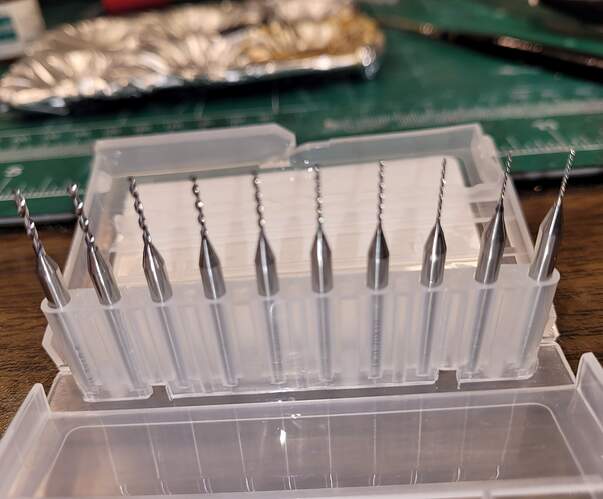 I agree. Heavily used and I need some more. 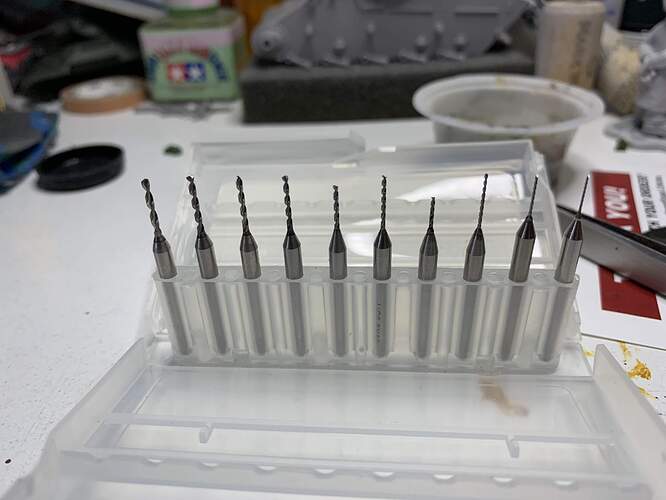 I thought they costed more but I was mistaken. I had gotten this local set from the hobby shop for $20.

Thanks for the tip. Ordering now.

They ARE very good bits…BUT…go easy when handling them as they can snap just by lookin at them the wrong way…! Ask me how I know…

The bits with color-coded collars are a big plus for me — cheap enough on Amazon.

Ditto that, they do a good impersonation of a hypodermic too!

Harbor Freight also for US based builders, always in stock ‘around the corner’ from me. Nice plastic case to keep them from getting dinged up in the drill bit drawer. Fair warning, they have zero tolerence if you get on them from an angle, easily snapped in those diameters obviously. But I d like the shank size when you just need to give a run without chucking them into a pin vice.

I was in there a couple days ago, and saw a complete set of number drills for $20!!! I used to buy all my drill bits from ENCO, but they seem to have gone away. I found another vender that sold just about any size you wanted in small envelopes containing six to eight drill bits. The end price was less than a third of what the LHS was getting. Plus they had several styles of drill bits and even micro reamers. One that really interested me was a solid style that was not the standard twist drill bit. These are much harder to break. I’ll find the web address, and post it
gary

The problem of the very cheap one sometimes they don’t cut very well,because they are very brittle I brought some big set from here…

take this from somebody that drilled dozens of holes every day for a living. Your standard two flute twist drill will not drill a round hole. Nature of the design. A four flute is much better, and an uncommon six flute is that much better. You don’t see it as much with a pin vise, but the regular drill bits also tend to wonder unless your using a guide bushing. Not uncommon to see them move about ten percent of the diameter or even more. This is why you always drill a hole in steps going from a smaller drill bit to larger ones. For a round hole, you really want to finish it out with a reamer that removes about .010".

The above is why you almost always try to punch the hole with a two flute end mill in a milling machine. Then ream it to size. Another issue you get into with a pin vise is the surface speed of the cutting edges verses the material your cutting. A typical # 60 bit in steel wants a minimum of 3000 rpm, and with plastics your lookinh at 4800rpm. Never going to get there with a pin vise! Never liked carbide all that much, and there are different grades of carbide. They break too easally and are a real bugger to remove.
The strait flute carbide drills are far better, but also a little more noney. Still they are harder than your ex wife’s breath in court.
gary

by the way the drills I was refering to that were a softer grade of carbide and have strait flutes are known as “Hi Roc” drill bits. Who sells them? I cannot say, but rate them as the best of all
gary

So is tungsten bad for the modeling application of drilling holes in kit parts and sheet plastic?

I really think you missunderstood what I wrote. Carbide came about because we developed metals that ate up high speed tooling. You found yourself sharpening the high speed tool six to eight times a day. Softer, or less tougher materials didn’t really benifit from carbide. Yet at the sametime the actually sharpening (or creating a cutting tool) of tools was becoming a black art. The younger you are, the less you learned about surface cutting speeds and tool shapes because there was inserts in a plastic box. Add to this, much of the older machinery was never designed for carbide or ceramics. Reason why is tool pressures. Carbide is known as being on the high end of the scale because it doesn’t cut material; it just pushes it off. High speed for the most part shears the material off in a knife like fashion. Tool pressures are far lower (this has many advantages)

Originally there was maybe one or two grades of carbide, but now there are many. Even carbide with diamond impregnation. You ask if carbide was bad for drill holes in plastic. I don’t see where it’s needed personally. Plus carbide anything is usually much more expensive. Your not cutting a pre heat treated steel or something seriously tough. Plastic doesn’t work harden like some metals do, so I see little if any advantage except to the seller. What I would recommend is the use of TIN coated drill bits (the gold colored ones) or cobalt. The latter is a couple three points harder, but doesn’t shatter like carbide. And it’s cheaper. Hole quality will be the same; I hate to say. One issue with plastics is the material getting hot and melting. I’ve seen folks use strait water, and hand soap. Bees Wax is supposed to be the best (have never tried it). The idea is to keep the plastic from attaching itself to the cutting tool. I do know that bees wax gives a better finish, but as I said I’ve never used it. Then we usually find ourselves relying on the good old pin vise (I do). The material never gets hot because we are going too slow actually.

if your buying drill bits from a large seller, then tell them you are cutting plastic! Normally the lead angle and relief are for steel. Plastics need something different. They’ll cut better. Those real small drill bits are not really meant to resharpen, so you just toss them (or reuse the shanks for pins). I would like to see how they grind them! As for lubricant; I’ve had good luck with liquid Dawn cut 50/50% with water. There’s better but also costly.
gary

I understood what was said. Just checking for additional insights that apply to drilling holes in .020 pieces of plastic or plastic parts to see if there was more to discuss.

The Meng Tungsten bits cut holes in plastic very nicely. I seldom need a pin vise for them as they work great finger held and spun. They do seem a bit brittle.