Hi there team, I am currently working on Meng’s King Tiger kit (TS-031).

See below snapshot from the instructions, can anyone shed some light on the two options circled red / green? Is this a change in production with a certain date of change implementation? or maybe something more complicated like different factories providing the different parts?! 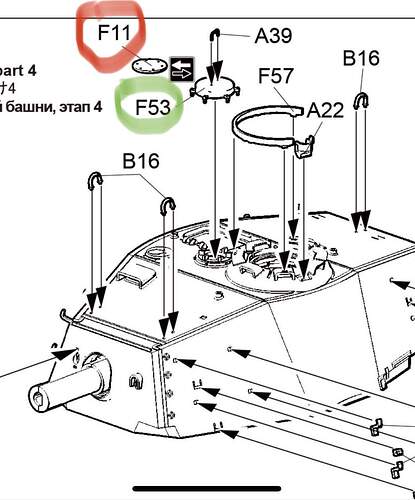 I believe F35 is a cover for deep water fording? Not time specific.

F-53 is a waterproof cover, seldom seen in service.

Thanks Dan, Gerald. Now that you say that it makes sense, as it looks like part F53 could slip over F11. Presumably if one was to use the waterproof cover there would be other waterproofing features used in conjunction on other areas / parts of the vehicle?

I believe F11 is the cover for the turret fan housing. F53 as mentioned above is the water proof cover.

Another query on this kit……. there is an “optional” part labelled F14, which is a hook / latch for the engine access hatch (circled green in image below).

Can anyone fill me in on this? is there a specific time when this feature was introduced / discontinued?

Many thanks in advance 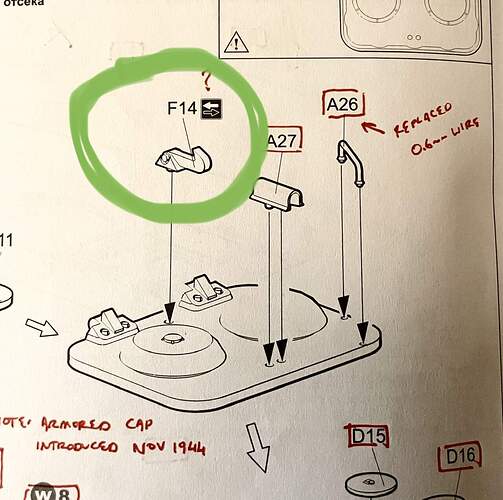 According to the Achtung Panzer volume, this hook is a feature of the late model engine deck, but no indication of when it was introduced

Hi @varanusk, thanks for the info. I’m modelling a circa September / October 1944 build, do you think this would be to early to feature the part?

Honestly I have no idea, however other “late” features on the same drawing of this book are marked to be introduced in that date or before, so I would say you should add the hook.