Meng Leopard 2 A7+, Washed and filtered

Looks cool in black. will be nice to see the comparison with the RC NATO set as I just got that set and few individual pots from AMS.

I shall do said spray outs and share Olivier @Bison126 and John @Johnnych01.

Yeah I think it looks like it could be the Bat Tank, just has that modern Batman hardware design flavour to it!

That sure looks like a huge black cat, very nice!!

Thanks Bert @bwilt and Tamas @Agriamodeling. It’s almost a shame to paint over such a nice finish!

The spray out with Tamiya and AK Real Color is done. I sprayed all colours mixed 50:50 with Mr Color Levelling Thinner through an Iwata Revolution at around 15psi. Some was masked with blu-tac but mostly just freehand.

As always the Tamiya comes out dead flat, however the AK is more satin in finish, except for the brown, which comes out very matt indeed.

Green. I find the AK is a brighter colour than the Tamiya. Both are great as a starting point but I think I will be going with the AK.

Brown. Very similar but the granular finish of the AK makes it look more different in the pictures than it actually is. There seemed to be much more pigment in the bottle than the other AK colours. Need to try the AK with some satin or gloss varnish added but will probably go with the Tamiya for brown.

Black. Really quite a marked difference. The Tamiya is very much darker, more of a light black than the AK’s very dark grey, if that makes sense. If the AK looks a bit patchy in pics it just hadn’t fully dried yet. I actually tried highlighting the Tamiya with the AK sprayed directly on top and I think this may be the option I go with.

So a mixed result really, a bit disappointment with the difference in finish of the AK brown, which I mixed the life out of, but I really like the green the more I look at it. Tamiya is as consistent as always. The great thing is that we can mix and match these paints as much as we like.

The right side or the Abrams hull and Lancer body is Tamiya, left AK. Last pic has the centre Tamiya NATO black sprayed over with the AK as a highlight.

I hope y’all find this useful! 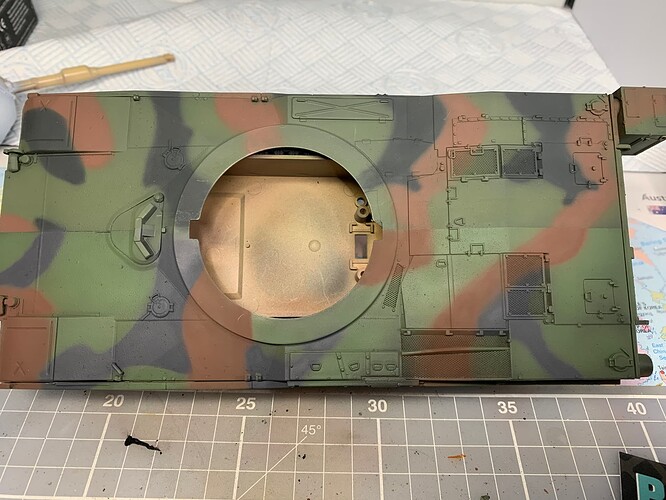 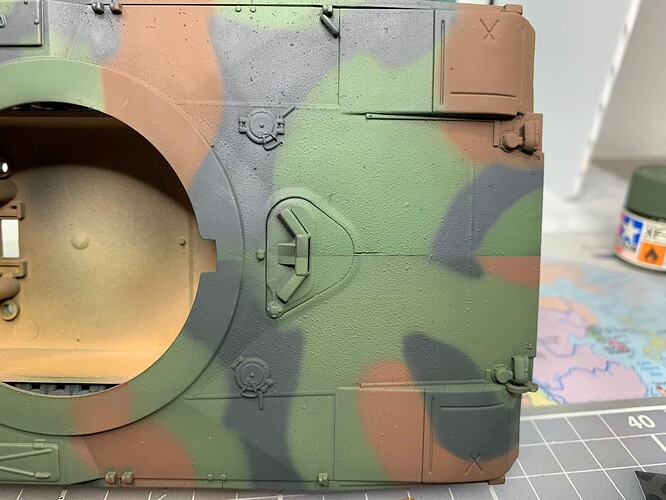 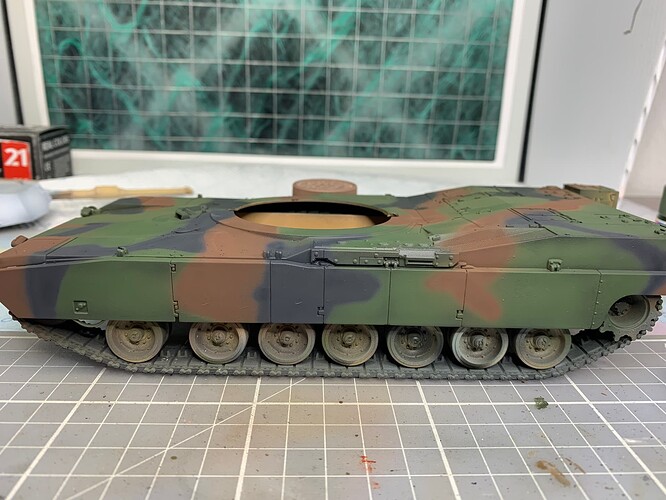 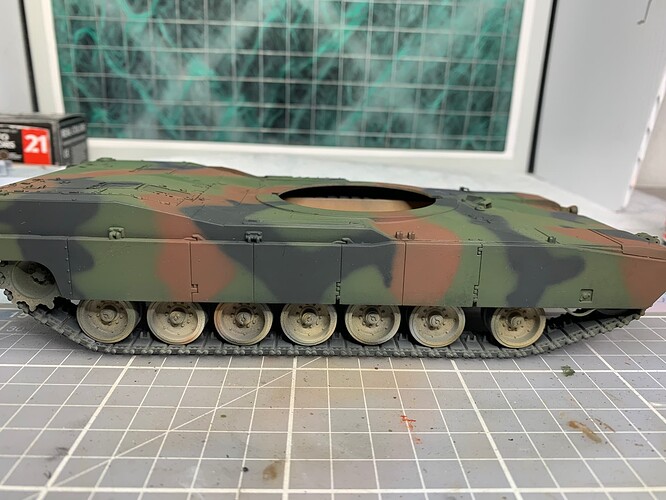 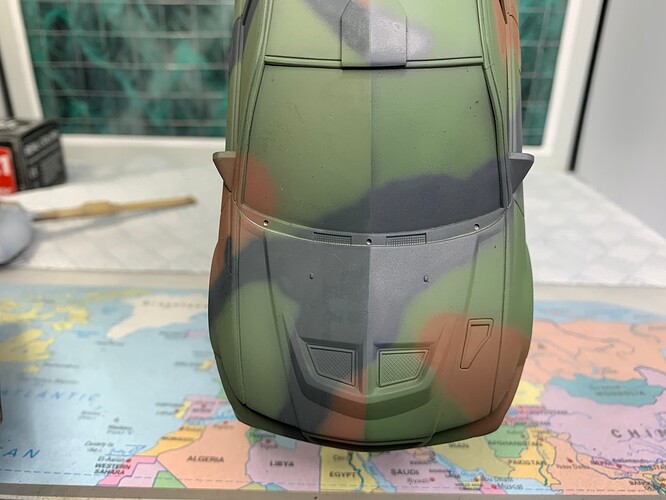 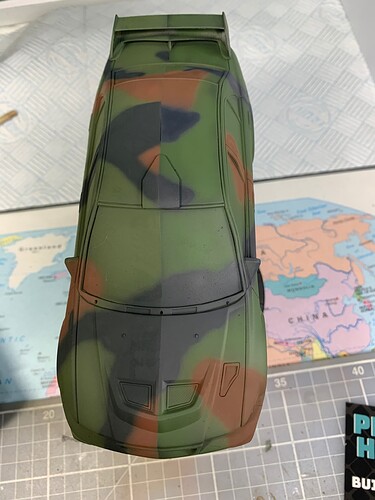 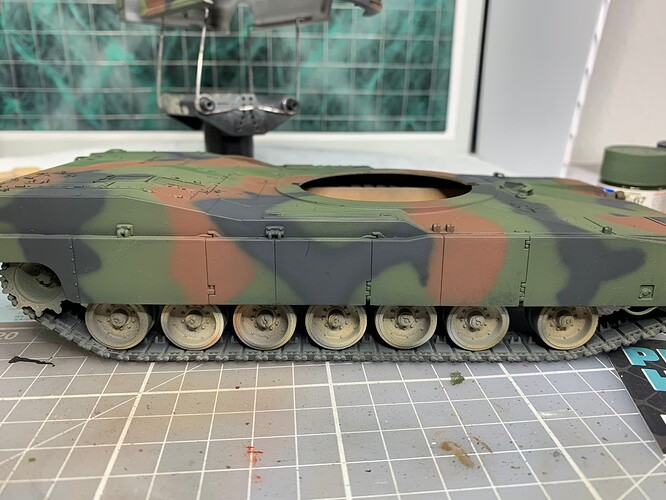 Good comparison with the paints Jim. I’m not to keen on the AK NATO black, it looks to grey to me, but could work for an older faded version. I like the green and brown. The forest green I used on my Stryker went on a dream and stayed super flat. I think I will just alternate between the Tamiya and AK NATO colours depending what vehicle I’m doing
Love the Lancer in DPM… Looks very very good. Reminds me of the Duke of Westminster and his DPM Range Rover he outfitted himself.

Nice shooting Jim and beautiful finishes. I shoot both these paints exactly the same way and find them to be out-freaking-standing. They are all I ever run through my guns anymore. Tamiya has always been the old standard and AK Real Color’s color range is just what our hobby needed with the demise of Floquil.
Smooth as silk every time and clean up is sooo easy. No tip dry, no spatter, no clogging, just airbrushing joy.

The photo taken from the turret bottom looks like a car front hood, side mirrors and windscreen fully camo painted to my eyes.

If you had another turret, you could scratch-build a Sci-Fi vehicle easily

There seemed to be much more pigment in the bottle than the other AK colours.

This is the only complaint I have with AK RC. I’ve got a dozen or so colours now and there are a few examples, my NATO brown being one of them, where there are vast differences in paint consistency.

Your comparison shots are greatly appreciated though. I’m also going to be sad if that Lancer doesn’t become some sort of post-apocalyptic death wagon.

That has to be a slow time side build Jim… A very dirty grungy beat up look, some armour plating and mesh over the windows and a roof mounted Gatling gun…go on…

Half a zombie hanging of the fender… yeah, that would make a nice picture…

Nice shots of the paint, must say that the only real obvious difference is to me the black, AK being indeed more dark gray than black… but hey… aren’t there about 50 shades of grey?

Thanks for the comments guys. Yeah John @Johnnych01 Tamas @Agriamodeling and Don, Mad Maxing the Lancer would be an interesting project, but it has a very productive future as a paint test bed, this is only its second change of scheme, the abrams must be 20+ coats deep by now, and the details still stand out pretty well…!

Don @Canmedic , it’s good to know you have the same experience with the AK NATO brown. I think just some satin varnish added would help.

Yeah Bert @bwilt the black is the most different for sure.

Matthew @Johnnych01 , I really do like the AK paint range, I prefer the more silky finish than the Tamiya, which I always add gloss varnish to for that very finish which makes weathering and decals much more straightforward.

Just for the hell of it, here’s a couple of pics of the ultimate lifted lancer, no problems finding a parking space in this! 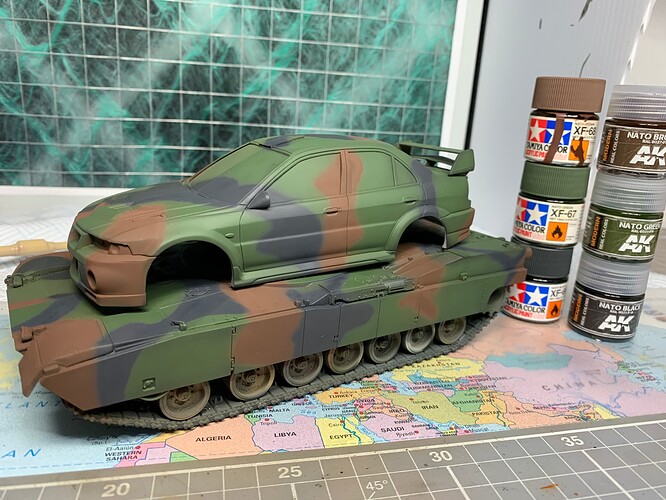 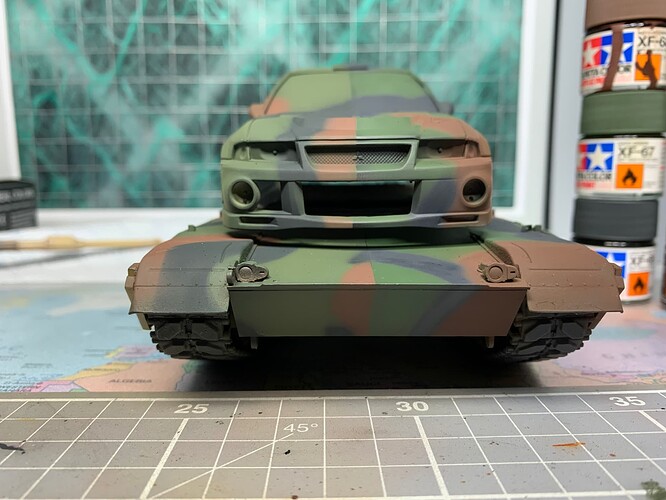 Well, actually the turret of the Leo2A5 and upwards looks great even on its bottom part but anyway…. The Lancer in the NATO scheme looks impressing! I would vote to Mad-Maxize it. 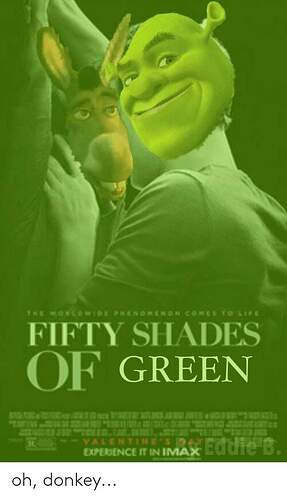 That’s just wrong on every level

Ok, back to the model. Went with the AK nato green, with a little Tamiya x22 clear. It looks lighter in pics than it actually is. Next job is mixing up a lighter shade with a little Tamiya yellow-green added for highlights. Can’t believe I spent almost two hours spraying this base coat, it’s a big old cat!

Thanks for looking in,

Oh, and I’ve been promoted back up to regular, so I can edit my titles again! 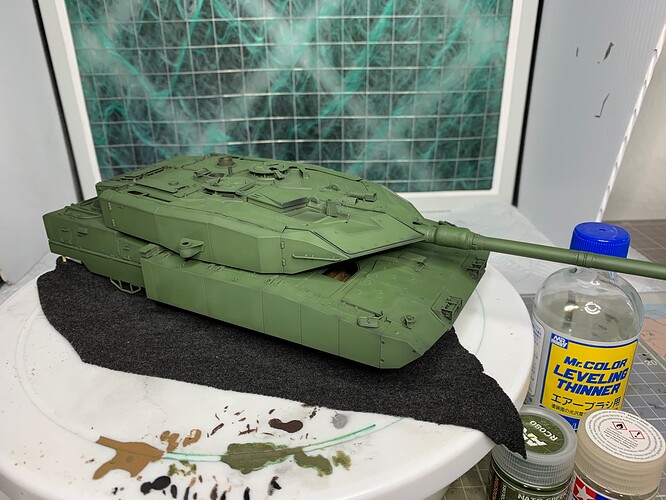 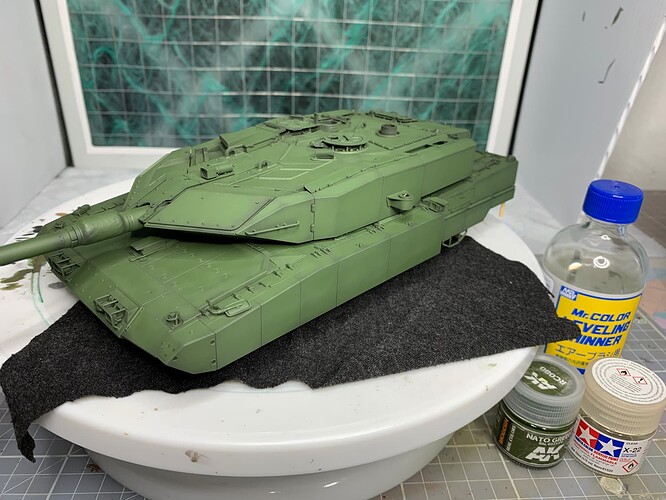 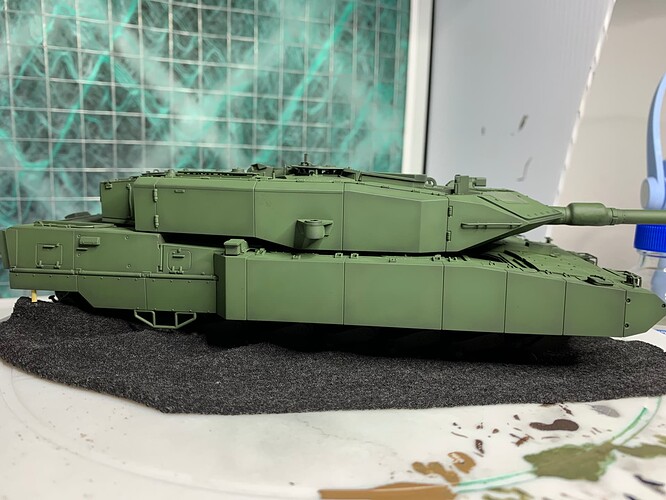 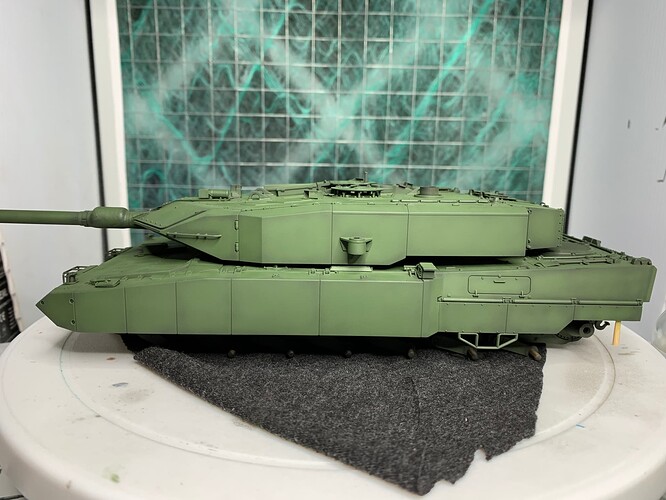 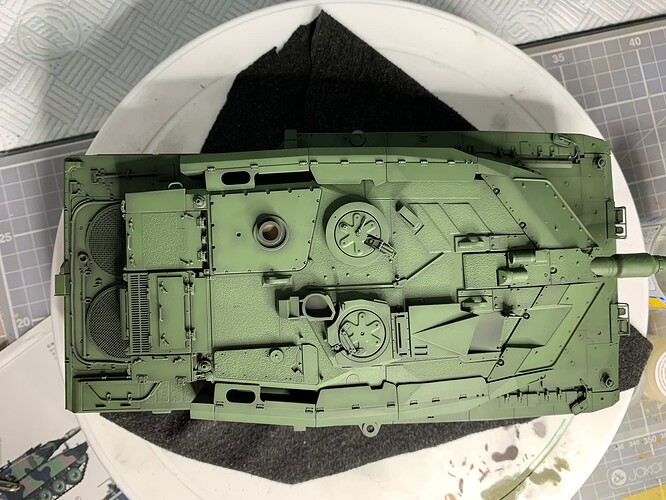 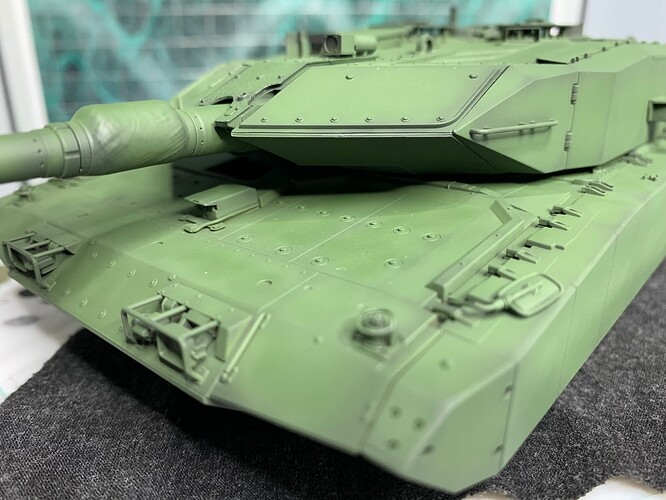 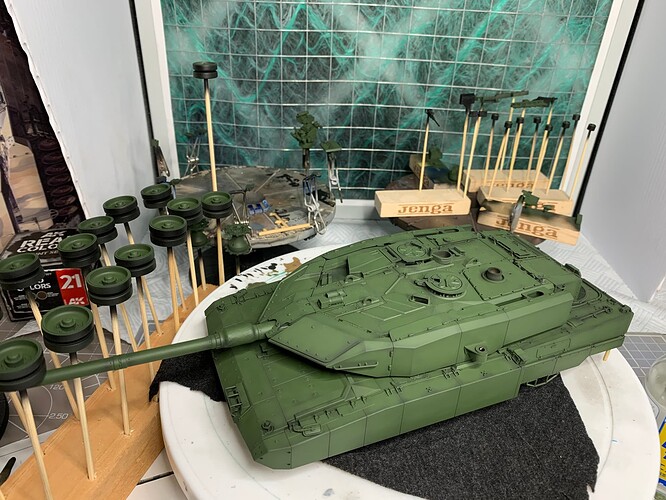 Looks good with the green on Jim, and it certainly commands the scene… A very big cat indeed. That overhead shot shows quite an interesting perspective; the turret is very nearly the same length of the hull… it shows how far MBTs have evolved size wise.
Keep up the great work Jim

Thanks John, the turret really does dominate this thing.

So I added some Tamiya Yellow Green to the AK NATO Green and lightened up the finish, final ratio was 2:1:1 NATO green:yellow green:x22 clear. As always the pics show a much lighter finish than it actually is, so I stuck the neutral background behind it for a slightly more accurate representation. I’m trying to go light enough that the subsequent weathering brings it to where I want it.

Going to experiment some more with whether to free hand the camo or use blu-tac sausages. Have broken out the fancier Iwata hp-ch so will see how we go. 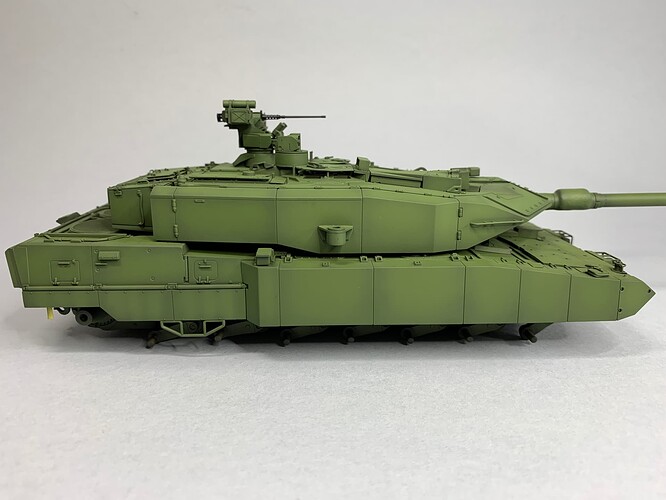 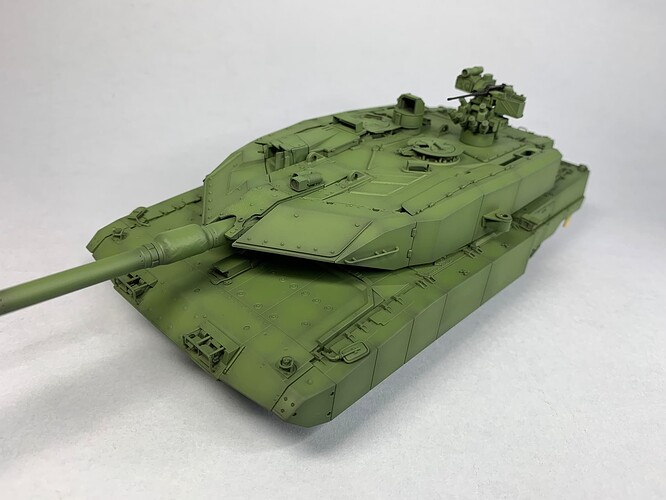 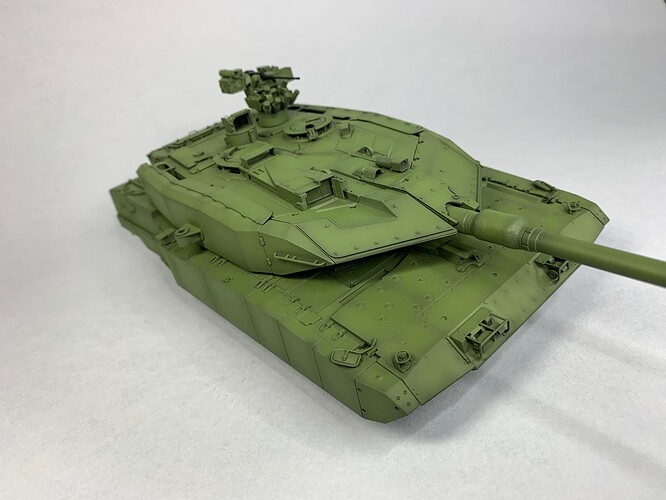 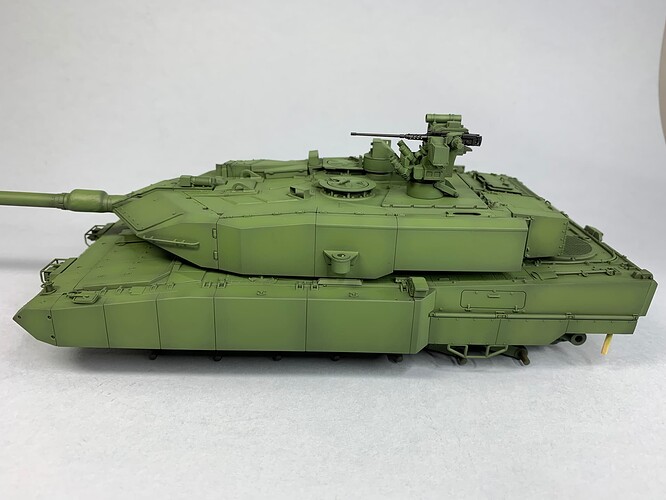 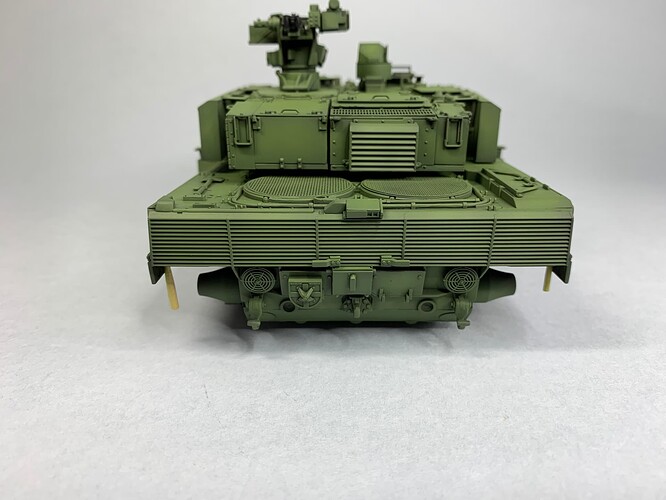 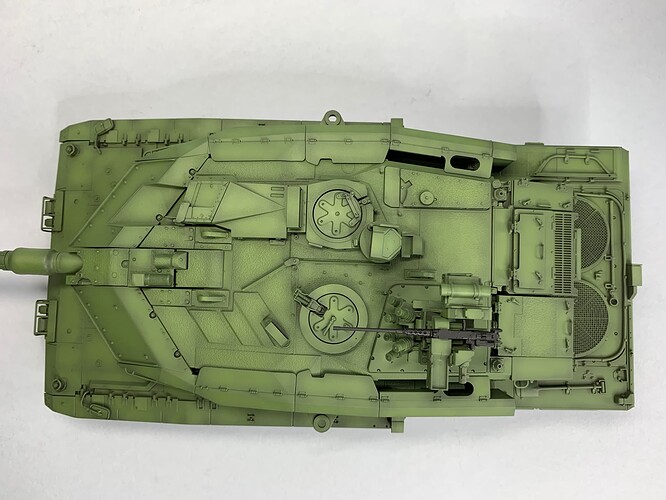