Recently completed Meng T10 OOB except for a metal barrel and muzzle break. Had wanted to build it since it came out in 2017 but I have a self imposed limit of $50 for a kit so I waited. Got this kit at MosquitoCon in April of this year. Guy was cleaning out his stash had it marked at $70. Asked how much he had to get for it and he said $50. I offered $45 and he said sold. Told me to check to make sure everything was there so I opened and there was a metal barrel and and muzzel break also. Sweet. One week later at AMPS Nationals I bought $20 of raffle tickets. No luck until the last day when I won the Trumpeter T10. Didn’t need 2 so I sold it for $40. Odd how things work out. Better to be lucky than good.

Anyway, The kit built up nicely with no major issues. As always with the more detailed kits the machine gun was a bit fiddly to get assembled but looks good when complete. Kit indy workable tracks and suspension. Comments and observations welcome. Thanks for looking. 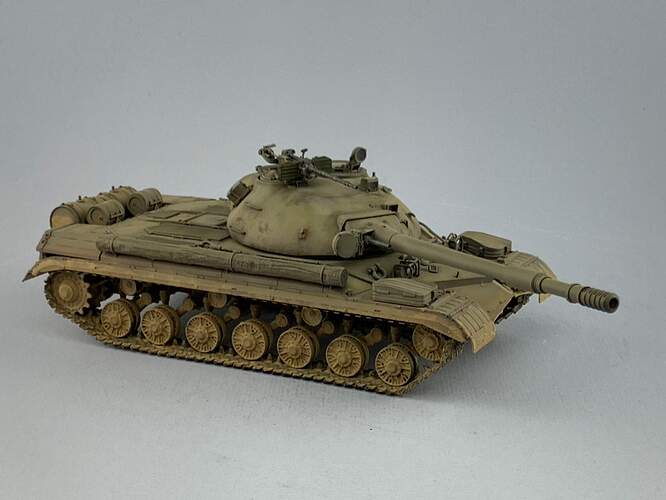 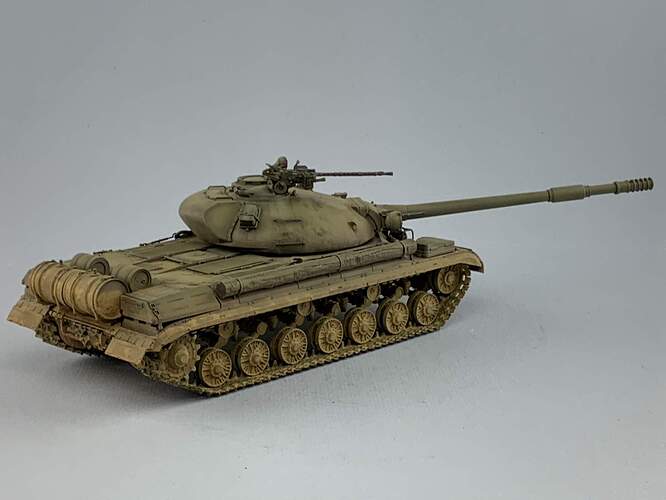 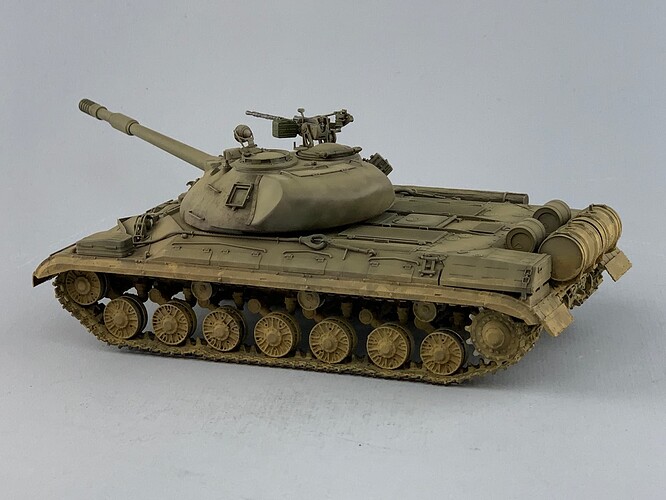 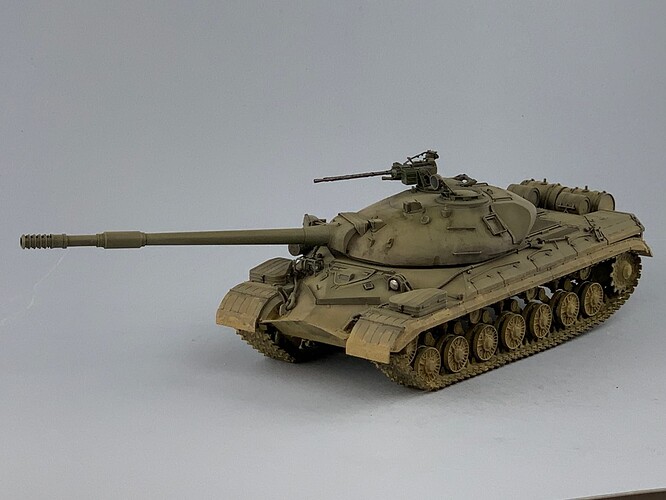 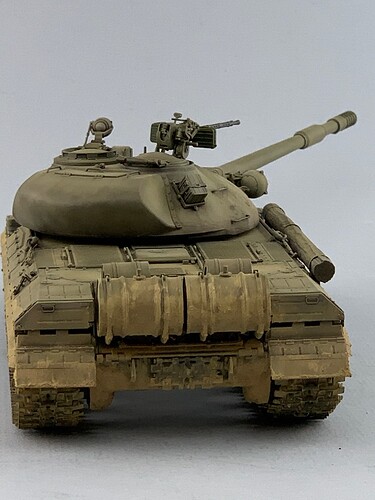 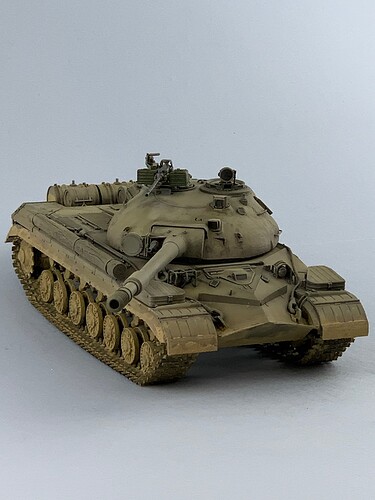 Very, very nice; a reminder that mine needs rescuing from the half-built shelf of doom. I especially like the last shot - not too difficult to imagine this though the sight of say, a Centurion, or an M48/M60 perhaps - with no small trepidation.

Just one thing, perhaps an antenna?

Low shelves remember. LOL you make that comment every time

Just too frustrating. I’ve tried removable ones but I either forget to put them in when I go to shows or forget to take them out when I put them away and they snap. I do agree however, that the addition would make it that more complete.

Sorry - couldn’t remember if it was you or not; bit of a broken record me(!) Anyway, still a cracking model.

not too difficult to imagine this though the sight of say, a Centurion, or an M48/M60 perhaps

During the mid - late 70’s in Germany, we were told if these started showing up against us, the Soviets were running out of armor. Now fast forward to what is appearing in the current Soviet war…T 62s…

Hi Carl, I have to note that when I got to my first posting in HQ 1 (BR) Corps in 1971, the T-10 was still in the GSFG order of battle; certainly it was being phased out but was considered still to be sufficiently lethal within the independent tank destroyer battalions of 3 Shock Army (that is the formation ranged against most of BAOR). T-62 had not then completely replaced the T-55 in GSFG as I understand it.

What we didn’t quite have was the rate of introduction of T-64 into GSFG - and I don’t think anyone else did either at that time. In fact, in the early 70s (and I know this is a different time-frame to the one you quote) any information on the T-64 was scant to say the least, despite the best efforts of the Allied military liaison missions in East Germany. Clearly the capabilities of T-64 would supplant those of the T-10.

Far from the inefficient lumbering “heavy tank” image that most commentators and historians would have us believe, I understand that this tank was considerably agile, and of course carried, at that time, the most powerful tank armament in the world. Also, one should not overlook that soldiers deal with what they are dealt (teaching you to suck eggs here, I’m sure!) and I suspect that the crews within GSFG would make this beast perform as best it could. It was a considerably capable weapons system, and a qualitative improvement over its forbear, the IS-III, the contemporary perception of which possibly tars the image of the T-10 somewhat.

During the mid - late 70’s in Germany, we were told if these started showing up against us, the Soviets were running out of armor.

One should remember that post-breakup documents show that the Soviet invasion plan was to start with - not escalate to, but start with - nuclear strikes on something like 400 western European targets. (I forget the exact number, but bear in mind that nuclear attacks on even 25 targets or cities would be catastrophic and crippling to NATO.) It is inconceivable that a full strategic retaliatory strike would not follow such a “preliminary” bombardment.

In other words, I doubt you would’ve lived to see any tanks coming at you, let alone T-10s.

Yes, I think we had been expected to last around 48 hours.

At the my time from the early 80s to the collapse of the USSR, the BAOR plan was to hold the line at various Regt, Brigade and Div battle lines, then execute a withdrawal in contact and delay for Reforger (US) and the UK equivalent to activate and arrive and then reinforce - We had about 5 to 7 days to play with. We were also briefed to expect battlefield NBC strikes across the spectrum, and practised those drills very frequently.