Since KitMaker is moving to a new platform, I wanted to link back to the archived site to still have these resources available. 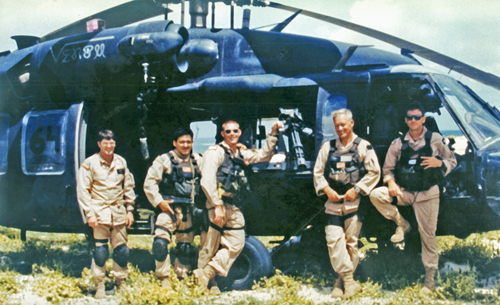 The question comes up often on the forum as to what types of Black Hawk helicopters were used by the 160th SOAR (Special Operations Aviation Regiment) in Operation Gothic Serpent, Somalia, Oct 3-4 , 1993. It was also called the Battle of Mogadishu or the Battle of the Black Sea and was made popular by the movie Black Hawk Down .

Doorgunner from the 160th who flew the mission on Oct 3-4 1993:
The Black Hawks were all MH-60s (a mix of A & L models), they were black with OD markings, no IFR probe, pilot doors were removed for missions, FLIR and Radar dome were fitted but not the angled missile detectors on the nose. No ESSS wings were used during missions, the AH-6Js were used for fire support. The internal fuel tanks were removed for missions due to small distances flown and to fit more passengers in the back. The aircraft’s call sign was painted on the window of the cargo door on both side ,e.g. Super 68 had “68” painted on the windows. As for the crews, they all wore desert sand colored flying suits with a pistol usually on the thigh and their survival vest (unsure what type) and SPH-4 helmets w/NVG mounts, personal weapons were MP-5 or M-16 usually. M-134 was the only weapons carried, no .50 cals and the miniguns were fed by 2 individual 20mm ammo boxes, one per gun, not the huge central one like in the Academy MH-60L kit.

I vividly remember that some MH-60s had the nose radar and some did not. All had the FLIR turret mounts but didn’t have FLIR installed for every mission. There were no plume detectors that I saw but each one had nose and tail mounted APR-39 radar detectors.

Pat Powers crew chief Super 65:
“The aircraft always flew with the cockpit doors off. The fairings around the main landing gear strut weren’t installed on any of the Blackhawks in D Company and cargo hooks weren’t installed on the aircraft. There was a tube, about 3 inches in diameter installed in its place. The tube had 4 rings (in a clover leaf pattern) attached to it in the center. The system was installed in place of the cargo hook for securing the aircraft during fixed wing transport of the helicopter…”

OPGS aircraft from a 160 SOAR crewman:
I am sure I am going to leave a couple out. These were from my platoon. Some were the MH-60A others were MH-60L. Most were DAP capable.

Durant’s Blackhawk was Super Six-Four. It had 64 painted on the front cabin door windows. As for the helicopter’s nickname, Durant never referred to it in his book other than Six-Four. Looking at the photo of his crew posing with the helicopter, on the right engine nacelle (looking forward from the pilots’ positions, there is a word written in what looks like Arabic under a square root symbol. It is hard to make out, but in another picture, this time of 64’s crew chief Tommy Fields, you can make out the bottom half of the left engine nacelle. “VENOM” is on the nacelles, with the V forming the left leg with a line extending across the whole word so it looks like a square root sign.

Also from Durant’s book:
“Tommy, in his late twenties, had a race car back in his garage in Lisbon, Maine, and he treated ‘his helicopter’ no differently from that hot rod. The wheels were always slick with Armor All, the windshield washed after every mission. There wasn’t a drop of oil on that thing.” So you don’t have to dirty the model up too much to accurately represent the real thing.

Pilot of Super 65 CWO Gerry Izzo. It has some great info on Super 62, ‘Black Widow’.

“Super 62 was the Black Hawk that put in the two Delta snipers, Sergeant First Class Randy Shughart and Master Sergeant Gary Gordon. They were inserted at crash site #2 (Super 64). Shortly after Gary and Randy were put in Super 62 was struck in the fuselage by an antitank rocket. The whole right side of the aircraft was opened up and the sniper manning the right door gun had his leg blown off. The aircraft was able to make it out of the battle area to the port area where they made a controlled crash landing. (This is not depicted in the movie.)”

You can read CWO Izzo’s full account of the battle here.

Glad you brought this one Gino, I was looking in on this on the other site. Some amazing research, and the film is a fav of mine. I’ve heard people mention inaccuracies in it, but you only have to watch it to get the feel for it and some of the selfless acts the men did and sacrifices they made.

Hey, I was the original crew chief of both Heavy Metal’s 908 and 887, they transferred 908 to C Company, from D Company, in exchange for 887. 50 writeups later i had a decent aircraft. I said they couldn’t take my Aircraft name. I transferred the cowlings. As you see 908 never got renamed.

Welcome aboard Sid. It’s great to have an OGS alum check in.