I recently came across this photo of a Mine Protected Land Rover Series 3, evidently serving in Aden during the 1960s. Can anyone explain the significance of the large white cross marking? 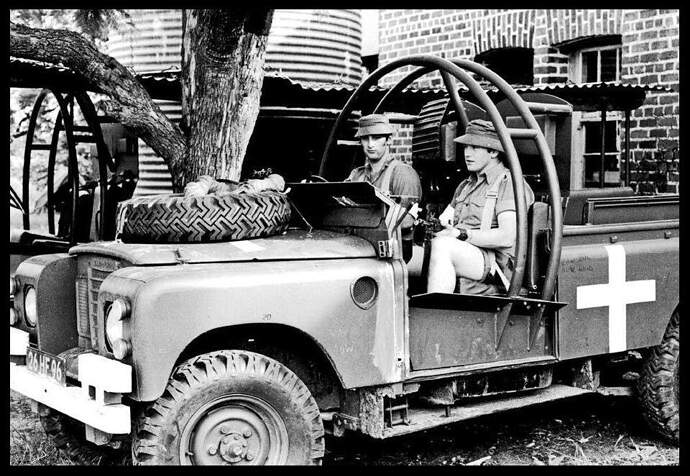 This is not Aden, but a vehicle as part of the Commonwealth monitoring force in Rhodesia - deployed 79/80 involving Brits, Australians, New Zealanders, Kenyans and I think Fijians. The white cross was displayed to indicate complete impartiality to the warring factions and the Rhodesians - all leading up to the 1980 elections, which basically saw the destruction of Rhodesia and the emergence of Zimbabwe - or rather, that’s my take on things(!)

The op was known as Op AGILA.

I was deployed to Zimbabwe shortly afterwards for a 6 month tour - a somewhat interesting time.

For someone with 0 knowledge on the subject, would you mind to summarise what happened there? I know I can go to wikipedia and read, however I am much more interested in the view of someone who was there at the time. Thanks!

Not really Carlos, I wasn’t part of the Monitoring Force however, you may recall there’d been a deadly bush war type insurrection against white rule in Rhodesia for some years; sanctions were imposed by a lot of countries (against the white Rhodesian government) including those imposed by Britain, Perfidious Albion living well up to its name. A cease fire was eventually brokered - there being 3 main protagonists, ZIPRA, ZANLA, both African factions against the Rhodesians. I think, as per usual for Africa, the division between ZIPRA and ZANLA was tribal, ie Shona and Ndebele but there is far more political impact than that gross oversimplification.

It was agreed that elections would be held in 1980 - in fact - I think it may well have been a Conservative government who managed to field all that - I can’t remember - and I too can’t be bothered to look it up; I am sure there are some far more objective and informative sites dealing with this on the www somewhere. All factions were meant to be disarmed and held in cantonment areas pending the elections - apart from the Rhodesian military: many units, sensing which way the wind was blowing, “gapped” it, as it was known, in their entirety to South Africa. What has been described as the finest light infantry force in the world was therefore effectively disbanded.

Mugabe, and I really can’t remember which faction he was from, won the election and thus Zimbabwe was born. And surprise, surprise, it all turned to rat sh*t shortly after – but that is a far from objective view, save I was there in the early days and it was pretty clear how it was going to end, even back in 1981.

Part of the deal in running the elections was that the Brits would supply a training team to nurture the new Zimbabwean Army, which now would be composed mainly of Africans (some whites would in fact, stay on); in fact, despite my jaundiced view on all this, the British Army does/used to have a good record in providing “BMATTs” – British Military and Advisory Training Teams all over the world, so it was a sot of logical deal really. Two BMATTS were formed, strangely enough numbered 1 and 2; BMATT 1 was the combat arms training piece, and BMATT 2 was the establishment of a junior (officer) Staff Course for the emerging new leaders of the Army. It was the latter I volunteered for when a trawling signal came around the BAOR HQ I was working in at the time. As a young (26-year-old) newly promoted Sergeant, I was struggling a bit within the constraints of a large, soul-less administrative Staff branch (even though the subject matter – Intelligence – was interesting); I’d also been in the same garrison for nearly 5 years or so and was getting a bit jaded. My application was accepted and in February 1981, I arrived at the King George VI barracks just outside what had been Salisbury, the capital, and was now Harare, with 6 officers, to begin what became a 7-month tour.

I won’t bore you with the rest as I’m more than aware that you only requested a take on the background. However, needless to say, assimilating the differing warring factions, in other words terrorists, into the new Army, was a challenge; as was accepting that one could be spat upon by white Rhodesians, but that’s another story!

Afternote: having re-read all this, I do realise it’s far from accurate and not in the least objective, but really reflects what I knew at the time – which clearly wasn’t much(!) Forgive me if my sweeping statements ruffle any feathers, but that was how I saw it all back then.

Thanks Brian, much appreciated. No matter it is not completely objective, because I was looking exactly for that, your personal view. In fact, if you want to continue with your experience I would be glad to hear, either here or in a private message.
@Johnnych01 same for you, if you want to share your time there. 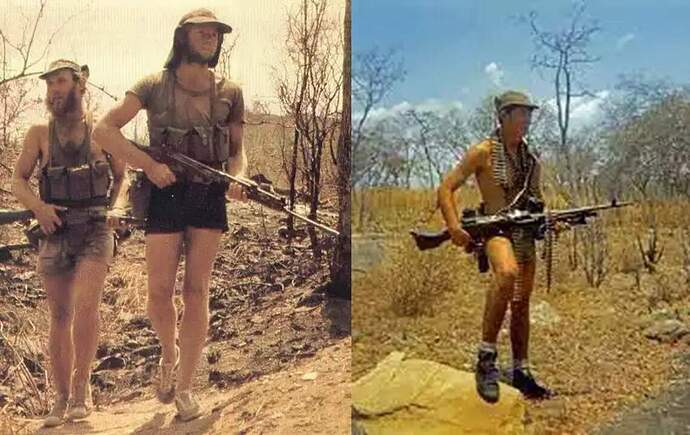 I have an Osprey book on the Rhodesian infantry somewhere in my library and it’s excellent for a short history. They operated under severe constraints due to economic sanctions against them. Amazing troops.

I wouldn’t tell the selous scouts that though lol

Will P.M you with my timeline so as not to bore everyone… Not massively exciting from a military point of view, but a good insight into how a country can be utterly destroyed by one person.

Well Carlos, nice to find a ready ear as it were; I’ll certainly produce something, but it will not be that interesting a read I assure you; the life of a military Clerk doesn’t normally get a mention within the Pantheon of military endeavour!

Thanks to you all for your most enlightening comments.
I was drawn to the subject of the Mine Protected Land
Rover, having come across a few online images of the
vehicle. Your background information really helps with
my future project, a 1/76-scale conversion (most likely
to be based on one of the Oxford Diecast Land Rover
Series 3 models).

Thank you for sharing that knowledge. Rhat is the type of info that gets lost to time if not preserved in some format

Plans here if any help

Returning to the original post, the Rhodesians who had become experts at mine protecting vehicles stated that the British design developed for Aden and Cyrpus was a potential death trap unsuitable for protection against AT mines commonly used in Rhodesia. The British provided around 80 vehicles for the Commonwealth monitoring force. The Rhodesian had several mine protection designs suitable for long wheelbase Land Rovers although many looked considerably different from the parent Land Rover design featuring monoque bodies.

Paul, during my tour there I set to in photographing every different type of vehicle I could find; in addition to utilising the Land Rover chassis they also used Unimogs. Other mods were to whatever basic troop carrying trucks - such as 4 tonners - they could find. (I’m sure you know all this). They were also in a variety of colour schemes. I think the most exotic was the Pookie:

which really did look weird (filched from the www).

The sad and even galling thing is I cannot find those photos - so an epic fail! I know I haven’t deliberatly binned them and can only assume that they perished during the many moves that go with Army life.

BSM do conversion for this if anyone is interested. They are part of Minor.

Wow - sorely tempted - that would just look soooo different on the display tabels!