In box reviews have their uses. Like seeing if I can be bothered with the tracks, or confirming basic assumptions. What seems to be utterly pointless, however, are figure kit unboxings. Wow. a bunch of bits on a sprue. totally wasn’t expecting that. there’s no way I’d buy a figure kit unless I’d seen actual example of built up models.

This in mind, I thought I’d do the right thing and review what is probably one of the most important figure releases of recent times, the Sheep kit, from Mini art.

The kit comes in a box. With pictures of sheep. Which would seem appropriate. Pictures of cows, for example, would indicate a somewhat baffling misunderstanding of barnyard fauna. 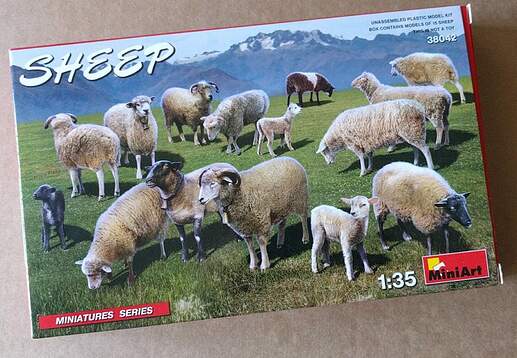 Opening the box allows access to a small bag of grey sprues. I think this packaging was designed buy the chaps at Revell. You could probably fit four of these bags within it’s capacious confines. Three at least. There are two different sprues of plastic, duplicated three times, for a total of fifteen wee wooly ovines. 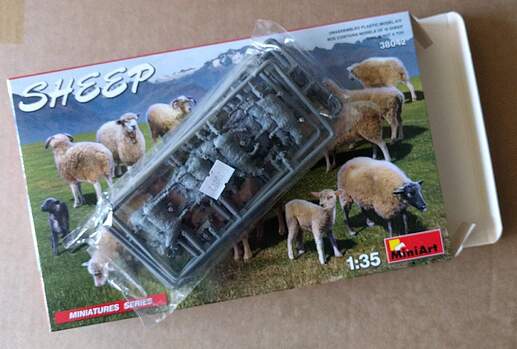 Accuracy looks good, though I no longer live on a farm, so I’m going of memory here. Detail is good. 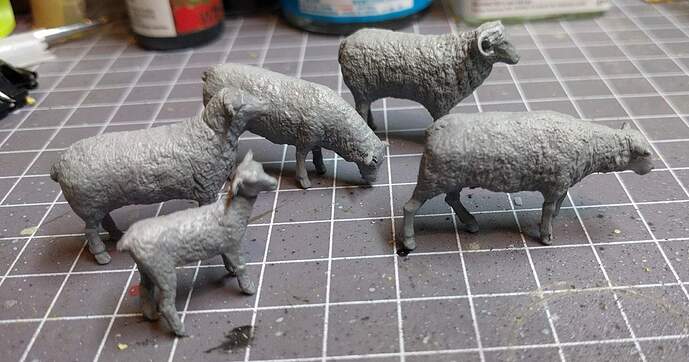 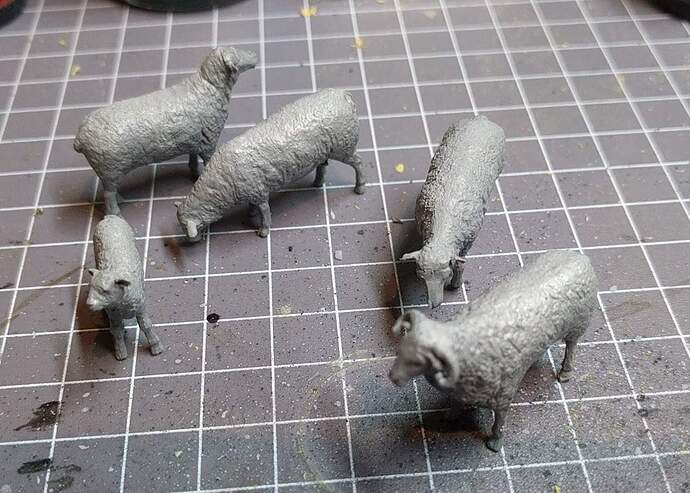 The ears/horns are separate parts, and there will be seam line down the middle of their backs which will need attention. I stippled on some Mr Surfacer 500 to restore the texture.

The plastic is typically Mini Art soft. I managed to lop one of Flossie’s ears of while cleaning up a seam.
There are no spare ears.

It should be noted the the ram comes pre-wethered.

One minor disappointment though. The box-art shows cute bell festooned about the necks of at least two of the models, but they are not included. This would make modelling a Mid-War sheep difficult, but I guess you’d also have to apply Zimmerit for that. I’ll be painting mine up late war, with Regulation Schafsgrau 44 overall. 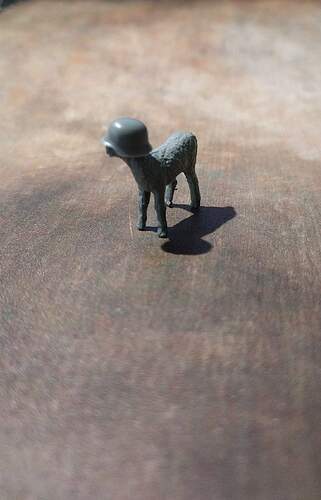 I look forward to the inevitable Full interior kit. With schurzen.

Thanks for the rev-ewe Craig, brace for all the other sheepish gags that came when this set was first announced

The ears/horns are separate parts, and there will be seam line down the middle of their backs which will need attention.

Depend. Not all sheep have the same quality. It varies from farm to farm.
Without the bells, they can be easily integrated into a Christ the good shepherd diorama.

Does the set come with tongues? 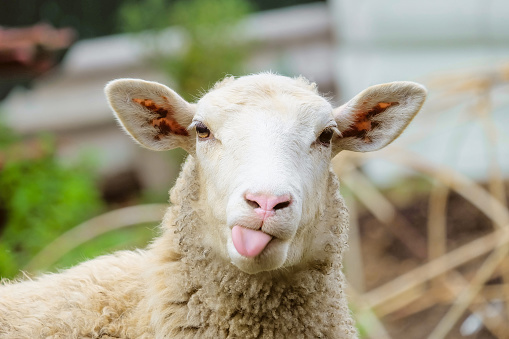 Good opportunity for some PE upgrades.

Craig this forum won’t let me use the language which beat expresses my feelings on this review.

Im giggling so much my wife is currently looking at me like I’ve got three heads and my dog up and left the room.

I strongly encourage you to do more of these in the future.

It should be noted the the ram comes pre-wethered.

Ye Gods but that’s Baaa-d. Conversion potential for zombie yows and those mutant carnivores that are a staple of New Zealand cinema. Expect after-market figures of a Welly-boot-wearing kilted Scotsman and a Welshman with a club in one hand and a lipstick in the other.

Which color do they recommend for the wool beige color?. Maybe Tamiya XF-55 with some white?
I still wait for the sheperd with it´s dog, of course a German Schäferhund. And weren´t there some Volksturm flocks, trained to block narrow roads, to hinder the Allied advance?

The lack of camouflage options (winter camo only) is rather disappointing.

Yeah. not even a decal sheet.

Great review, almost makes me run to the shop to get this kit… almost… only thing stopping me is the missing bells, I’'m sure you’ll have to get one of those PE sets for that and I am no fan of PE…

I strongly encourage you to do more of these in the future.

My pleasure. Any suggestions? 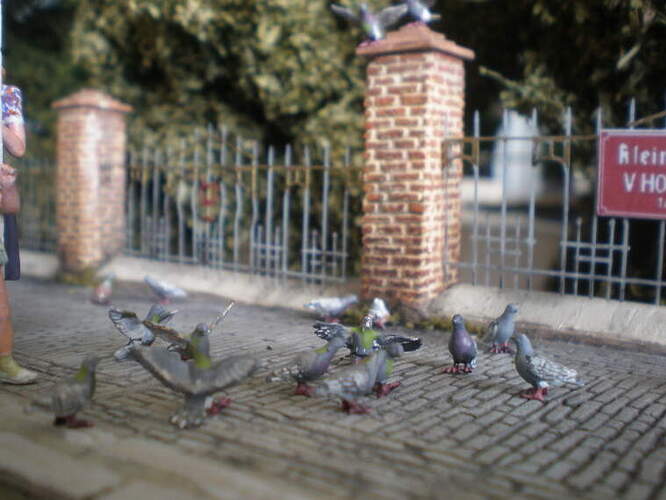 Some music to use as background while reviewing the pigeons: 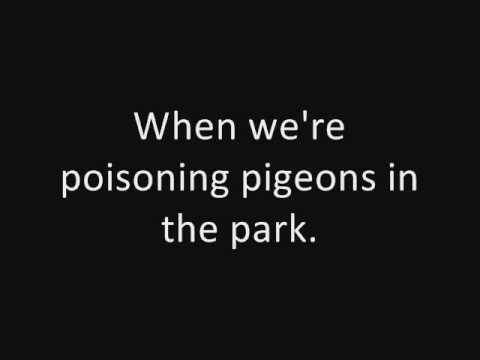 Opening the box allows access to a small bag of grey sprues. I think this packaging was designed buy the chaps at Revell. You could probably fit four of these bags within it’s capacious confines. Three at least.

Seems they bought a large stock pile of that size box, as all there similar kits have the same size box. At least the plastic stays to scale vs fixed to the box size that was done long ago.

That said, have you measured the sheep to ensure they scaled properly. You don’t want 1/32 or 1/40 scale sheep in your diorama.

Which color do they recommend for the wool beige color?. Maybe Tamiya XF-55 with some white?

XF-78 with white might work as well, another option Vallejo Bone White. https://acrylicosvallejo.com/en/product/hobby/game-color-en/bone-white-72034/

I plan to use that color for future figure wearing a wool sweater.

And weren´t there some Volksturm flocks, trained to block narrow roads, to hinder the Allied advance?

Apparently one William Jefferson Clinton first proposed to a Hillary Diane Rodham on the shores of Ennerdale Water; imagine the pain the world might have been spared by a stampeding flock of Herdwicks… It has to be a diorama possibility for the “What If… VIII” Campaign.
I look forward to a follow-up release of Goats, hopefully we will be able to differentiate between the two sets. 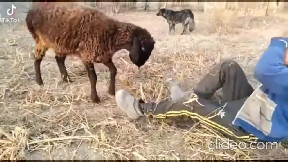 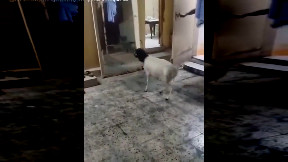 How about this variety of barnyard fauna? How were the decals? And was the PE accurately sized?