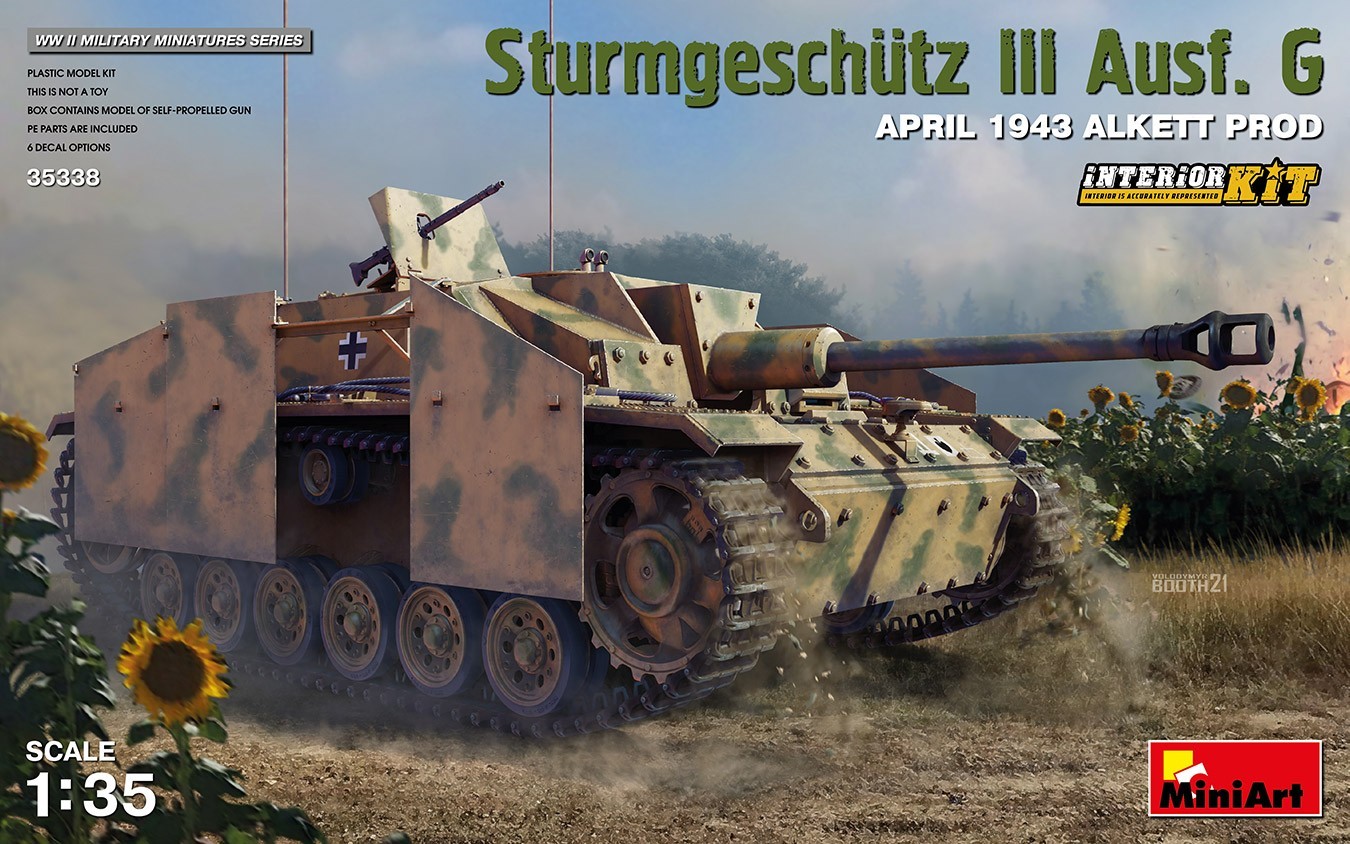 This is partial text from the full article (usually with photos) at https://armorama.com/news/miniart-sturmgeschutz-iii-ausf--g-april-1943-alkett-prod--interior-kit
BringupthePIAT February 2, 2022, 10:01am #2

Lot of StuGs coming lately - feels like Miniarts are doing one for every month of 1943 and 1944.

I’m in the middle of a Miniarts Werkraftwagen bus/mobile machinery shop and its not motivating me much to look at buying their tanks. Squillions of parts, real light on guide points, vague instructions, plastic that manages to be super fragile and brittle, sprue gates not in sensible places, fit that is all over the place and dependent on you guessing right a lot of the time, build process that to be fair to them does rattle along quite quickly - once you find the pieces you need. Tiny sprue markers, no individual bagging. Parts for parts sake, each tyre is eight sections that need putty to look right and take hours to do. Certainly the most difficult model I’ve ever built and I’ve several 1000+ piece Trumpeters and the RFM M1150 so I’m hardly a newbie.

I am very aware that other better and more experienced modellers love their work but I find it excruciating at times. I think it is probably more me than the kit!

Are their tanks any better/easier? I love StuGs but struggle to see myself going for a Miniarts over the Takom, Border or Tamiya etc.

Anyone have any feedback?

I have the new Blitz by Takom #8006 StuH42/StuG III G Late 2 in 1 kit. It’s a beauty and I can’t say enough good things about it. Well engineered, not too many parts, excellent fit, accurate to references, clear instructions, just enough PE (mesh screens) and choice of metal barrels. Great price, too. It’s a pleasure to build.

I have the Takom Blitz StuGs too - they look amazing and are extremely impressive when you open the box. Superb. Was cheaper than the Miniart ones too.

As i say, struggling (or should i say “StuGgling” ahahaha) to see why I would use Miniart vs the others for future StuGs.

While I do think on the whole that MiniArt kits are pretty good, I tend to avoid them if I can get the same elsewhere. For example, I would build an ICM truck or car in preference to MiniArt and I have the RFM Stug with interior, so won’t tackle MiniArt’s version. They use too much PE where it isn’t strictly necessary with no styrene option and an insane number of parts IMHO.

Their Dingo series was quite good imo. I have their Grant, and that didn’t seem awful (especially if you’re okay with full interiors.) I’m not surprised that they’re doing another StuG, it seems like an easy way for them to sell more kits with minimal work by making all the trims.

Okay so it has an interior, but how many people actually fit interiors when they can barely be seen? That is just extra $'s in the spares box for many…

Venture out into the world of ‘no-one has released one of these in styrene’ Miniart and you will get my thumbs up. There are plenty of ‘Wish list’ threads on modelling sites to give you viable leads…

Their Dingo series was quite good imo

My opinion too, and it was a kit that only had the ancient Tamiya one to compete against. Only issue was the crap decals. I thoroughly enjoyed that one.

AEC Mk 3 was also also a vehicle they did that was not available in styrene elsewhere. I won’t lie and say it was a great kit, it wasn’t - warped parts, unnecessary etch parts, crap decals, etc - but it was buildable and turned out reasonable in the end.