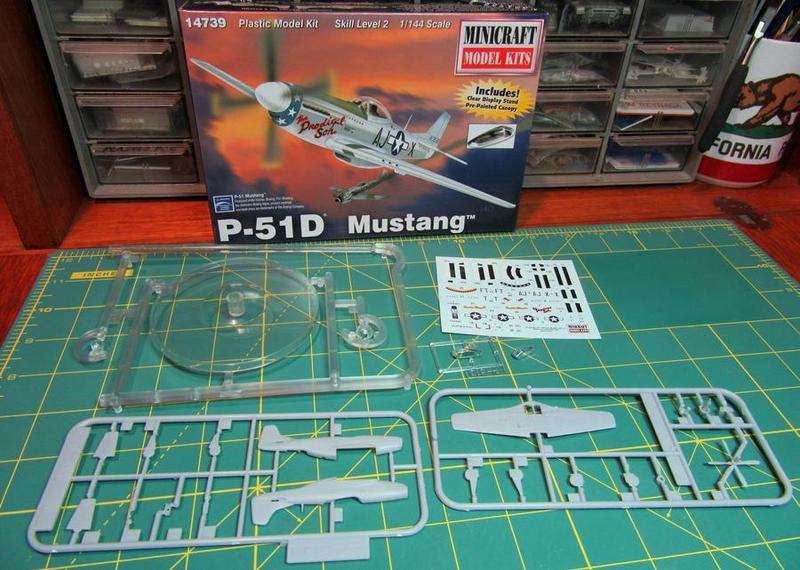 This one is the diminutive 1/144 scale bird from Minicraft. This 2018 release is actually a reissue of the 1974 Crown kit, which has been sold variously over the years by Revell, Academy, Trumpeter, Mini Hobby Models, and now Minicraft Models. This little beauty has certainly been around! Minicraft has added some value, though, with a new clear display stand, a pre-painted canopy, and some excellent Cartograf decals. 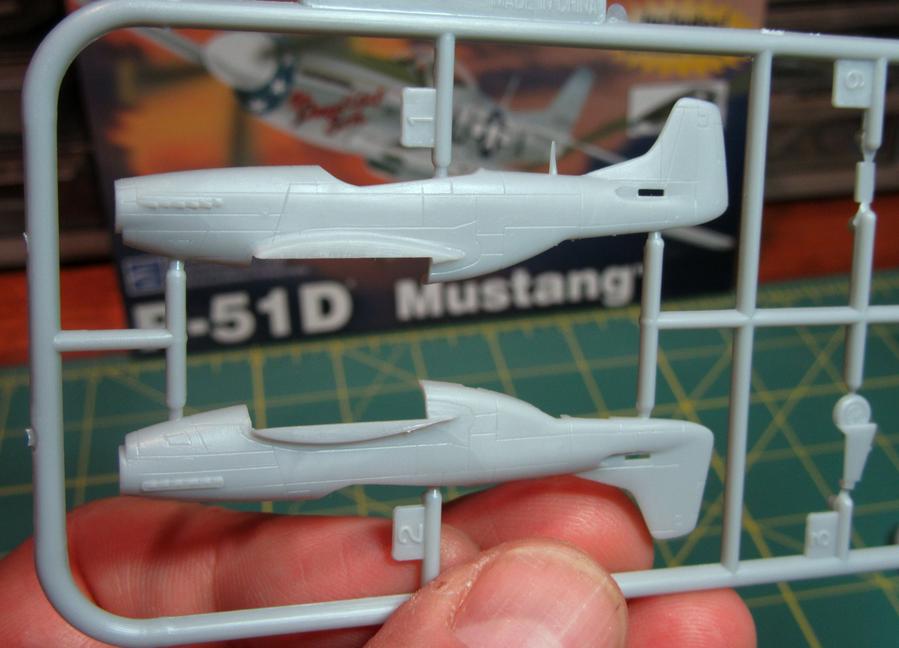 The small size, low parts count, and pre-painted canopy should make this a fast build.

The little Mustang’s outline is accurate and the model goes together with a minimum of fuss, but small size means a number of simplifications. One of these is the cockpit, which is just a flat recessed area completely devoid of detail. To address this, Minicraft took the unusual approach of including a decal to represent the interior. 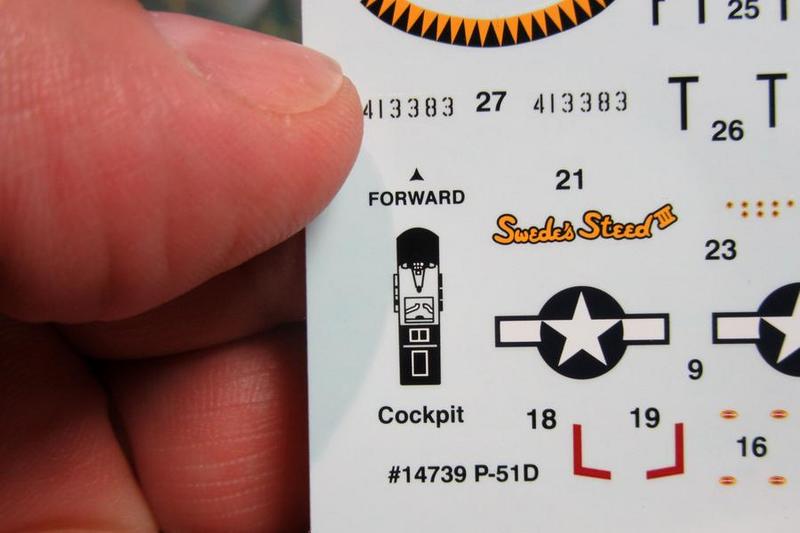 Placed over a green & black painted cockpit tub, the decal is surprisingly effective – especially under the thick canopy. 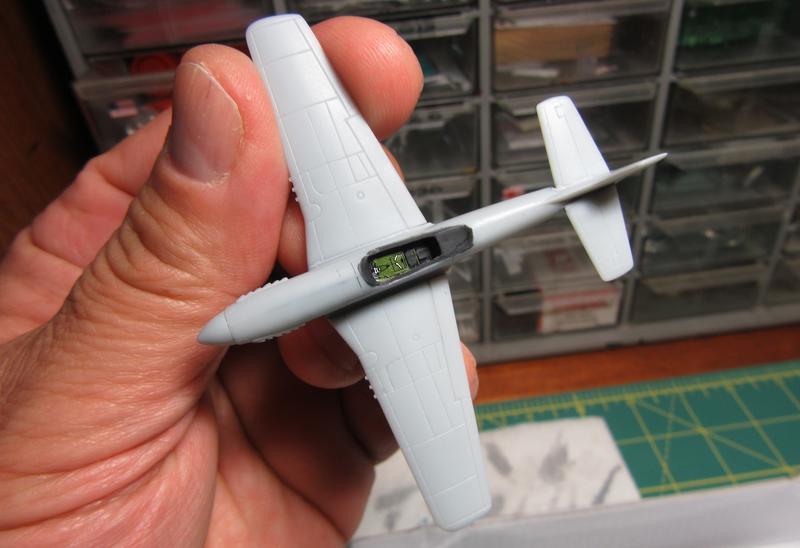 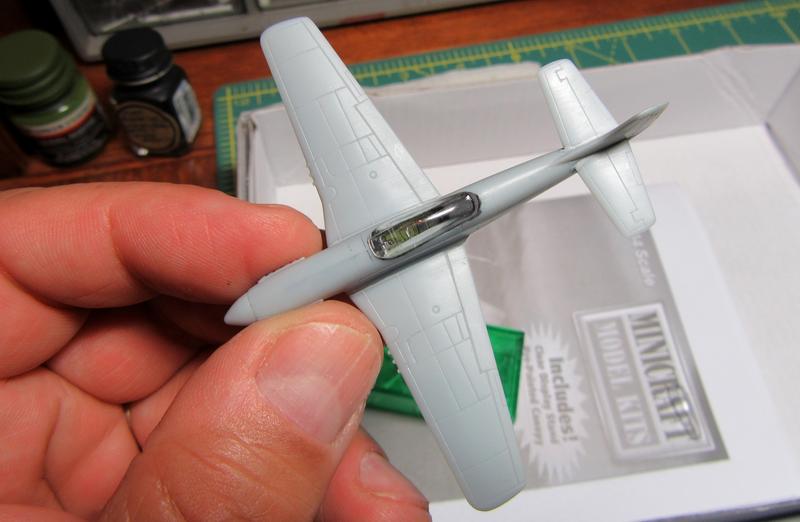 The old girl’s panel lines are surprisingly sharp for a kit of the 1970s. She’s not perfect, though. 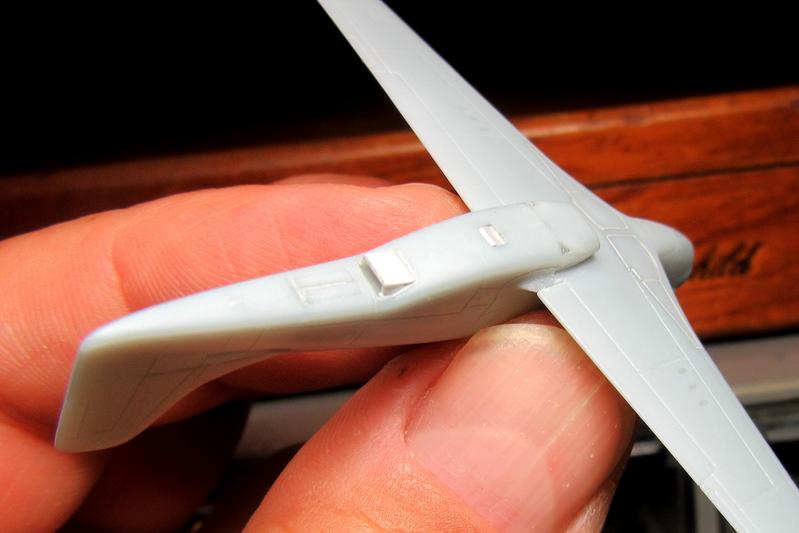 The intercooler and rectangular coolant matrix were just square depressions in the lower fuselage halves; I made simple sheet plastic improvements. 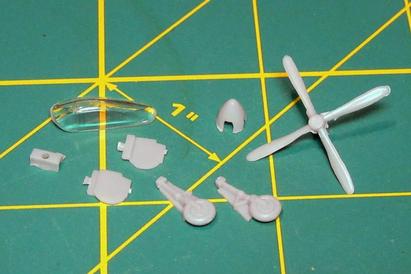 The assembled Mustang now has its coat of Tamiya rattle-can AS-12 Bare Metal Silver. 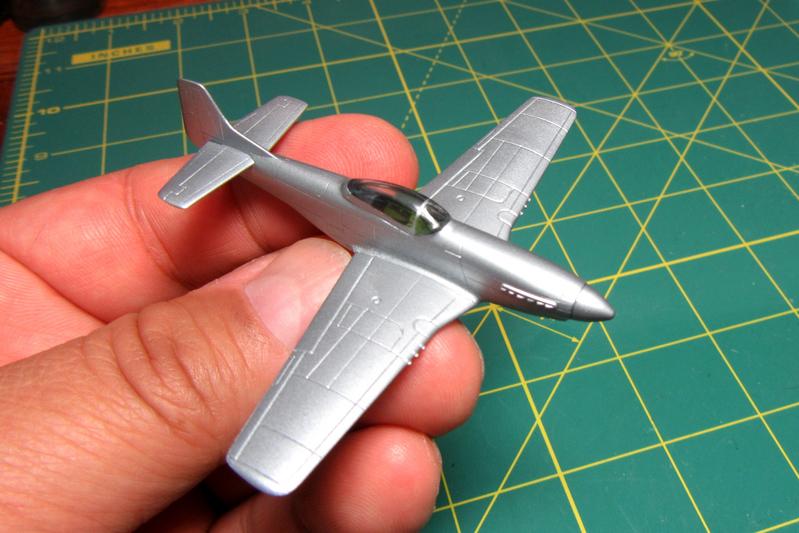 A really cool feature of this 2018 Minicraft release is an optional pre-painted canopy. Unfortunately, I rubbed off some of the paint while blending the windscreen with the fuselage, so I still ended up masking and painting it along with the rest of the aircraft.

The kit came with decals for two different USAAF Mustangs, but I opted instead to use aftermarket markings from Draw Decal. 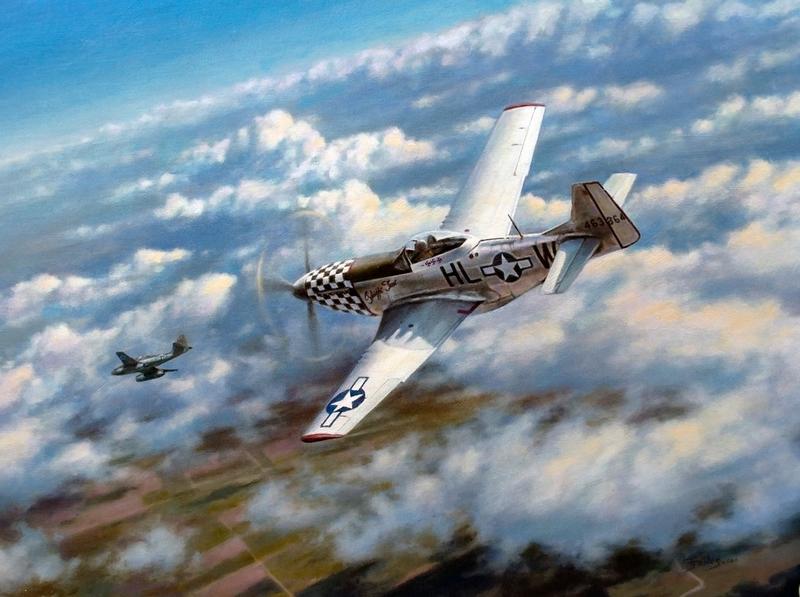 The model will depict “Twilight Tear,” an aircraft of the 8th Air Force’s 78th Fighter Group, 83rd Fighter Squadron flown by 1st Lieutenant Hubert Davis out of Duxford, England, in 1945. 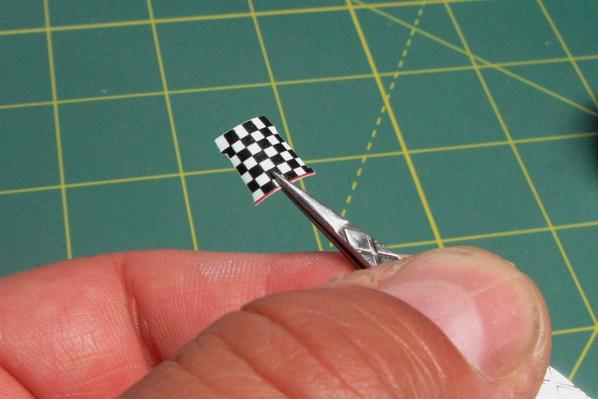 The Draw Decal markings look great – can’t wait to try them out!

After the initial silver, I applied Tamiya rattle-can AS-6 Olive Drab USAAF for the anti-glare panel followed by red wingtips and a white spinner. 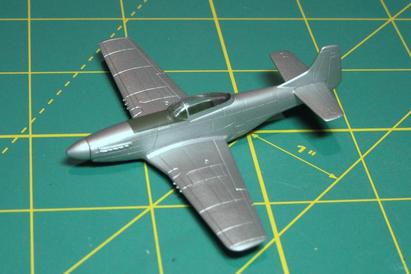 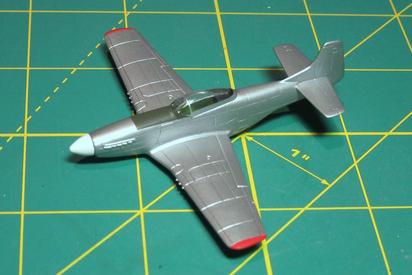 With the application of the decals, a radio mast, and the finished spinner, P-51D Mustang “Twilight Tear” (named after the 1944 Racehorse of the Year) is complete! 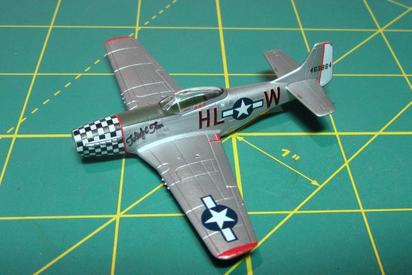 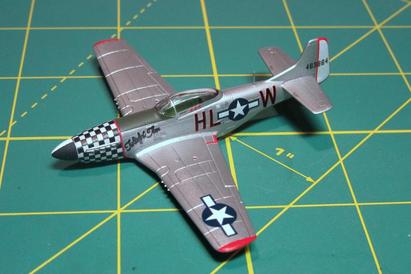 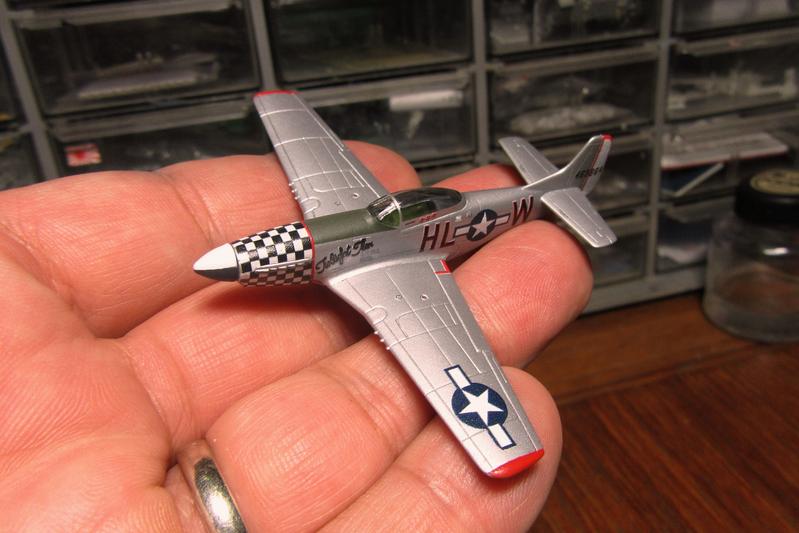 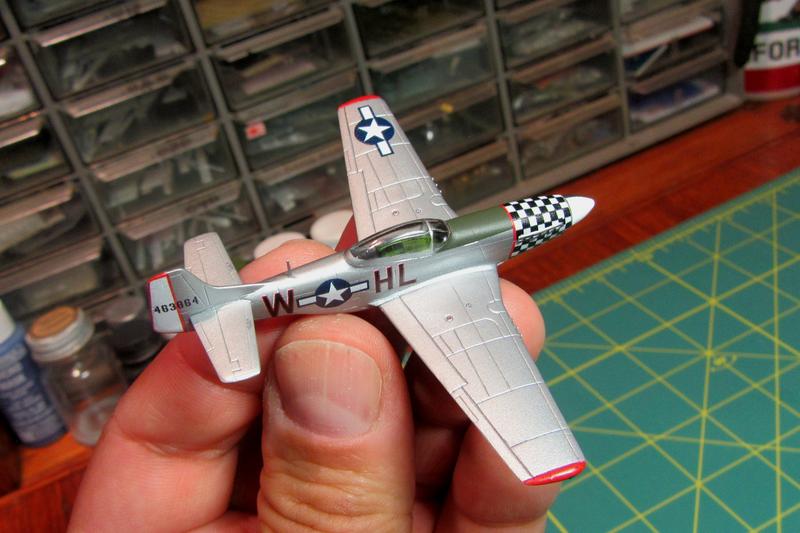 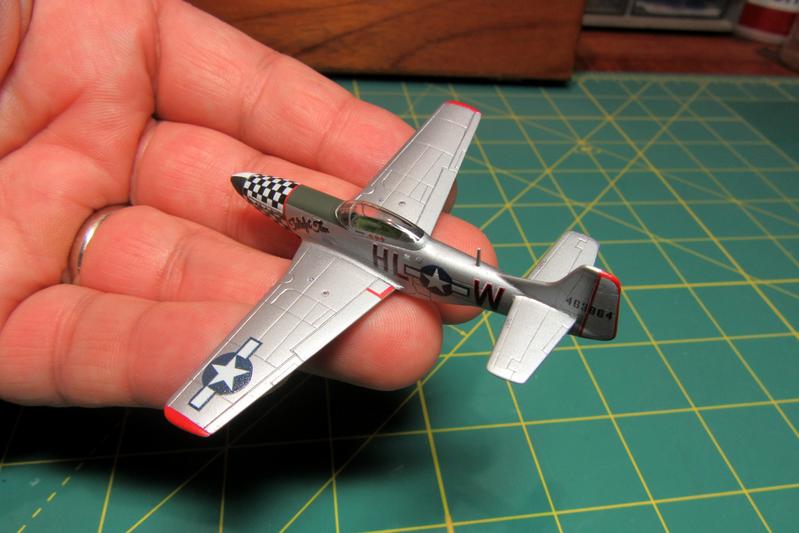 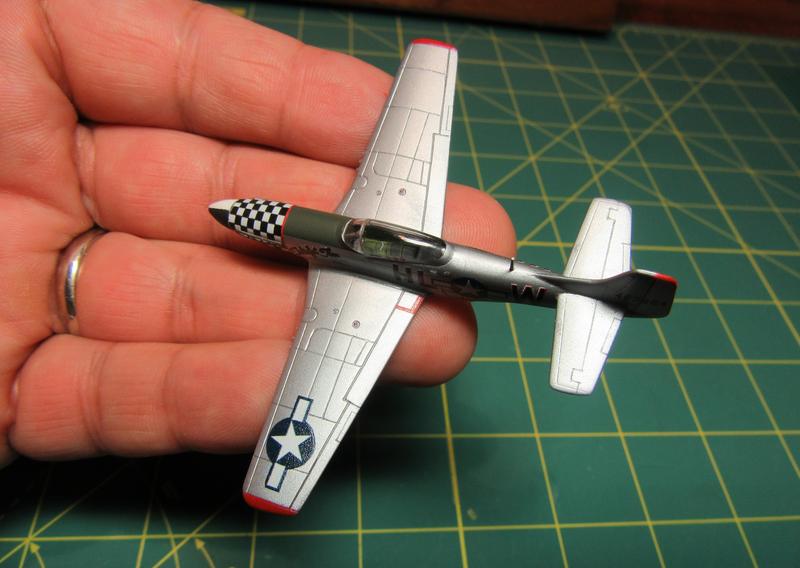 Was that easy or what?

It certainly was! It looks like this forum platform will work just fine.

Looks great Tim, having the images together with the text is a real advantage!

I have to admit I’ve always turned my nose up at 144 scale beleiveing they weren’t serious models but after seeing this little jewel blossom from sprue to view I may have to reconsider. I’m realizeing now this could be a very satisfying scale, a quick build and you’re on to the finish without investing all that stress to get every cockpit detail just right, sweet. The canopy appears vacuformed which would be more appropriate but unless I’m mistaken it’s injection if I see the photo right. Little matter it looks great either way. Seeing this might be the incentive I need to get back to that 1/72 M60 I started years back but never finished. Glad I stumbled onto your post. You never know how you might impact someone, keep up the good work.

Thanks Terry! You are right, many 1/144 kits are so toy-like that we often dismiss them, but they can still be great for quick, fun builds. Other than the decals, this one was out of the box and finished with simple rattle-can paints. 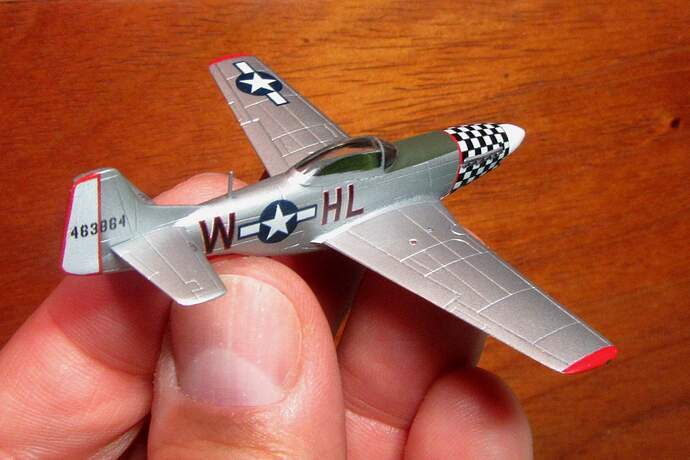 The canopy is the injection molded part from the kit, polished with an old t-shirt.

Do they not come with props though ? The scale looks big enough to accommodate them ? That doesn’t detract from the fact you’ve done a great job Tim

Thanks John! Yes, the kit did come with an optional prop and landing gear, and even a spare canopy. 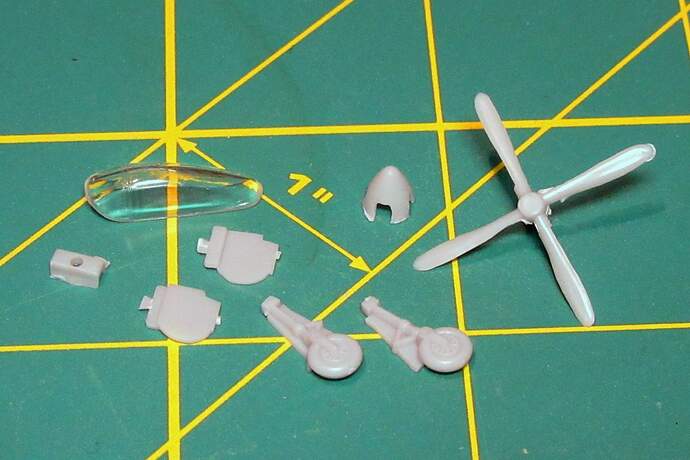 I chose the in-flight configuration, so now I have some spares for the parts box!

Ahhhh now I see… That makes perfect sense… And a rather good idea !

Wow, really neat, Glad you explained the cockpit thing. Thought it wa a really weird totem for the nose art. I’ve built a couple of 1/144 kts and that’s by far the best cockpit strategy I’ve seen yet. Propless spinner is a great solution for a gear up stand mounted bird.

Nice work for such a tiny scale. I too, have always been skeptical of 1/144 but seeing what you have done makes me want to give it a try.