Have got a coat of primer grey down on all the major assemblies.
Wheels are on the suspension run and that’s on both sides.
Engine compartment is in with the fans and fuel tanks. Have done that in hull red. 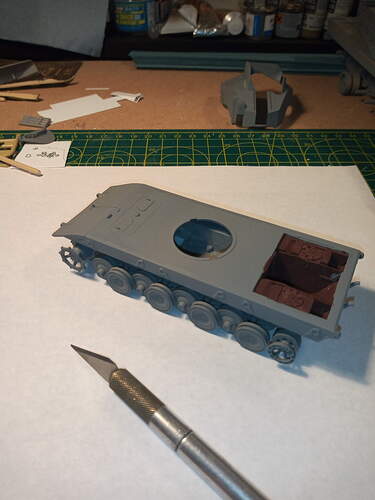 Engine is ready for paint and the 2 black bits in shot are small diameter electrical cable to act as coolant pipes once engine is fitted. 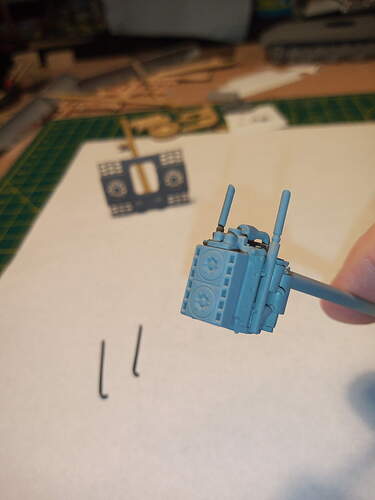 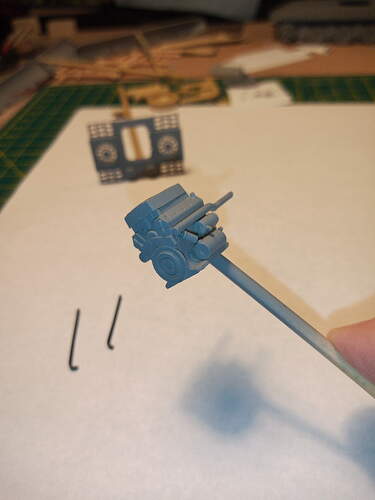 Upper turret with the added side walls around the roof opening for the gun when it’s in elevation, some wire rungs drilled into the side and roof. And some thin plastic strips for some extra detailing. 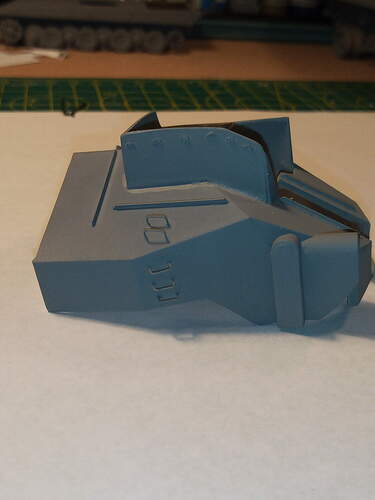 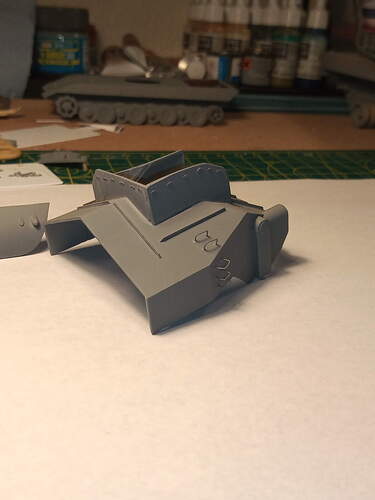 I decided to go a bit mad with the gun.
As it’s going to be in theory semi automatic, I thought about trying to make a large ammunition ready box to feed in ammo… 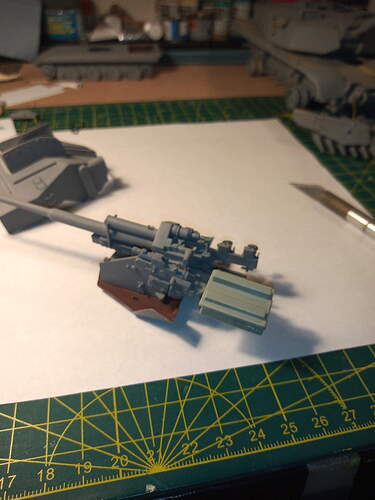 The ammo box is actually an old radiator from the spares box. With a supposed feed door added on the side. 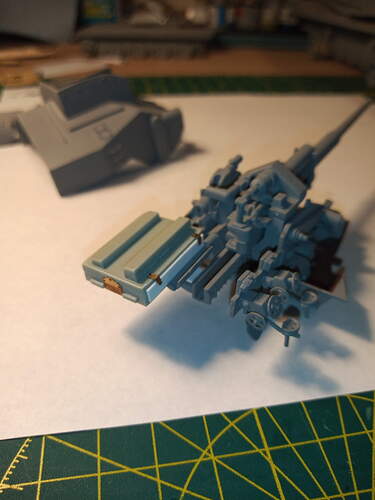 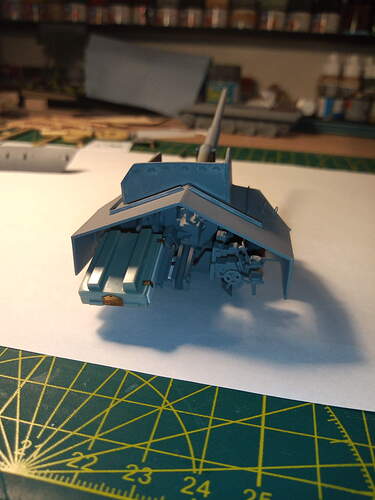 I quite like the ammo feed box, doesn’t look or sound to crazy does it ?
Just need to figure out the best colours to paint the gun assembly now. Barrel will be finished in dark grey.

And some final shots of the turret dry fitted and on the hull and the gun in elevation. 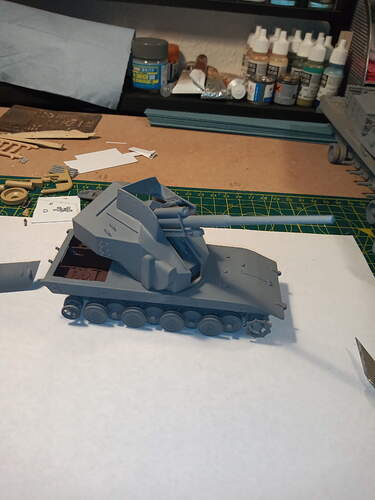 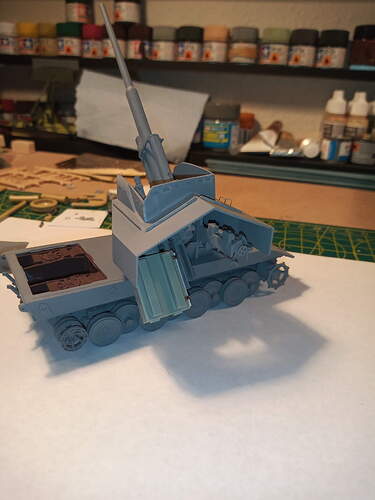 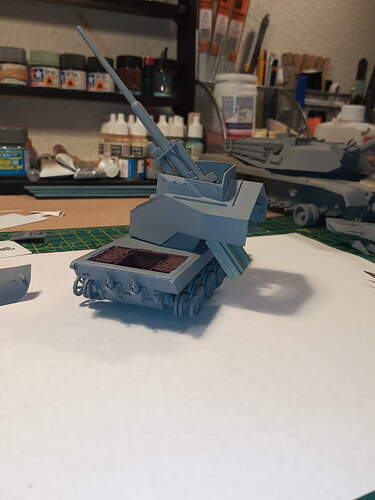 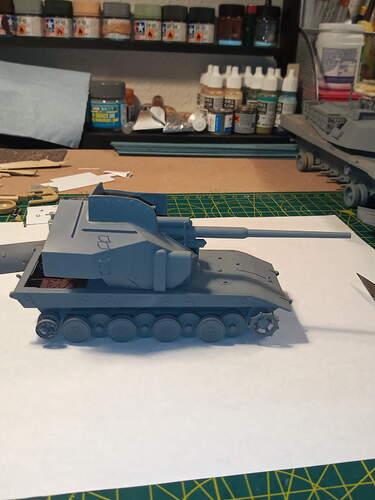 The ammo ready box seems with in reason to me. Admittedly, my knowledge about the E100 plans is very limited. Its right in character of the WW2 German AFV philosophy for the E110 of trying also sorts of options to try to improve combat performance.

Thanks Wade, I thought I could use a bit of artistic licence with this one. And as it’s hooked up to a never made King Radar tracking wagon I thought what the hell lol…

Looking great John and some super innovations on your part! Excellent save on the turret armor - wonderful surgery there. I like the autoloader. Fits right in with the whole E-100 theme. Congrats on overcoming the shortfalls of the kit and producing a real little jewel.

Cheers Matt, it’s actually a nice little kit. I was just surprised the error in the upper turret armour that prevents full elevation (and that the gun has to go over the side to also achieve full elevation).

Due to the gun having to be over the side for full elevation (and the possibility of me having the engine access deck up ) I have had to cut down the side skirts into the 3 individual bits ( thank god I got that razor saw). I have added some strengthening plastic as per the 1/35 ones. Not perfectly matched but could enough for a slacker like me 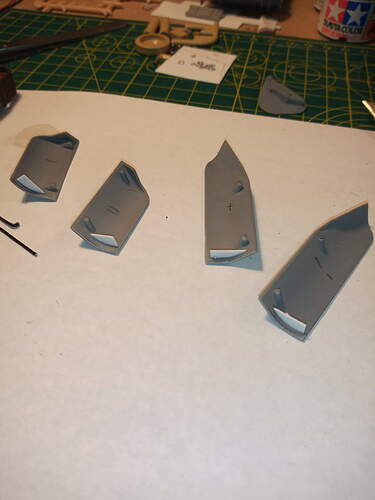 Have also painted up the engine as much as it needs if I do have the deck up. And will fit that in later. 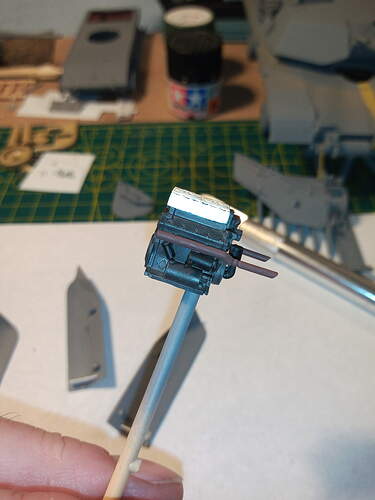 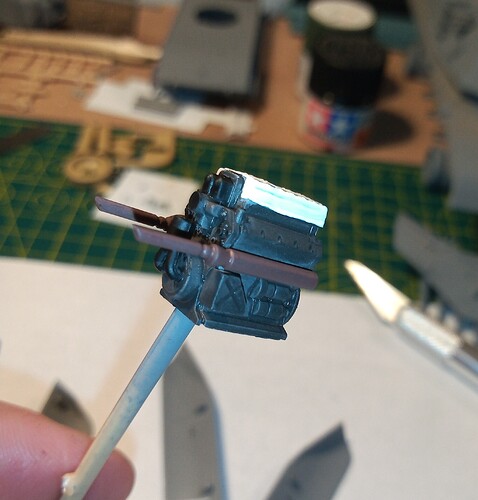 Engine in and engine deck down. PE grills and driver’s sight cover fitted from the PE fret. 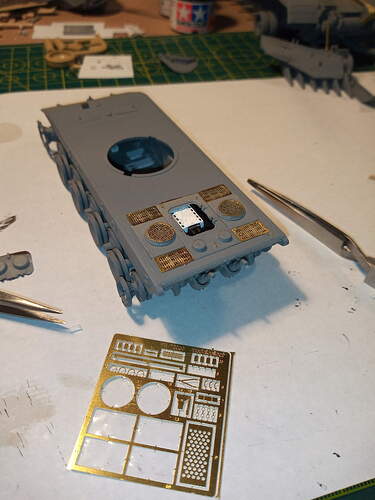 Got some paint on on the gun assembly and inside the turret. 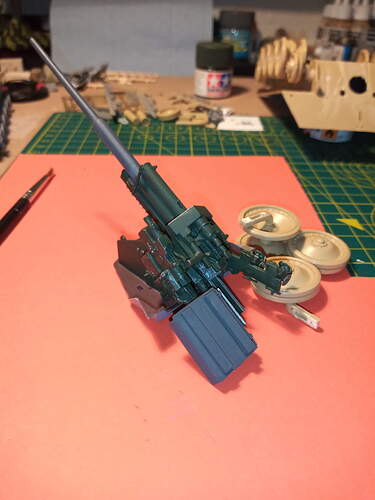 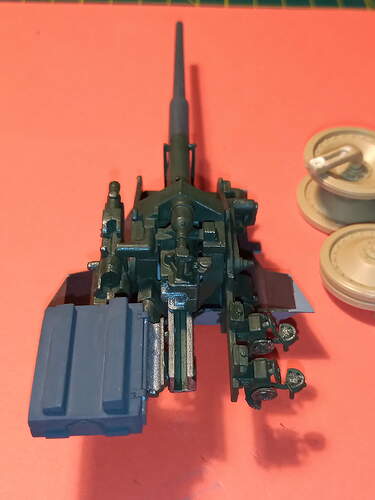 The last 2/3rds of the barrel were meant to be dark grey, but I may have to redo it and mix some black into it as I’m not happy with how light it is. The ammo ready round box is German grey and the gun assembly is one of the Japanese greens. 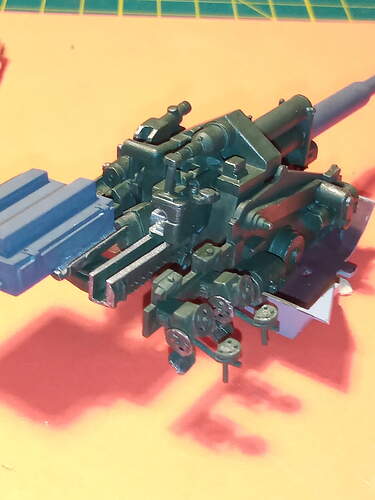 Inside of the turret is a mix of white and tamiya flesh, about 90/10 mix. Works ok for me and it’s all I had at hand. 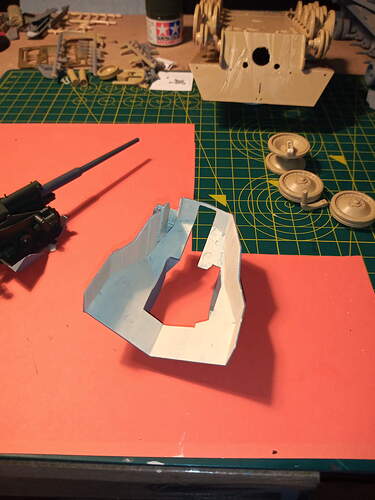 I’m not worried about the few sink holes as you can really see them once turret is the right up. 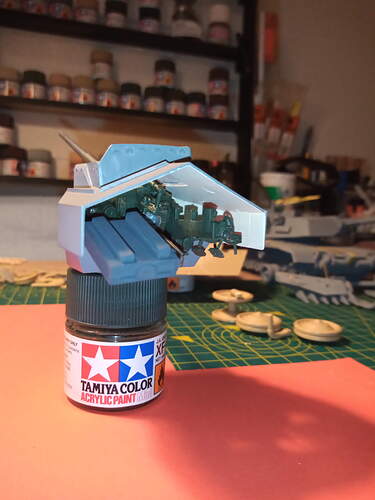 I may try to add some internal turret lights for night firing… Just a maybe… And I am thinking about some random bits added to inside of turret walls & roof as I’m sure there would of been if one had ever been built.

Colors look beautiful John and your detailing is excellent especially for this small scale. The whole tank has a rakish, business-like look to it and I really dig all of your extensive modifications. They all make sense and look great.

Thanks Matt, much appreciated mate. I really like the concept of the AA E100 and the R1 missile wagon. I am contemplating doing one in 1/35 if I can find one at a sensible price or on auction.

Loving what your doing!
If you built one in 1/35 what would your base kit be?

Thanks Ezra. I think after having a look around the only real option is the Trumpy E100 Flak Panzer with twin 88’s in 1/35. You could buy an E100 tank and a Flak 40 128mm and mate them together but I think that would be 2 expensive. A 1/35 E100 128 Zwilling would look pretty cool, but I dont think you can get them… although I was sure I had seen a build blog on one someplace ??

John, the current project maybe in 1/72 scale but I think you’ve achieved 1/35 scale looks and impression with the attention to detail and quality build.

This thing with the gun not being elevatable except when it points to the side is quite strange. It seems like the breech end is too long or the trunnion mounts are too far forward - I guess those come to the same thing. The old Chamberlain / Ellis book has photos of mock ups and includes something quite similar to this, a concept for the 12.8cm mounted on a Panther chassis, which seems about the closest thing to the model you’re building. 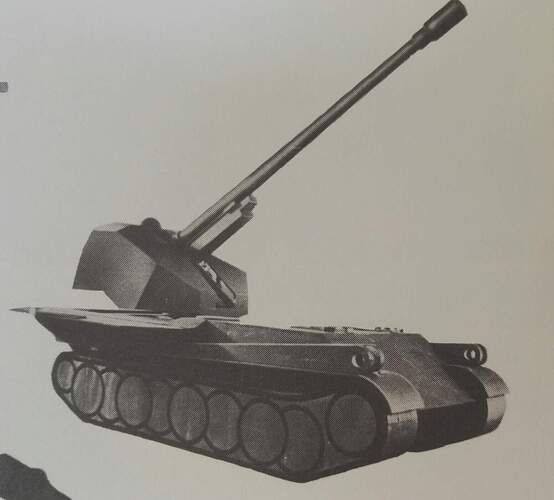 Anyway, great work in spite of Modelcollect seeming to have lost the plot slightly!

Thank you Wade & Matthew @Armor_Buff & @FirstCircle really appreciate the feedback.
I agree Matthew, it does seem odd that they overlooked it. It is just a shame I had to chop so much of the turret roof to get any decent elevation. Hopefully the end result will be ok.

Managed to get the base coat down now.
Used Tamiya NATO green, will do a splinter cam over that. Not sure if it will be the turret only or whole upper hull and side skirts. And also not sure what colour to go with… 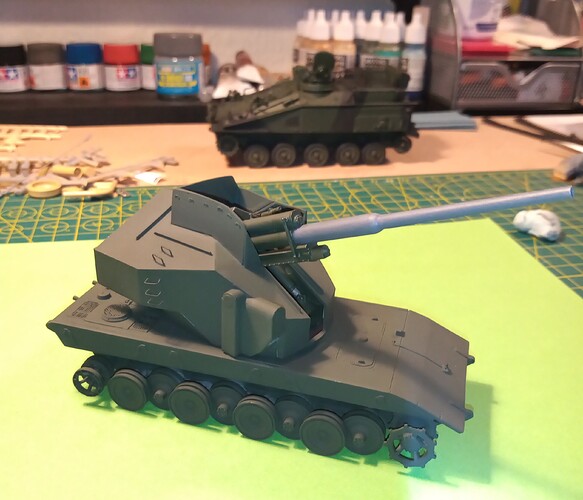 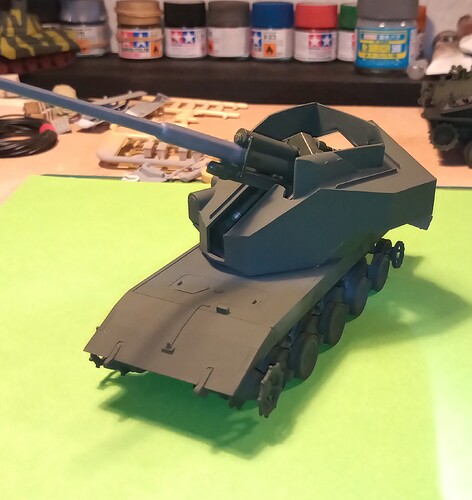 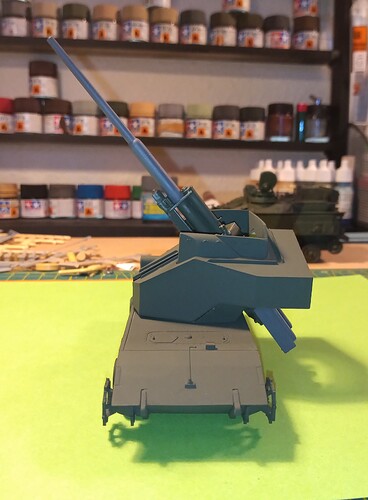 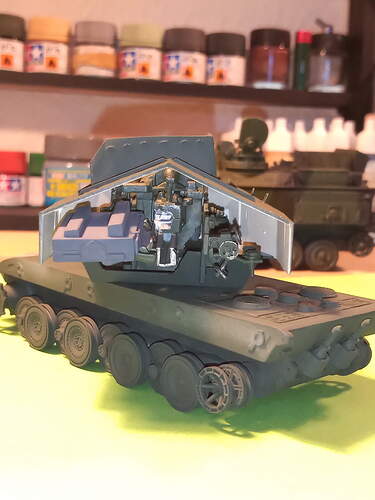