Currently working on updating/rebuilding the old Monogram M34 kit. I’m looking for an M35 fuel tank for it, among other things.

You’re redoing one as well?

I’m finding quite a bit of the AFV Club kit helpful in restoring that old Monogram woofer.

Yeah, I started with one of the old white box kits from the 70’s but the parts were so warped it started to be a scratch building project. Thankfully, I lost that kit somewhere & started over with a green box kit from the 60’s. Much better.

I’m planning to use wheels from a DEF Models M54 front wheel set & some M35 parts.

If the link goes through, I found this site full of M34 pics. Looks like Germany in most.

Interesting. This is something I have also thought about doing.

In the above article, it shows what they call “Combat Wheels” that look like the same rims as on halftrack front wheels. Another wheel/tire option. 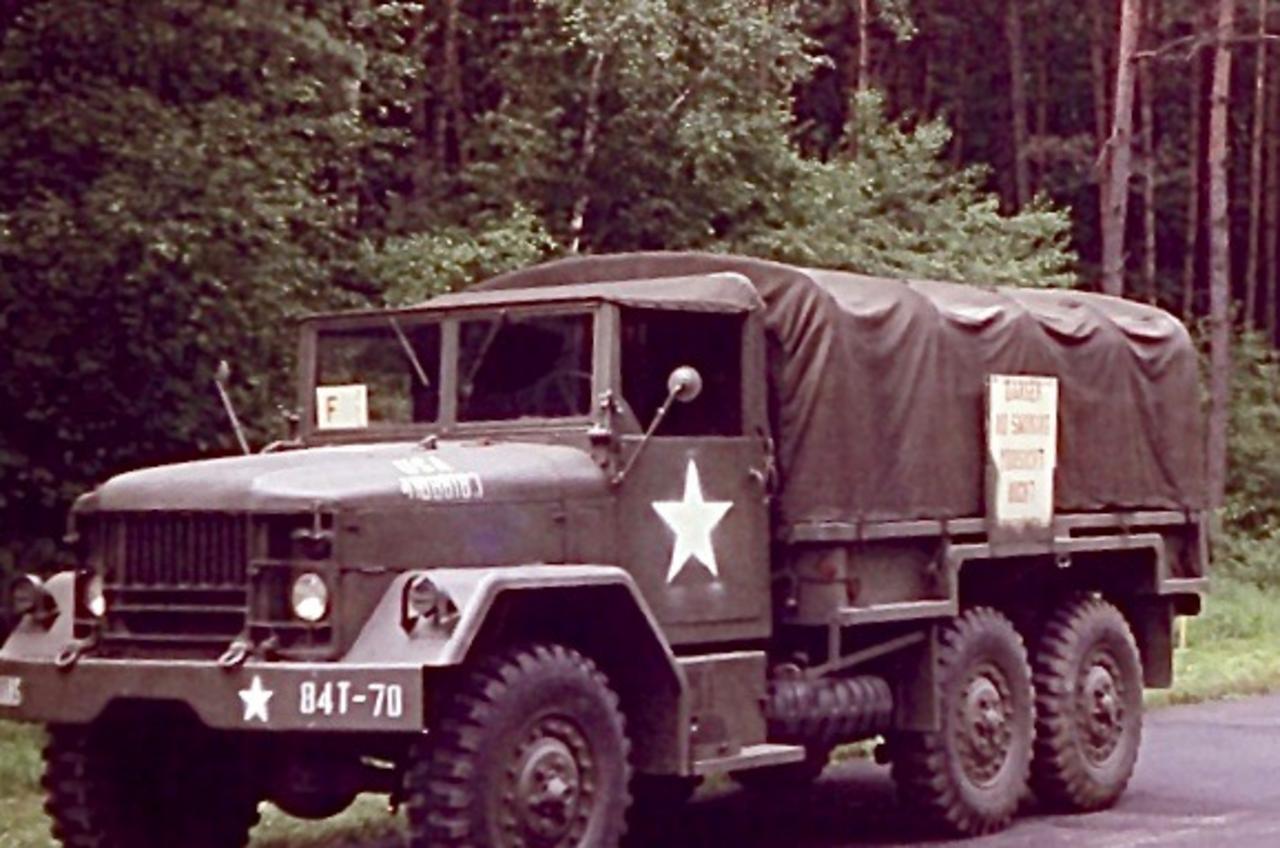 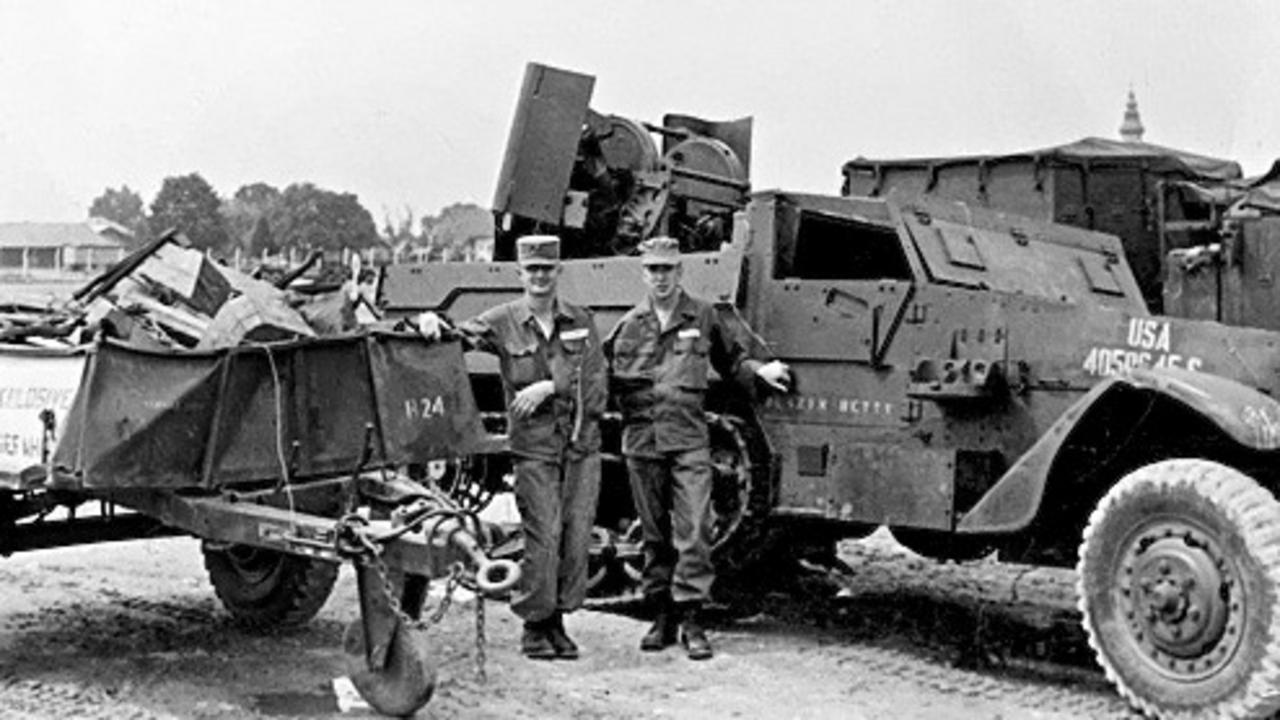 Interesting TM drawing from the Army Transportation Museum with the combat wheels too.

Other than the bed and larger wheels, isn’t the rest the same as an M35? I would just add the bed to an M35 with the bed risers removed from the frame. 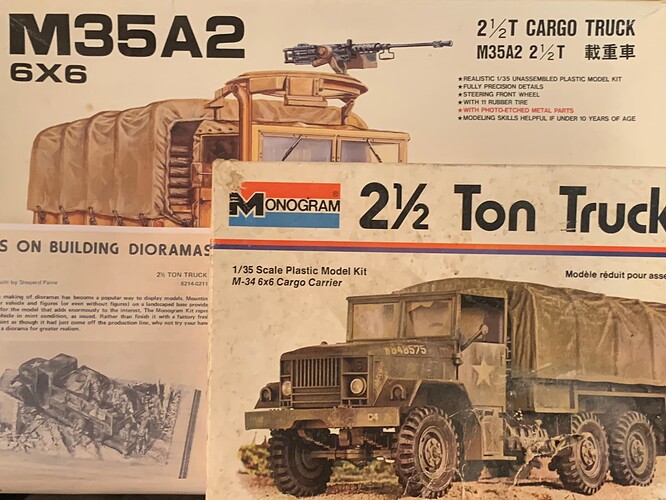 The differences in the two trucks are many - some nuanced, and some quite noticeable such as the air intake on the right side of the hood, and of course the exhaust stack and the very obvious change in headlight orientation. Combat wheels referred to the two (actually three if you count the lock) piece wheels that allowed the tires to run flat. Modern tires will run on them. I remember dealing with them. They had to be disassembled in cages lest your carelessness caused the halves to fly apart causing serious injury.

Low headlights, right hand air intake, and exhaust out the side between the right rear wheels are also features on early M35A1s. 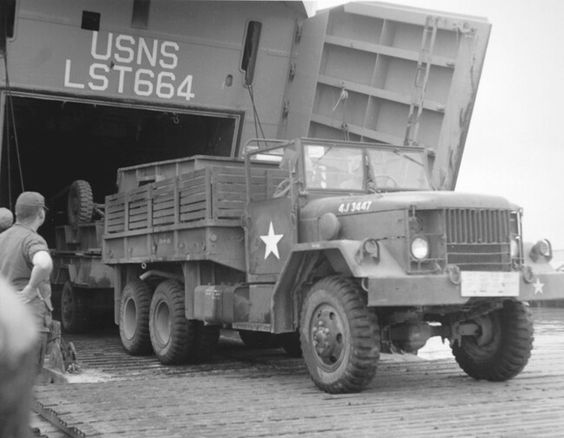 Detail wise, I was thinking of backdating the AFV Club M35A1, using the M34 bed, and modifying what is needed. In my opinion, it would be a better overall model than trying to bring the Monogram M34 up to current standards.

I’m building the M34, not the M35A1. There’s no air intake on the side, and there are still other differences. It’ll have to wait until I finish these Atlantis trailers…

The man who inspired a generation.

I might go that route too. Big things are the tires are bigger on the M34, more like 5t tires. That’s the reason for the stepped cargo bed. The old turn signals & blackout lights.

He did. I grew up in Chicago & remember seeing his dioramas at a hobby shop in Evanston Illinois.

That is what I am talking about. The M35A1 has most of the same features as the M34. Just add the larger wheels and bed to it and modify/add/change whatever else is needed to backdate it. The wheels/tires are the same as the M54; 11:00 x 20.

I saw the wheels too. I wonder if that was a unit thing. The same article shows an M16 AAA halftrack & M15 AAA halftrack at a firing range.

I’m using DEF Models M54 wheels when I get to that point.

Split rim deuce and a half tires. Had to be inflated in cages because if the rims weren’t seated properly the rims would blow off with enough force to cut someone in two. I remember idiots standing on the rims to “enjoy the ride”.

For awhile, it was an Article 15 offense not to use the inflation cages.

The 11.00 - 20 tires were the same Military Desert tires used on DUKWs. They used combat rims to prevent the tires from detaching when run at low pressure in soft terrain.

It’s been four decades since I last saw the Monogram kit - is it 1:32 or 1:35? If the latter you can use the DEF model DUKW wheels as they don’t have the central inflation hubs.

Wow that is just nuts. And I thought only infantry guys did stupid stuff lol!