I have the idea to make MRE boxes out of resin with provided decals instead of cutting folding and glueing tinx pieces of paper. Some companies think that the costs for the decals won`t justify. Any thought?

I like the idea of a more “solid” box. I find folding and gluing a bit of a chore. I know some wrap their paper boxes around a balsa wood core. Can’t speak to the cost of decals. For me resin and decal boxes would come down to the number of boxes in a pack and the cost. Nice idea. Hope it works out.

I think that resin with decals would be a very good idea; fiddling with small bits of card can sometimes be a bit tricky.

Some British ration boxes would also be very useful.

I think decals on a smooth resin box would result in a box that is too smooth.

bild1000×493 50.1 KB
These look as if a model builder had failed slightly when folding those tiny pieces of paper.
Misaligned and uneven … judges at a model competition would shred this guy for assembly mistakes …

Did you plan on making individual decals for the various texts and bar-codes and have the structure of folded cardboard in the resin blocks? Two decals for the sides with the ugly joints?

sounds an interesting idea but the cost of the decals might make it a more expensive alternative.

good luck with your idea.

As someone who runs a little side gig making decals, it really depends. For MRE size boxes in resin, the cost wouldn’t be that great, so it really comes down to making decals being the deciding cost factor.

Most large companies outsource decal printing to screen printing operations, which is why their decals are only as large as the marking and will lift off the backing paper in water. For smaller operations making decals, often what we do is print on cellulose-backed cardstock with inkjet printers, then seal that all with lacquers. Although colour saturation is not as great, and you have a bit more film, any resourceful modelmaker can easily make these work. The advantage of this process is that the overhead is essentially $0, so if you wanted to go the route of including decals, this is the way to go.

Just to give an example, the main cost for myself when doing custom decals is actually the labour involved with making the design, and not the paper, ink, and varnish.

I brought the idea to various companies, but with no result til now. @ Robin I dont think that the texture of the cardboard would matter in scale.

I checked several scale MRE boxes and found that there are too many differences in size. The real box is 431mm x 270mm x 232mm. Which translates into 12,3mm x 7,7mm x 6,6mm. MRE Boxes from J`s Works are 13,7mm x 9,2mm x 8mm, way to oversized.
Tamiya Boxes have he right size but the paper is quite thin. Do anyone have experiences with MMK products?

As someone had pointed out in a different thread regarding MREs, there are two sizes of the cardboard box, depending on the time frame. The earlier box was more similar to the former C-ration boxes, while the current box is what appears in the posted images in this thread.

That is correct. The smaller cartons are correct for the period of the Desert War to the late 1990s. The larger boxes came into use from the late 90s to the present…

I was thinking about the edges where cardboard overlaps, meets the edge from the other flap or is folded: 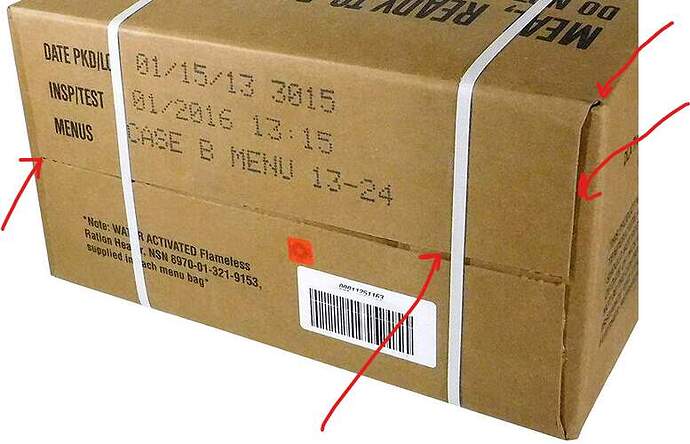 Many years ago I printed these US WWll ration boxes for myself. These are the waxed cardboard cartons that are shipped in wooden crates. The wood crates were disposed of and just the cartons issued. I had to cut them out individually and fold and glue them together. They are a bit crude but look better in 1/35 or 1/48. I could mangle them and crush them like the real ones. 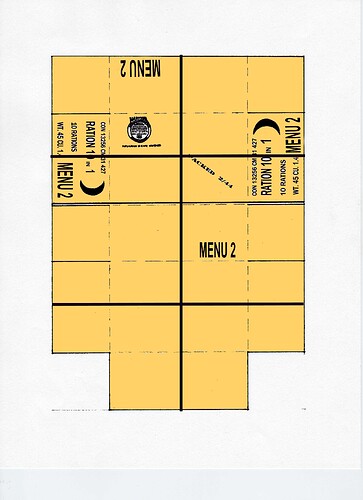 Would a piece of balsa/basewod with the wraparound be easier and cheaper-both to produce and purchase?

My main bugbear with the printed paper ones is trying to lose the thin black fold lines on them when they are folded.