This is a converted 120mm Mitches Models resin Typhoon pilot. A modeler on Armorama convinced me to purchase one for Sci-Fi purposes and I kind of saw it as a scout with the cool pilot’s helmet and I knew then that I wanted a fictional U.S. Space Force Operator.

U.S. Space Force, a Department of the U.S. Air Force, deals with satellites, so this Operator carries a huge gun to destroy crashed satellites and other sensitive space debris or fallen rockets and vehicles vital to U.S. National Security quickly and usually from a distance, even in enemy territory.

His backpack carries three pop-up mini drones in cylinders for aerial scouting and he has multiple radios and SATCOM devices on his backpack and helmet to communicate with Headquarters and the National Security agencies. A visor lowers from his helmet over his eyes, feed by the optics and sensors above. His helmet has a thermal camera, a daytime and low light TV camera, laser range-finder, directional sound sensors, 360-degree radar, and white light.

He has a winch on his belt for fast hookup and extract via rotorcraft and he carries multiple knives, demolition explosives, two thermite grenades, a handgun, and survival gear on his belt and vest. A white and Infra-red flashllight is on his shoulder and he carries multiple IFF and GPS transponders. A life vest is under his tactical vest and around his neck for waterborne operations. He wears a flight suit and has armored kneepads and light tactical body armor.

Due to the toxic nature of crashed rocket and satellite fuel, he has an oxygen mask with NBC filter/ rebreather ready.

Note that this U.S. Space Force Operator is not a solider…his job isn’t to fight enemy troops and armor, but to destroy vital crashed U.S. space assets or retrieve the technology and as such he is armed and dressed appropriately. Nonetheless, the USAF Space Force believes that his large primary rifle with optical scope and laser designator is more than adequate to deal with enemy infantry and armor to get to the crash scene (since he won’t be alone). His rifle also has an under-barrel grenade launcher (it is based off of a Sci-Fi robot gun). 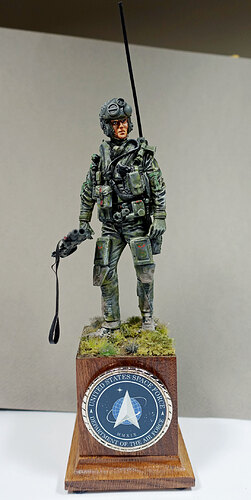 A very cool idea pulled off in great fashion. I like your thinking around the individual elements, particularly the drones on the backpack. The only thing I would change is the angle of the gun- it seems strange and a little weightless at the angle he his holding it. Changing it to sit at 90 degrees might make it seem more natural. I understand that perhaps it just wouldn’t sit right like that because I know converting figures can throw up all sorts of issues like that but its just my 2 cents.

Nice job, Pete; well done. I have this still in the box! Who knows, maybe this year I’ll get it out and finish it?