My First Emptied Bottle of Paint

Kind of a dumb landmark occaision but this is the first time I recall useing a bottle of paint til it was empty, usually they get syrupy in between uses and enamels get grainy when thinned once their shelf life has expired . . . 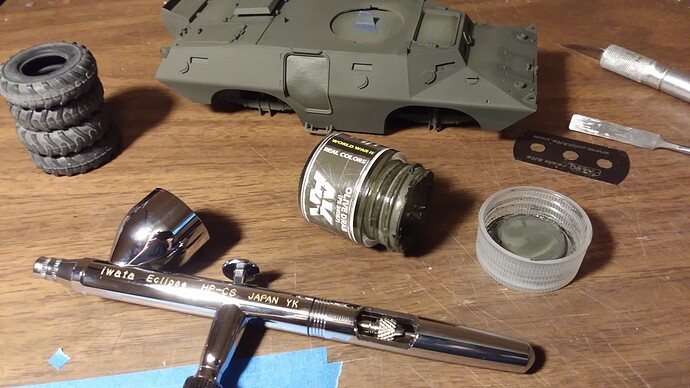 . . since switching over to AK REAL COLOR laquers I’ve been experimenting with the paint trying to learn how to work with it, such as dry brushing, washes and hand brushing . . 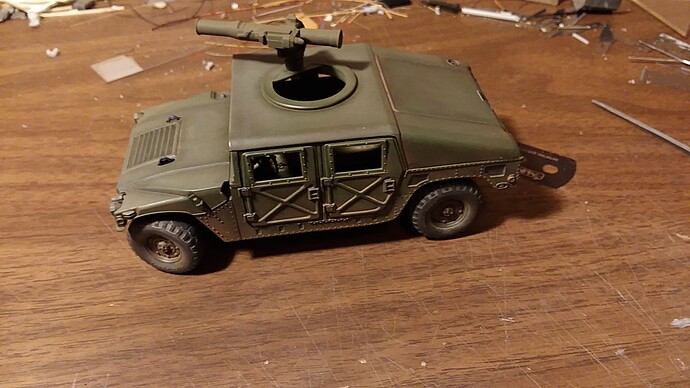 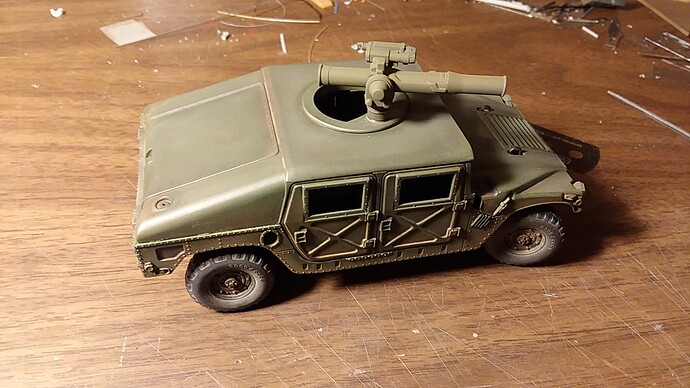 . . . the Commando up top was the fourth full model kit to spray out of this bottle and I have to say, I don’t know if it’s the paint or the Iwata AB but it sprays on beautifully, had an issue once because I didn’t thin it quite enuff.

The HUMVEE is the guinea pig for weathering and what I’ve learned is how laquer paint reacts to dfferent thinning agents, for example . . .
Isopropyl alcohol makes it frost, an intresting dynamic if you want a sun baked finish on an AFV that has that chalky white oxyidation on the surface.
Hand brushing is less than favorable straight from the bottle, it doesn’t want to level out leaving a noticeable brush streak.
Thinned with laquer thinner to make it level out is scary, it either goes down too thin and doesn’t cover, or if painting on top of another color or primer the laquer will solve the under coat and then you’ve got a real mess.
Thinned with acetone works rather nicely but don’t push it or the undercoat will come up.
The finish on the Humvee is the result of several attempts/applications of laquer on an enamel “dark green” base coat, thinned with alcohol, drybrushed with thinner, chalked, and finally just sprayed with thinner used to spray out the AB.
Well still learning, I’ve also started playing around with artists oils to make wahes, the M706 interior was the test bed for that experiment and it turned out okay when applied on a clear coated base coat, never had to go through all this with enamel paint but the mineral spirits thinner is just more than I can take nowdays.
Anyway, that’s what I’ve come up with. It’s an old dawg learning some new ways.

It has been said AK works like Tamiya paint sprayed. Tamiya is forgiving and it looks like AK is also. Nice job.

I haven’t even ventured into acyllics yet, I was eyeballing MIG’s paint line since they’re the latest greatest thing since crayons but I went the AK route, can’t help it, I’m just naturally counter culture, it’s all Nixon’s fault

I evolved from enamels to acrylics for all the safety/ fume issues but I am now drifting into lacquer based paints for the way they spray.

I love the stuff,sprays like Tamiya my local Hobby Town just started carrying the whole line

I can’t get the AK Real Colours to brush worth a damn either Cajun. They do spray really nicely though.

I have noticed a lot of consistency issues between bottles though. Some colours are quite thick, others look like they’ll spray right from the bottle. I’ve also found that some just don’t want to mix with lacquer thinner.

I have just got some AK Real Colors and I also have a bottle of their propriety thinner. I haven’t had the chance to use them yet, so I was wondering if anyone else has used this combo?

I use AK’s thinner to spray with and then use hardware store laquer thinner to clean up, been using acetone to hand brush with okay results but it evaporates rapidly.

You cannot brush paint AK or Tamiya paints like acrylics as that doesn’t work and you have to use a different technique. 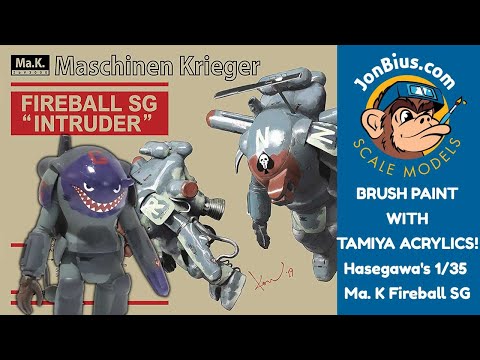 Something I’ve noticed also is that the colors don’t neccesarily mix with the expected results either, for example I tried mixing white with olive drab (34087) to get a fabric colored green but ended up with gray. I’m used to mixing my own colors so this is another aspect of AK paints I have to adjust to. Well, I’m all-in so shuffle the deck and let’s see how the hand plays out.

This was an interesting tutorial aside from the ramblings of the philosophies of modeling for fun, what the the heck is that about?! I’m creating master piece presentations here, researching the history of the subject, gingerly scraping seam lines, filling ejector divets, mixing toxic flammables, choreographing build sequences to coincide with paint stages, neglecting yard work, missing meals, hmmph . . . so paint retarder hunh? Seems I’ve read that elsewhere in the forum, maybe I’ll try that next. Wonder exactly what petro-chemical retards the evaporation of the laquer based carrier. Thanks for the tip Ryan, glad you’re always on the job.

I know I have posted that link on here before. It’s the only visual I have found for brush painting technique for Tamiya paints. Both AK and Tamiya make their own retarder. I use a drop or two on the lighter colors when airbrushing Tamiya. I have had issues with Tamiya flat white between that and Mr Lever thinner we had no issue at a club airbrushing class.

I love the AK Real Colors and have purchased the whole line. I use them whenever possible - they are my frontline paint brand now. The reason being for how exceptionally well they airbrush, and the coverage they provide. I also have not had many problems brush painting them, aside from getting brush marks. I have to try the thinner and retarder route. I have not yet found AK RC retarder. I was not aware AK made a lacquer retarder. @Tank_1812 Ryan, where the heck did you find AK RC retarder?
@agincajun Terry, now that you finally finished a bottle of paint, don’t throw it out. Drop it and the cap in a bottle of lacquer thinner overnight to strip it of paint and label. You can then use it for color and airbrush mixes. I’m glad you found AK Real Colors and are enjoying how well they perform. I’m a die-hard convert to them and won’t even go back to acrylics unless I can’t get the color any other way. I hope Real Colors expands their range and puts out more colors.

Ryan, where the heck did you find AK RC retarder? 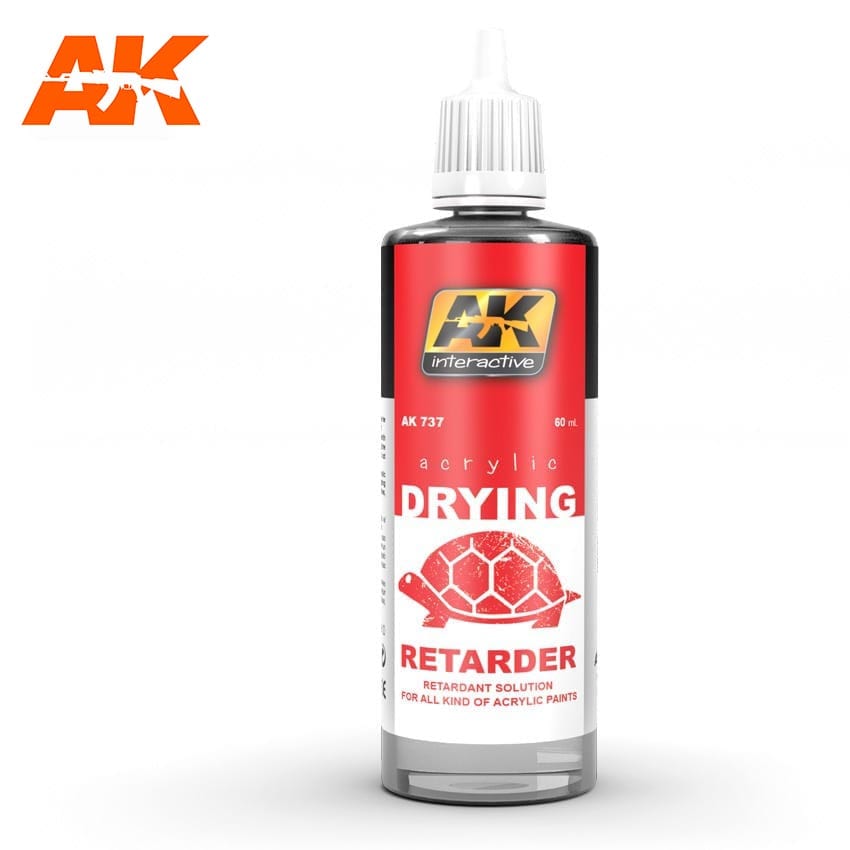 Can be found in states at M&M in Chicago and there are GTG.

Matthew @SSGToms , like yourself I’ve looked for AK RC retarder with “no joy”, it finally dawned on me this morning to use AK’s Acrylic retarder, I keep forgetting the acrylics and lacquers have similar properties so I’m hoping this will work, I really only brush paint small items like seats and duffels etc.