My Year of the Destroyer

I have apparently decided to go on a major fleet building project this year as I will be building ships for not 1, not 2 but 3 different Campaigns across the KitMaker network. I will also be building 2 ships for the one campaign for a total of 4 ships.

They are all running for 1 year so I have the time. I will be building them semi-concurrently.

Instead of having a new topic for each one I figured I would lump them all together into one thread.

For the Tin Can Sailors campaign I will be building 2 ships from the current Japanese Maritime Self-Defence Fleet. 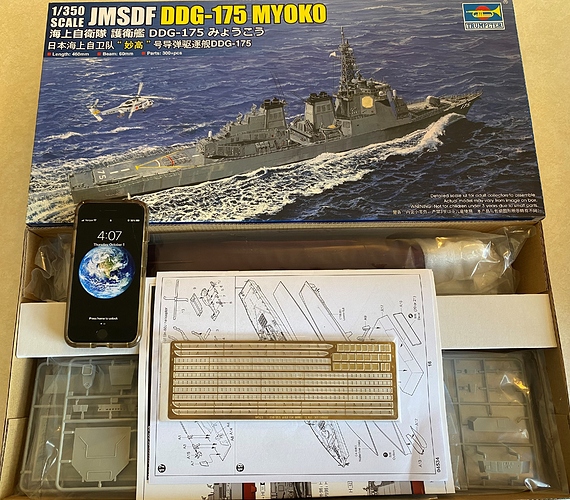 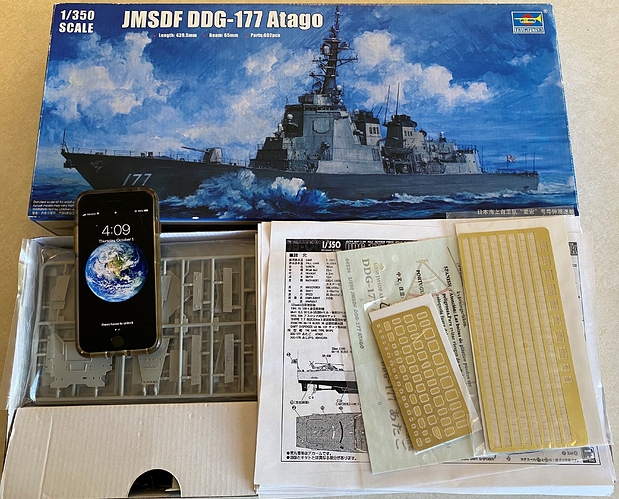 I currently only have Trumpeter supplied PE for them but I am seriously considering getting more advanced sets, specifically ones with pre-cut railings. While trumpeter supply generic railings they neglected to show exactly where on the ships they go.

Next up I have the Showcase Models HMS Vendetta which will be for the WW I CAMPAIGN Honoring WnW. While this is an primarily focused on aircraft it is open to all vehicles/planes/ships etc from WW1. 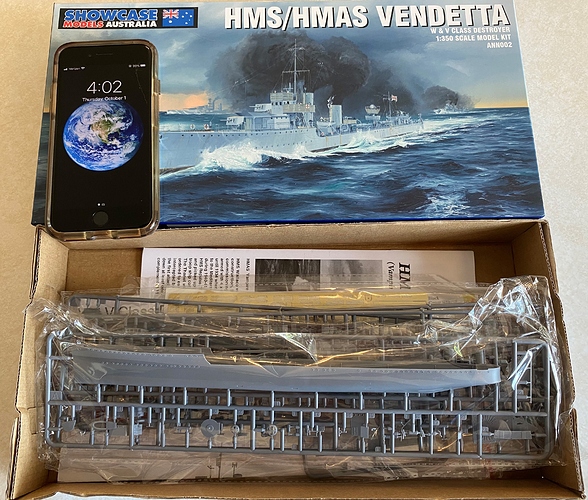 This kit comes with a very nice set of PE included so hopefully no further AM will be needed.

Lastly, for the Malta Campaign I will be building Trumpeters HMS Zulu (1941) in her late 1942 fit out. 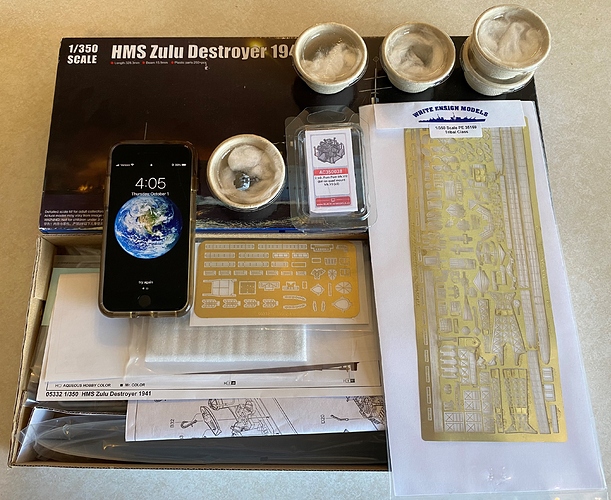 There is some work to do on this one. Not only do I have to bring her up to her 1942 specs but I also have to try mix the very well known issues with the Trumpeter Tribal’s which are the incorrect ships boats, the bow sheer and incorrect AA. I will not be messing with the screws, mostly because I cannot find a good replacement set. To help with this I have bought a bunch of AM. I will be laying that out in further posts.

A very ambitious work program for the year ahead!

Of course I am on board for the ride!!!

Started work on HMS Zulu. First things first is to fix the bow sheer. I was tempted to just leave it but when I compared the kit to pictures, the bow just looked wrong.

I made a wedge for the tip of the bow that sits about 3mm above where the deck would normally go. I then reinforced underneath with strips of plast-card. Once everything is all cured and rock solid I will trim the card down and will build up the side of the hull with further strips of plasti-card and putty and hopefully get it all neat and tidy. 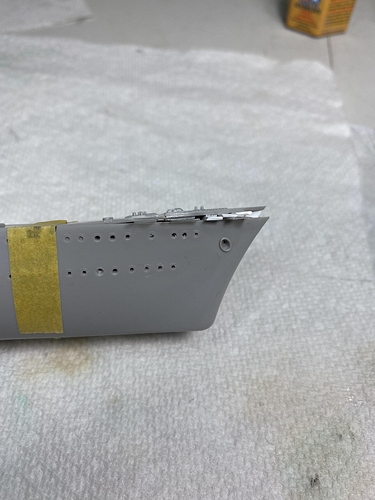 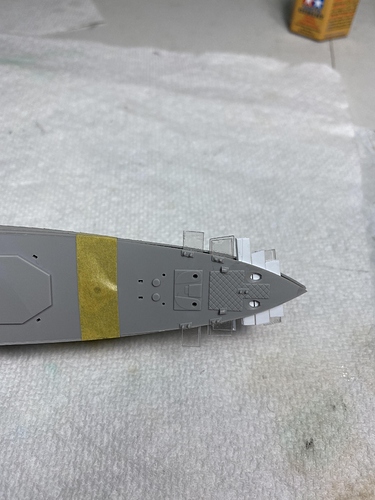 Great start on the Zulu! Shame that Trumpeter got it off in some key areas…

Was thinking about the Destroyer Campaign! Maybe you should be hosting it here on the new site?

Was thinking about the Destroyer Campaign! Maybe you should be hosting it here on the new site?

I thought about it but a lot of people haven’t moved over and this version is still in beta. Plus there arent Campaigns on here yet. Sounds like it will just be group builds.

You are right, its a real shame they got so much wrong with the Tribals. Its not like it would have taken much to put an extra 3mm onto the bow.

Speaking of, I have mostly completed it. 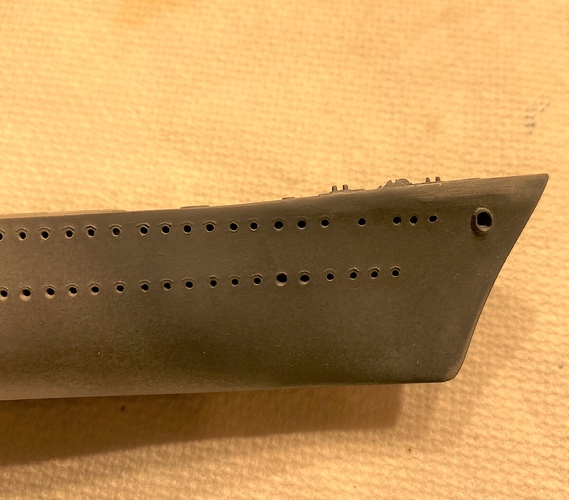 Just a bit more sanding to do. I am not entirely happy with it as the raise in the deck needed to start a bit farther back but it will do.

I also took the liberty of moving the hawse pipes up 3mm. Looking back I think I could have down this in a much easier way. Something to consider if I ever build another one.

Thing is I’m having lots of trouble with the old site and expect it to get worse as Jim progressively starts shutting it down… Maybe chat directly with him about the best location???

For myself I put a thread on the old site with a direct link to my type 45 build here so that people can follow us over:grin:

@Russelle I followed your advice, talked to Jim and have created a new Group build on here for the Tin Can Sailor Campaign.

I am not entirely happy with it as the raise in the deck needed to start a bit farther back but it will do.

Been a busy weekend. Got started on putting together the hulls of all of my DD’s

They all now have decks, screw shafts, rudders etc and will be ready for painting soon. 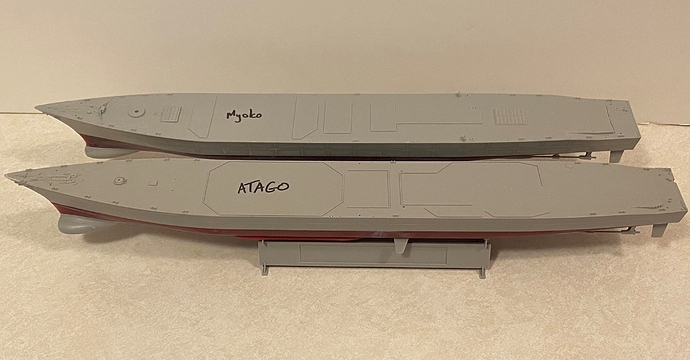 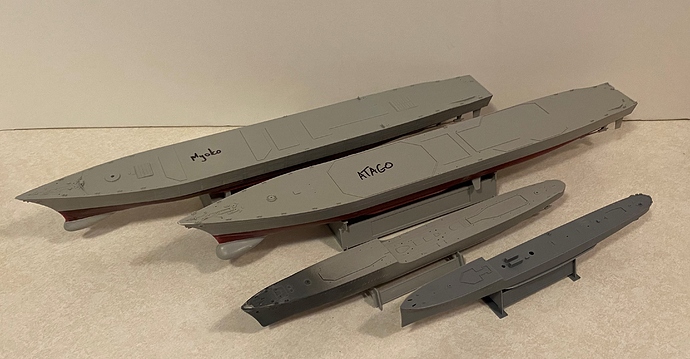 And lastly a size comparison to show how far Destroyers have come in the last 100 years or so. 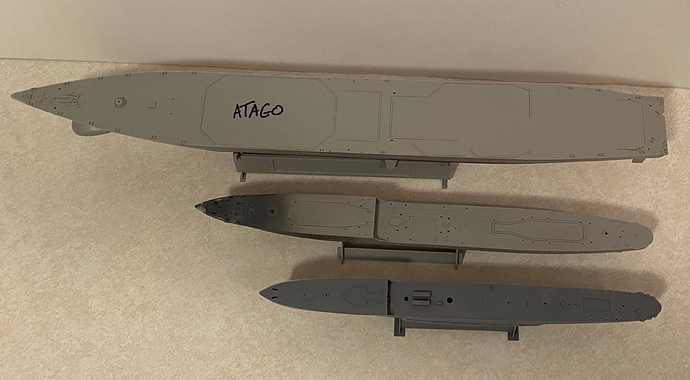 I hear what you’re saying about the growth of the DD! The Type 45 is nearly the length of the KGV (Although the KGV is about 7 times the displacement) yet a Tribal barely measures half the length of a Type 45 !

the comparison is pretty cool - thanks for doing that.

Nice work on getting the assembly line started - looking forward to seeing how they all come together.