Okay, I am getting very frustrated. I am trying finish up my T-54 build but it is not going well. The build up until this point has been my best build I think, but I am having some serious trouble in the last stages. I’m trying to do pin washes over a coat of future. The future has cured for about two weeks and I am using AK interactive dark brown for green wash. It is very dark brown, almost black in the bottle. I’m having two problems, 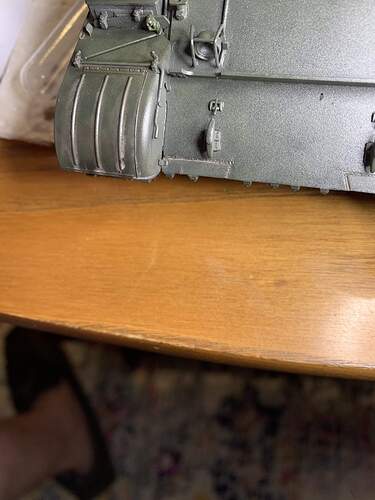 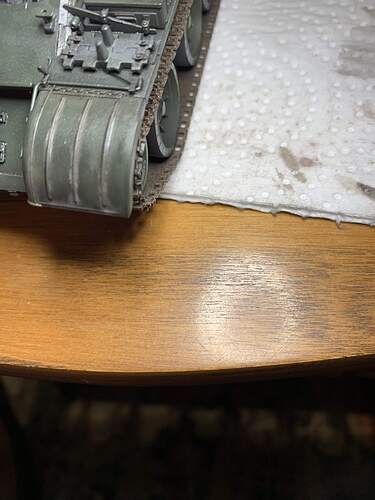 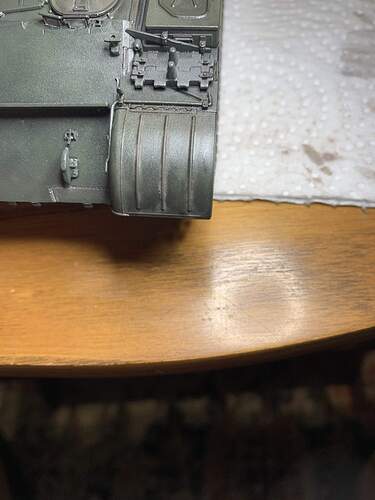 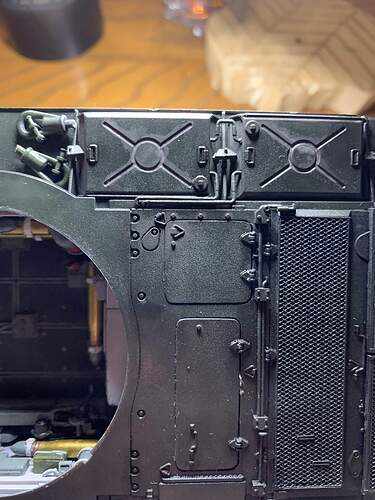 I have an AK dark brown wash. I didn’t think much of it so switched to the Tamiya panel line dark brown which is much better. I use bottle washes rather than washes I make out of oils on the theory that it’s going to be the same every time. But I also find myself just drifting back to a wash made with artist’s oil paint and thinner.

So, to the AK, I found to get it to do anything reasonable I had to shake it more than any paint I own. And I think at the first I actually stirred the bottom with a wooden stirrer.

I have not had it dry chalky, but I have had citadel washes (acrylic) dry chalky (on figures), and I didn’t know why on those either.

I would take the back of a paint brush handle and see if the AK wash is completely stirred and well mixed. Next I would test on some painted scrap plastic or an old model. Ideally test on scrap plastic coated the same Future polish etc.

Can’t help beyond that as I don’t use AK/Mig washes.

Custom mixing one’s own washes from quality artist oils and mineral spirits or cigarette lighter fluid is fun & easy with a little testing on an old model.

I was doing that before and had also less than stellar results, chalked it up to me and not knowing what I was doing/mixing it wrong.

I’ll try stirring it better and applying to an old model. It almost looks like it’s reacted with the future, but I don’t understand why that would happen. Mineral spirit/enamels and future shouldn’t interact

I was an old school oil wash guy til recently when I bought AK enamel washes. I used the dark brown 045 and I too found you have to mix/ stir it quite thoroughly. I did not use Future ( never have) and 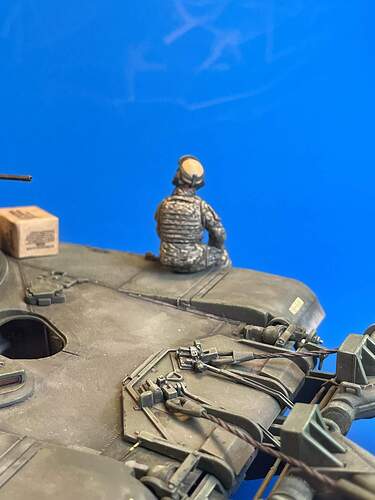 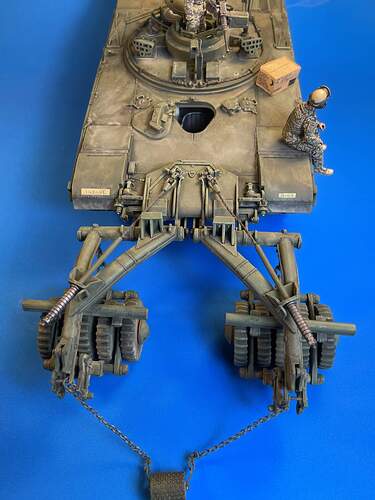 image3024×4032 773 KB
I only did a pin wash with it on my M1 Panther II mine clearing vehicle and I really liked the way it came out. I didn’t do an overall wash with it. I used AKs odorless enamel thinner to thin it here and there.
I also used the Tamiya panel line color in brown to add some slight rust to the tracks. Very good product but I also had to mix it thoroughly. Hope this helps.
Mead93 May 29, 2021, 7:52pm #6

Thanks, I’ll try stirring it more. I’m trying to do a pin wash too, but it’s doesn’t seem to want to flow around the detail, hopefully mixing helps

As I’ve said, I don’t use Future so it might be reacting with that. I don’t use any dull coats or anything.

I’m thinking it must be, there is no white or anything in the wash so I can’t understand why it would dry light or chalky

I heavily thinned my Dark brown and OIF AK wash and it toned it right down. It does need a mega shake though. I used the dark brown and that was thinned about 60/40 for a pin wash in the deep recesses.

Good to know. Did you thin with mineral/white spirits?

Tried both and tamiya X-20A, white spirit worked best, then the Tamiya thinner.

I use the AK products for my weathering. It is vital that you have a base of Future or another gloss or semi-gloss over the paint. This prevents tide marks. I personally use Future as it works perfectly right from the bottle to the air-brush. As others have stated the AK washes need to be thinned and thoroughly stirred before use. Thin with an enamel thinner or mineral/white spirits. I have a selection of their washes; but, usually just use the AK Streaking Grime for pin washes. It doesn’t need to be thinned and has always worked perfectly for me. After it has dried for 30 minutes to an hour, I gently wipe/rub the edges with a make up sponge to blend the edges.

Here is a shot of a Vargas Scale Models US Christie 1921 prototype that I finished last week using AK Streaking Grime over Future. 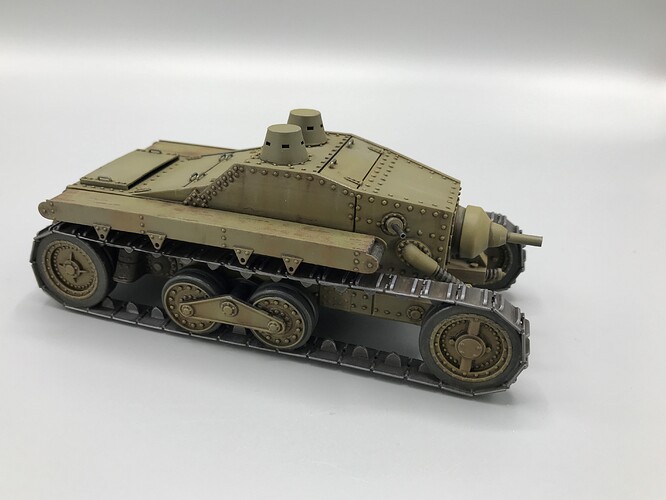 I also have a selection of the Tamiya panel liners. They work great, but don’t have a color that works well with Olive Drab or the other dark greens. I use the Tamiya black panel liner for around gun breaches, machine guns, etc.

Keep experimenting to find the technique, and products that works best for you.

I agree that you should check if there’s any pigments sitting in the bottom of the bottle. This is an enamel wash presumably, so you could just add black enamel paint, or oil paint, to it to darken it down more. Some paints certainly lighten up when they dry, and some washes also dry light because they’re so thinned down there’s not much pigment.
I found that some brands of white spirit cause washed to separate, including the cheap decorator stuff, but also some of the low odour ones. The best I found is Windsor & Newton Artists White Spirit, it stays mixed with the paint.
Recently I’ve been using Ammo oilbrushers for pin washes. I don’t mix up a batch of thin wash, I just have some paint in one plastic bottle top, some thinner in the other, and mix it on the brush, like dip in the paint, then in the thinner. It’s easier to get the thickness and intensity you want - it doesn’t always have to flow by capillary action, just paint it on carefully, and clean it up and blend it when partially dried.

Future does have its place in the arsenal but not for sealling prior to a wash.
In the art supply section of the craft store you can get gloss , satin , or flat in large bottles for a fraction of what the major model brands charge . It often appears milky white but does in fact dry clear

Are you thinking that maybe the future is reacting then?

Thanks for the help, I think mixing it worked. I thought I had mixed it before but just stirred it and then shook the living hell out of it for about 10 minutes and it seems to be going on better now. And weirdly enough it seems to be flowing too. I think the white was something reacting with the future. I’ve put a bit more future down and the white disappeared

I’m not sure if you are using the old Klear that was actually a clear liquid or the newer stuff that is a cloudy, lemon scented liquid. (This is what is now available in the UK/Ireland). The latter does not work well at all for washes or sealing paint or anything at all really in terms of models. I ditched it years ago when they changed it.

Basically if you are using an enamel wash you need either a satin or gloss varnish on the paint. It will flow nicely over both of these. Matt varnish can also be useful if you want an enamel product to make a surface very dirty because the product will kind of bite into the rougher finish. AK and Mig AMMO make varnishes ready to spray while Vallejo also make a super range but they need to be thinned a bit before spraying.

The chalky whiteness is the liquid/thinner part of the wash as opposed to the pigment, which is usually all clumped together in the bottom. This is usual in enamels (I still use Humbrol). Thinning it just makes it worse! I’ve got a Humbrol wash and it does the same thing unless it is really well stirred, then it goes on too thick! My technique is to apply a very heavy wash, not worrying too much about runs or tidemarks, then drybrush with lightened base colour to almost white. This gives a “cartoonish” effect, so I then dust a light base coat over it all to tone it down.

@Karl187 i was wondering if my future was a bad type, since I know they changed it 100 times over. My seems to be the older stuff, smells kind of sweet and dries to a nice hard shell.

@Hohenstaufen good to know the white chalky appearance can be fixed with a good stir of the wash, thankfully applying a thin coat of future over it killed the chalky appearance. Gonna stir the crap out of it and try again!

i was wondering if my future was a bad type

Well, we can’t predict your future!

But I found the “old” clear formula is now sold as Pledge Revive-It, and it works a treat. I avoided that milky-looking stuff because it looked like there were too many other additives that I didn’t want on my kits. One thing though - Pledge can fog a bit if I use too much decal-setting solution. That gives a similar chalky look, but it goes away with a fresh coat of Pledge (to seal the decals). I recall a similar problem ages ago when I used to use Testors Dullcoat spray, which then reacted badly to the alcohol used in then-current railroad weathering mixes. One (expensive) solution is to use Micro-Gloss for your glosscoats - it dries rock-hard and bombproof, but those tiny bottles ain’t cheap.