Hello All,
I’m hoping there are some here who will be willing to lend a hand with an opinion or two on some colors.
I have an U.S.S. Arizona, Teddy Roosevelt and Nimitz and need some guidance on what paint(s) to use.
Specifically, I have paints that need to be used up (I don’t want to buy any new paint(s)). I would like to hear what you folks have to say concerning which ones to use. I am not looking for approximate color matches.
The colors I have are;
Gunship Grey, Euro Dark Grey, Navy Gloss Grey, Navy Aggressor Grey, Aircraft Grey, Light Ghost Grey, Light Sea Grey, Dark Ghost Grey all Model Master.
I have CSX Grey, S.P. Dark Grey, S.P. Lettering Grey all Floquil.
Which of the paints would be a “close” match to use on the hulls, decks etc.?
Thanks to all who might be able to assist.
God Bless You,
Joe

Hi Stikpusher,
Thanks for your response. I will have to double check but I don’t think that I have any Neutral Grey. If I don’t, what of the paints listed would you think would be closest to the Neutral Grey?
God Bless You,
Joe

I hope this Link will help you…Cheers mark US Navy Camouflage and Color Doctrine – January 1 to December 16, 1941 - PDF download written by Jeff Herne, Ron Smith and John Snyder in July 2021 (Revised) Download Infographic below is included in larger document above: USS ARIZONA  1930s to...

The chart posted by surfsup is very helpful.

If you intend to build your model of Arizona as she appeared on December 7, 1941, be advised that the colors she wore that morning continue to be hotly debated. Discussions on other ship modeling sites routinely devolve into mean-spirited food fights of the worst kind.

Generally, there are two camps:

Some survivors were adamant that the crew had begun the process of repainting the ship into 5-S but that work was only partially complete at the time of the ship’s destruction. Other survivors stated the ship was still in dark gray when she exploded. So not even survivors of the actual ship agreed.

The truth may never be known.

It’s your model and your choice.

If you intend to build the model as she appeared earlier than 7 December 1941, the colors she wore are much easier to identify.

It should be pointed out that throughout 1941, the turret tops of turrets 1, 2 and 4 were painted red as an identification aid to spotter aircraft.

Hey surfsup & Model_Monkey,
Thanks for your responses. I took a quick look at the website and it looks fantastic. The thing for me is, it deals with the actual colors and I have no idea of how they compare to what I have. I’m trying to use what I have on hand and not spend more money. I don’t need to get the color “dead on” I’m just hoping to get as close as possible.
On a different note, what color would the aircraft be on the Nimitz and Roosevelt? The Nimitz is the early version with F-4’s, A-7’s, A-6’s and F-14’s. The Roosevelt has A-6’s, A-18’s F-14’s, EC-2’s and a few helicopters.
Thanks & God Bless You,
Joe

Your Light Ghost Gray is an excellent match for for the gray on Roosevelt’s and Nimitz’s vertical surfaces. Their flight decks, when fresh, are a very dark gray with a hint of blue that weathers and wears noticeably and quickly to a more medium gray, much like your Navy Aggressor Grey, but the weathering is not at all uniform. See: 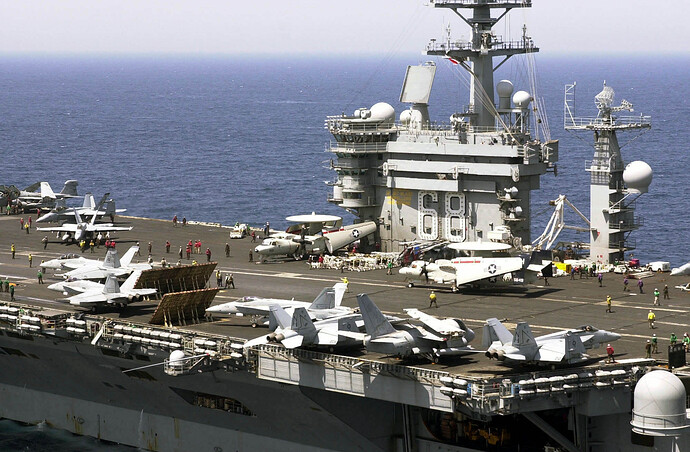 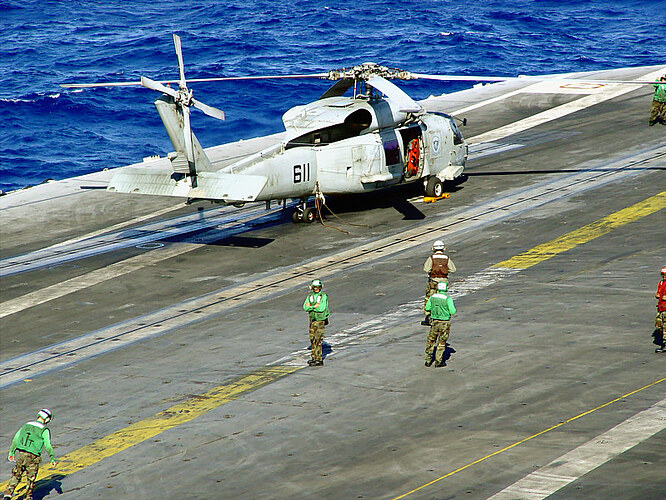 Your Gunship Gray will work well for dark gray 5-D on Arizona and for deck gray on her and other ships.

Not sure what you have is a good match for Sea Blue 5-S, which is a medium grayish-blue, something like this image from Colourcoats: 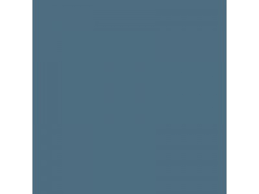 For Arizona’s fighting tops, choose the lightest gray you have, almost white.

The early Nimitz would have its aircraft in Light Gull Gray over White. The TR would have the air wing in the TPS scheme of Light and Dark Ghost Grays, with some areas in Gray Blue 35237. Not all units used the third color. Check photos of the squadrons embarked at the time you wish to depict.

Model_Monkey & Stikpusher,
Thanks for the additional information.
Model_Monkey,
On the Arizona, the deck would be a wood/tan with the horizontal surfaces (decks of the super structure) being Gunship Grey? All vertical surfaces (fighting tops?) would be the lightest grey I have? The hull would be considered a vertical surface being the lightest grey also? I wouldn’t need to worry about the blue unless I’m doing the “blue scheme”?
On the carriers, the hulls would be Light Ghost Grey, correct? Thanks for the pictures. It is great to see the actual decks.
Stikpusher,
The aircraft using the Light and Dark Ghost Greys would have the light on the bottom and the dark on top?
Thanks again for your time and help. I appreciate it very much.
God Bless You,
Joe

Not sure about the Arizona but when I was in the Navy ‘74-81’ all vertical surfaces (bulkheads etc.) were painted Haze Grey (thus the term ‘Hazy Grey and Underway’). All horizontal surfaces (deck, etc.) were painted Deck Grey. If I could find my old sea bag, I could dig out my old dungerees and take pics of the paint splatters on them.

Hi robbd01,
Thanks for your comments. It certainly helps. The dungerees would help as they would have actual paint “chips” to use as a reference.
God Bless You,
Joe

On Arizona, hull sides and superstructure sides are your choice of either Dark Gray 5-D (your Gunship Gray) or a suitable substitute you have in hand for Sea Blue 5-S. Fighting tops and the upper parts of the tripods are very light gray, almost white. The demarcation line between the light gray and dark gray is at the level of the top of the funnel.

Here’s one of the last known photos taken of Arizona, as she appeared in drydock during repairs following a collision with USS Oklahoma on 22 October 1941. The photo was most likely taken in late October. 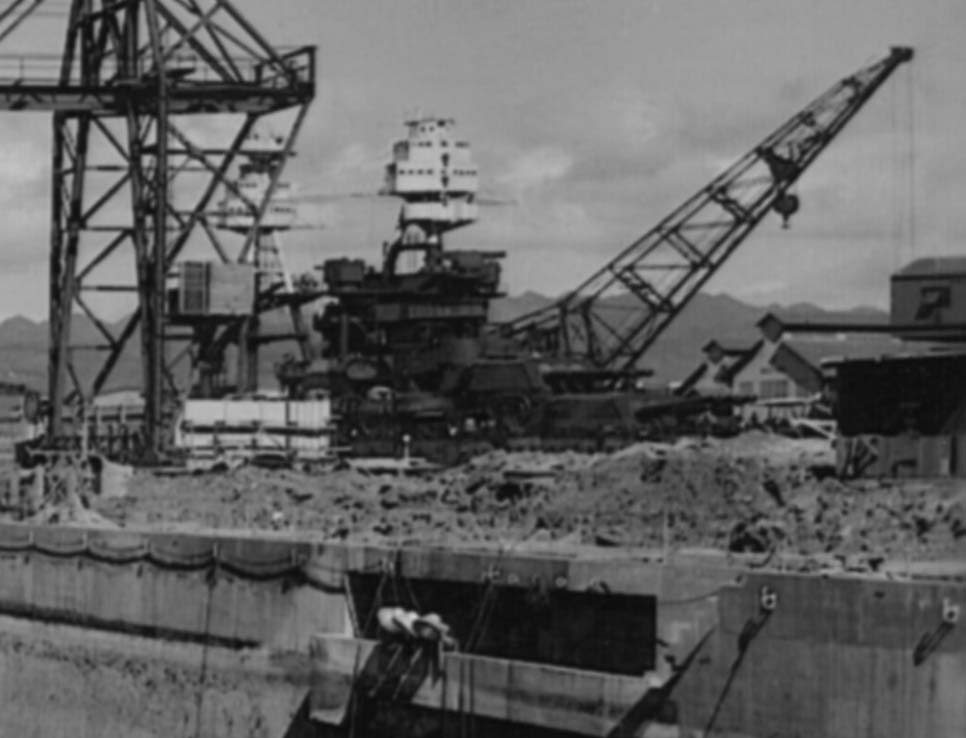 The following photo is of a well-done 1/200 scale model by Eric Szczesniak. Eric chose Dark Gray 5-D for his model. Dark Gray 5-D is very close to your Gunship Gray. 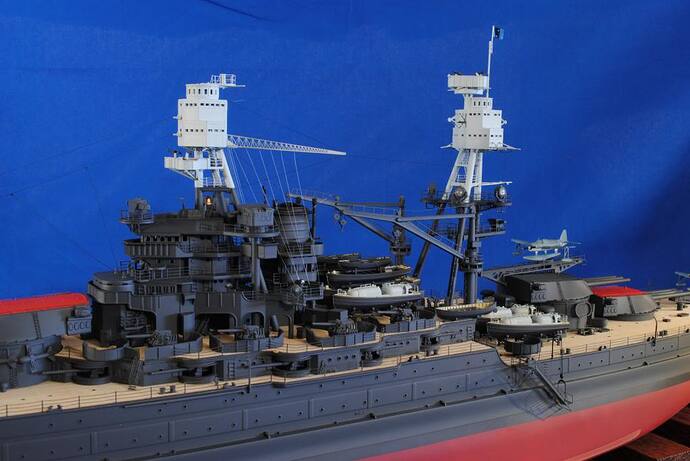 Below is another model, this one done in Sea Blue 5-S. This 1/96 scale model appears at the USS Arizona Museum at Pearl Harbor. Note that the 5-S is painted in exactly the same places as the 5-D in the photo above. Both models’ fighting tops and upper tripods are very light gray, almost white. Note that turrets 1, 2 and 4 of both models have red tops. 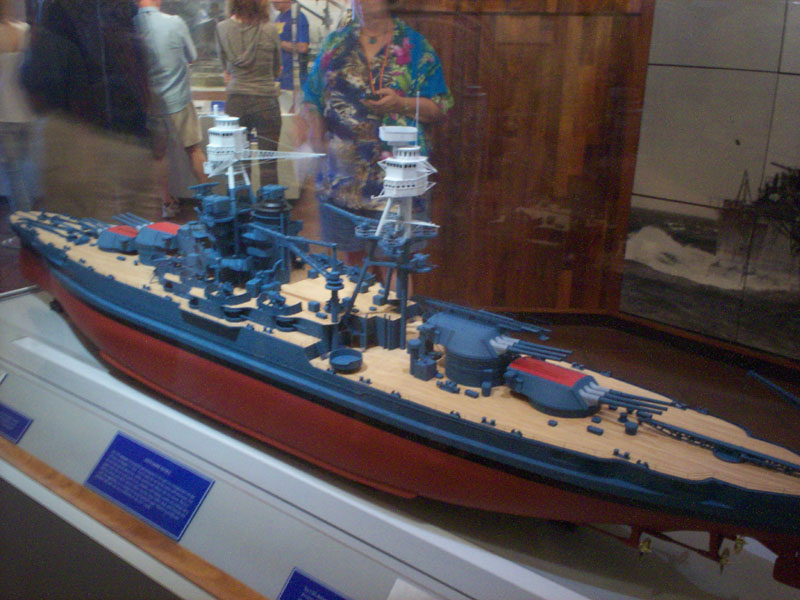 Regarding deck colors of the superstructure, there is some disagreement about that, too, unfortunately. Arizona is known to have had some or all of the superstructure decks covered in brown linoleum. What is less certain is whether or not the linoleum was ever removed as a fire prevention measure and the bare steel decks painted in Deck Gray. Jeff Sharp built his model of Arizona as the ship appeared in early 1941 in Standard Navy Gray #5 at a time when Arizona probably had brown linoleum superstructure decks. 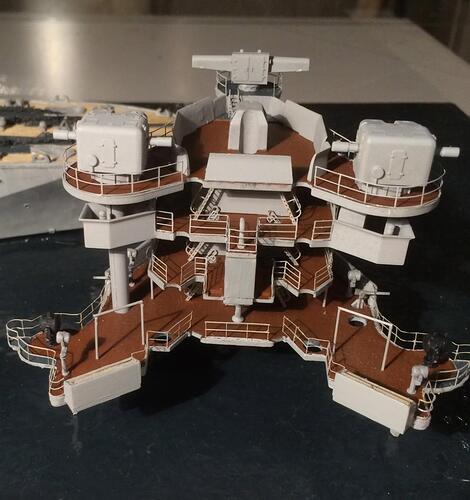 Below is a color chart by Snyder and Short posted on Modelwarships.com, reposted here under fair use. The Haze Gray shown in the chart is the latter-war purple-blue variant. Modern Haze Gray is noticeably different. 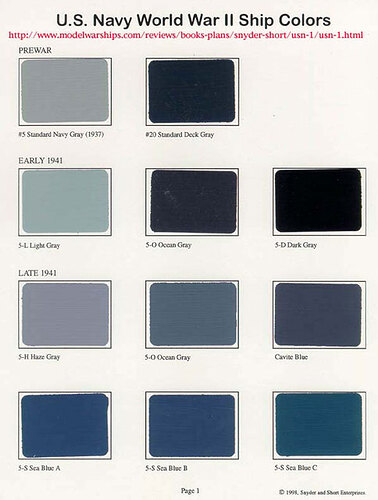 Again, it’s your model. Paint it any way that gives you the greatest joy.

Stikpusher,
The aircraft using the Light and Dark Ghost Greys would have the light on the bottom and the dark on top?

Here are some links from Scalemates on paints I have used in the past. They are old White Ensign Models Colourcoats which I think are still available under another brand (Sovereign Hobbies). I did not know that there was a different color of deck gray for flight decks. Being an ex-cruiser sailor I only knew of one deck gray.

Not sure how available they are now adays but hopefully you might be able to find a good match.
Oh FYI still looking for my old seabag

Hi Model_Monkey / stikpusher / robbd01,
Thanks for the additional information. When I get ready to paint I will have sufficient information to proceed with confidence. I am very appreciative for all of your time and effort in helping me.
God Bless You All,
Joe