I am new on the forum, building or converting mostly figures and building/converting modern Vtg sometime.
It’s clear I have to post Vtg in the Armor, but where post I figures.
In Figures ore in AFV Figures ?
Or everything related with military figures in AFV figures and everything else in figures.
What with figures that are not military but are designated to be a part of a military diorama.

Good question Jan… AFV Figures is a bit misleading title for the category, but I feel it is the best place for 1/35 figures, even if they are not armor related.

As for the large scale busts… As far as I know, Jim is in process of making a dedicated figure site for the new Kitmaker. Until the new site is launched, I would suggest your busts in Figures like you usually do. 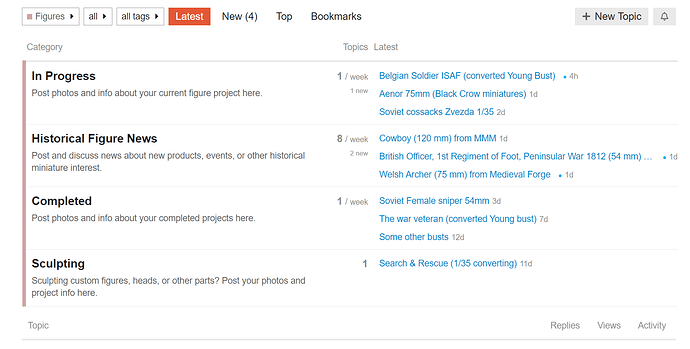 For what’s it’s worth, I’d say that you should post up your figures in which ever forum you prefer. The Figure forum puts the emphasis on the figure work and painting, while the AFV Figure forum rather links the figures to vehicles, dioramas and vignettes.

The AFV Figure forum probably gets more attention because it’s a sub-forum of the AFV forum (which, I believe is the most frequented of the KM Forums). On the other hand, the Figure forum is probably frequented by folks who concentrate on the skills and craft around that modeling genre. I suppose it might depend on what sort of discussions and feedback you’re looking to generate.

However, there are no hard and fast rules about which forum to use, really. I don’t think anyone is going to tell you that you’ve posted your figures in the “wrong” forum.

I don’t think anyone is going to tell you that you’ve posted your figures in the “wrong” forum.

There is always one in every crowd that will but unless it’s Jim or a mod who can move the thread themselves, I wouldn’t sweat it to much.