Has anyone seen the pics floating around of the new color used by the french army on all thier armored vehicles is it going to be wide spread and are there any pics of the VCBI IFV and Leclerc in it
and what color would be a good match for it
?

This color is called brun terre de France (France earth brown). It will be applied overall the army vehicles as a base for any required camouflage. Depending on the theater of operations various stickers are supposed to be applied.
For pictures of VBCI and Leclerc painted this way Google 14 juillet 2021 parade.

I have no idea for a a suitable paint match yet. Maybe Tamiya XF-52 Flat Earth could be a good starting base.

They shouldn’t be too hard to source. If you can’t find some send me a PM.

Video of the 14th of July parade.
https://www.youtube.com/watch?v=zMn-zzUsgLI
If I will paint it I´ll try a mixture of Tamiya XF-52 and XF-57.

Here’s a link to a photo of an AMX-10RCR in the new color: https://i.ytimg.com/vi/kzICEFGehmk/maxresdefault.jpg

It’s an interesting way of doing camo- I wonder if the intention is to apply things in theatre or prior to deployment.

Yeah it looks like a dark earth color. Very interesting

I found this new color very similar to the brown shade of the old three-color camouflage.

any idea if that brown is available for AK?

Didn’t the British Army aslo go to a Flat Earth scheme for their vehicles?

Personnaly i don’t like this colour, difficult for a spectacular weathering.
It seems that colored nets (like baracuda one) will be add when need. For example in European zones green/blacks ones will be use.
We can dreams that model compagnies will produce late VAB and its successors.

Whats the purpose of this camo? Neither fit into European nor Desert environment?

It is supposed to be a base for specific camo schemes. Those would be created by adding stickers of different colors. The overall scheme would be a splinter camo.

I hope the stickers will stick tight. Otherwise, modellers will have a lot more options for weathering.

To be honest I’m a bit skeptical to say the least.

The overall scheme would be a splinter camo. 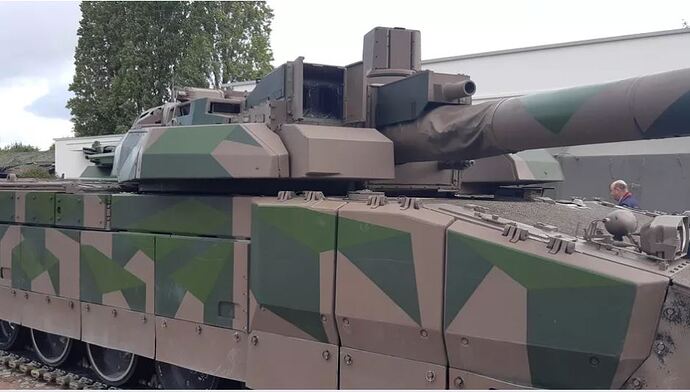