Hi All, been awhile since posting here. I actually just noticed that Tamiya has come out with a new (2020) 1/35 Panzer IV Ausf F kit. I know this is still new enough that perhaps no one has yet tried to compare this brand new kit to what I would call the prior (still?) gold standard Dragon Smart Kit 6315 Panzer IV Ausf F(F1). I have been concentrating these last few years on doing airplane models, so I’ve been a bit out of the loop on armor. I’m curious whether anyone has taken the time to directly compare the new Tamiya to the circa 2008 Dragon IV Ausf F(F1), to see if the new Tamiya is superior in any way, be it detail, engineering (fit), or accuracy. I’d truly have a hard time believing that the Dragon kit could be bested by much. So looking for input from anyone who may have done such a comparison. Anyone?

I’ll share experience and opinions for what it’s worth:

I built the Dragon Pz IV F and have the Tamiya Pz IV F.

The Dragon F the lower suspension, magic tracks and wheels are superior to the Tamiya Pz IV F. The Tamiya kit is very 1994 for the lower hull, suspension & wheels. The Tamiya bogies are sort of 1994 nasty compared to the Dragon bogies. Tamiya’s wheels being the 1994’s still lack weld marks on the rims and lack lettering compared to Dragon.

The Tamiya link & length tracks look very good. Not quite as sharp as Dragon’s link to link Magic Track’s. I pitched the magic tracks into the spare parts bin and did Fruils.

Moving to the upper hull and turret, the Tamiya mold quality is very 2020 and outstanding for the most part. Many weld seams and flat screw heads details are present finally on the new Tamiya kit that Tamiya ignored in the past. Dragon’s upper hull detail & turret detail are excellent. Tamiya does some minor annoying things like not slide molding the MG’s so the barrel needs drilled or replaced with an Aber MG barrel.

The three figures in the Tamiya are excellent. Tamiya gives you that silly string for tow cables still.

butt with ease in my opinion.

My Dragon F1 ate 56 hours of construction time excluding tracks
I’ve built a more elaborate Panzer IV H with lots of extra details, Zimmerit in about 45 hours for a 1996 vintage Tamiya kit. That’s mostly due to the extra time Dragon kits require with parts clean up due to excessive attachment points. Example Four attachment points for a Dragon road wheel.

While Dragon has a better lower hull, that’s usually the least visually interesting part of a model tank. The visual appeal is mostly in the turret and upper hull details.

Dragon F vs Tamiya F, if I could only have one, I’d rather have the Tamiya kit. Less hassle and time for 95% of the Dragon kits appeal.

Built out of the box the Dragon kit has the overall edge in detail. I feel that’s because Tamiya cheaped out by using that old 1994 hull and road wheels plus cut a few corners by not slide molding the MG’s etc.

If one starts splitting hairs on details both kits are lacking. Example the rear fender area engine flaps. Tamiya doesn’t have half wing nuts. Dragon has a bit of detail im that spot but it’s wrong as it’s not a half wing nut either. In other words both need extra work to take them to the next level of detail.

Granted many of the comparisons can be true; do remember the Dragon kit is just about 14 years old I believe, and in a few spots Tamiya shouldn’t have been so lazy. They shouldn’t have an issue with mg barrels or string for a tow cable at this stage in the game. But…I don’t think this is their number one priority compared to the rest of their product line.

Funny you mention all the Dragon builds: I am currently working on four old 9000 series Pz III’s and am at about at step 4 on each, got the uppers started on one. Then 6 more Pz III’s from the Smart Kit era and one Mini-Art. Started on the 1st. Trying to complete a ‘tech tree’ (Need an A, C, D and Stug A).

I actually built the 6315 myself. Built 7 of their IV’s and have 17 more to go, so I’m kind of locked into a contract at the moment. But I get the ease of build aspect completely.

Wow, thank you both, in particular _Buff, for outstanding reviews, and EXACTLY what I was looking for!!! SUPER review!!! And your opinions are worth a lot, to me. If the Tamiya was ideal in every way, I’d go ahead and get the new Tamiya, and pass on building the Dragon kit that I have. I have a number of Dragon armor kits in my stash, which I bought years ago, before most of the new manufacturers came out with their amazing armor kits that we all have access to today. I was hoping that the Dragon kit, despite the amount of effort it takes to build, would hold up, at least reasonably, against a tank molded using today’s technology. Thank you so much, again, for both of your insights and taking the time to answer my question!

Always happy to share my thoughts on Pz IV’s.

BTW - Tamiya has another new Pz IV coming. I think its a Pz IV G and builds on the F kit.

I actually built the 6315 myself. Built 7 of their IV’s and have 17 more to go, so I’m kind of locked into a contract at the moment.

Definitely understand that contract! I’ve built 3 Dragon Pz IV’s over the years and have 18 sitting on the shelf waiting their turn. Kudos to you tackling an Imperial 9000 kit.

Any advice you share on making a Dragon Pz IV build a better experience would be greatly appreciated.

How have you found the Dragon Pz III kits? I have a few of them but haven built anything other than their older Stug III B.

As for the III’s, I’ve completed 6642 (H Tropen), 6604 (M Kursk), 6756 (Stug F), and 6749 (sIG33B) as well as two 9000 Stugs (B & G). I have 24 kits total, all Dragon/Cyber Hobby. The 6000’s, especially the Smart Kits, are definitely easier than the Imperials. A lot less cleanup and the newer tooled parts fit better and have nicer detail. Two of mine are repops with DS tracks so that made things easier; the other two were Magics which I don’t mind assembling. Since building tracks is just following the same routine over and over and attaching it to the previous attempt it was similar to line work I did at a private business working a matte-cutter and a shipping line. I kind of go into a machine-like rhythm. I also am attempting my current mass-build as a series of subroutines. Build each to the same related stage (1-4 for the 9000s was all the running gear and exhaust stuff. The 6000’s are similar but some parts are different depending on the particular vehicle Ausf.), then do another bunch of steps, then the last bunch, then paint.

I admit the Imperials don’t have Tamiya’s detail but they can still be made to look decent; the biggest drawback for me is when one has the links still on the old sprues as that adds to build time. But here’s a tip: I figure out how many tracks will run along the bottom and behind schurzen and don’t spend as much time cleaning them as I will the ones exposed to view. Schurzen will hide that run and terrain effects (i.e., mud) can hide the bottom. That info is free to use; my gift to you.

This is the manifest: 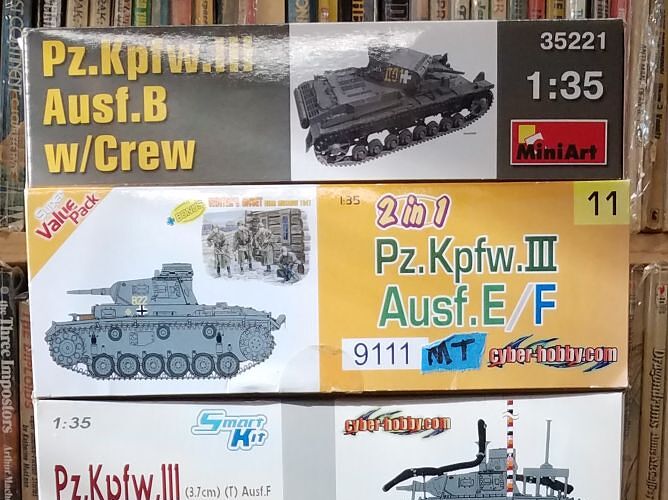 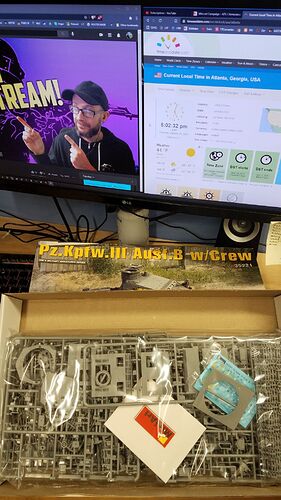 Panzer IV’s I’ve built are 6315 of course, 6043, 6001, 6150, 6746, the Jagdpanzer L/48 released under Cyber Hobby, and the mid-pro Brummbar. Other than the 6001 Nashorn being a PITA due to insufficient clearance between the track and fenders (a known issue) the rest went well enough. I have a newer replacement Nashorn now (6166). I have built Tamiya’s Pz IV D and all three Flakwagens (CMK conversion for the Ostwind), as well as Trumpeter’s Dicker Max. Dragon had the best detail of all while the Tamiyas were done fastest, of course. Trumpeter fell in between with Tamiya having the better ‘feeling’ plastic. I have three other Trumpeter kits because they are the oddballs like the Bruckenleger, Sturer Emil, and munition tender for the Karl-Gerat. Those are vehicles I don’t ever see Tamiya touching so I am glad for Trumpeter/Hobby Boss in that regard no matter their inconsistency.

My biggest complaint so far is removing the molded-on front return roller mount as I always imagine myself slipping up as I try to carefully cut it free and destroying my hand. Having to scrape off the alignment guides on the hull is annoying but no harder than removing seam lines. Attachment points are thicker than the later kits as well. I lucked out in that several at least have PE for the grills. To me, these kits are like building the 1997 Tamiya Tiger I Early Production kit, and 9011 & 9032 actually came out before Tamiya’s retooled Tiger. Tamiya is definitely the winner in terms of build ease and the rubber bands beat the indy links for speed but Dragon was starting to edge ahead in detail–just was crisp enough yet. Tamiya has improved their tracks (if you like link-n-length), improved the figures, and are starting to realize they can milk other variants out of these molds. That was the initial appeal of Dragon to me: all the available variants. How many different Pz IIIs or IV’s did Tamiya sell in 2000? How many did Dragon have? (Hint: according to Dragon there seems to have been a new one every couple of hours judging by the releases) I have 23 Pz III chassis and 24 Pz IV chassis by Dragon, but at this point I am more concerned about filling the remaining blanks in the list rather than who in particular is offering it. If it turns out Tamiya throws out a Pz III Ausf A before I can find one by anyone else…it is what it is. Is this helpful to anyone reading? I don’t know. If you want to ask about any of the particular kits in the pile I will try to answer as best as I can if I have gotten to whatever point in the construction concerns it.

All that said, if I decide to buy another copy of a particular model to try a different scheme I am looking at the new contenders showing up on the stage lately.

I hope you enjoyed the introduction to my upcoming book, “Tangents in Another’s Thread”

@brekinapez, that’s fascinating and this (from my perspective) is a wonderful line of discussion. I don’t want to thread jack @cabasner Curt inquiry so I’ll reply to you via email.