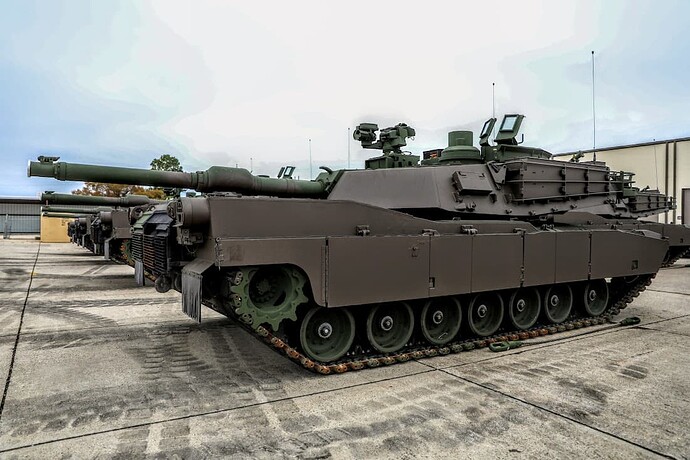 This paint was discussed on another thread, but I don’t remember where. Looks like its now being used operationally.
Ken

Question from a noob: the older SEP V3 Abrams seem to have had a fairly prominent CROWS near the commanders hatch. Whatever happened to those?

The mount is there, you can see it located in front of the commander’s hatch.
Just the weapon system itself is not installed.

As Hugo says, the mount is there, it’s just not mounted. One correction though, the version with just the CROWS is an M1A2 SEP V2.

This version is an M1A2 SEP V3. The main external differences are around the left rear where the Under Armor APU has be reinstalled, added attachment points for the armored tiles around the cargo rails and smoke launchers on the turret, the extended rear mud flaps, new tow cable ends, and larger clevis attachment points. And of course this new paint scheme.

It will be interesting to see if they stay in the new paint scheme as 3ID has traditionally had its vehicles in sand since they were regionally aligned to the Middle East.

There a few more differences. I have twice posted photos on this forum, so they’re out there if anyone is interested.
As for the paint, it has been covered as well. Someone who had claimed to have had “knowledge” of it said it was tanks being delivered to Poland, but at that time those tanks were not even ready for delivery. This scheme is indeed being operationally fielded by the US Army. The paint has some interesting attributes, as discussed in the other threads.
I think someone else other than myself has begun a build here based upon those photos. Notice how the sloped frontal armor on the turret is blunted where it meets the gun mantlet.

@HeavyArty and @18bravo are correct about the external differences on the M1A2SEPv3 with the longer rear mudflaps and the larger bow towing hooks being the most prominent features. Also as @18bravo said, notice that the gun mantlet is shrunk more into the turret face, meaning that the turret face armor has been extended outwards with an added layer of armor. Low-Profile CROWS is another indicator.

I think that this paint has better Anti-Infrared and Anti-thermal features.

It’s disappointing that SEPv3 doesn’t have a laser warning receivers (as SEPv4), but then again, perhaps it’s just high time for a new MBT instead of all these constant upgrades to keep everyone busy and that starts with having a totally newly designed turret instead of a gutted one.

The towing hooks are larger in the rear as well - just hard to see in that one photo. Even something as silly as the tow cables is another visual aid if seen from the side up close.

What is the other topic that discusses the new paint scheme. I couldnt find it under search
’

Try “Looking for an explanation…”

There’s another one out there as well.

Thanks- I was using M1A2 and Abrams in my searches. So that reminds me of the Have Glass paint on F-16s and the paint on the Raptor and lighting that looks different colors depending on the lighting and angles. That will be a pain to replicate whenever a V3 kit comes out.

Wait. I don’t see any chipping, rust stains, filters, pre-shading, tarps, rolls, backpacks, or mud. Are you sure that thing is real?

So is the Army still referring to this model as the SEP 3? I thought it was being renamed to the M1A2C.

Yes and no. It depends on who you talk to. It is being referred to as either, but M1A2 SEP v3 seems to be more prevalent.

I’m not seeing any cage armor over the turret!
Fail!

they are probably all rebuilds out of Alabama (won’t got there), but would go over them with a fine toothed comb
gary