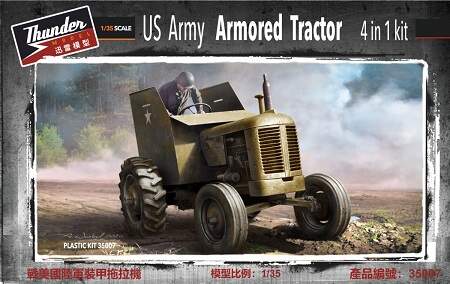 looks like an armored Ford “N-9” tractor! Lots of them still in use today
gary

LuckyModels in Hong Kong sells it and that is where I got my information.

It’s not my interest, but since some modelers were discussing 1/35 tractors and where to buy one…

I wonder what they mean by 4 in 1 kit and if the armored box can be modified.

My guess is it’s the Case VAI kit they have with added plastic for the armor. They also have a loader for the tractor. This box would be all the plastic: tractor, loader, armored tractor and armored loader.

I assembled their forklift - a lot of positive emotions! Until the end, I did not collect it - the move prevented it.
I agree with the Tank_1812 assumption.

A Ford N-9 is not a big tractor, but was one of the more common ones in the WWII era. They still make parts for them! Still it’s not going to tow a tank very well.
gary

you may be right, but I see N-9’s several times a month in the area I live in. Not much Case stuff around here, even though they build them about 150 miles west of me. A spru shot of the engine will tell it all
gary

I assembled their forklift

I didn’t know they made one, any photos to share.

I went with the easiest path as they already have one in the catalog and let Airfix rebox the kit too. Easier to add what you have and one more sprue for the armor. Not a bad little kit, just not a fan of the rubber they use for the tires. LZ Models made some resin replacements.

Would welcome another tractor to the market.

It is a Case VAI - look at the bars in the grille .
Ford bars are vertical. Plus , as others have noted , they all ready have two previous Case releases .
Heller makes a Ferguson ( foreign produced
Ford N ) but in 1/24 or 1/25 . The Ford / Ferguson relationship is quite a saga . Harry Ferguson developed the three point hitch which made it possible for a small light machine to do the work of one much larger and heavier - thus insuring the success of the Ford N series. They wound up in an ugly, huge lawsuit . I called Larry to ask him, and I’m out in left field! It’s probably a Case. He sold his N-9 about two years ago, and now has two to rebuild in his barn. That is right after he finishes his Model A Ford that he’s been working on for two years
gary

looking at the pic, I see it’s bigger than a Ford N-9.
gary