This was announced earlier on the old forums. 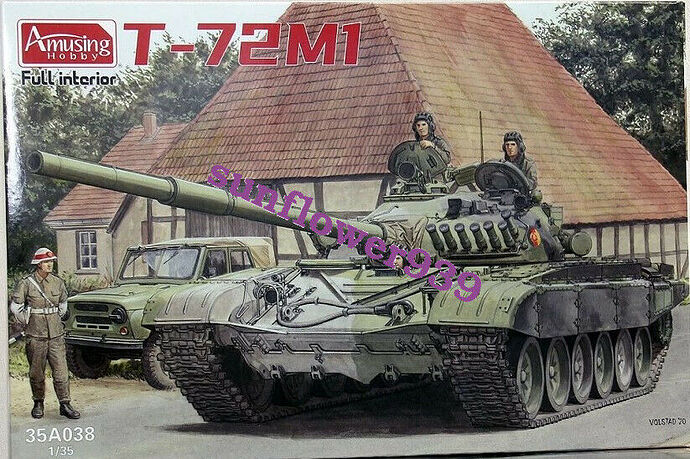 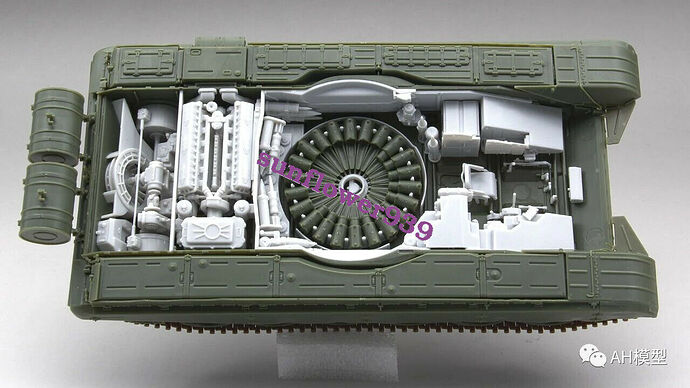 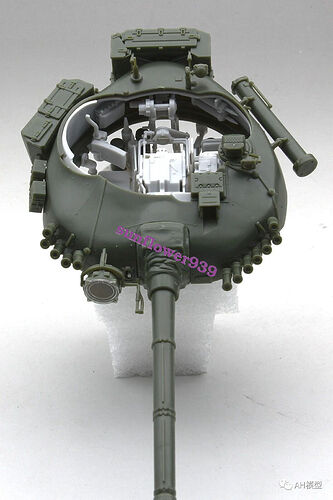 And for those who were wondering, it does come with the NVA Border Guard figure on the boxtop. 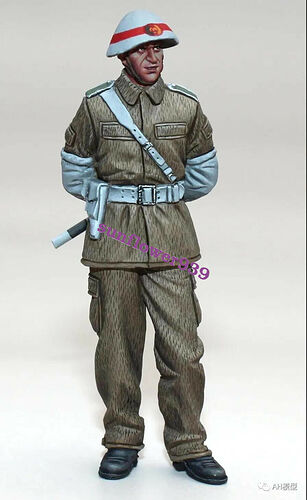 I’m wondering just how much of the interior will be actually visible once the kit is assembled.

Through the hatches, not much. It just depends on how you display it. 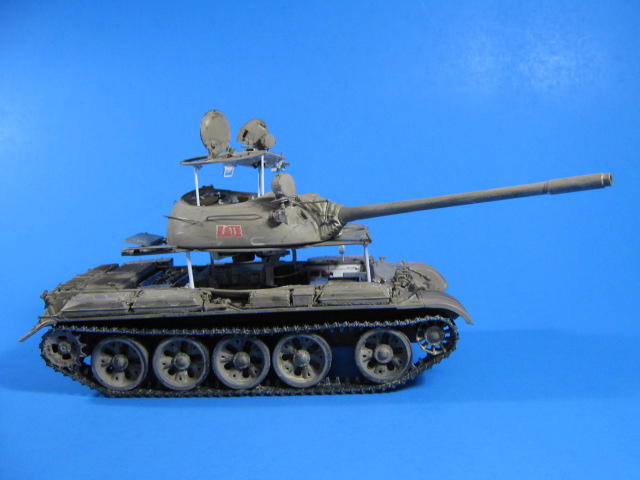 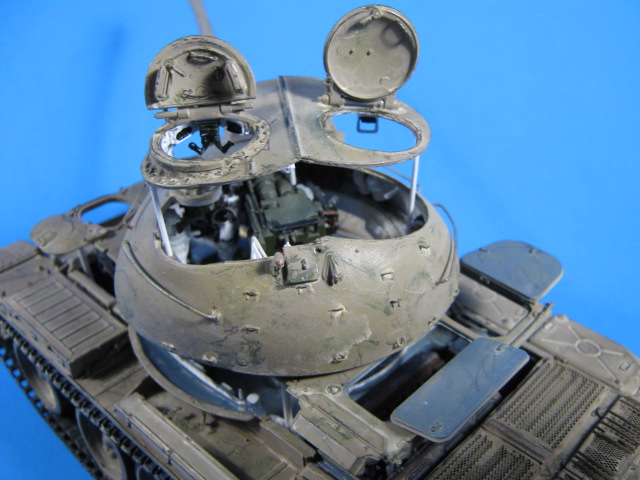 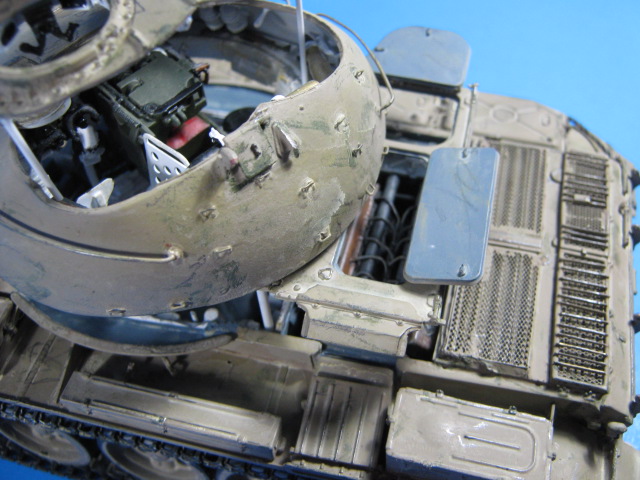 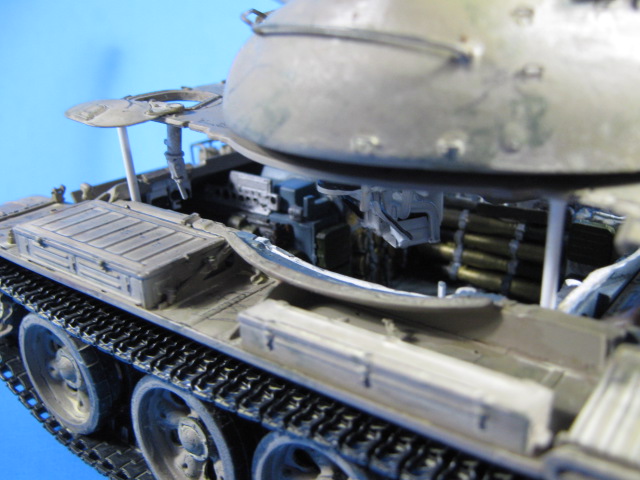 Gino P. Quintiliani shares with us a build review of the MiniArt T-55 Model 1963 with Interior kit in 1/35th scale and finishes in an interesting style..

Just to be a pedantic b**tard (as it’s in my nature) the figure is not a Border Guard but a member of the Commandant’s Service fulfilling the role of the provost function when directing military convoys etc. As we can see he’s wearing white equipment to help him stand out and has a removable cloth cover on his helmet. He carries the Soviet style traffic-directing baton.

The figure is remarkable in its finish; I have given up on trying to replicate the raindrop pattern on my 1:35 NVA figures and they consequently tend to present as amorphous brown blobs. Whoever the painter is he is obviously talented and I wish I could manage that effect.

I thought the exact same thing about the “rain drop” pattern too Brian.
Hope it’s not too expensive, definite maybe!

I have given up on trying to replicate the raindrop pattern on my 1:35 NVA figures and they consequently tend to present as amorphous brown blobs. Whoever the painter is he is obviously talented and I wish I could manage that effect.

I think I have seen 1/35 scale decals with the raindrop pattern. Not sure if it was CrossDelta…

Thanks Mario - I’ll check around - although they sound like a challenge to apply!

I hope they made a normal sized T-72M1 turret and did create another small turret like what Tamiya did with their release.

Any rumors when this might be out and how much$$$? (I’m still waiting for the Panda ZTQ 15) Also, the box art looks like it has the extra frontal armor (which I understand was not common on the NVA tanks) Also, looks like it shows the three tone Olive/Grey/ Black camo. Again, I understand to be a rarity. (One source I read stated only .5% of the NVA vehicles were repainted by Reunification. That they were repainted as they came in for major overhauls.) 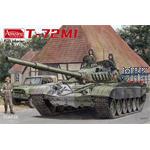 My favourite plastic pusher has it on pre-order for 50 Euro which would be around USD 60.
The regular price looks like 55 Euro so something like USD 66 - 67.

Thanks, Robin. Wonder when they will hit here, in the US (A Soviet wet dream … T72s in Amerika!) . Ordering from out of country is dodgy these days. I’d either get in time for the T72’s 100th anniversary or have to go knock some chick up so I can sell my first born to cover the shipping charges. ordered a couple kits from Canada, which is basicly the 51st state,but with a stable Govt.! … and that cost 23 euros.

Unfortunately, you can build the kit only as M, not as M1, because only the M turret but not the thickened M1 turret is included.

The figure is a very nice addition, might even be the reason to get it although I had not actually planned to get it…

Kind of an uneducated question as the only Soviet tank I’ve ever seen was a burn out near Khe Sahn. The Iraq Army under Saddam used T72 tanks, and there was one at Ft. Knox, KY. It was a grey color and looks nothing like the T72’s we often see pics of. Would this kit be a suitable start to replicate that hull?

Correction!:
I saw two T62’s setting between the runways at Wright Patterson back around 1980! Plus the Iraq tank of course, and a T34-85 just south of the DMZ that had been knocked out.
gary
gary

There are more T72 types than stars in the sky! SOviets must have made /are making about 2 dozen versions. The Iraqis did all sorts of their own upgrades (Look at the T55 inigma to see how odd they could get) . Factor in all the other countries that have them and rebuild/update/tweek them …

I suspect an aftermarket turret for an M1 turret is probably in the works by someone. This would be an interesting project for a good 3D printer.

I
got a notice from Hobbysearh 1999 today. They are taking pre orders. Price was $67, I think.