ICM has released their 2021 Catalog and inside is a very welcomed surprise. They have announced what looks to be two, maybe three, new-tooled AH-1G Cobras in 1/32 scale. A new Cobra model has been sought after for many years. The 1970s-era Monogram/Revell version has grown long in the teeth. Hopefully these will be very nice. 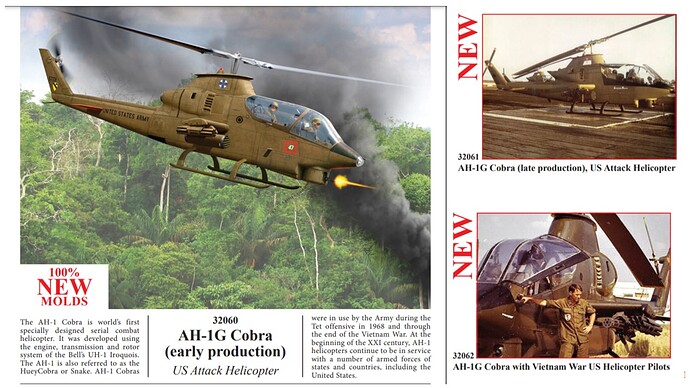 They have also announced the pilots as a separate set: 1/32 US Helicopter Pilots (Vietnam War) to go with them. 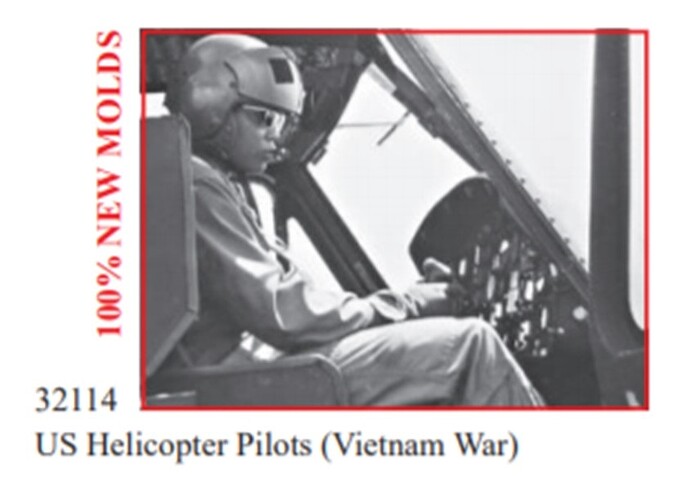 The full catalog can be seen here.

Pleasing news but I would be more enthusiastic if it were 1/35.

Brilliant news but as said 1/35th would have been better but hey I’m not gonna complain. Still waiting for Kittyhawks 1:35th UH1’s… has seemed like a lifetime. ICM are quicker at releasing things once announced.

I can remember the very first time I saw one. On an OP with the 101st, and they were working on the north face of the Que Son Valley near West. Kinda neat, but something was a miss. They didn’t hover well when making a gun run (or rocket). Still nothing that an AC130 or AC119 couldn’t do better. They did have the advantage of being able to operate out of FOB’s, but never did. Top said it was just some kind of a new gadget. On the other hand a generic Huey with miniguns and rocket pods could simple set still in the air and light up the place. The next generation Cobra was a different animal, and that was what was needed.
gary

1/32 was actually the original scale for large scale helos. One of the first was the ICM Bell Jet Ranger in the mid-1960s; the actual date has been lost to history.

The 1/32 military helo trend was continued by Revell when they bought the ICM Jet Ranger and repackaged it as an OH-58A in 1986. 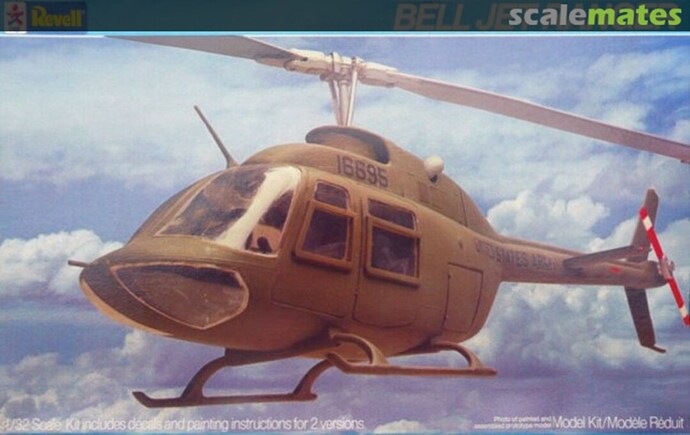 Revell has continued with 1/32 helo models and has a lot of them available. They are mostly of European design though. 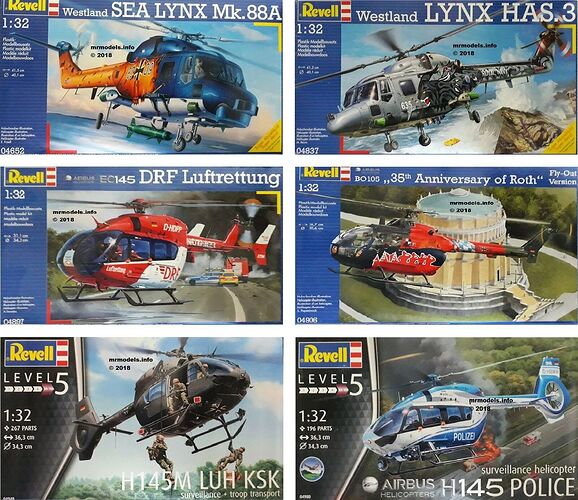 The very first 1/35th helicopter model was the Heller SA321 from 1975. It was a one-off in 1/35 at the time though. It was actually a pretty good model; well detailed and nicely molded. 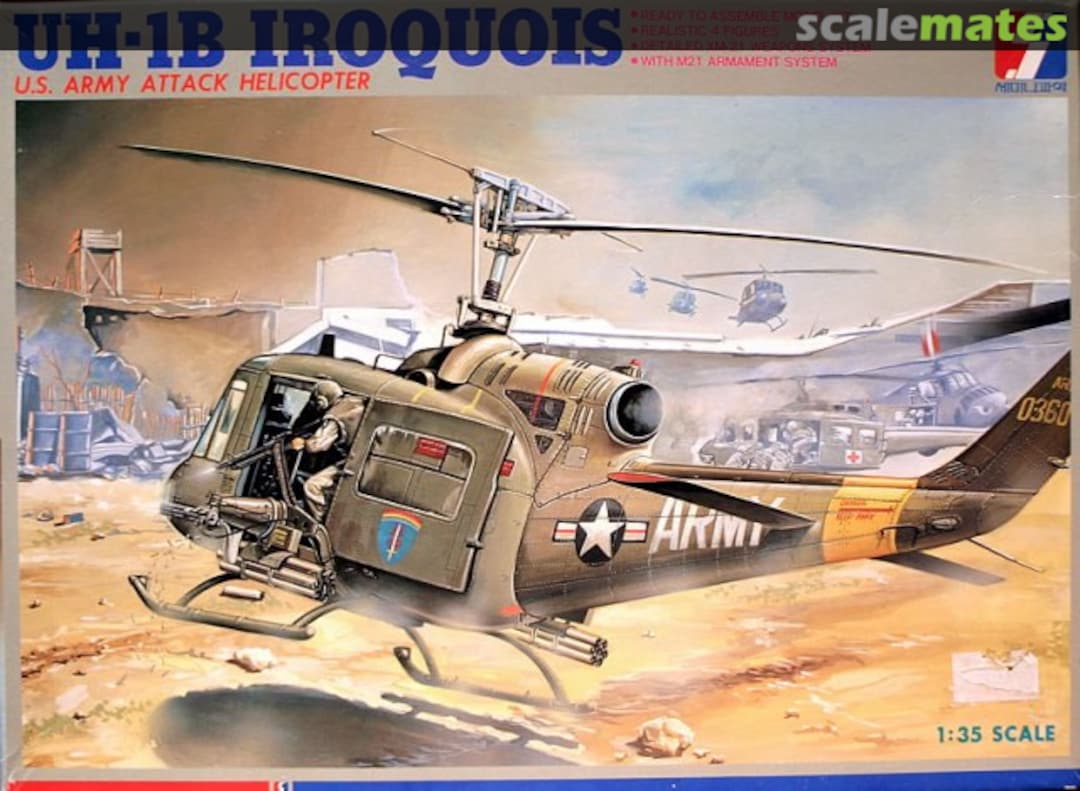 After these two kits were very successful, others jumped on the band wagon to include Dragon, Trumpeter, Panda, Kitty Hawk, etc…

Now 1/35 is pretty much the standard scale for military helicopters so they go well with all the 1/35 ground vehicles, figures, and accessories.

The difference between the two scales is relatively small, sort of. 1/32 is 9.143% larger than 1/35. You can use the two scales together as long as constant-sized items such as weapons, canteens, ammo pouches, etc. are all the same scale. I have used 1/35 pilots, soldiers, and gear with 1/32 helicopters in the past. They look fine together. If you go the other way though, 1/32 figures with 1/35 helicopters or vehicles, it doesn’t work as well since the figures are too big, almost 10% larger.

I was excited when I saw the headline but I think I’ll pass on it being it’s 1/32. Rotary wing just lends itself to 1/35.

You can use the two scales together as long as constant-sized items such as weapons, canteens, ammo pouches, etc. are all the same scale. I have used 1/35 pilots, soldiers, and gear with 1/32 helicopters in the past.

I mix scales quite a lot with no problem. I even built a Revell AH-1Q using parts from the Academy AH-1W kit. Came out great. Also, the Revell AH-1 kit goes back to about 1969. But a new tool kit is long in coming, looking forward to it.
Ken.

Neat walk down the memory lane. My first helo was Revell’s 1/32 Huey, the one attacking the bridge, c.1968 or later. It was so cool I immediately built the 1/32 Cobra. Vietnam was on the TV every night so plenty of Hueys but I don’t think I’d ever heard of the Cobra, so it was fascinating. I don’t recall building a second one until about 45 years later in 2016 when I built one for a friend’s friend’s dad, who flew one with the 2d Bn, 20th Aerial Rocket Artillery, 1st CAV Div. 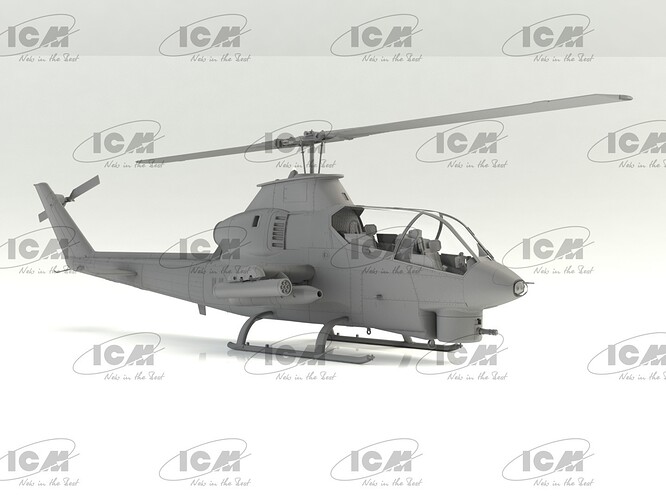 ICM is showing the CAD renders for their new AH-1G Cobra (Early) kit #32060. The kit is expected out by May. It looks like it will be really nice.

Some more CAD sprue shots are being shown by ICM. 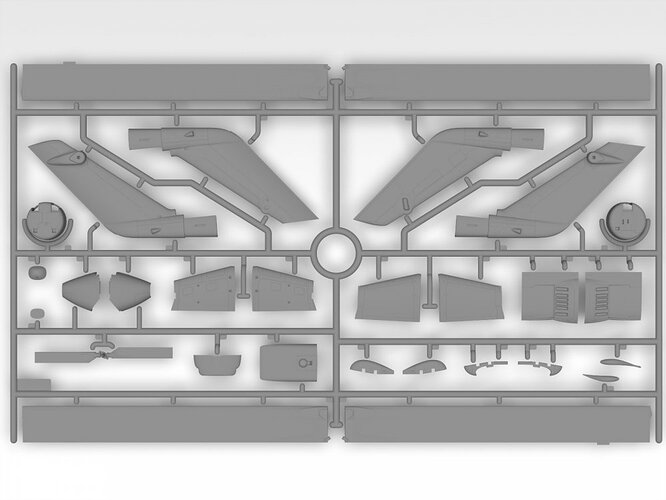 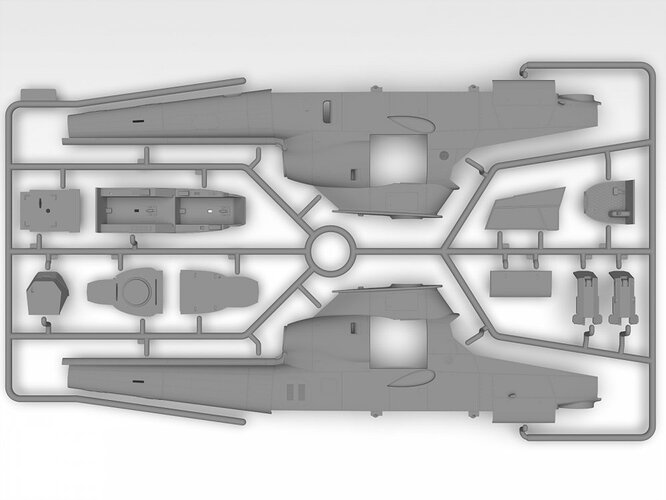 The CAD looks pretty good. I like the idea of having both left and right hand tail rotor parts so you can build either from one kit. It looks like it will have late and early rotor blades (with and without trim tab) in the same kit too. Two types of turrets are visible as well; one and two weapon positions. 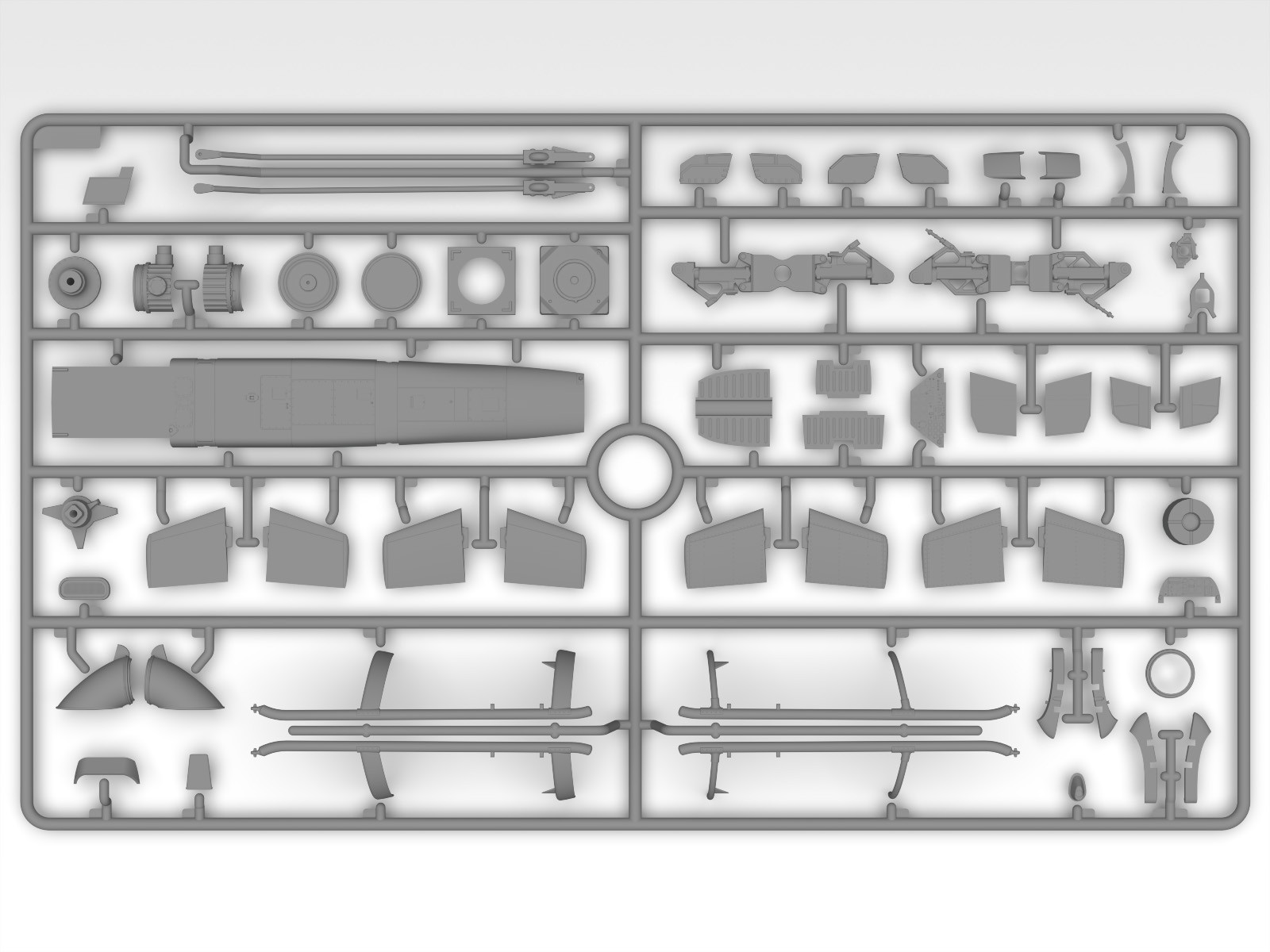 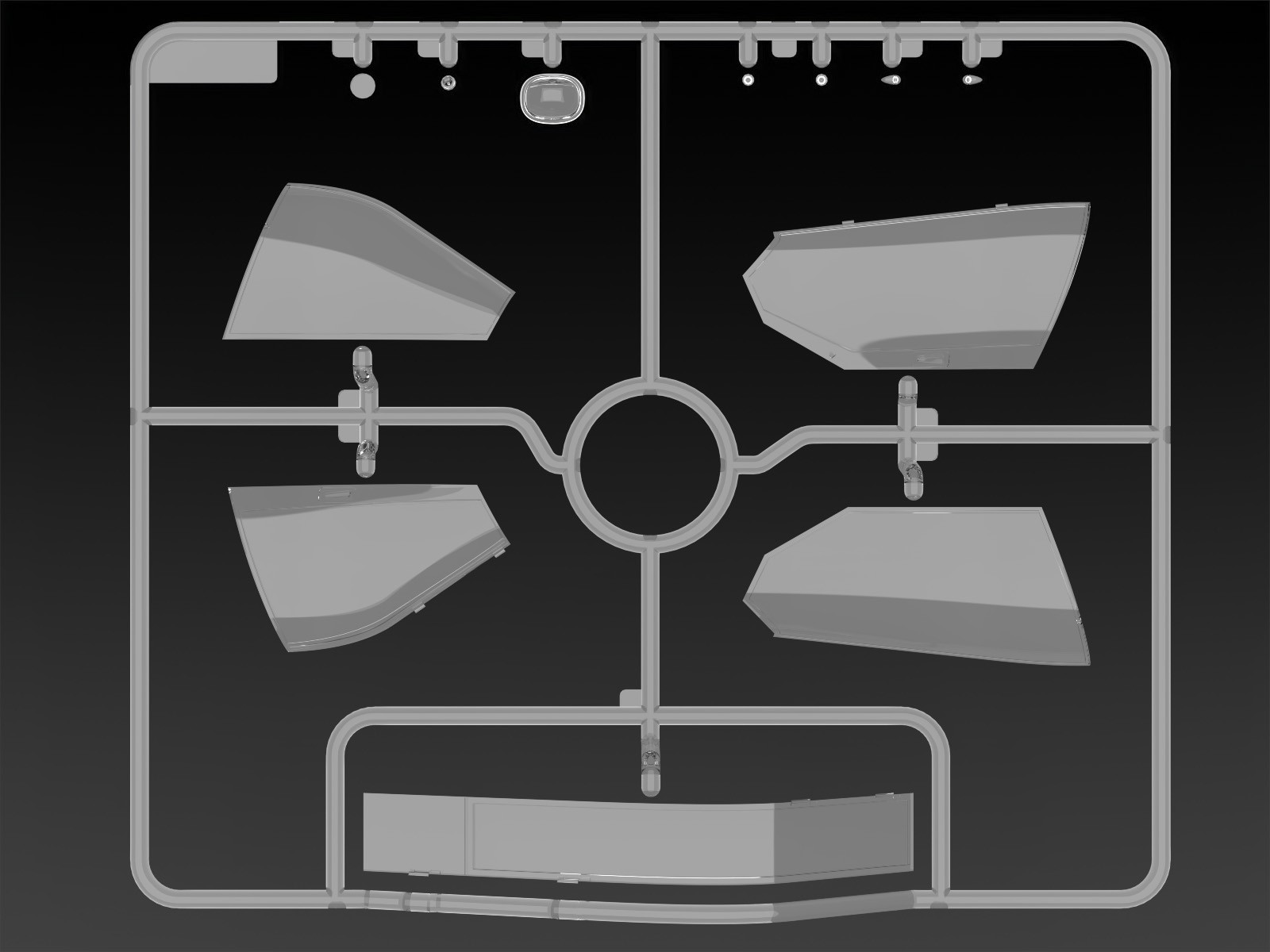 Lots of extra weapons options for future versions too. The TOW missiles may mean a late model S or F is in the works too. One can only hope. 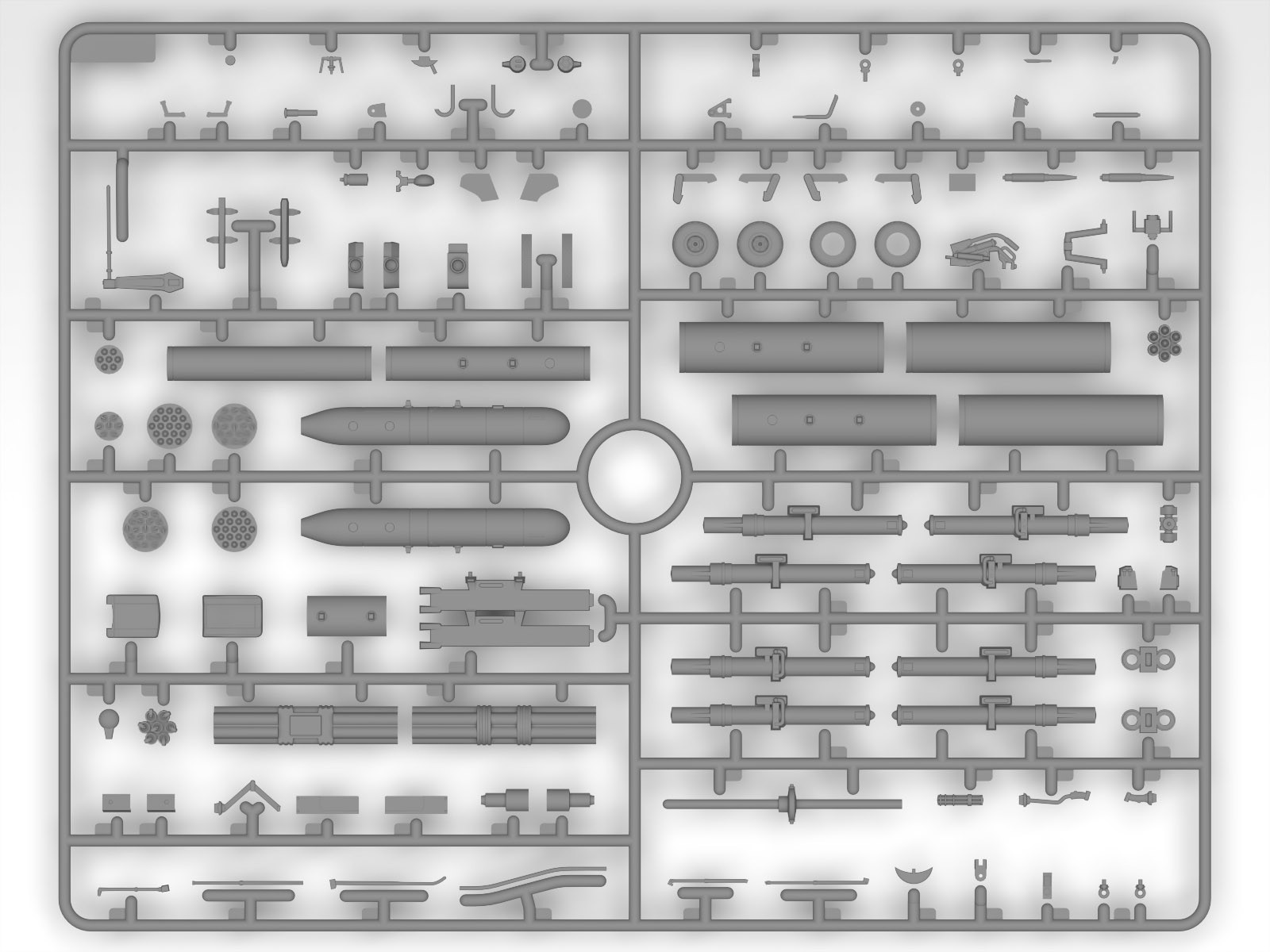 The AH-1G (Early) kit is announced as a May release by ICM. It should be available soon. They are now showing the box art and decal sheet as well. 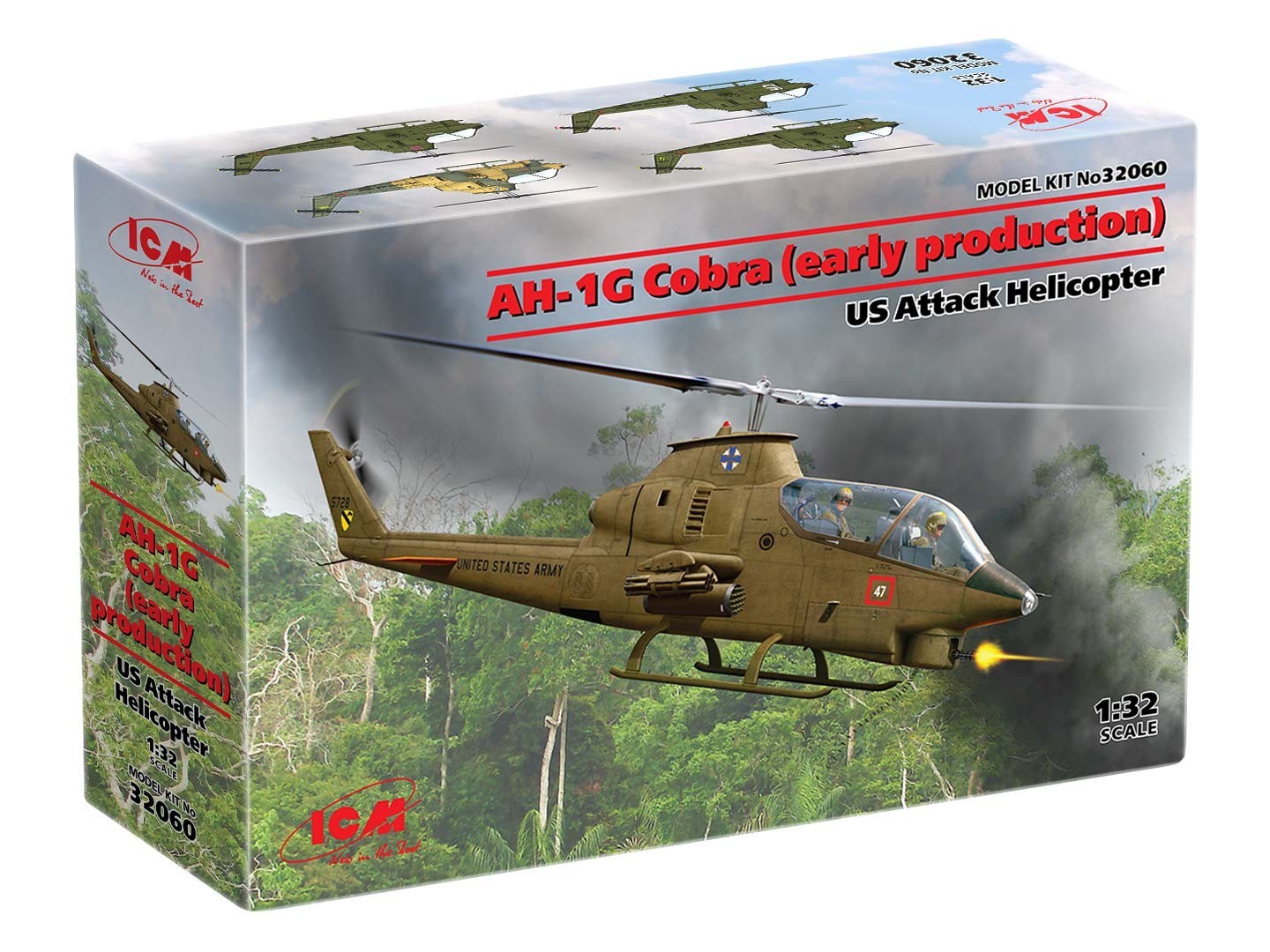 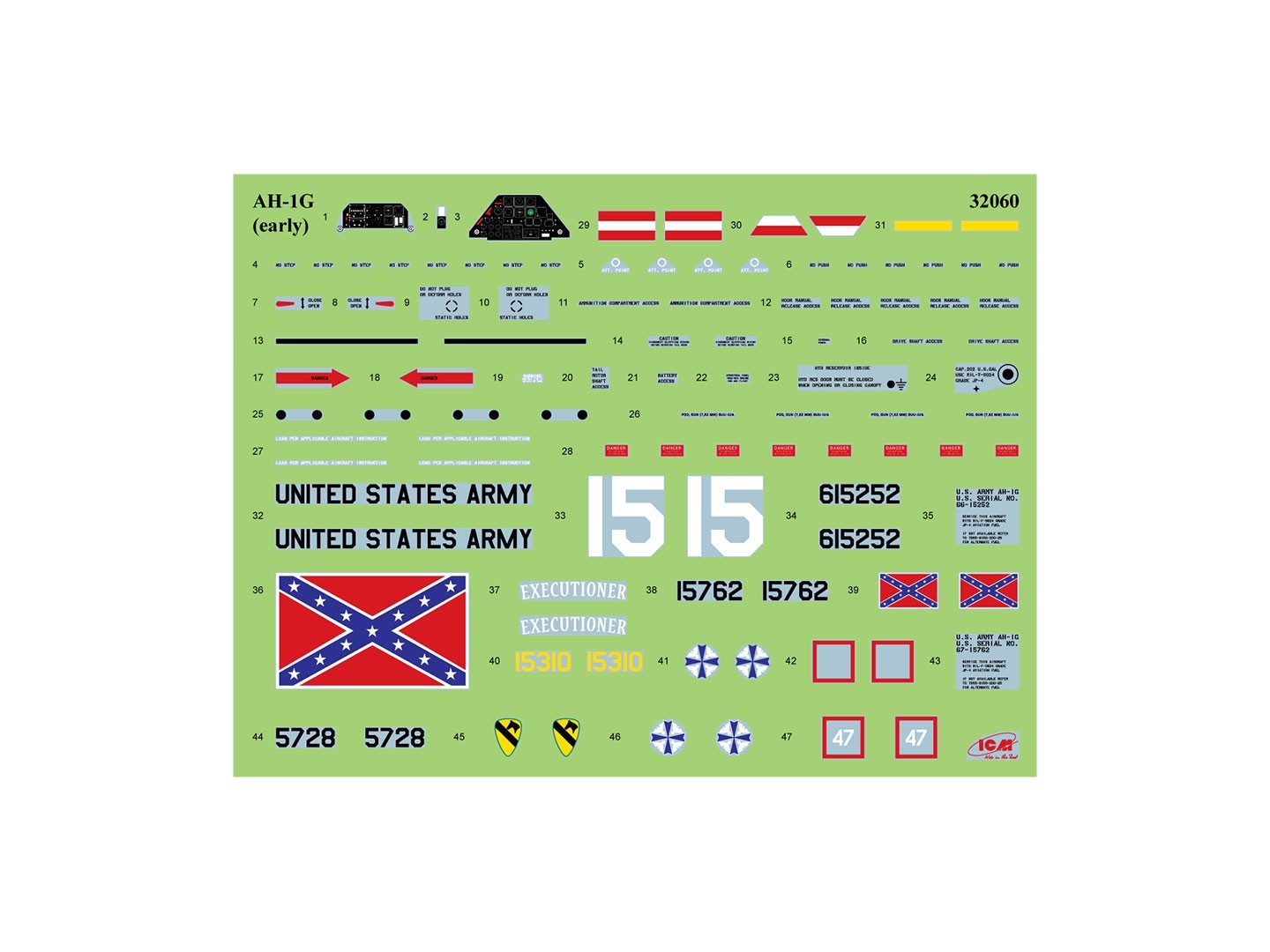 Sprue shots etc, on their news story this morning on AeroScale.

ICM have released the following new kits for May of 2021.

Looks like they are already showing up on eBay, direct from Ukraine.

ICM has announced the Late Model AH-1G is also in process now. It should be nice as well. Most of the parts for it are already on the early sprues shown above. It includes the later "toilet bowl " exhaust deflector and 20mm cannon mount. It should be an easy update and hopefully available soon. 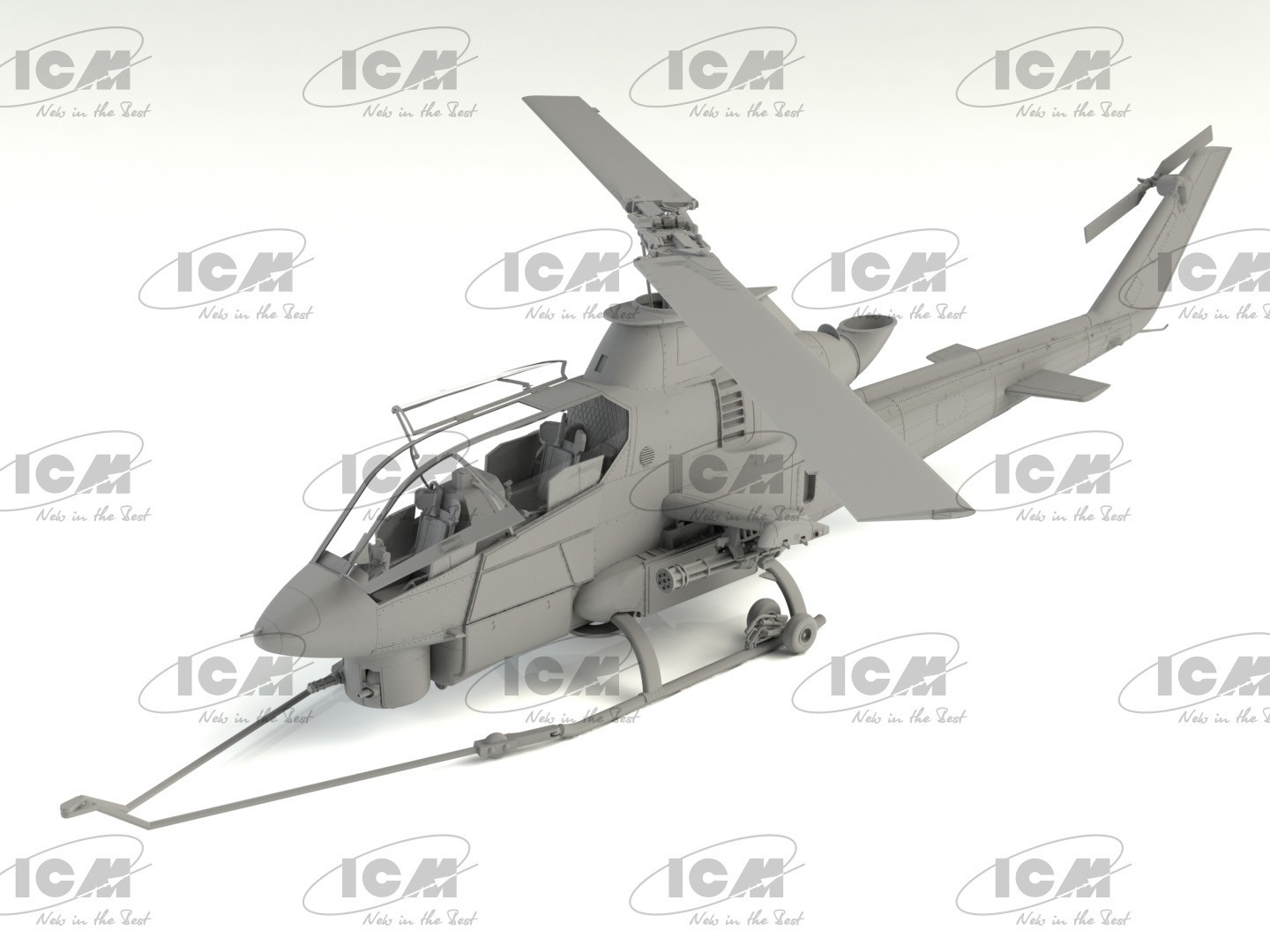 Good day to everyone, great news! We are working on a new kit, take a look on photos of renders. 😉

A couple of initial reviews of the kit from another site. It sounds like it is a great kit. Both of the individuals below were US Army Cobra pilots; Rob in Vietnam ('69-'70), Floyd during the Cold War ('80s -'90s).

Rob Mignard -
I received the new ICM Cobra today. There’s a lot to be happy with here. It completely eclipses the old Revell kit (but don’t throw it away just yet). Overall, it looks great in the box. The shape appears to be right on (even the nose is correct; something we haven’t seen in some other Cobra models). Parts are included for both early and late G models. Both vertical stabilizers are provided. Weapons include XM-157, XM-158, XM-200 rocket pods, XM-18 minigun pods, and Tow missile tubes. The M-35 Vulcan is not included. The canopy is great; clear, thin and distortion free. Both clear and solid nose caps are provided. Decals are provided for the instrument panels (not my favorite way to do this). The cockpit interior is sparse and will need some extra detailing. The transmission area is provided, but no engine. The transmission doors are correct, but don’t have much detail on the interior. The only error I saw on the instructions directs the modeler to use the flush riveted synchronized elevators. Early G models had pop riveted sync elevators (parts C 37, 38, 39, and 40). The plastic is the typical ICM (soft) plastic.

I do have a few disappointments specific to Viet Nam Cobras, most are easy to fix:

I flew in the Central Highlands (II Corps) in 1969 and 1970. All of the Cobra photos I took have blue canopies and don’t have the ECS inlet. Many of them still had the clear plastic nose, but the twin lights had been removed and the single landing light installed on the belly. I don’t know when Bell switched to clear canopies, but it was well into the production run. If you look through John Brennan’s Helicopter Art/Nose Art books (which are excellent and highly recommended) you’ll see that about half the Cobras have blue canopies. The ECS units were retrofitted, but it was after I left. Also, The VHF Collins antenna was located inside the doghouse during this period; later moved to the underside of the tailboom as depicted in the kit.

The main point is: carefully study the data you have; they were continually changed and upgraded during their Vietnam service.

After building the ICM 0-2A, I’m concerned that the skids may not hold the model up; especially if you use the non-faired set. Don’t know that it will be an issue; just worried.

If you’ve got the Revell kit, you have a good start on an engine if you’re so inclined.

Overall, this is a very good kit. After several attempts to build the Revell kit; I’m really looking forward to building this kit.

Floyd Werner -
I got mine and started it yesterday. So far the fit is phenomenal. So far. The shapes looks great.

-The IR strakes that you are talking about below the exhaust are there. They are separate pieces.

-As for the blue tinted canopies and the lack of ECU inlet in the doghouse, they were only on the very first models. It was quickly changed to clear and the Enviromental Control Unit (ECU) was added (thank God).

-I didn’t notice that the sand shields were missing. I’ll have to repair that with some Werner’s Wings parts.

-I didn’t have an issue with the XM-158 pods…yet. I will see how they build up. I’m sure they aren’t as nice as Fireball Modelworks ones were. We’ll see how they look built up though.

My initial impressions are WOW! Significantly superior to the old Revell kit in every aspect. The kit has raised rivets. That is a nice touch. The instructions are easy to follow and understand. The amount of detail is great. Would I have preferred to have an engine too? Yes but the transmission is impressive. It does look like the gun sight in the back seat is missing the glass. Easy enough to fix. A CAD piece would be nicer. Both style of tailbooms, left and right handed, are provided. That is nice. Love the nose piece and the option of the cap. The belly panel is beautiful, something completely missing on the Revell kit. Both turrets are provided which is very nice. The M-28 turret allows for multiple options, twin minigun, or the usual set up of minigun and 40mm grenade launcher. The inclusion of both vertical fin caps is nice as well. The option of opening the transmission doors is a welcome addition. I love that they have the canopy in five pieces, plus the ability to have them open with support struts. So nice to have that option. Having the rotor blades in two parts is surprising to me. I love that the wings have the jettison actuators on them. Having the ground handling wheels and tow bar is a nice touch. The ability to have all the armament options on the wings is nice as well. Plus they give you a loadout option chart. Very nice. Having the masks designs in the back is nice. Hopefully Eduard will do a set of masks. The decals are nice and look in register.

Down side- As I mentioned the pilot’s gunsight XM-73, does not have the glass portion of the site. It needs a resin replacement. The transmission doors have a strange pattern in them that is a little pronounced. Its on the real thing just not as pronounced. A little bit of sanding should take care of that though. These are the only thing that I’m not keen on. The rest looks perfect. Decal options are not very inspiring. The Cobra had some very colorful markings, including full color shark mouths. Is there room for resin upgrades? Absolutely.

Unadvertised features- The parts are included in this kit to do a ‘late’ version AH-1G. It has the Anti-Strella toilet bowl exhaust system, the right side tail rotor and unfaired skids.

You can tell that they are going to do a later variant like the AH-1S (Mod), because there are TOW missiles on the sprue but not used. Plus the nose cone is a separate piece. Can’t wait for that one too.