Paracel figures out of Vietnam has announced a few sets of resin figures to fill out your 1/35 Vietnam era Hueys. These include a full crew and airborne infantry figures to put coming out of your helo. 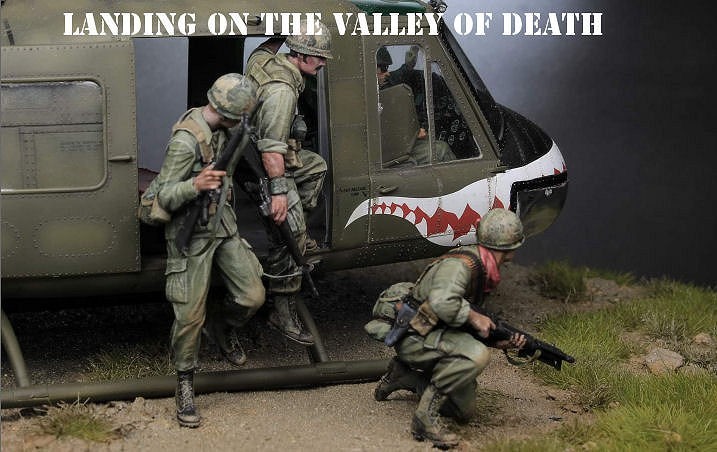 They look really nice, but they made the same mistake (in my opinion) that Dragon did. The Door Gunners set comes with one figure meant to hold an M60D on an M23 doorgun mount (left). The other figure is carrying a free M60A that would be hung in the door frame by a bungie or surgical tubing, usually on B and C model gunships. Pretty much all UH-1D and H model slicks (after about '65) mounted the M23 Doorgun mount on both sides. So in order to have two slick doorgunners, you need two sets. 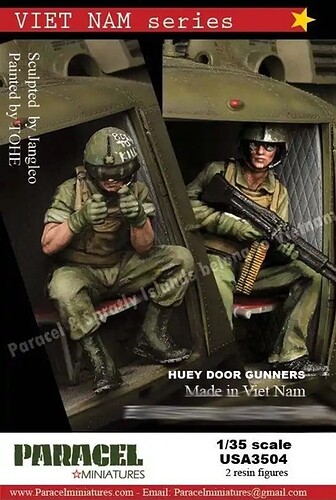 @HeavyArty thanks for posting this, the figures look great but the squatting M60 gunner really needs belts of ammo hanging from him, I realise that isn’t always possible when creating figures and PE options never look right for mr.

what i would like to see is a load of figures sitting with their feet dangling out of the doorway, it’s an iconic image of Hueys goung into combat, at least for me.

I guess the Seminar Huey in my stash is nothing to look forward to building.

what about those old MRC/Academy 1/35 Huey gunships, could they be converted into slicks?

Anything is possible if the spirit and flesh are willing.

you are correct about your reference to the M23 mount. The bungie cord was not all that common from 67 onwards. What I noticed was the men look more like they are boarding rather than departing. You always depart from both sides, and of course you’re loaded down pretty good.

Nobody caught the jungle boots on the door gunners? They’d had to buy them as they were not issued to helo crews.
gary

wrap the figured with three or four belts of 7.62 ball. The M60 guy will have an extra barrel, and a 30 round segment of a belt hanging on the gun. Two bottles of water are a must. Then there is the usual stuff. Grenades, plus a couple smoke grenades. Flares, knives, claymores come to mind. A lot of squads used a “drag bag” pulled off the floor by the last guy out the door.
gary

@Gary_Totty I’m curious about the drag bag and it’s contents, how big was it?

I’ve never heard of it in all my years of reading about the Vietnam War.

I guess the Seminar Huey in my stash is nothing to look forward to building.

The 1/35 Seminar B model Gunship is pretty good. It is about on par with the Academy C model, but a little less fine details. Both will build into nice models.

What about those old MRC/Academy 1/35 Huey gunships, could they be converted into slicks?

They could be very early UH-1C slicks by leaving all the weapons off. It was not common though as the UH-1C was originally designed as a gunship. They are quite good and build up well.

I don’t think making you buy two sets for a complete crew is a mistake - I think it’s marketing.

we just used an Army issue duffle bag with a piece of rope tied to it. In it were some medical supplies (we had no medic), two cans of 5.56, and a can of 7.62. A couple big plastic jugs of water, and about forty feet of paracord. A new radio battery (total of two extras), a new M60 barrel with the mitten taped around it. A couple red and green star cluster flares. Sometimes two or three claymore mines. After all that stuff was dumped in the bag we’d empty C-rat cartons and just dump the contents in there to take up space. It’s just heavy stuff that you might just need (water for sure).

You plan on being on a hill top for twelve to 16 hours max, and you kinda gear up for twelve hours. Vast majority of the time nothing happens, but when it does you’ll be glad you brought that extra junk. I’ve had twelve hours stretch out to nearly three days a couple times. I could go three days without food with no issues, but four hours was about it for water in 115 degree heat.
gary

The set is “The Tourists”. They come in one big set (11 figures) or two smaller sets of 5 each (no truck driver). 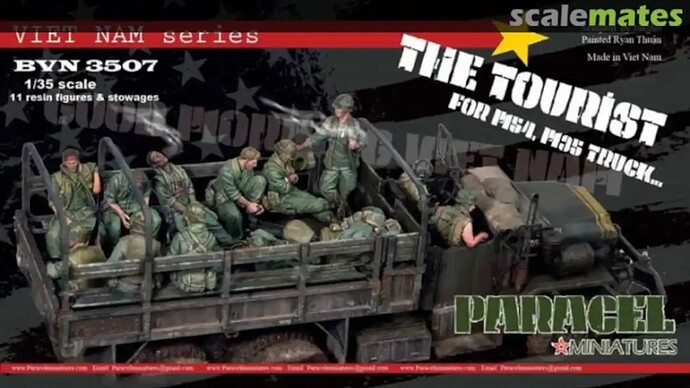 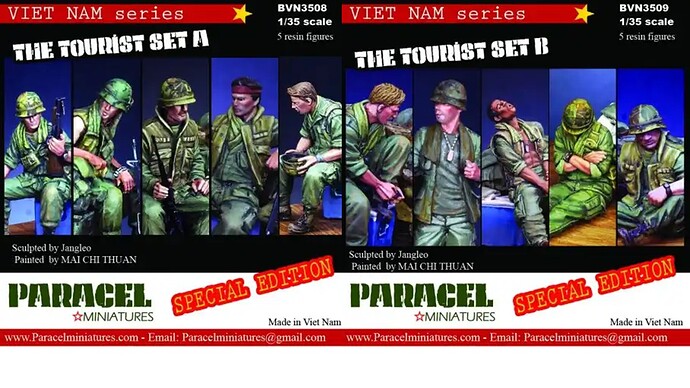 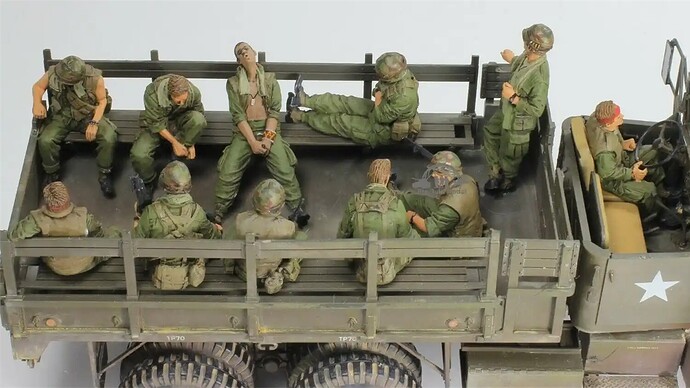 Here are some of them in a Huey, not mine, but they do look the part. 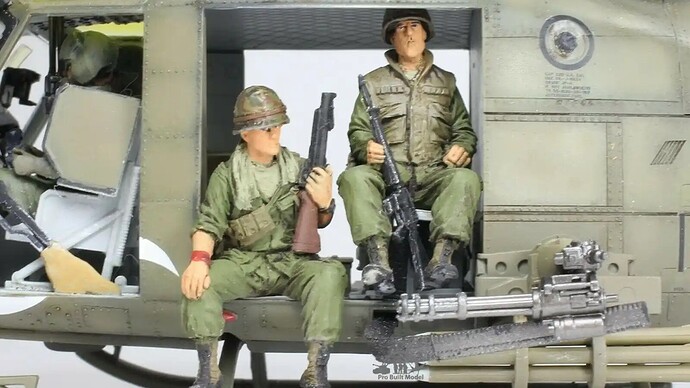 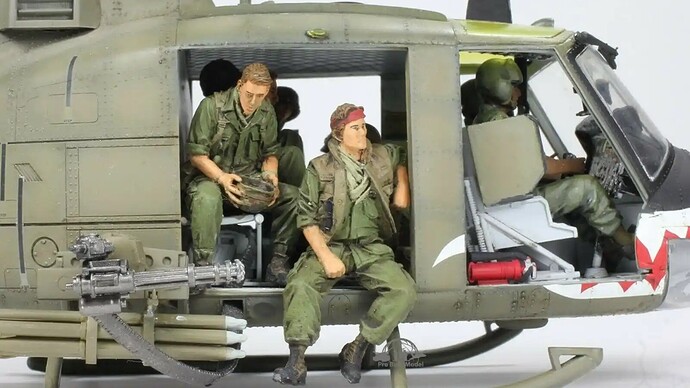 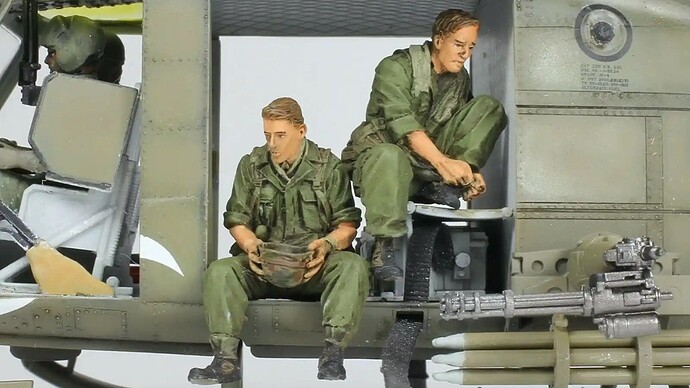 I agree you did not see M60D and free 60 (bungee) on the same ship. Don’t think I ever saw a free 60 on a D or H model. Anyway, I can only comment on the unit I was in in 1970, we never wore jungle boots or rolled up sleeves on flights. SOP was Nomex uniforms, sleeves rolled down, and standard leather boots. Jungle boots would melt if there was a fire.

if by some chance you were to go down in anykind of a chopper, fire is number one. A roll over is number two. I went down five times, and after the first two the only thought was to get your butt outta that thing!

In the year of 68, they’d offer you the sun and moon with a naked leggy red head to be a door gunner! Most were guys simply trying to find an easier way out of the bush. Most had little if any real combat training behind the M60, and couldn’t hit squat. More than once I pushed the door gunner to the side and took his place behind the 60. Army pilots were good, but didn’t like to get their hands dirty. I’d be the same way I guess. They had very poor training on what to do when things went south (really OJT was it).
You could almost always pick out a chopper crew on the ground. They had their aviator sun glasses, spit shined black boots and tailored BDU’s. I’ve seen them in tiger stripes, as if that was gonna help much! If they made it to the six month mark they were pretty good (by then).

Re: the seats in the cargo area, we often flew without them. Made loading/unloading easier. Saw ships configured both ways. As I noted in earlier post, this was 1970 in III Corps area, H models, can’t comment on what was done prior years.

most slicks had the fold down bench removed up my way. It was just something to get in the way. Keep in mind that it was a long trip out by the fence from the coast line. By the time you got there you were short on fuel, and there were few places to refuel. Most of the time it was a Chinook or an H34 as they had the legs to get there and back.
gary