This has been published before, but I thought I’d share a piece on a simple Noah’s Ark build I did many years ago for those of you who may not have seen it. 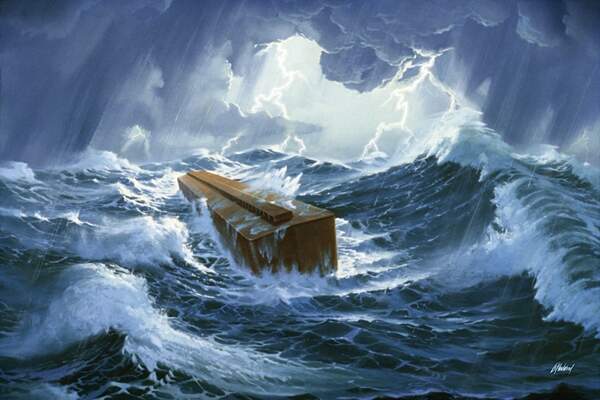 Some years ago as an undergraduate at UC Berkeley I found myself enrolled in an ancient Mesopotamian literature class. As a History major it wasn’t my first choice, but the class was reputed to be easy and reading those wild old Sumerian, Akkadian, Babylonian, and Hebrew stories sounded like it might be a kick. Unfortunately, it was also one of those innovative classes where you couldn’t get by just attending the lectures, reading the assigned materials, writing term papers and passing the exams… you actually had to do some sort of “creative” final project as well. As the end of the term neared, the dreaded presentations began: some of my classmates made cuneiform inscribed clay tablets (Literature majors, of course); some fratboys in the class concocted some positively vile (but, they assured us, authentic) Sumerian beer. One truly frightening person even composed—and performed— a series of Assyrian style magical spells, incantations, and curses (it was, after all, Berkeley!) Everyone seemed to have ideas, and they were all so damned creative! But me? My approach to the problem had been to think about it as little as possible until, as the end of the semester inexorably approached, the awful realization came that I had to put something together fast.

During the course of the term I had been fascinated by the numerous versions of the story of the Great Flood, and of course as a ship modeler I was particularly intrigued by the Ark. Was such a vessel really possible? What might it have looked like? With no other ideas, a looming deadline and the prospect of academic probation to motivate me, I re-read the Sumerian Deluge Myth, Akkadian Epic of Gilgamesh, Babylonian Atra Hasis Epic, and the Hebrew Flood story from the book of Genesis.

Each account provided its own interesting perspectives including details of construction, interior structure, launching of the craft and the like. The best known version is the one found in the ancient Hebrew book of Genesis, which also provided the most detailed specifications of the actual vessel:

“…And God said unto Noah, Make thee an Ark of Gopher wood: rooms shalt thou make in the Ark, and shalt pitch it within and without with pitch. And this is the fashion which thou shalt make it of: The length of the Ark shall be three hundred cubits, the breadth of it fifty cubits and the height of it thirty cubits. A window thou shalt make in the Ark, and in a cubit shalt thou finish it above; and the door of the Ark shalt thou set in the side thereof; with lower, second, and third stories shalt thou make it.” (Genesis 6:14-16).

Given 18 inch “cubits” (a standard ancient measure representing the approximate distance from the average man’s elbow to his fingertip), the biblical Ark would have been about 450 feet long, 75 feet wide, and 45 feet high. It had three interior decks, a door on the side, and some sort of window topside, with the whole wooden structure sealed with pitch. 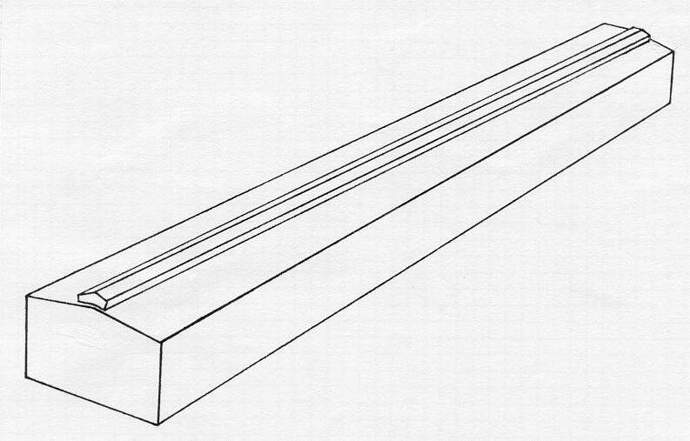 Aside from a few cutesy children’s toys, there were no kits available for this one. Now I’m no scratchbuilder, but this was a pretty simple project and I was under the gun… so I figured I’d give it a go. In part because of my limited scratchbuilding skills and because I had to get this thing completed over a single weekend, I opted for a very simple layout with flat surfaces and gentle slopes. I reasoned that the unpowered vessel would probably have resembled a barge rather than a seagoing ship. In fact, the ancient Hebrew word for the Ark, תֵּבָה (tebah), does not even mean “boat” or “ship”. It is etymologically related to the Egyptian word db’at, meaning “box” or “chest” or even “coffin”, suggesting a squarish, barge-like craft. (Interestingly, the word is only used one other place in the Bible, to describe the casket in which the infant Moses was cast adrift in the Nile.) Also, the 4,700 year old Akkadian Epic of Gilgamesh (Tablet IX, line 59) and the Babylonian version of Atra Hasis (Tablet III, lines 25-6) both refer to the Ark’s “square decks”. Finally, ancient Mesopotamian traditions held that Ziusudra, Atrahasis, and Utnapishtim (the Sumerian, Akkadian, and Babylonian “Noahs”) came from the city of Shurrupak on the Euphrates River, so a river barge-type design would have been a natural. 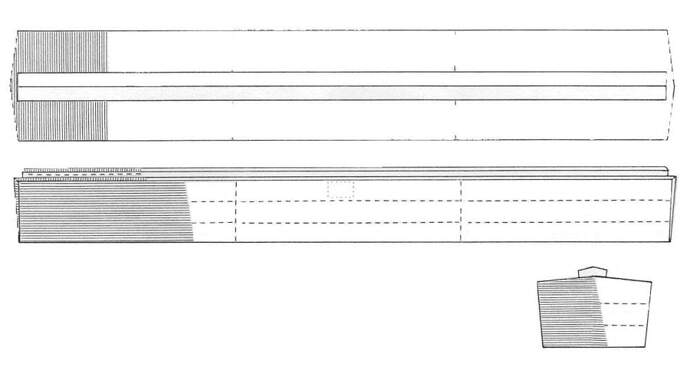 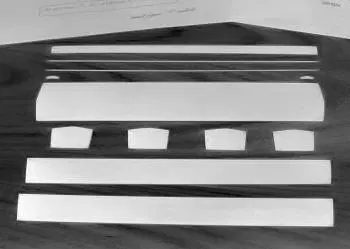 I made some quick 1/700 scale measurements and set to work cutting the pieces out of plastic sheet. Evergreen .040 inch thick v-groove siding with .030 inch spaced grooves (product #4030) served for the hull, and the roof parts came from .030 inch thick passenger car siding with .025 inch grooves (product #3025). I like the easy to work Evergreen plastic, and the mass of delicate grooves on the sheets would nicely simulate the wooden construction of the vessel.

Assembly began with bending the roof downward along its centerline over a straight edge to fit over the peaks of the bow and stern parts. These I cemented into place after having similarly bent them to fit the curves at the ends of the roof. Two interior bulkheads made from the .040 inch hull material were included for added rigidity. To my surprise, these showed through the roof after the cement had dried. The cement applied to the thick bulkhead edges had slightly distorted the thinner material of the roof. Still faintly visible on the exterior of the completed model after painting, they subtly suggest an inner structure. A happy accident! 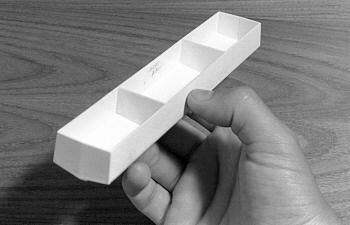 According to Genesis 6:16, “A sohar thou shalt make to the Ark and in a cubit thou shalt finish it above…” The obscure ancient Hebrew word sohar is traditionally rendered as “window”. A window usually means an aperture in a structure, but the sohar is “above” the main structure by one cubit. For this to be so, the opening would have to be part of a separate section elevated above the main roof. I reasoned that the sohar must have been this structure with ventilation openings rather than a window as such. This would also explain the Babylonian account’s “…let it be roofed over above and below” (Atra Hasis Tablet III, line 31), “so that the sun shall not see inside it”, which apparently distinguishes the roof of the sohar above from the vessel’s main roof below it.

The roof of the sohar was cut and formed just like the roof of the hull, the sides fashioned from Evergreen HO scale ladder kit parts (product #201), which came precut with small rectangular notches. When attached beneath the sohar roof these notches became uniform rectangular vents running the length of the ship, providing a nice see-through effect when viewed from directly abeam. This all may sound complicated, but it took only a single afternoon to cut out and cobble together these twelve simple parts!

Painting was even easier than the construction. According to the Bible, the Ark was sealed “…within and without with pitch” (Gen 6:14). In the Epic of Gilgamesh, “the little children [carr]ied bitumen…six sars of asphalt I also poured inside…” (Tablets XI, lines 54 and 66), and the Atra Hasis narrative says, “…let the pitch be tough and so give (the vessel) strength” (Tablet III, line 33). It would have been most reasonable to paint the Ark gloss black overall, but I opted instead to paint it a “Gopher wood” brown (otherwise known as Tamiya acrylic flat brown XF-10) with the seams “caulked” in a black enamel wash to give the model a more wooden appearance. A light drybrushing of lightened base color and a misting of gloss varnish to give the ship a slightly wet look completed my little weekend wonder.

Since I was on track with my timetable I took the extra step of making a heavy, rolling sea out of drywall spackle on an old trophy plaque to add interest to the very plain looking model. The water was painted with a simple blend of Testors Non-Specular Sea Blue (FS 35042) and white. The vessel was heeled over just a bit with the lower one-third trimmed away to give it a natural looking “sit” in the swells.

There it was, quick and easy. Like the original, my Ark was a no-frills project built on a strict timeline to avoid a catastrophe. Although speculative, I figured my interpretation was reasonable enough based on the ancient literary evidence. Anyway, who’s to say I got it wrong? At least my professor approved it, and that was good enough for me!

Tim,
Once again I will compliment you on this EXCELLENT model of the ARK and
the water is absolutely beautiful in color and texture!
Cheers,

Anyway, who’s to say I got it wrong?

There is one that can comment but then you cannot let us know. Not a great deal but you won’t care at that point either.

It’s also nice that artistic license like having Lott attack the Ark with a band of pirates was avoided…unlike in a certain badly done TV movie about the Great Flood.

Excellent, both the model and the ability to use your hobby to create a unique class project. I am sure that the professor had seen it all over time… until you and your model showed up.

What grade did you get Tim?

Yes indeed - what was your grade ? Also , given your propensity for certain interior “ activity details “
( read : Chinese junk captain’s cabin ) I’m surprised it doesn’t include all the animals “ two by two “ …

Excellent, both the model and the ability to use your hobby to create a unique class project. I am sure that the professor had seen it all over time… until you and your model showed up.

Thanks Bob. Yes, mine was the only Ark model project, but I must admit my favorite was the woman who recited the Assyrian curses. Brilliant and beautiful, I was attracted to her… but I knew that would have been a one-way ticket to crazytown!

What grade did you get Tim?

Yes indeed - what was your grade ? Also , given your propensity for certain interior “ activity details “
( read : Chinese junk captain’s cabin ) I’m surprised it doesn’t include all the animals “ two by two “ …

I got an A in the class - although I had flunked the course the year before (due in part to the distractions of life in a co-ed student cooperative!)

It is just as well I didn’t include any “activity details,” as the conservative professor would not likely have been amused…!

Tim,
Once again I will compliment you on this EXCELLENT model of the ARK and
the water is absolutely beautiful in color and texture!
Cheers,

Thanks Joe! My goal was to depict the waters of the Great Flood beginning to calm as “…the fountains of the deep and the windows of heaven were stopped, and the rain from heaven was restrained” but before the Ark came to rest in the mountains. At least that’s what I told the professor. I didn’t mention that I chose that moment because I wasn’t confident that I could reproduce a convincing tempestuous scale Flood!