Was there a specific firing order for the rockets on the SzF? Front to rear? Rear to front? I’m thinking a good urban warfare load out would be 4 280mm HE rockets (to tear up the buildings) followed by 2 320mm incendiaries ( to torch off the kindling) Trying to figure out where to load the 320mms to be “last out”.

According to Terry Gander in “Field Rocket Equipment of the German Army 1939-1945” (Almark), the normal load was five 28cm rockets and one 32cm incendiary. The firing order started at the rear left (as you sit in the vehicle) then rear right, middle left, middle right, front left, front right. So the 32cm rocket would be front right in your scenario.

Awesome. Thanks. I’d have thought front to rear … lower position to upper … so the rocket back blast would go under the others.

I was unsure until I looked it up, but it makes sense if you think about it. Firing rear to front means the rocket blast from the rear is only affecting an already empty crate. Firing alternate sides balances the vehicle.

Sounds about right. We would do the same sort of thing on Striker, bin 1 then 3 the 5 then 2 and 4. main difference for us was the fact the missles are in armoured bins and they had protective covers on the front.

Thanks guys. Going to go with two 320mms in the forward two spots (“Now THATS a Fiiiire”) , 280mms on the other 4. I didn’t think about the weight distribution. Would that be much of an issue with the Stuka zu Fuss? Didnt they do a rapid ripple fire, like a Katyusha? What was the fire rate on the Striker? Side question, it’s looking like 13th Panzer (unit the SzF “is assigned to”.) … of any other German units in Budapest … had winter camo. I missing something? 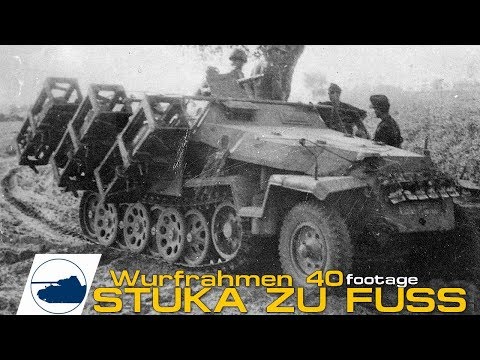 I did wonder if the vehicle would move about on its suspension, putting off the aim, but since the rockets were an “area” weapon rather than pinpoint, it probably wouldn’t matter. Not quite sure what you are saying about 13 PD in Budapest - the siege of Budapest was over the winter, so vehicles could have been snow camouflaged, but once again, would it make much difference in a built up area?

Siege was 24 Dec. to 13 Feb. 13th Panzer started off on the northeast side of Pest being pushed back to the Danube in southwest Pest , in the area of the Ferenc Jozsef Bridge, and wiped out on Jan.16. Photos / video I’ve seen dont seem to show winter camo and seem to show only spotty dusting of snow… So … I’m thinking lack of snow and more pressing issues winter camo was not applied. Budapest 44: The Storming of Pest (December - January 1945) - Bing video