It’s been a while since I last posted anything. I took off on a pretty out there diorama (that is still not finished!!), then as covid began to calm down, work came on strong. Nonetheless, I have built a few car and truck kits, but this one really stands out.

It’s a pretty highly modified 1941 Chevrolet Canopy Express. As those of you Chevy enthusiasts likely know, there is no such kit, so I got after making one. 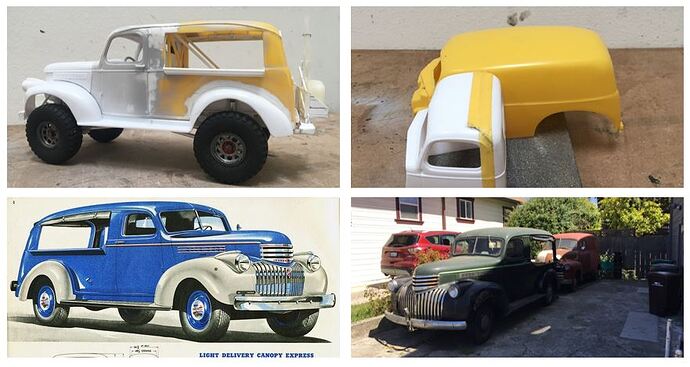 So what is this? Well, some time ago, I took a picture of the truck on the lower right - I’d never seen anything like it, and after some research, I discovered these neat little rigs were built in the mid thirties and forties, for use by neighborhood green grocers and so on - while talking with my dad about the truck he said that as a boy living in San Francisco during world war II, scavengers driving these would come through his neighborhood calling out “bottles, cans, and rags!” - as this was wartime, all part of the recycling effort.

Ok, back to the project - I really liked the looks of this and decided to build on, and to make it a four wheel drive - naturally - lol. The white kit is indeed a 1941 chevy pickup (I think it was the Revell kit) and the yellow part is from a 1939 Ford panel delivery. So, I built up my confidence and went about cutting, gluing, filing and sanding. 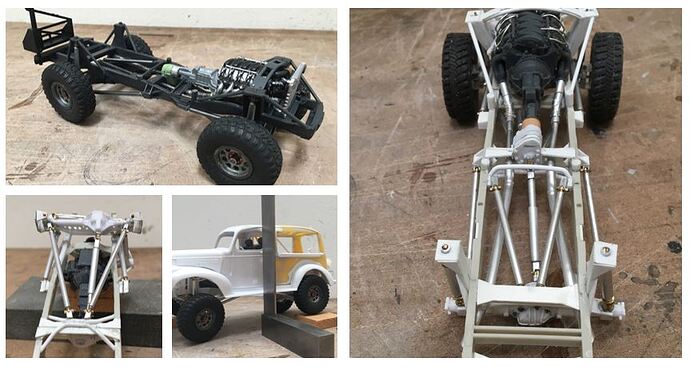 At the time, I watched several videos of some pretty neat rock crawler Jeeps and trucks - and as I paid attention, realized they were not running on leaf springs, and instead, long travel four link setups front and rear - AWESOME! So, a guy decided it would be fun to make the four link setup, and while not operable per se, it is posable - which means the axles flex and front steering is also posbale. No, I wasn’t in the mood to figure out spring rates - I drew the line there - lol

Oh, and many of these guys run Chevrolet LS3 engines - New Process transfer case with “doublers” whish are like underdrives, and trussed Dana 60 axles - perfect, lots of scratch building there.

Ok - enough rambling - back to the build: 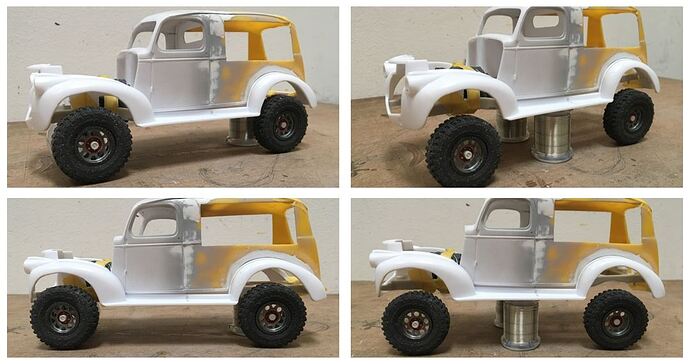 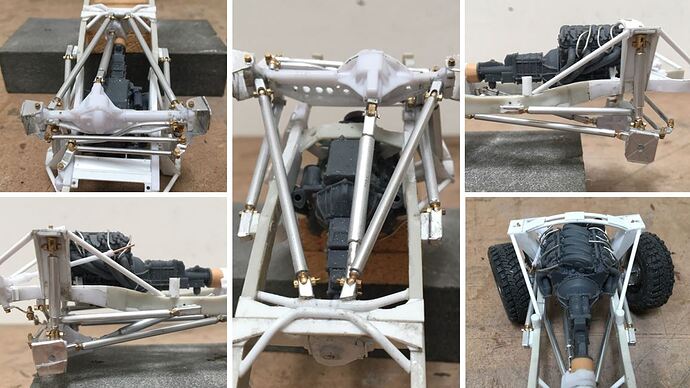 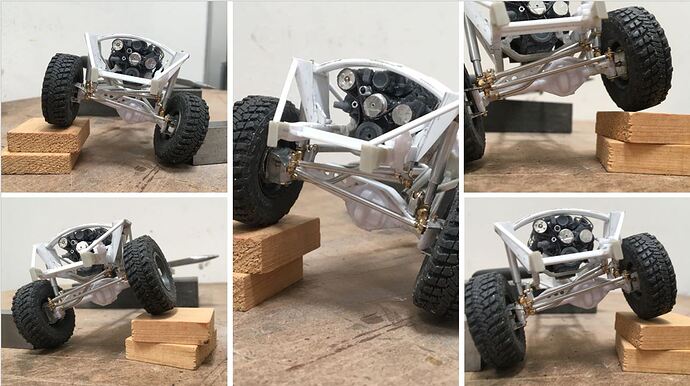 This project was a lot of fun - and a great challenge. In the last picture, you can see what I meant by posable suspension - funny enough, when this was done, I did not use those tires - Matt from the forums 3d printed up some real beauties for this - 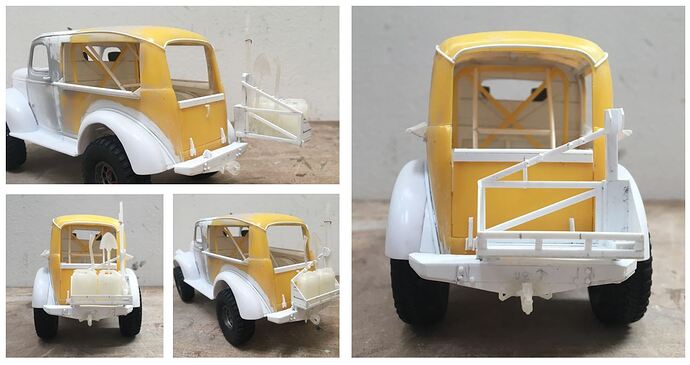 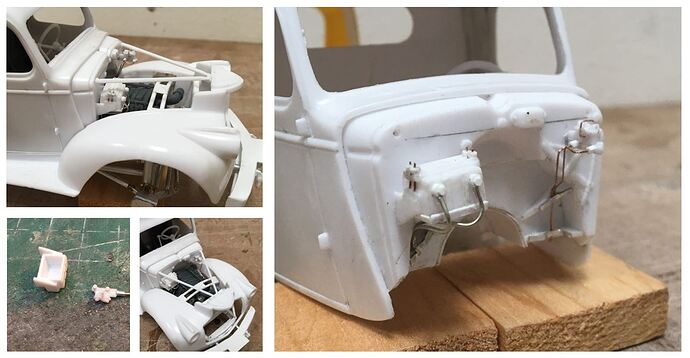 And I just kept building… 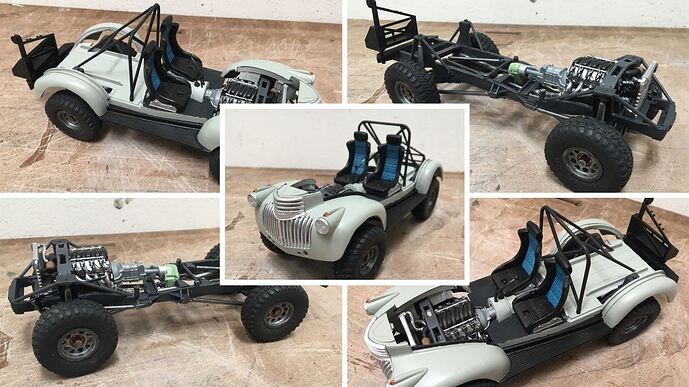 I like the way the engine turned out, but, it’s hard to see - of course, lol 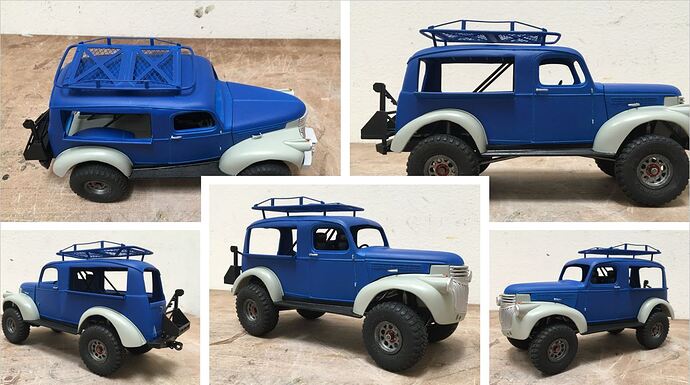 And the paint - trusty Vallejo acrylic and their metal colors. I scraped off all the “kit” chrome, and used Vallejo’s instead - sort of funny, I never get these results on an F1!

As I was on a bit of roll, I decided this needed a nice base for photos: 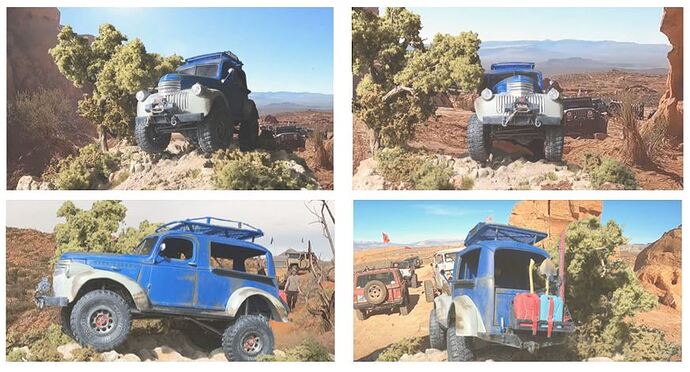 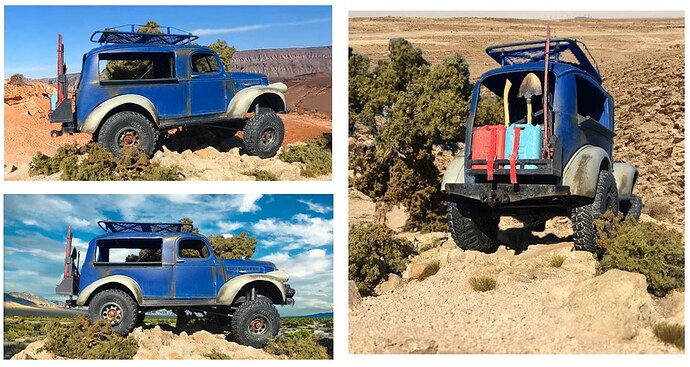 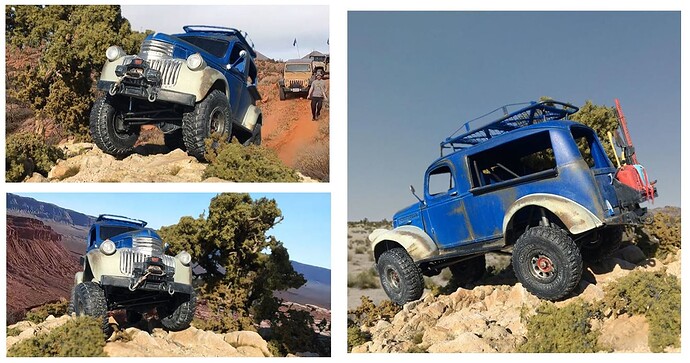 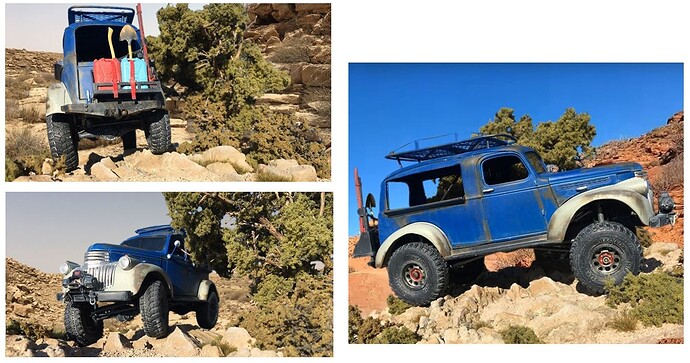 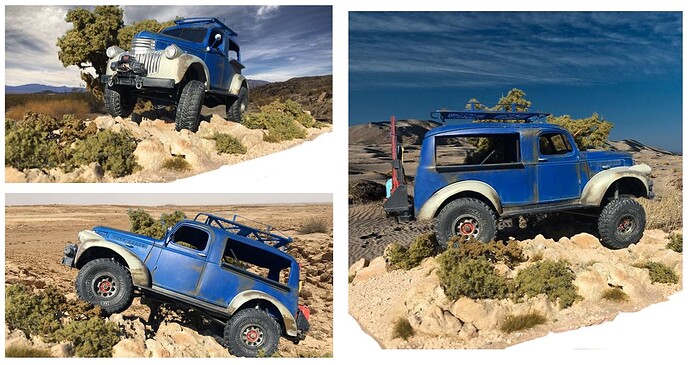 While I was really focused on my dio project, I began fooling around with ways to get better pictures - in this case, built a little base and took lots of outdoor photos. Then went into something called “Photoscape” which lets you crop images and even make cutouts - then, found good background pictures and imposed the project over them - and here you have it!

I started doing the same on the Italeri 1/24 Toyota BF44, converting it to an FJ45 - the pickup, with the same suspension - but - ran out of energy!

Thanks for having a look -

Impressive work as always Nick. As a crawler, I’m surprised you didn’t three link the front for even more articulation. LOL

It’s an old Chevy, what’s not to love here?

Awesome stuff Nick, another great project with neat drive train conversion and body modifications. The photos on the base look amazing.

Nice to see you back, great build.

Hi Nick! Good to see you slingin’ the styrene again!
I really love your early crawler conversion. And love what you’ve done with the place — looks just like Moab, UT during Jeep Jamboree.

Hi guys, thanks for having a look -

@dixon66, well, I thought about a three link - but, as you’ll see below, this was tedious enough with the four link! 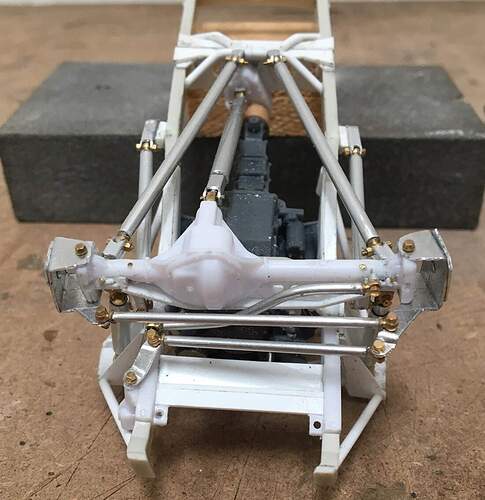 Lots of small parts to be made, then made to remain moveable. I squeezed in as much as I could figure out how to - pitman arm, panhard bar, drag link, knuckles…and on and on - and of course, getting the axle clocked with those trailing arms…as you might imagine, it did not work the first time

the goal was to get as close as I could figure in scale, which meant the arms don’t hit the driveshaft, steering doesn’t bind, and wheels in camber…did I say it took a few tries to get it right???

and the frame…it started as a Ford F-150, but it became pretty clear early on it would not work if left alone, so it was hacked up and rebuilt - the front end - the towers for the shocks, range of travel for the axle, keeping the headers inside the frame and so on.

@Tank_1812 thanks! Nice to be back - it’s funny I posted this well after midnight - I spent the rest of the evening working!! and just felt like posting - a bit like before, model building being a fun not work distraction!

@justsendit Hi Mike, thanks! and yes, many of those images are from Moab - in fact the truck that inspired this build is based on a guy on the Fab Rats youtube channel built. He gives a step by step instruction in a few videos showing how these go together, and he lives in Utah, and take his truck on those trails. The other backdrops - range from the California to Saudi Arabian deserts - lol -

Hi Nick, Good to see a build from you on here again. And of course another one of your signature scratch built creations that can articulate for posed photos as well.

@kosprueone , Hi KSO, thanks - this was a fun project, glad you like the photos too.