Well, it seems that I’ve been bitten by the resin printing bug. A few days ago, some poor financial decisions were made and I ended up with a Creality Halot One SLA printer, and a UW-01 washing and curing station. 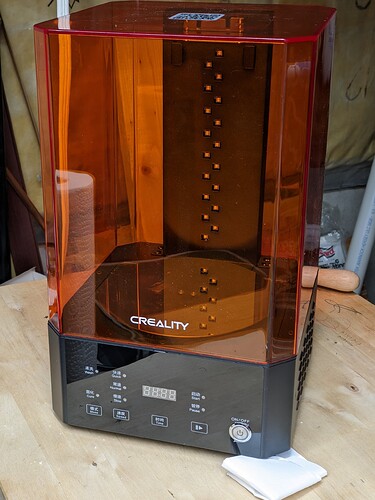 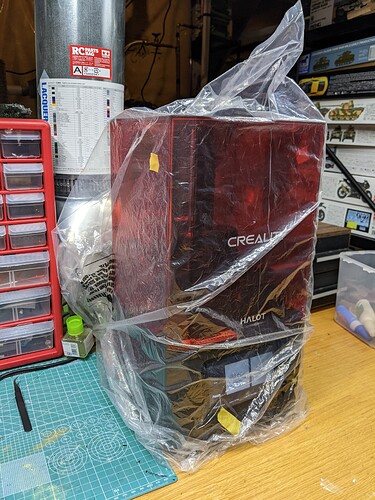 Safety is a top priority! The wrap you see over the resin printer is to allow fumes to be better sucked out by my exhaust duct.

So far, I’ve enthusiastically tried, oh, five or so prints that failed utterly. However, after messing around with the Lychee slicer software and going absolutely bonkers with supports, I’ve had a successful print of a Canadian Ram Kangaroo apc in 1/100 scale! Detail is half decent, especially for the scale, and I’ll be adding some details with things like brass rod, etc. 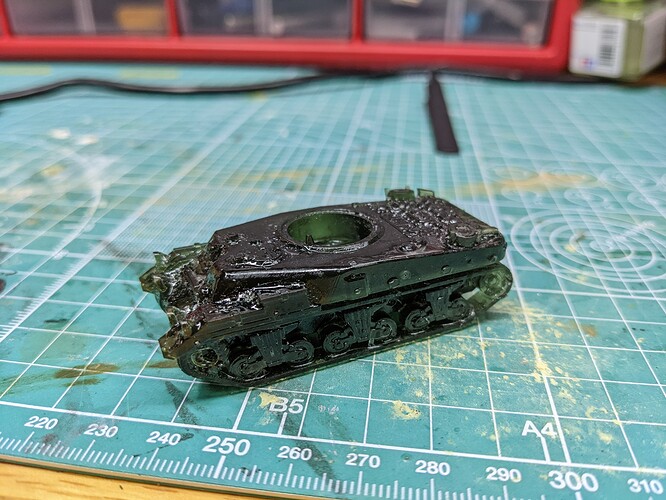 Sorry that it’s hard to make out - the black resin I’m using sucks all the light up. I plan on getting some plant based grey resin soon though, so hopefully I’ll be able to show off the prints better! Before painting each print, I’m going to airbrush Mr. Surfacer 500 on it.

I plan on printing even more than building, primarily because university is taking up the majority of my time and I can let this run in the background while I work. 1/100 scale has some interesting opportunities now, especially for little dioramas! I’m going to post updates on printing to this thread, so thanks in advance to anybody who takes a look! 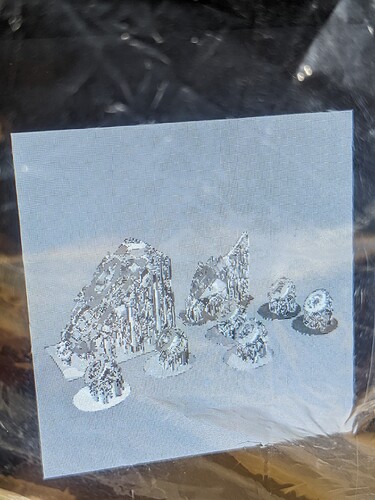 I did a 1/100 T-64BV, it came alright, a little offset but I think that’s because of the print angle I used to save time. Lesson learned! Otherwise I’m pretty happy with it, because in 1/100 scale it looks alright and that works for me. Definitely more detail than an injection kit. 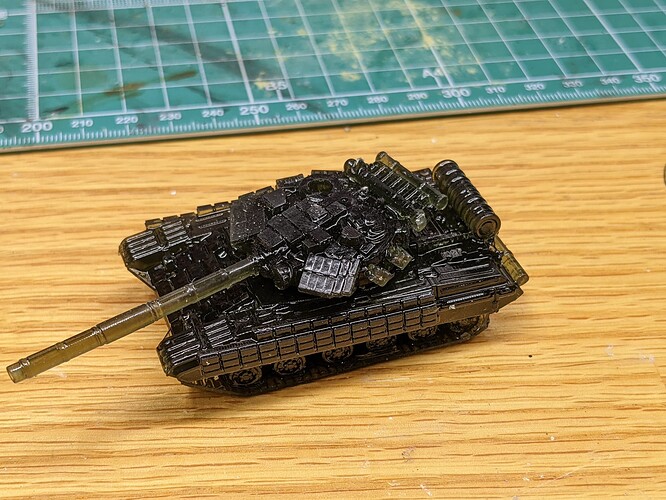 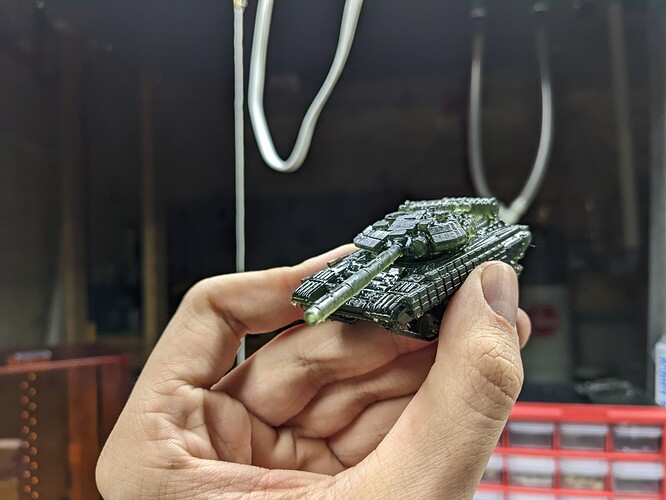 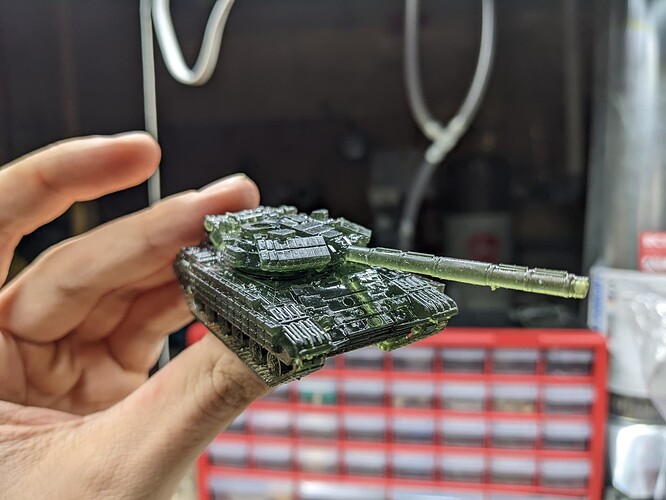 I think I’m starting to finally have a bit of an idea of what I’m doing. Tomorrow, I forsee either a leopard or something completely different. A TLAV perhaps? 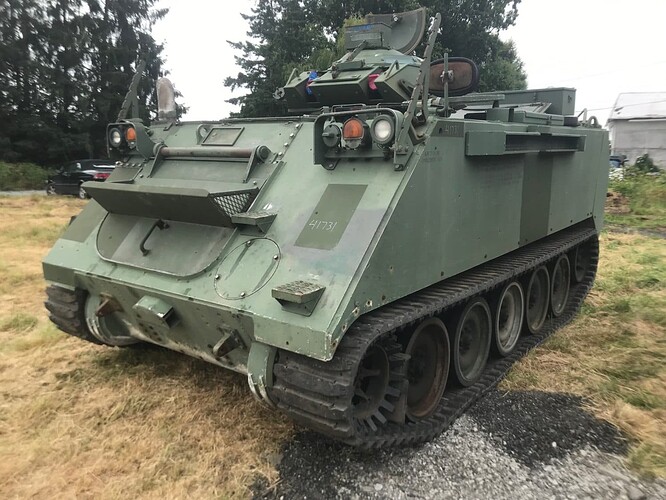 Maybe. Just maybe.
In other news, I’ve decided to order some plant based resin from Anycubic. It’s darn expensive ($30 for a half liter bottle!) but I think it might have fewer toxic fumes, which makes my life easier and might just keep me from going to the giant Tamiya store in the sky a few extra builds

Thanks for looking! I promise to throw some paint on these one day.

well done mate, stick with it!

now hurry up with tbose 1/35 NLAW’s you promised us!

@DennisatAutoloader get going mate and put me down for a few of those! 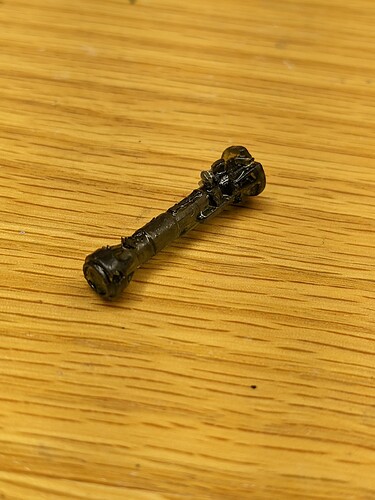 The NLAW printed. I’m not completely happy with it though, it’s come out a bit tilted. I’m going to try a new print angle and hopefully that should help. Otherwise, success is in sight!

I also assembled my Saladin 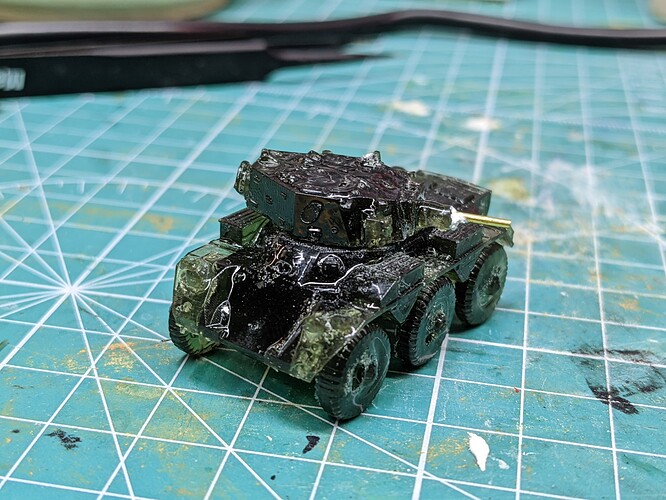 And the TLAV is printing. I’ll update you guys as to that tonight.

keep at it mate, these things need a bit of tinkering before you master them!

That’s half the fun! This whole resin thing is a learning curve, and I’m loving every minute of it.

when you master it come and show me how to do it.

The TLAV printed. Minor fork-up with the rear stowage box, but that’s alright. This isn’t supposed to be a perfect process, after all. 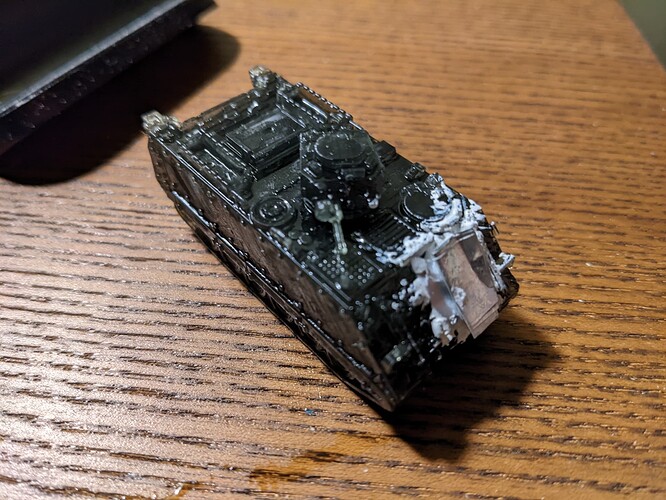 I had to putty over the front plate because (I think) I washed it too long. I’m using a far more IPA-concentrated solution now than I was, and I figure this was just a relatively easy spot to “burn” through. Well, live and learn! Anyways, I think it’s cute. This will probably be painted up as weathering practice for… 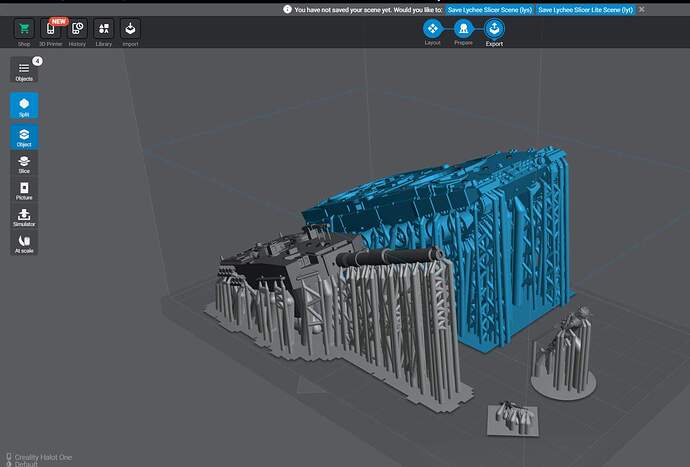 This! My first actual 3d printed project. It’s a Leopard 2A4 for the Micro Machines Campaign. I’m also printing a custom posed Canadian soldier and C7 rifle in 1/100 to go along with it in the diorama. We’ll see how it all prints tomorrow. I may actually end up re-slicing the tank at a smaller angle. Right now the tank is at about 65°, I’m going to push it back to 55° to make sure my FEP film doesn’t snatch anything from the supports. Yeah, it’ll mean redoing the supports for the hull and turret, but that’s alright, I should have a few minutes before tomorrow’s midterms. The figure is pretty exciting, a fully poseable Canadian in full kit, helmet scrim and all. It’ll be showing up on some 1/35 Leopards and LAVs for sure.

35th scale… How I miss it… But 3d printing is a nice thing to work on during school!

In other news, I’m going to try printing the NLAW at a shallower angle if I have time tomorrow. As well, I’m mulling over getting the file for an FGM-148…

Anyways, stuff to think about tomorrow! Thanks for following along today guys

Update for this morning:

The Leopard is on the printer, should only take five more hours by now. I’ve also used TinkerCAD to fling together a basic Kontakt-1 ERA brick. 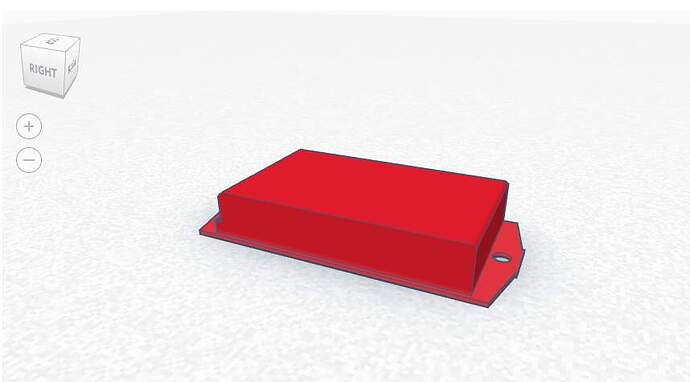 I plan on continuing to edit it, of course, but for now this is fine because I plan on using it on small scale stuff. Plus, this is the first time I’ve designed a 3d model!

Also, I’m probably going to end up getting the .stl for a cope cage. Exciting times!!

ran out of resin in the vat, of all things!

“Wait, you actually expect me to put the correct amount of resin in the vat and not just eyeball it!?!?”

However, the silver lining to that is this: 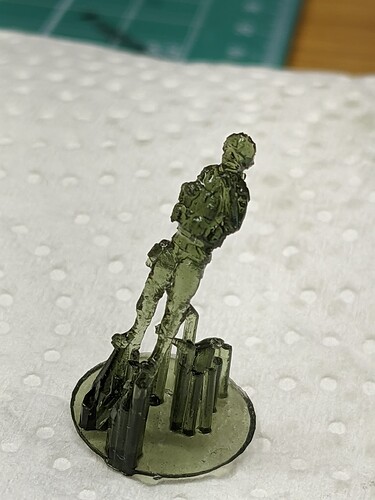 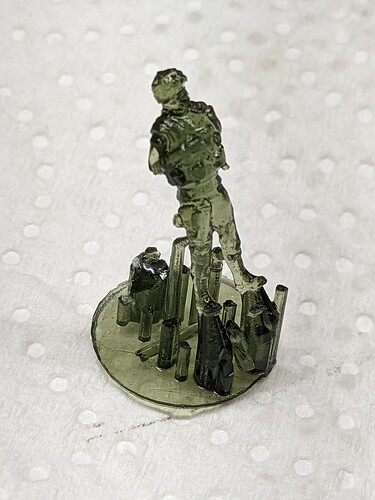 So yeah! That’s how things stand right now, tonight I’ll prime and paint the figure and the kangaroo, which was my first print.

Time for a long-delayed update. I’ve tried my hand at 3d modelling, and made a file that represents a Kontakt-1 era brick. This is the print result: 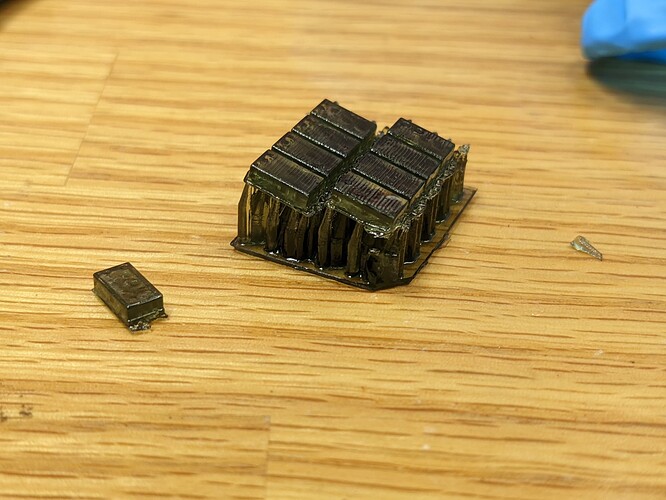 All in all, not horrible! I have a T-55 that I’m going to build for the Sci Fi campaign with these in South Pacific colours. 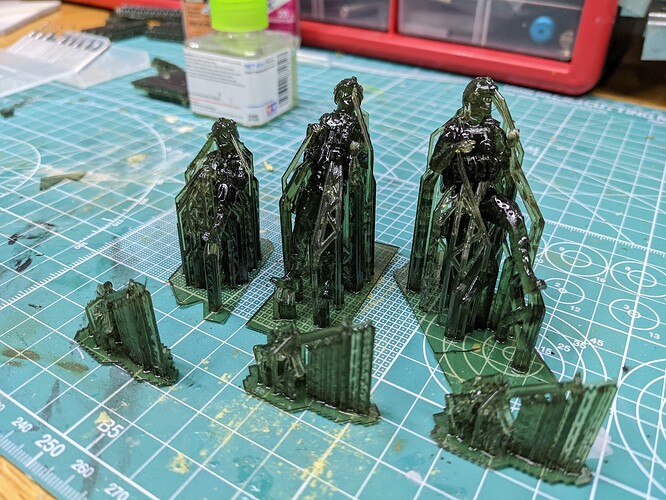 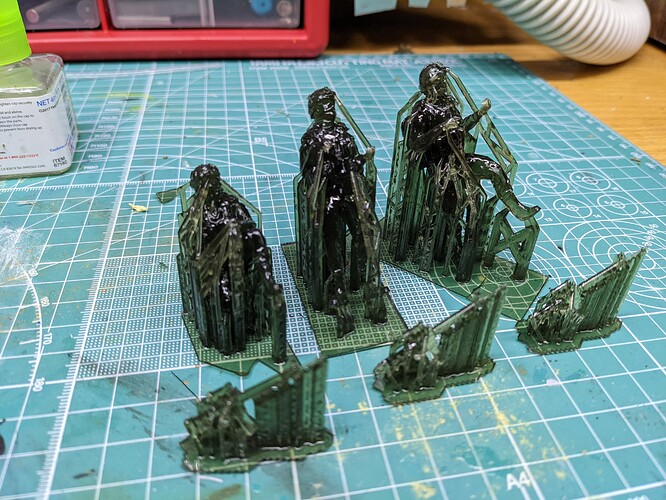 Here’s what I’ve been working on… Modern Canadian soldiers in 1:35. I’ve got files that are “rigged”, so I can pose them however I please. And of course, the obligatory C7A2s!