This is partial text from the full article (usually with photos) at https://armorama.com/news/operation-banner-gordon-highlanders
LeeDobson March 7, 2021, 1:52am #2 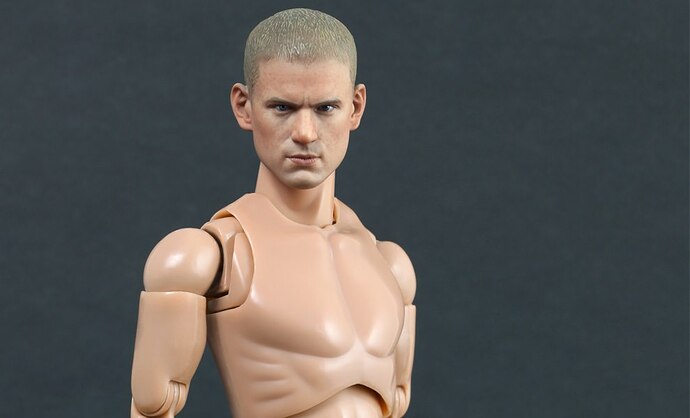 It does look similar. Lee, are you sure it is the same sculpt?

This is quite a large model so a lot will be visible here. What I would comment on is the apparent thinness of the '58 pat belt - it just looks a bit weedy to me. Also, the suspension hooks (for the poncho carrier) on the rear of the belt are missing, and the size adjusting grommets appear to be modelled as standing proud when in fact they were essentially holes. An easy fix with a small drill but perhaps these should have been moulded in.

Also it was SOP (Standard Operating procedure) for the rifle sling to be secured at the butt to the user’s wrist; the sculptor has moulded some sort of strap around the right wrist but it is unclear (from the pictures) what it is meant to be; perhaps the sculptor was unaware. It might be that the purchaser has to make his own sling from lead foil which might be provided in the kit, and attach it to the sling-swivel on the butt but if so, then I would have thought it would have been depicted in what, after all is an advertising picture.

I personally, were I to consider purchasing this - do not have that much of a problem with the origins of the head; to me the belt thickness just grates, and this would be quite noticeable on such a large figure. The sling would be an easy enough fix.

It would have been nice to have been offered the option of a steel helmet and visor, or the specific riot helmet to be portrayed dangling from the belt/pouches set-up.

On a more positive note, I imagine this would paint up really well for those who like this scale and subject matter. Just note that the trousers depicted are not the camouflage DPM ones but the more versatile (and comfortable) Trousers, Lightweight, in olive green; these trousers had an alarming propensity to catch fire when say, petrol bombs were used and orders were subsequently issued that the non-flammable combat trousers were to be worn.

Despite the obviously identical facial features, here is another telltale sign, this seam, these vinyl hot toys heads are socket mounted on a hard plastic neck with the join along the jawline and cutting straight under the ears, you can see it hasn’t been disguised well enough in the photo, the gloved hands also look to be Dragon Models hands from their 1/6 Falklands line, from a major and respected manufacturer this is piracy and mind boggling because the sculptor can obviously sculpt well without resorting to such lazy plaguarism 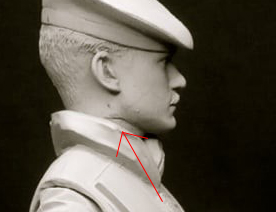 Just to play Devil’s Advocate here ( and I’m really not into any legal tussling) but does it actually matter? The very blurb from the Hot Toys site viz " the perfect base for any 1:6 scale fabric costumes and accessories to create unique custom figure" would indicate that this is what it’s designed for; the key being “to create unique custom figure”. It would seem to me that this is exactly what the Hot Toys figure is for - to facilitate the ultimate manufacture of a model for whatever reason. If use of the components gives a sculptor a “heads up” as it were, (no pun intended) then what harm has been done? I personally don’t see it as a massive breach of anything very much, but then, as I say, I’m no legal eagle.

These nude 1/6 figures are intended for customisers to dress and custom as they wish using 1/6 clothing and kit, not for sculptors to take the lazy route and profit from someone elses work

You can use a 1/35 Hornet head to customise your figure for your diorama, BUT if you sculpt a figure for sale and use that Hornet head then Roger Saunders ( the sculptor of Hornet ) has a legal stance to take against you

Piracy is piracy, no matter if it’s done by a Chinese recaster or a lazy sculptor, both will make money from it

I have read the comments and nothing said has put me off as it looks a great figure.

The details would be unimpressive in 1/16.