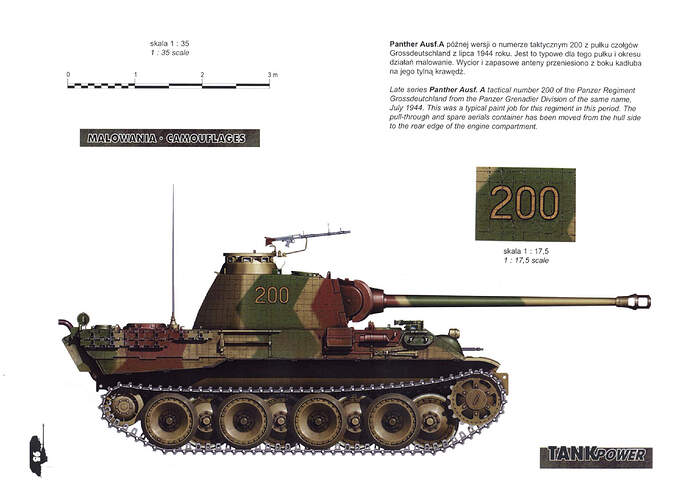 Tact No2003009×2135 348 KB
I have more than 10 books with Panthers in and not one has a photo of the one above.
I have tried to find one online but no luck so far.
Takom/Das Werk have the scheme as an option but they have the gun cleaning rod container mounted on the side not the rear and the skirts have zimmerit as well.
In the picture above the cupola has no zimmerit either.
Can anyone enlighten me please? Or better yet have a photo of a late Ausf A from the same regiment?
creading December 18, 2020, 3:43pm #2

The only photo I could find is from “God, Honor, Fatherland” a photo history of the Panzergrenidier Division of the ‘Grossdeutchland’ on the eastern front 1942-44
The caption reads-
“Standing in the cupola of his command Panther, Panzer regiment GD commander Oberst Willi Langkeit watches with amusement as Oberst Karl Lorenz of Pz.Gr.Rgt.GD chats with Leutnant Wentzke (in camouflage smock) and Hauptmann Gerbener outside Targul Frumos, May 1944” 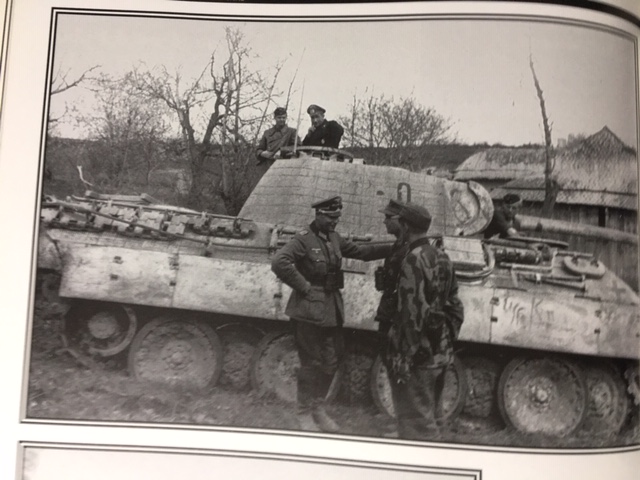 Thank you.
Interesting photo. So it looks like I can forget Zimmerit on the skirts and it looks like the tube for the cleaning rod is not mounted on the rear.
So unless someone else comes up with a different photo it is 50/50 if Zimmerit is on the cupola.
That assumes of course that the picture is an Ausf A late?

That assumes of course that the picture is an Ausf A late?

Can’t help you there. It’s been years since I researched and built a Panther. I used to know the subtle differences but now I could only pick out a ‘D’ ‘A’ or ‘G’, not early or late. Hopefully someone adept in Panthers can chime in or provide you with a photo. Good luck.
Cheers,
C.

Here is another GD Panther A 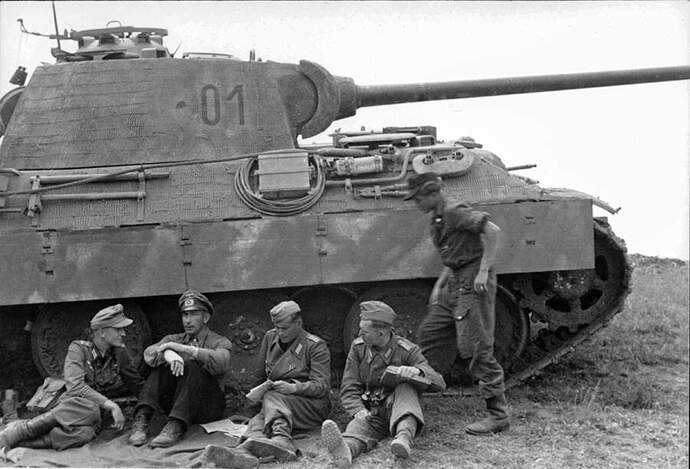 The camo pattern on the profile looks more like those worn by Wiking SS PD, not Grossdeutchland.

Thanks for your help.

Zimmerit was never applied to cupolas. They were generally out of reach of an infantryman trying to apply a magnetic mine. This was largely a theoretical exercise–the biggest users of magnetic mines were the Germans themselves, so Zimmerit was basically a solution in search of a problem. When it was discontinued in September, 1944, nobody missed it.
It was only occasionally seen on skirt armor, since a magnetic mine on a skirt would probably do little damage to the main armor.

I can’t vouch for the accuracy of any of the identifications, but all of these tanks were purported by the websites they were posted on as belonging to the Pz Div GD: 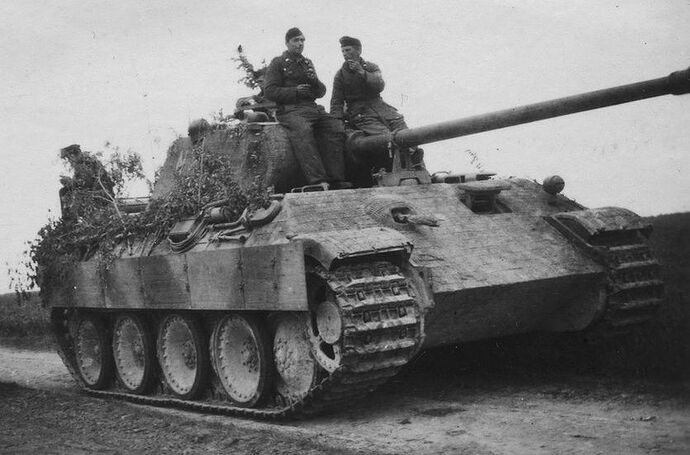 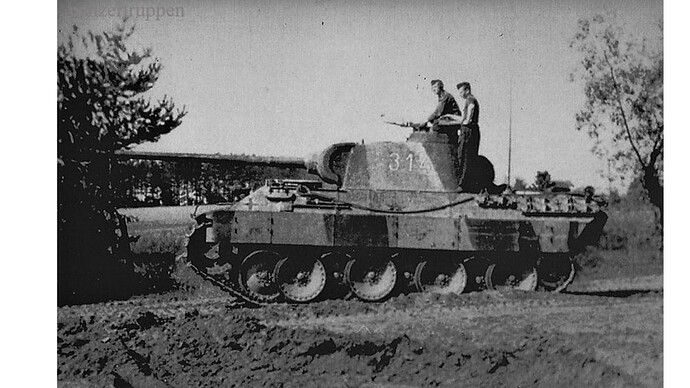 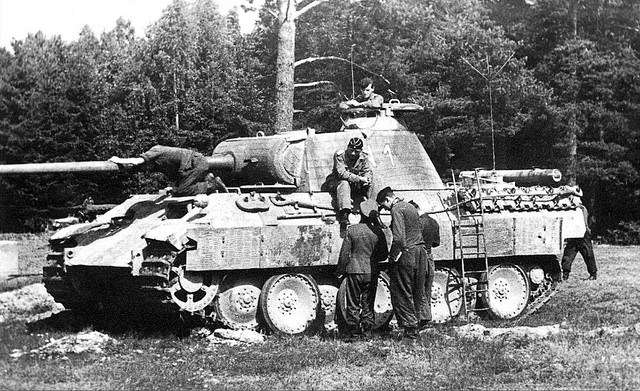 As a side note - The first and last photos may be of the same tank, N1… 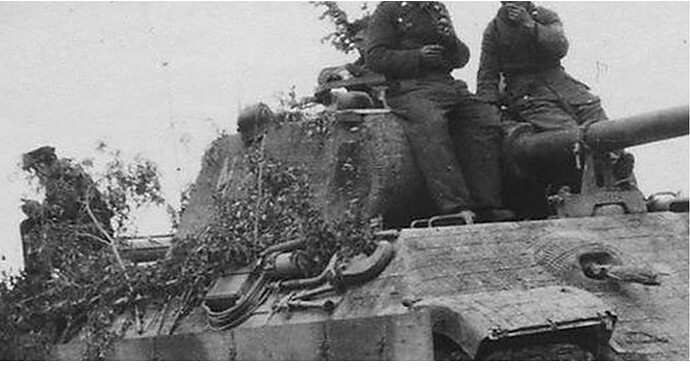 Like Gerald said, I have never seen Zimm on a cupola…

I have been looking hard for a photo of zimmerit on a cupola with no luck. I’d leave it alone.

@Catsrcool , my understanding is Zimmerit on Cupola is very rare on a Panther. It was done on occasion. I have no information on the specific tank you’re asking about.

@geraldowens Gerald, on at least occasion Zimmerit was applied to Panther cupolas. I was also shocked to learn that.

For a Picture of a Panther A with Zimmerit on Cupola, Check Panther External Appearance & Design Changes by Roddy Macdougall & Martin Block on page 86 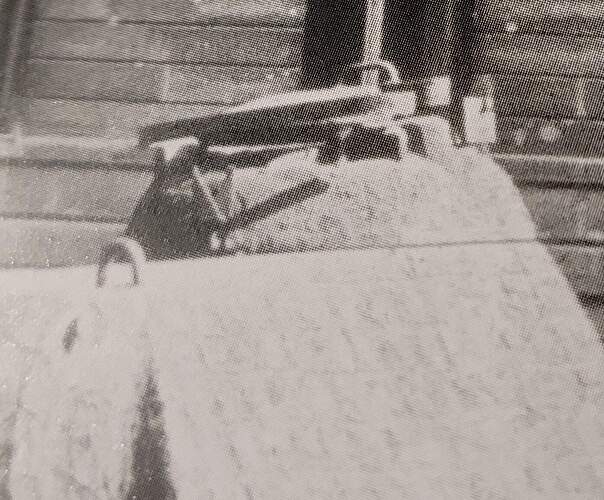 Part of Picture reposted for discussion purpose only.

Panther External Appearance & Design Changes by Roddy Macdougall & Martin Block is one of the most impressive references on Panther I’ve ever seen. It had many shocking bits of information…like a picture of a Panther A command tank with the old Panther D Cupola on the new Panther A turret.

The book is incredible and if I could only buy one reference this year it would be Panther External Appearance & Design Changes. It’s well worth purchase price.

Assuming the tank is OEM and hasn’t had any parts swaps during maintenance, an A with no pistol ports on the turrets, a kugelblende, and sporting zimmerit would have started into production around the tail end of 1943. The other things I know that date a particular vehicle I can’t see in the photo the way the tank is posed. 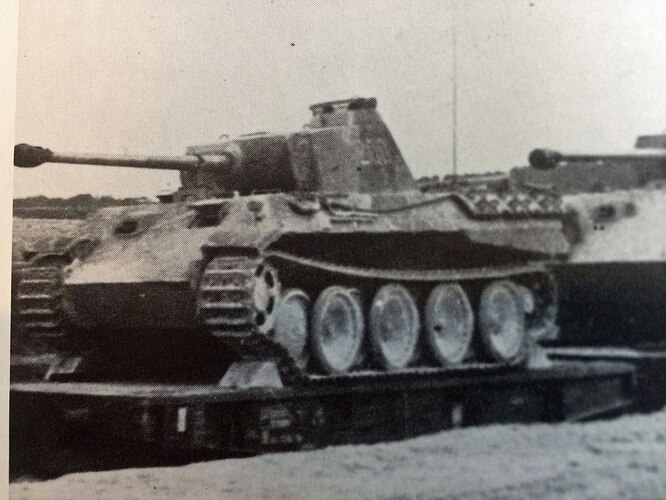 Sorry for the low resolution, best I could do at the moment. Image is from Panzerkorps Grossdeutschland, page 132, Schiffer Publishing. The 200 is unambiguous in the original.
Looks like that’s the cleaning rod tube on the back.

While Zimmerit is uncommon on Panther cupolas, I was looking at one only yesterday which had it. From the pattern, it was a DB or MNH wagon, I think of SS-PR.12 in Normandie (I was looking at some images from that campaign last night).

I just found this thread. I’m not much of an armor guy…or haven’t been till like…now. I’m looking for a good paint guide reference on Panther Ausf. A tanks. I’m going to try my hand at this and don’t want to just throw this thing together. Thanks for any help you guys can be

Hey Joe! I can’t offhand recommend any good reference books, but I will say that the Concord and Squadron “in action” books on the Panther tank are not ones to get. I was disappointed in that respect on both books in regards to color scheme references.

Thanks for the heads up Carlos. I’ve seen one from RZM Imports entitled, “Panther and its Variants” from Walter J. Spielberger that looked decent but haven’t read any real reviews as of yet.