P-40 B/Cs (not sure 'bout later models) had formation lights on the fuselage, below the rear of the cockpit. Were they clear/white or red and green (like nav lights)?

Hi Sluff, give me a day or two but I’ll try to get to my P-40 references and find out.

Okay, sooner than I expected. They were blue on both sides - sometimes. I’ve read that Bert Kinsey’s book on the P-40 volume 1 refers to the light, at least on one side, but people say it is inconclusive.

I may have a source with access to one of the restored Longnose p40s. I’ll try to hunt them down and ask him.

Just found this, a cornucopia of information!
http://soyuyo.main.jp/p40b/p40be-1.html

Awesomeness! Blue it is. I had someone say that it was a port for a very pistol. Unless the guys at Curtiss had no freakin’ idea what they were building … Also how would you fire a very pistol out a port that was about 2 feet below and 2 feet behind the pilots seat??? ( Next to the fuel tank no less!)

I looked at Aircraft Pictorial 5 P-40 Warhawk by Dana Bell. On page 47 it has a P-40B photograph identical to the one you posted, and above that a Curtiss photograph of the P-40-CU. The light is labeled as a formation light. Inside the front cover is a color photo aircraft being assembled outside the Curtiss plant, with a very clear view of the blue formation light on the left side. In the background you can see the right side of an aircraft and the position of such that you can see the light on the right side, too. It also appears to be dark blue. The caption states that there is a light on both sides used to eliminate the wings to increase visibility. The P-40-CU does not have the formation lights. There are many other detailed publicity shots of early P-40s in full color, and none of the -CU P-40s have that light that I’ve spotted. I conclude that they were installed starting with the P-40B. However, on page 66, it shows a lineup of P-40Bs and Cs in ohio. In the front row each one that you can see that part of the fuselage it has the formation light. The second row, the first P-40 does not have the formation light.

Have the book.Where I got the pic I posted. Who started this P-40CU thing? Every one was a CU . P-40E-CU, P-40K-CU… CU is just the code for Curtiss Buffalo. All production plants had a letter code. Boeing Seatle was BO, Boeing Reton was BN, Boeing Wichita was BW. 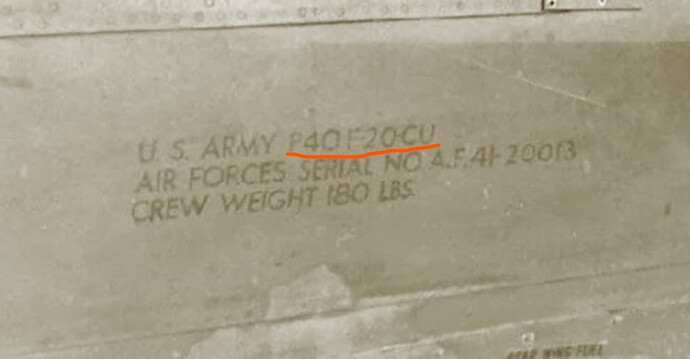 I don’t remember if P-40s were built at plants other than Curtiss Buffalo. I recall reading that Curtiss management was so bad, that the Army Air Force considered dispersing production to other factories. I suspect that other factories were already being considered for better aircraft being built by better companies. P-47 production was farmed out to Curtiss and they opened a plant in Evansville Indiana, producing P-47G. Apparently the P-47G quality was so bad that only a few, if any, were sent overseas. I’ve never read any details about why Curtiss management was so bad, but I’ve read that it was a factor in their inability to produce improved aircraft, and led to the implosion of the company once the war contracts ended.