Looking for info on P-51Ds with the 3 shot bazookas under the wings. Seen a number of pics ofP-47s, P-38s, and early P-51s with them …even a P-39. I’ve only seen 2 photos of P-51Ds with them. One is a 2nd Air Commando bird, like the one in Airfix’s 1/48 kit. Other has just national markings , so I’m guessing a factory T&E craft or a publicity shot. Were there any other users of the set up or was not a practical system?

Also the 1/32 Hasegawa kit, reviewed on Cybermodeler Online. The Canadian Warplanes 3 article mentions “The Mustang Mk. IV was armed with six wing-mounted .50 calibre Browning M2 machine guns with 12,100 total rounds of ammunition; three-to-four under-wing attachment points for bazooka tubes, bombs, rockets and drop tanks.” That doesn’t indicate how widespread the use of the bazooka tubes was, though. Flickr has a photo of a P-51D model with bazooka tubes in Israeli markings, although without any documentation that has to be rated dubious. And there is this photo of P-51D-10-NA 44-14866 with bazooka tubes (another photo), which looks to be the one you found; apparently it remained in the US with NAA for testing, which doesn’t help for operational use.

You’re right; the vast majority of pictures available appear to be the 2nd Air Commando example, although there are lots of companies selling the aftermarket M10 launchers – but that’s more indicative of it looking cool to have them hanging off the bird than their actual use.

The “3to4” under wing attachment points were for HVARs. (Supposedly the Aussies had up to5 /wing ,if the bomb rack was removed) They were late (like last months) war. there were 4 / wing, single rocket on each stub. I’ve heard of their use in fighter sweeps by 51s from Iwo, over Japan and the Navy used them on Iwo and Okinawa (I’d presume carrier raids on the Home Islands) I’m under the impression that did not make it to Europe before VE Day. They were used heavily in Korea … seems like they were THE weapon of choice. If photos are any evidence the normal load out for an F-51 was a 500 pound bomb or can of nape and 3 HVARs under each wing.(photo is 2 Sqn, SAAF in Korea. 3 HVARs and a can of nape / wing) The bazooka set up was a 3 pack on a single, special mount and came out before the stub mounts for the HVARs. . 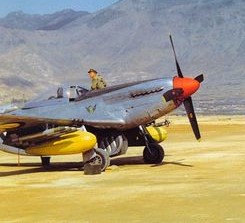 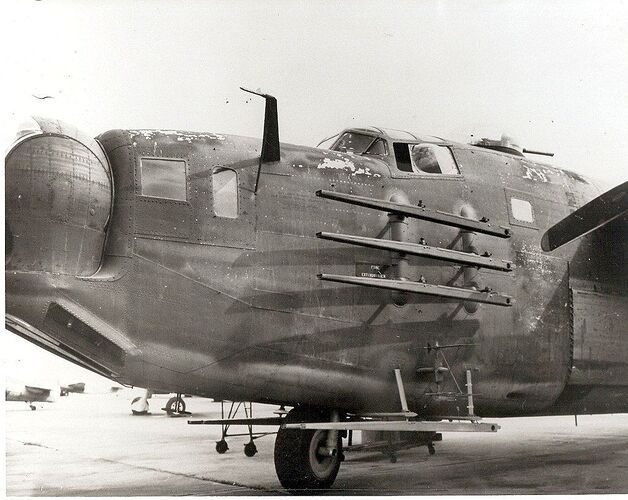 Had to refresh my memory. The P-51D-25 was the first to get the stub mounts for the HVARs. Not sure when the -25 hit the scene. As for the rocket itself, some were shipped to England prior to D-day but doesn’t sound like much use was made of them in the ETO or MTO. Sounds like the M8 system, as was ground attack in general , a P-47 thang. Sounding like the P-51/ M8 combo was predominately a CBI item.