There you find an episode that gives ideas for a dio – the two tanks close one to orher, the gun barrel of the Panther against the Sherman turret and the german crew emerging from the hatches:
“Paris 25 August 1944

At 1 PM, under the command of Commander La Horie, the 1st Tank Section (Lieutenant Bénard) launched an attack on the Hôtel Meurice, supported in its advance by two infantry sections from Tchad. The Meurice hotel is the HQ of General von Choltitz, commander of the German garrison of “Gross Paris”. The progression begins along the Rue de Rivoli; the infantrymen leap from pillar to pillar and door to door; Lieutenant Bénard smashes down an anti-tank barricade and leads to the Place de la Concorde. There, his lead tank the DOUAUMONT (tank commander, Sergeant Bizien, twenty-one years old) comes face to face with a Panther, engaged in a gun duel with Shermans who pull him from the top of the Avenue des Champs- Elysées. He fires the shell which is in his 75, an explosive, which effect is null on the thick armor of the German; then the gunner, having no more perforators to hand, reloads with an even more ineffective smoke. However the Panther begins to turn its terrible 75 PAK towards the DOUAUMONT, but fortunately its turret, operated by hand, cannot turn quickly: the driver of DOUAUMONT, Campillo, rushes towards the Panther and spurs it; the German 75, given its length, was stopped in its rotation by the wall of the DOUAUMONT turret and could not fire on it. The Boche crew, taking advantage of the artificial cloud caused by the smoke, left their Panzer and rushed through the gate of the Place de la Concorde in the Tuileries garden. ”

Does anyone know where I can find info about that Panther – variant, unit, colour scheme, markings, …

For those that knows Paris, what side will be more probable the Sherman sits related to the Panther?

Hey José here’s one image of your Sherman (for discussion purposes only);

World War II. Liberation of Paris . The Tank "Douaumont" of the 2nd...

This (possibly) is your Panther but you should read the comments below the image;

and another view of the same Panther (for discussion purposes only); 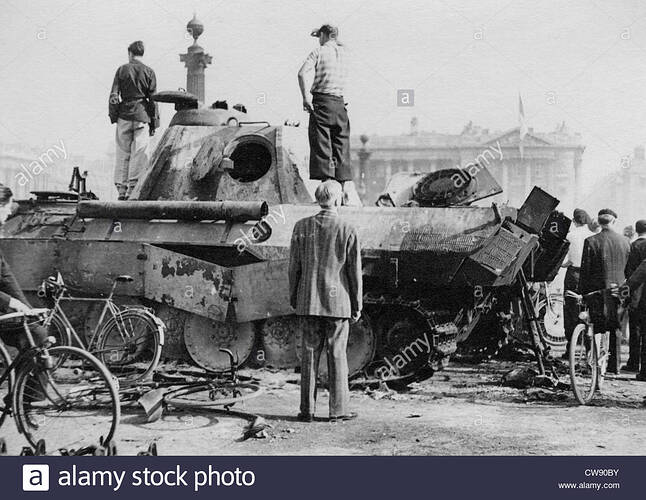 In the few minutes it took to find these images, I couldn’t find a clear identification of which unit it belonged to but I’m sure you can. Looking forward to seeing your diorama, it’s looks like a great subject 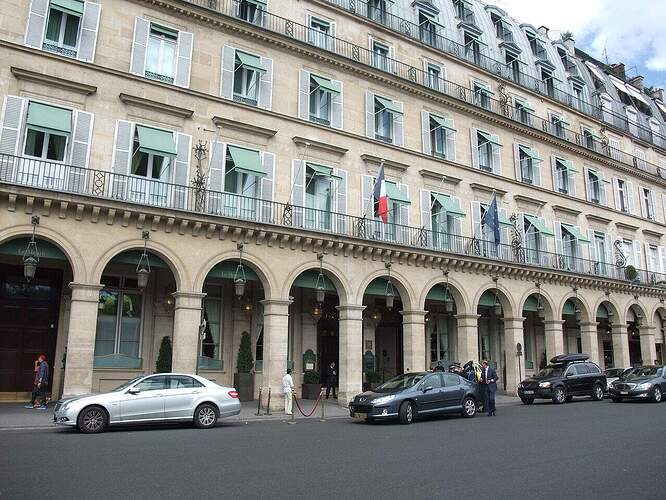 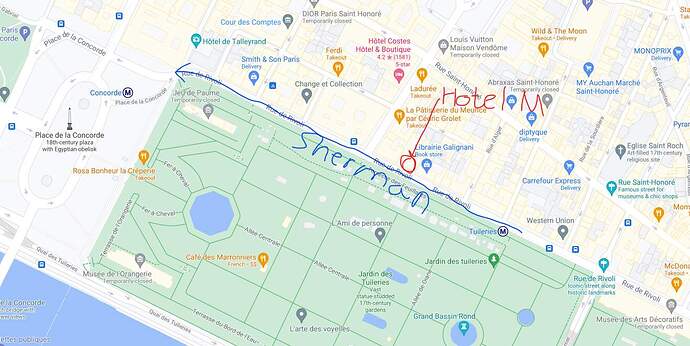 bild1418×702 225 KB
Shermans at the top of Champs Elysées (top left in map view) fires
along C E at Panther located somewhere on Place de la Concorde,
trees along C E restricts the firing angles so the Panther needs to be
somewhere in a narrow strip. Probably closer to the park at the right
corner of the map view. Maybe the Panther is facing the Shermans
already firing at it (I would prefer to turn my thickest armour towards
the enemy) so the front is facing left in the map view.
Bizien comes out of Rue de Rivoli so he would presumably see the
right side of the Panther at an unknown angle, maybe 90 degrees but
it could be another angle since the Panther would probably be showing
the frontal 60 degrees towards C E so the angle could be anything in a
60 degree arc from the side of the Panther (30 degrees each side of 90 degrees.
If I would have to guess I would say that Bizien came in slightly to the rear of 90 degrees.
The reason for this is my guess that the Panther had two main directions of fire (orange arrows)

The destroyed Panther in Dioramartins post above seems to have been somewhere here:

This is further forward or west than my sketch above 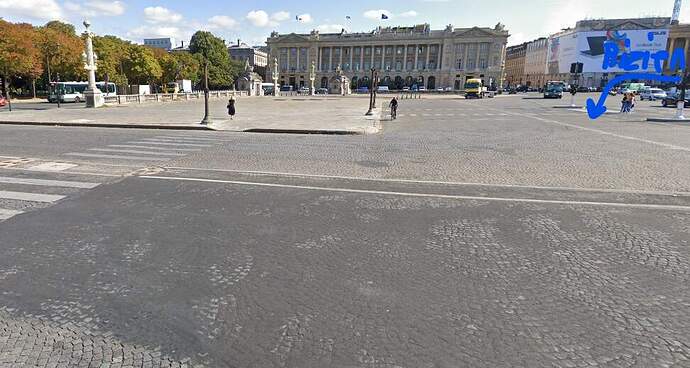 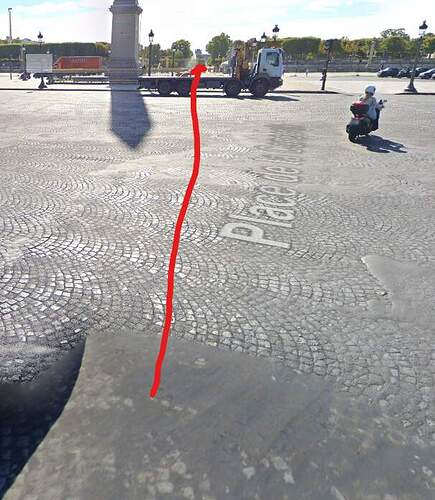 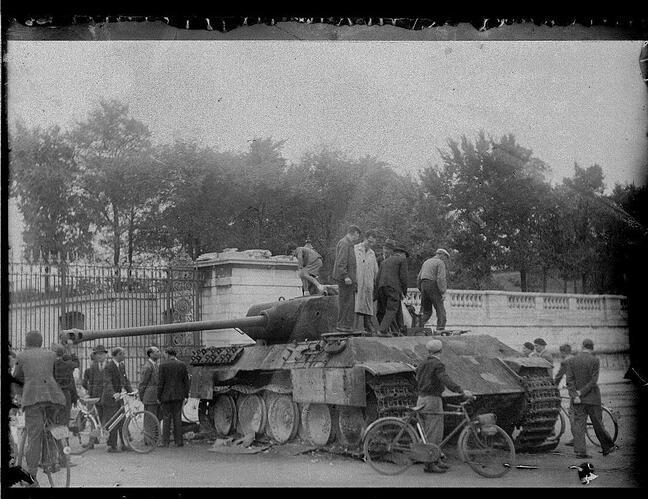 That image makes a LOT more sense.
Close enough to the gates for the crew to escape into the park hidden in the smokescreen

You can even notice the park portal shadow in the lower left corner of this picture : 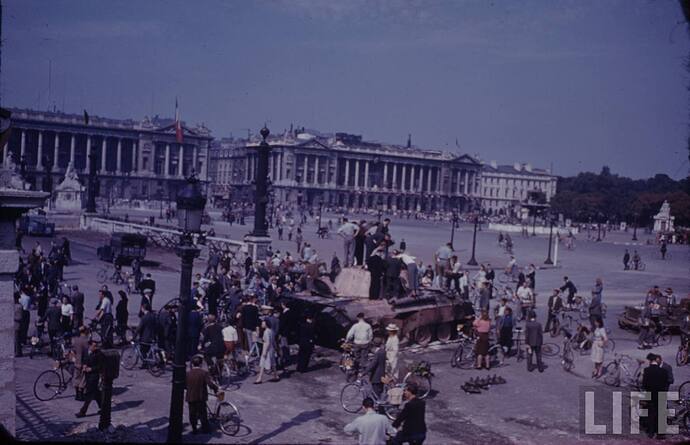 The Life photo has been mirrored. Should be like this: 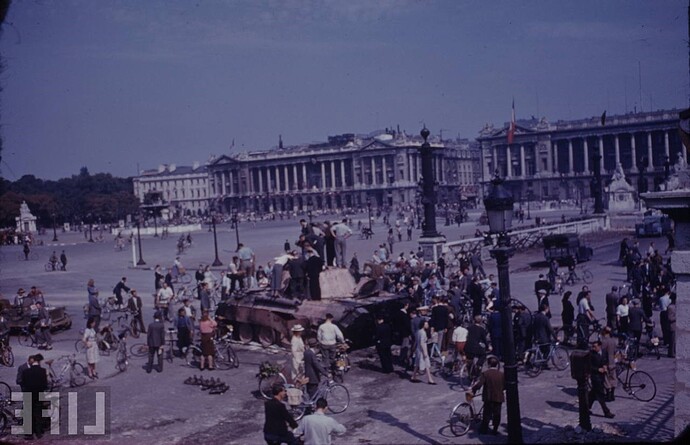 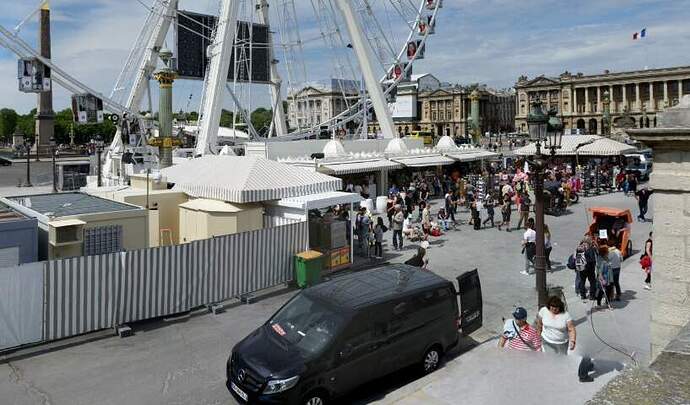 OOOPS ! It’s not the first time I come across mirrored Life images but this time I didn’t notice…I don’t live there…

The OOPS was perpetrated by Life, maybe intentionally maybe because of ignorance.
Good find in any case!

According to the narrator, the Panther did belong to the Panzer Lehr division…

Diomartin, Robin and H.P. thank you very much for the replies.